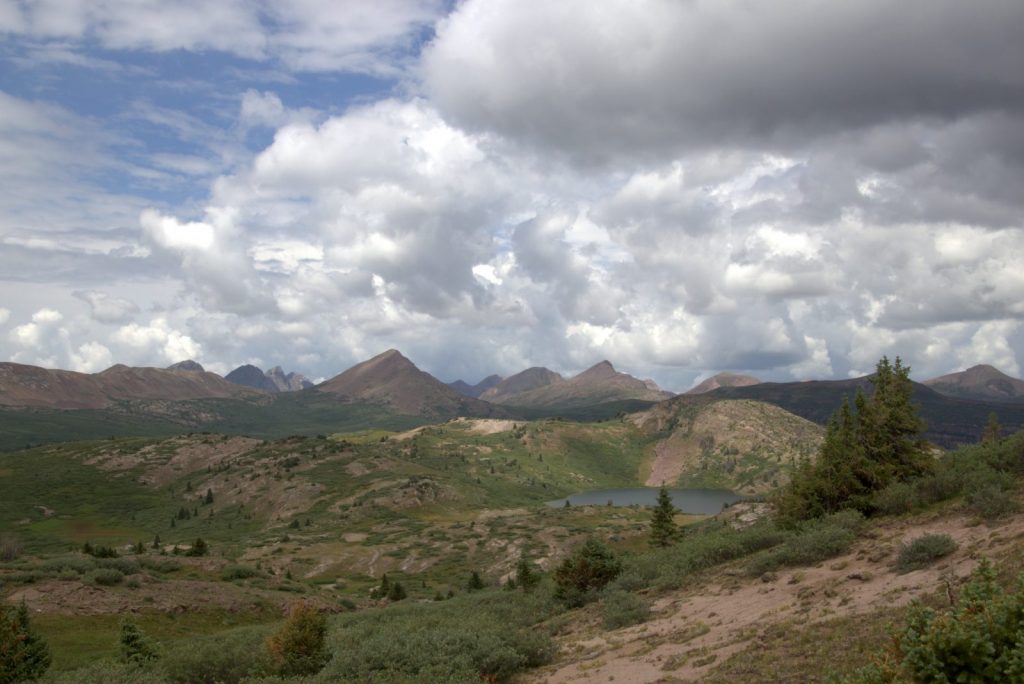 On July 11, Cheryl Ames, Heeja Yoo-Warren, and I started a backpack up the Ute Creek Trail in the Weminuche Wilderness.  It was sunny with clear skies but we had heard that the yearly monsoon would be coming in with strength over the next several days. At the start, we had to ford the Rio Grande River which was perhaps fifty feet wide and only up to the middle of my shins at the deepest.  The water was very cold.

We climbed up from the river through open terrain and in to the forest.  We hiked through healthy stands of Aspen but most of the evergreens were dead or dying from the pine beetle. According to an article by Daniel Strain in Science magazine, the populations of the beetle have exploded killing trees from New Mexico north into Canada. Jeffry Mitton, an evolutionary geneticist at the University of Boulder and his graduate student, Scott Ferenberg, discovered in the mountains above Boulder that the beetles are now out and laying eggs almost two months earlier than normal. Because of the longer reproductive season, the beetles produce an extra generation and many more individuals than in the past.  Because of this, most of the adult trees in the Weminuche are dead: yet another result of the changing climate. It is still a beautiful place, especially near the very long stretch of the Continental Divide running the length of the wilderness area.

After a mile through the forest, we found ourselves high on the side of the deep and wide, Ute Creek Canyon. For some time, trail was relatively level, climbing gently.  We passed a group of six people with a young dog.  I asked how old the dog was and they told me it was four months, which, of course, is too young for extended hikes but I didn’t say anything. They looked like they were having difficulty keeping the puppy on the trail. We never saw them higher on the trail.  There was a young couple from Snowmass, Colorado who we talked to repeatedly up the trail. They seemed to be enjoying the wild country immensely.

After some time, the trail descended to a large alluvial meadow at the bottom of the canyon.  The creek meandered and after we saw a beaver lodge the creek formed small ponds. After about a mile at the bottom of the canyon, we began to climb more steeply up switch backs.  We came upon the Snowmass couple watching a female moose grazing in the deep forest. Not long after, we arrived at Black Lake, a small lake in the forest, and a short distance later, we stepped out of the forest into a vast, open valley surrounded by peaks. We immediately came upon the intersection where the West Ute Trail separated and climbed into the mountains, and our trail became the Middle Ute Trail. After a short distance, we arrived at the junction with the East Ute Trail and began looking for a campsite. We camped on a rocky bench among some dead and doomed trees just above the confluence of Ute Creek and East Ute Creek. There had been clouds and periods of light rain during our hike, but at our camp in the evening, we enjoyed warm sun and clearing skies. 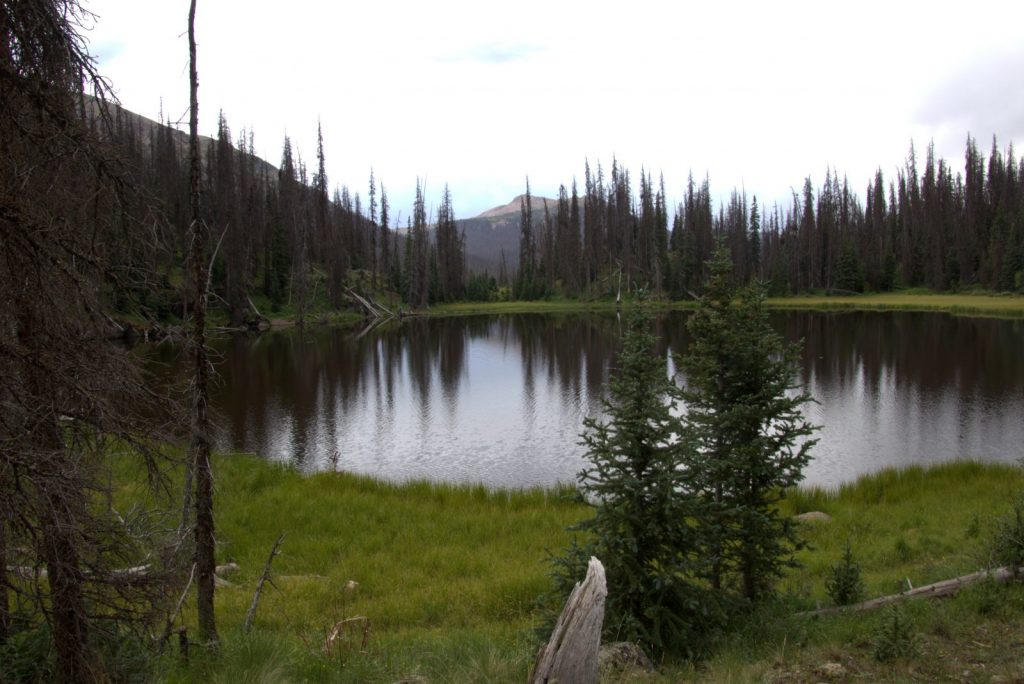 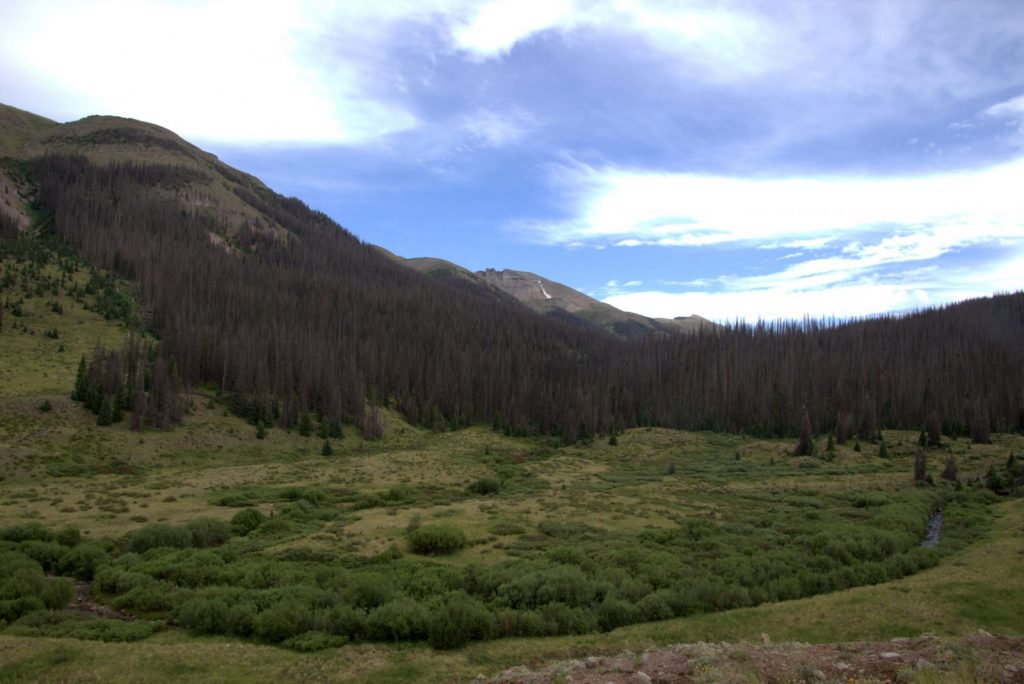 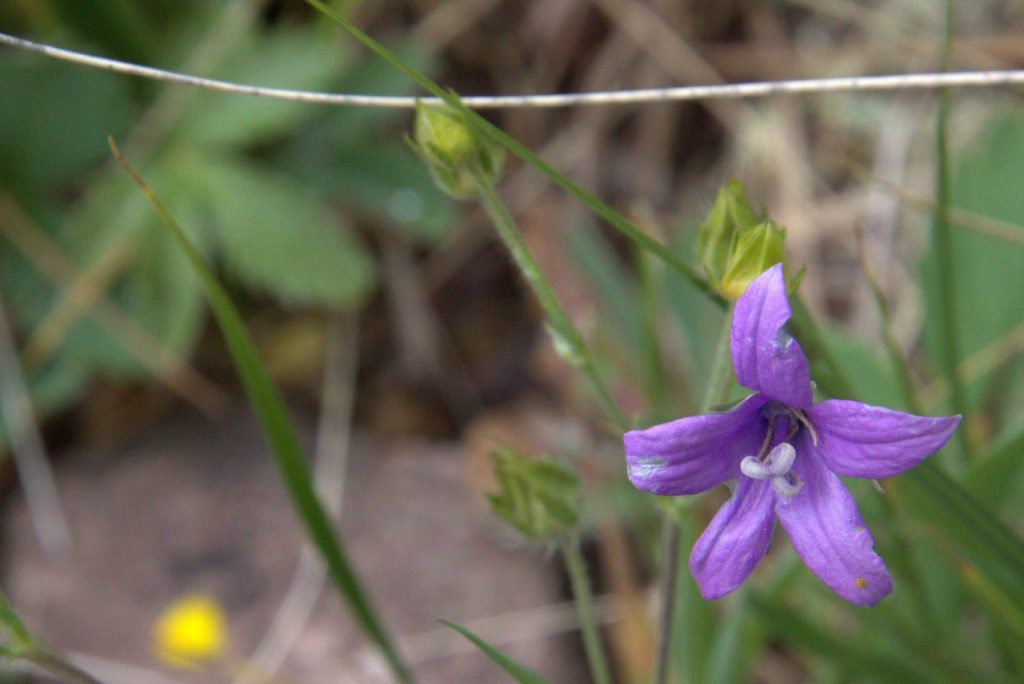 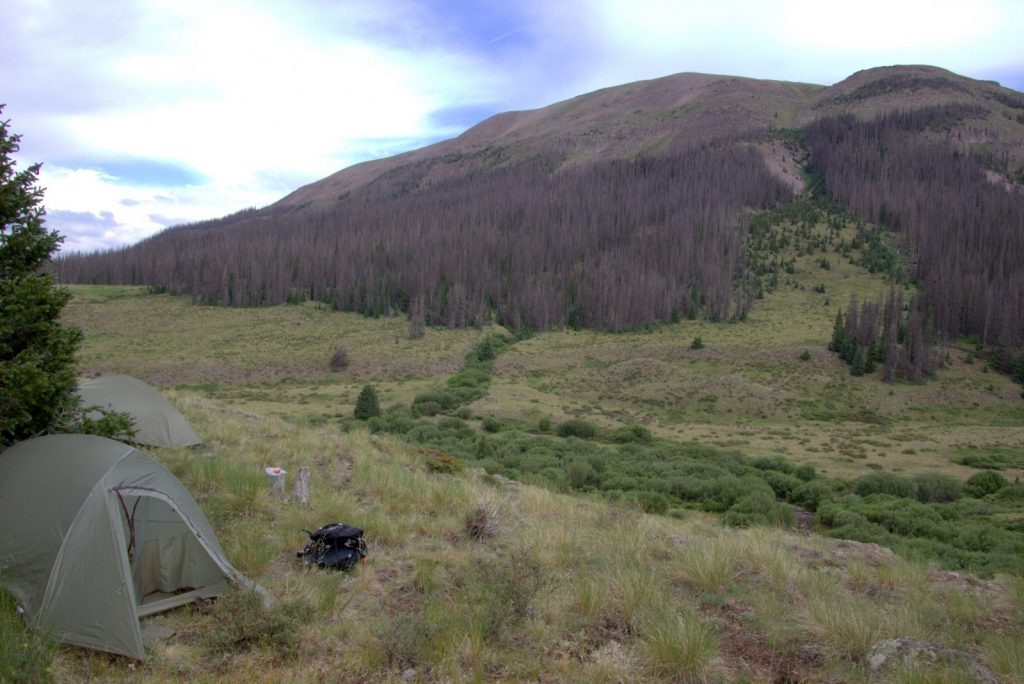 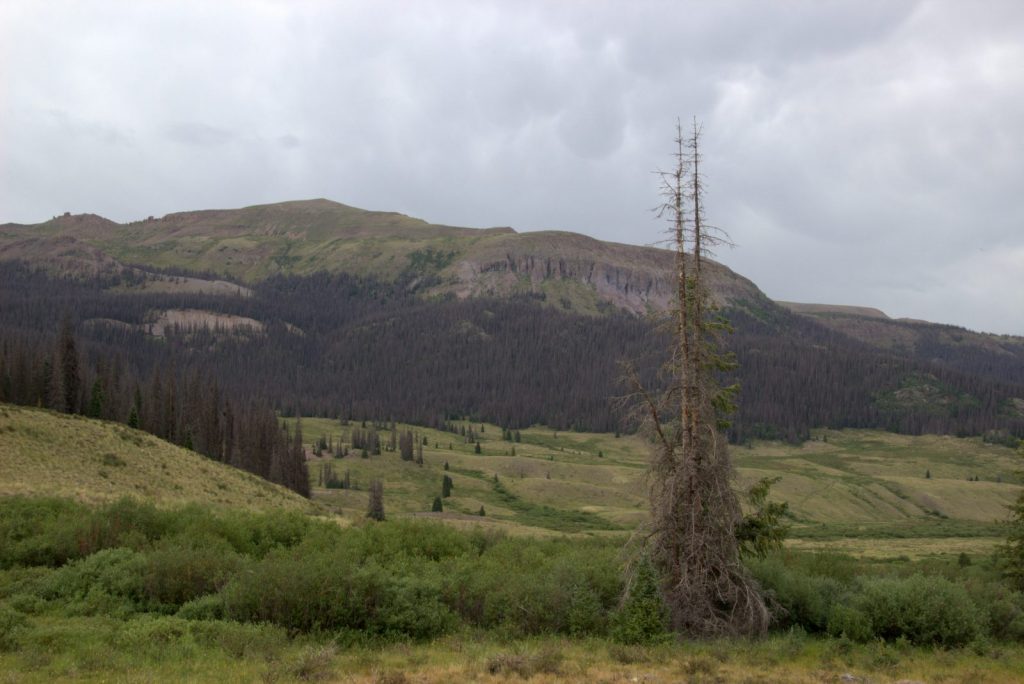 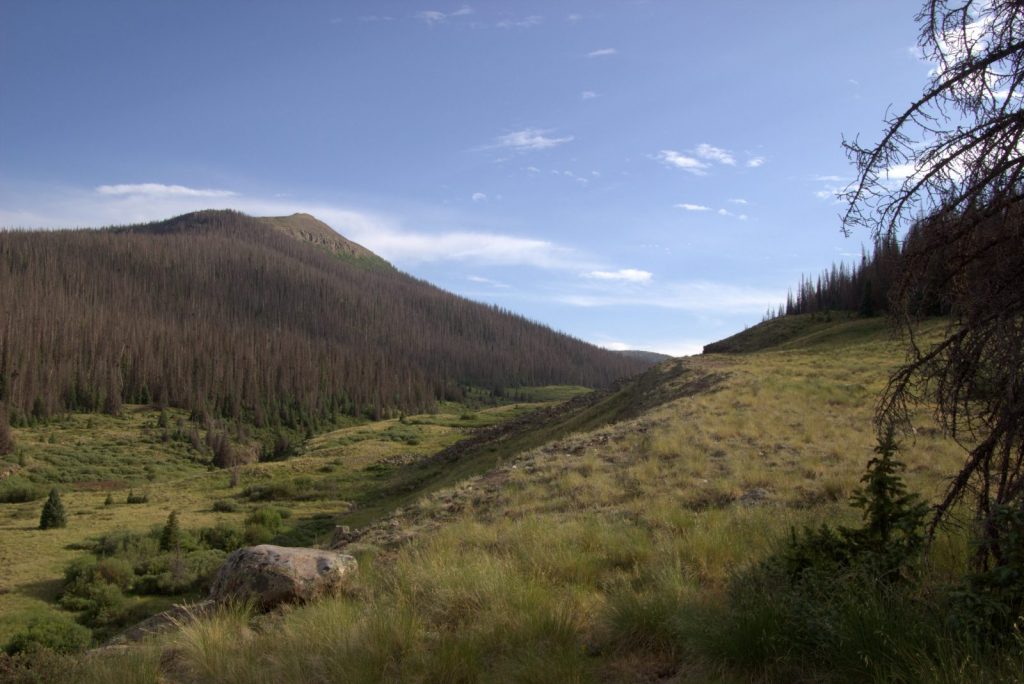 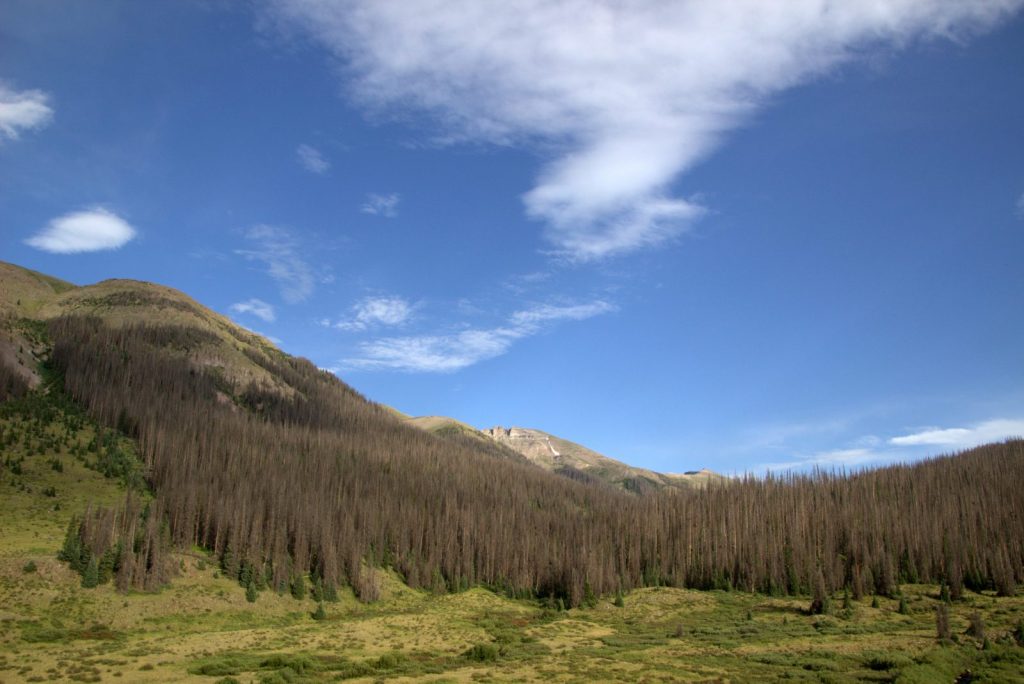 The next morning, we left at 7:30, hiking up the Middle Ute Creek Trail towards the Continental Divide under overcast skies. We had originally planned to pack up our camp and undertake a loop backpack up the trail to the Continental Divide Trail and then down the East Ute Creek Trail, but given the forecast for heavy storms, we decided to just leave our camp where it was and day hike to the Divide.  I had wondered if we were to see the well-known Rio Grande Pyramid with the Window formation next to it.  Not far from camp the Pyramid Peak loomed above us.  There was a tall rock wall on the ridge next to it with a large square gap shaped like a window.  We continued and soon saw a herd of thirty to forty elk below us on the other side of valley.  The herd included young elk and a large elk with antlers. 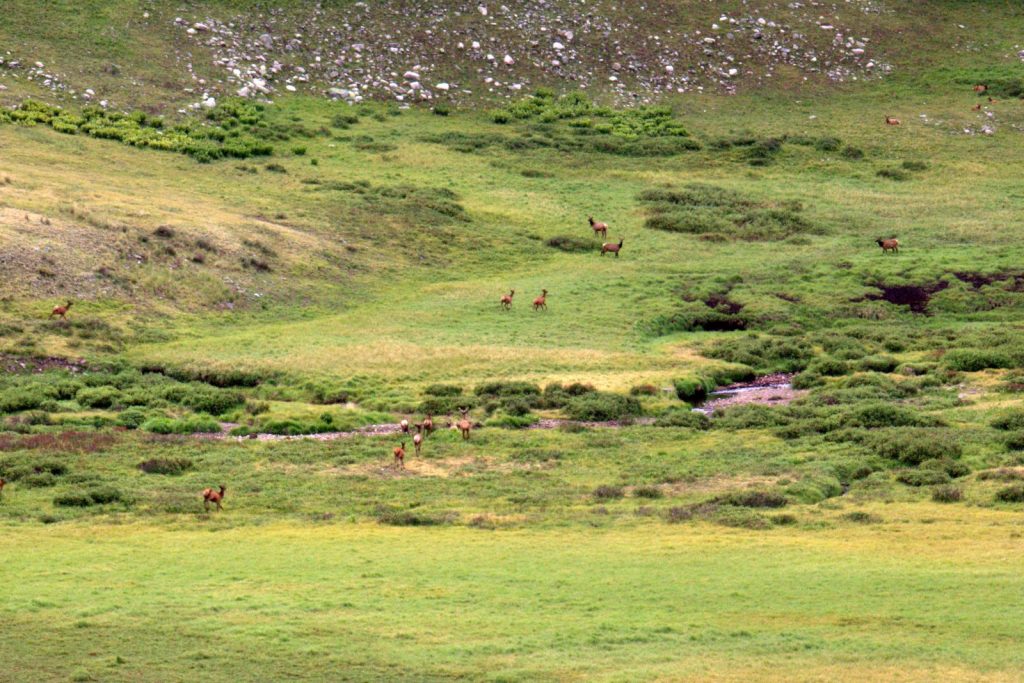 After a few more miles, we came to a stream crossing deep in the willows with an intersecting trail going off in two directions.  In each direction there was a pole with a vertical carving telling us that the trail was the Continental Divide Trail.  Both Heeja and Cheryl were surprised to come upon the CDT in this manner, and I asked them whether we should go to Mexico or Canada.  We decided to head towards Mexico. We climbed up through an area of dying forest and then through tall willow bushes tightly lining the trail. We soon came upon Twin Lakes, two large lakes set in a flat, wet area. As we continued to climb, the scenery became increasingly open and rugged with expansive scenery containing mountains and the ridge top of the Continental Divide. After climbing to a low area on the Divide, we saw mirror-like Ute Lake below us. The lake was almost two hundred feet below us in a steep sided basin. 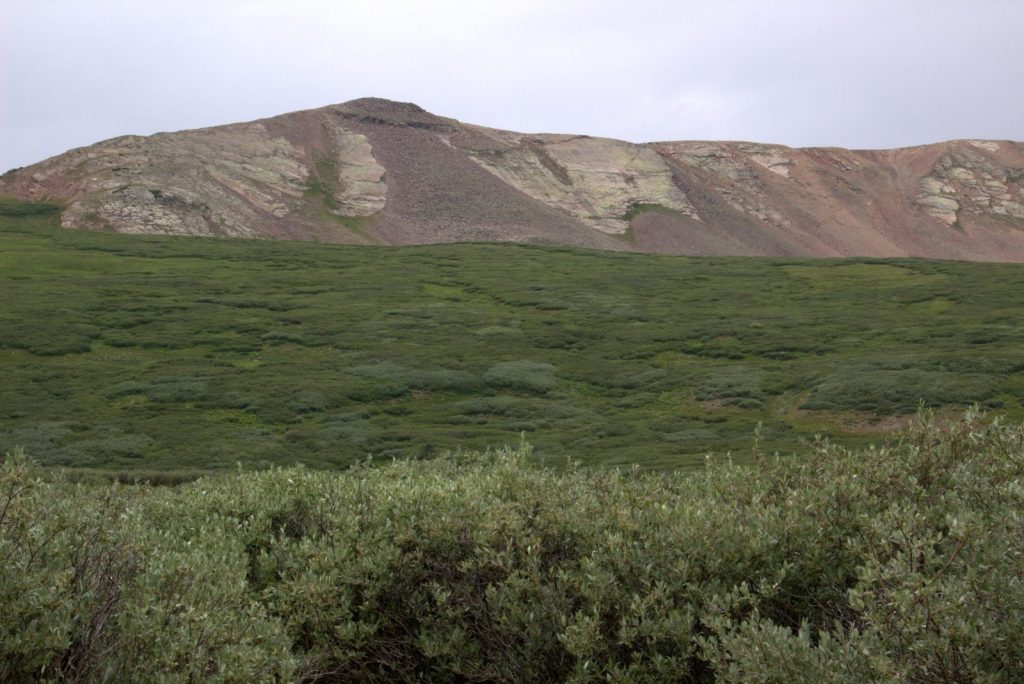 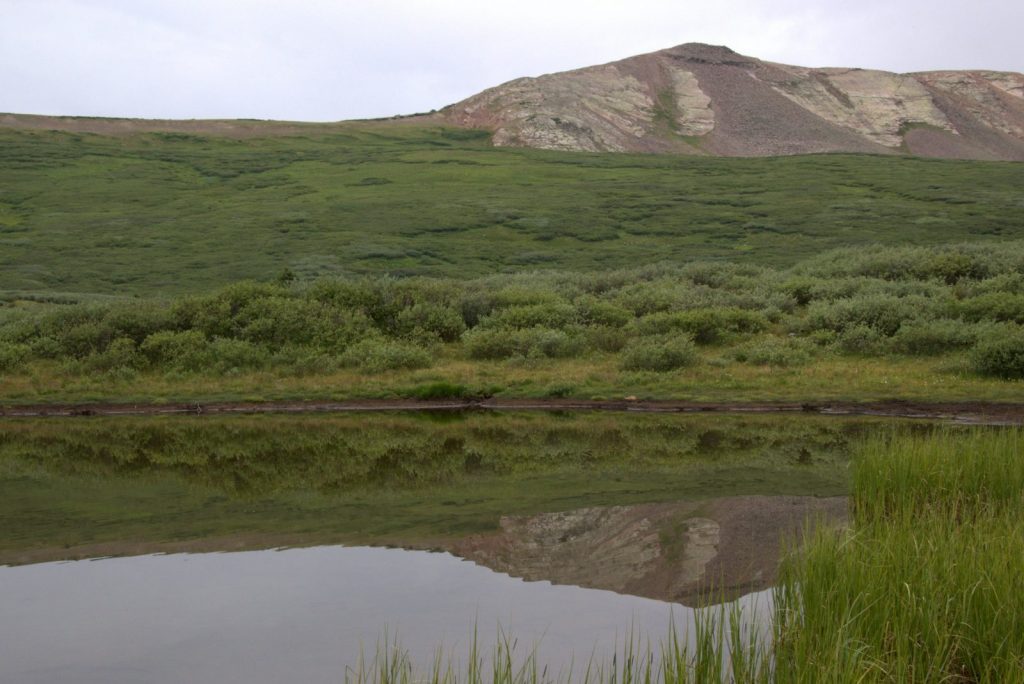 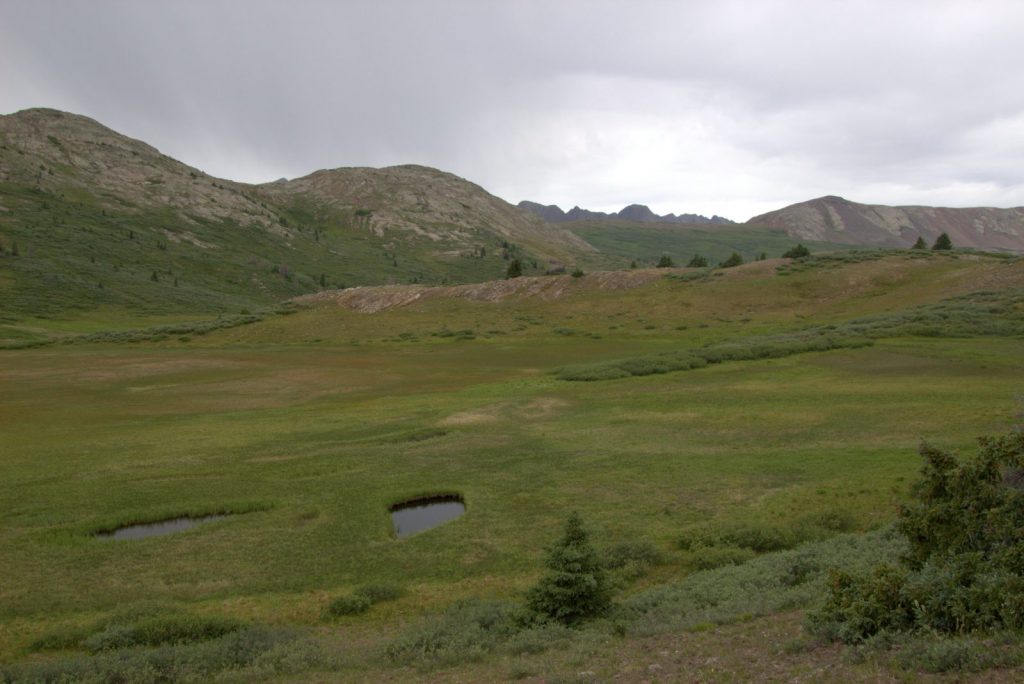 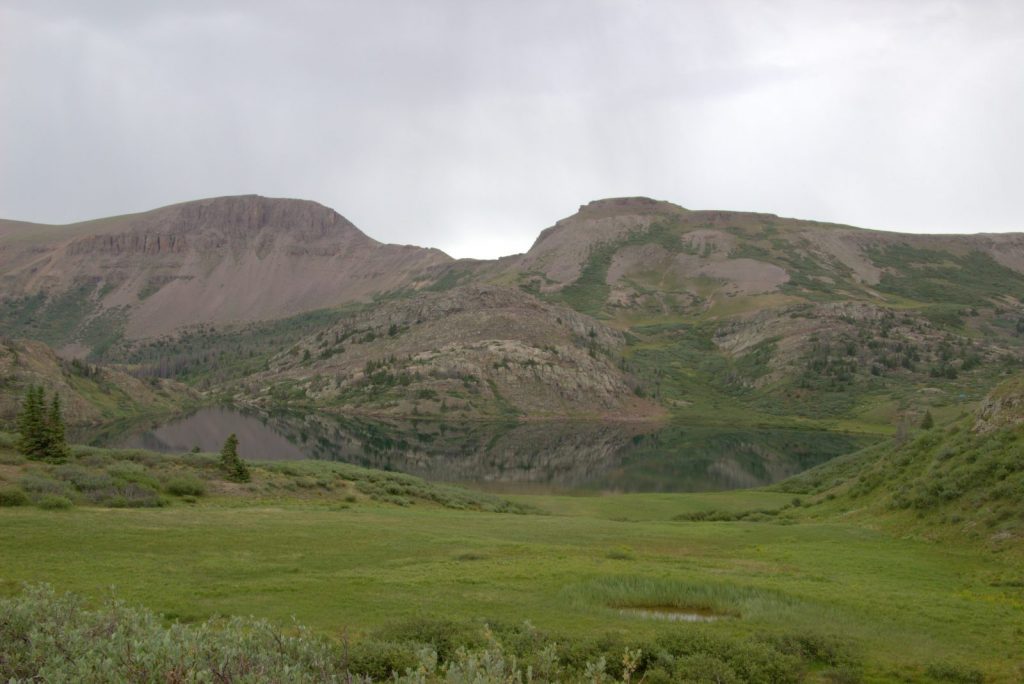 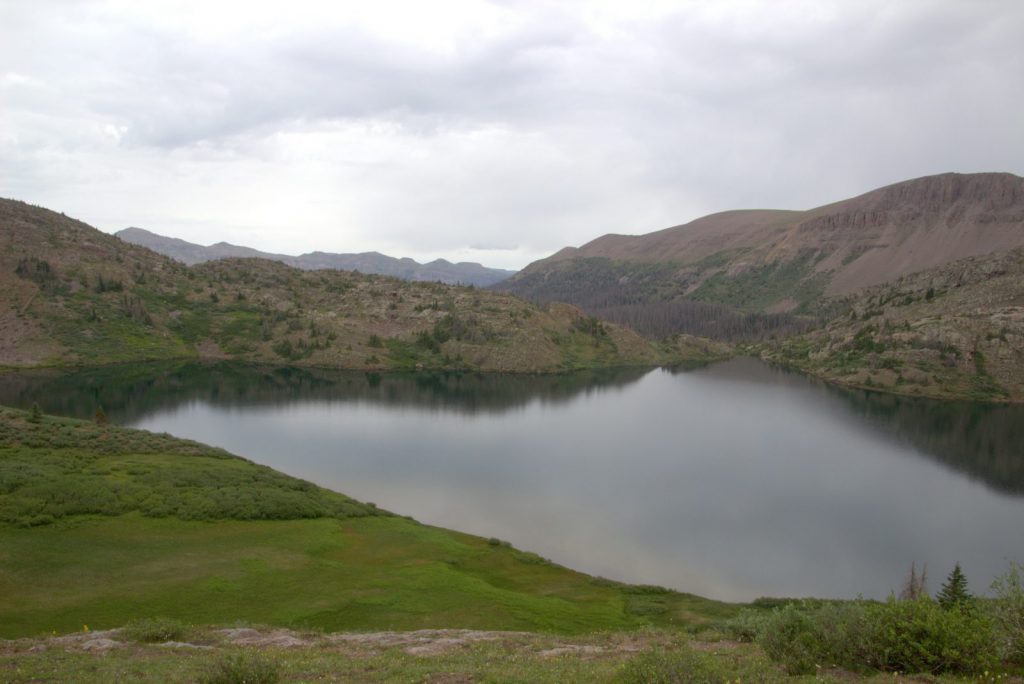 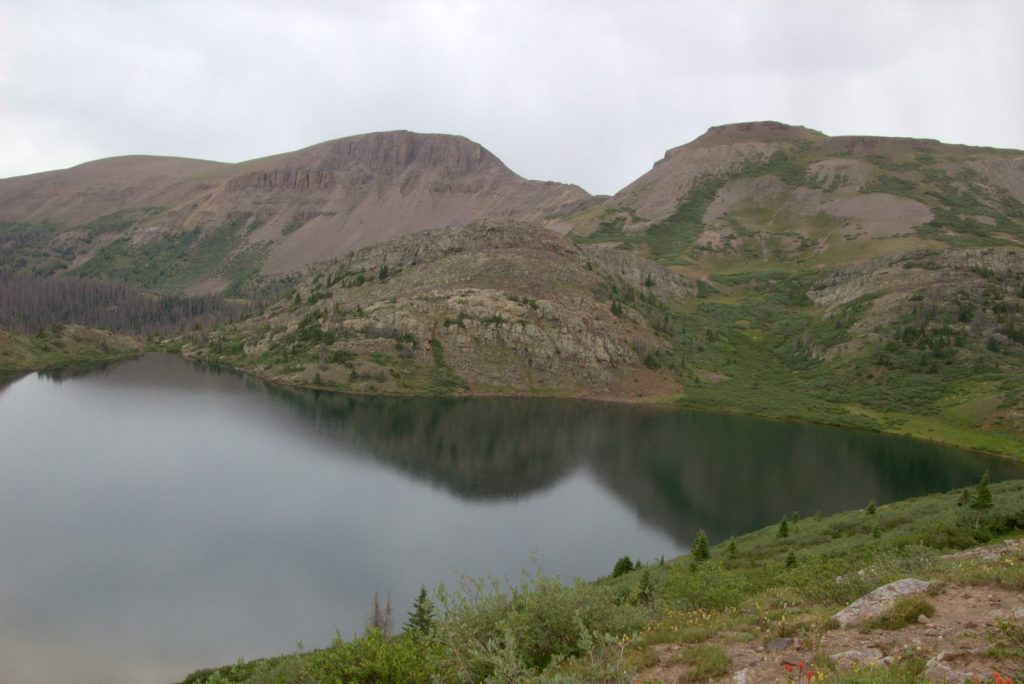 We had decided to return to the Middle Ute Creek Trail via the Ute Lake Trail, and above the lake it took us some time to determine how to find the Ute Lake Trail.  Cheryl walked towards the lake and found a camp with lamas but no trail. We decided that we needed to continue on the CDT until we found the intersection with the Lake Trail.  I could hear the little pikas squeaking and spotted one among the rocks. We began to climb on the trail, higher and higher, and when I checked the GPS, I saw we had passed the intersection.  As we climbed, we hadn’t noticed patches of blue sky appear among the magnificently broken clouds. Heeja led us back down a short distance and found the unmarked intersection with Ute Lake Trail.  As we climbed on the Lake Trail, we were far above tree line and could see a large portion of the Weminuche Wilderness area. We could see many high peaks in the distance with Ute Lake and Flint Lake below. From there we were viewing the high peaks above Chicago Basin, and we were seeing the Needle Range. We became positively giddy with the breathtaking scenery around us. 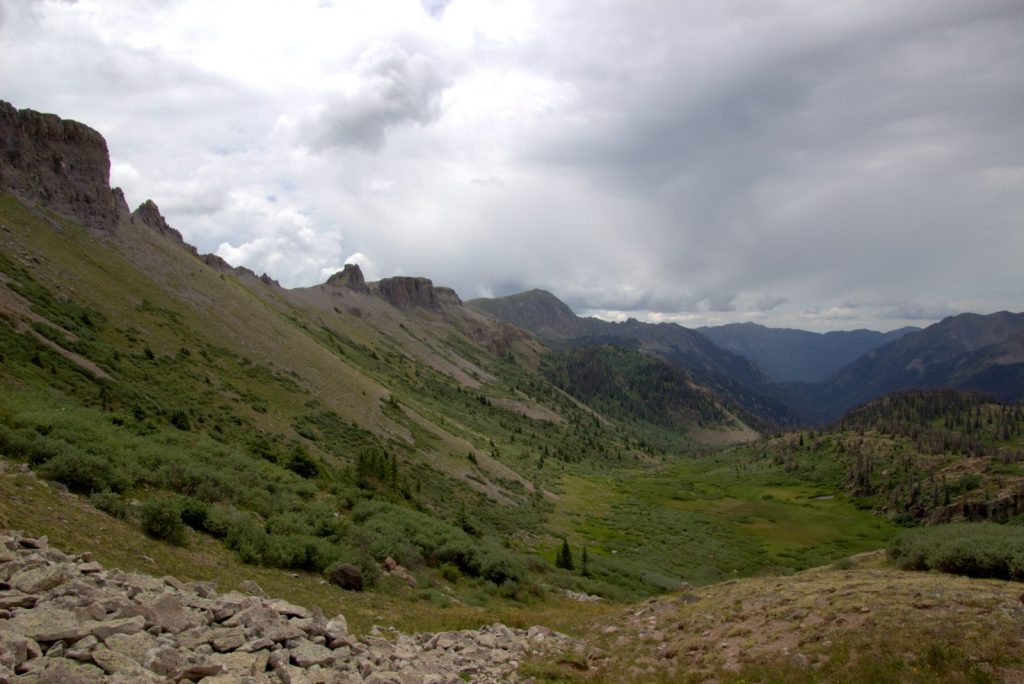 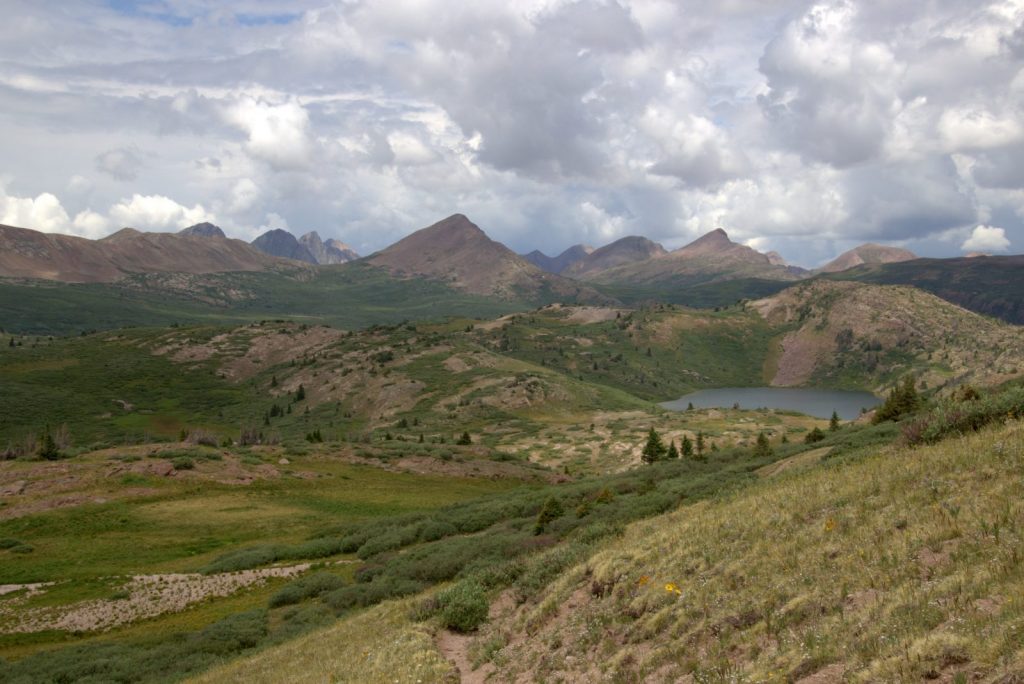 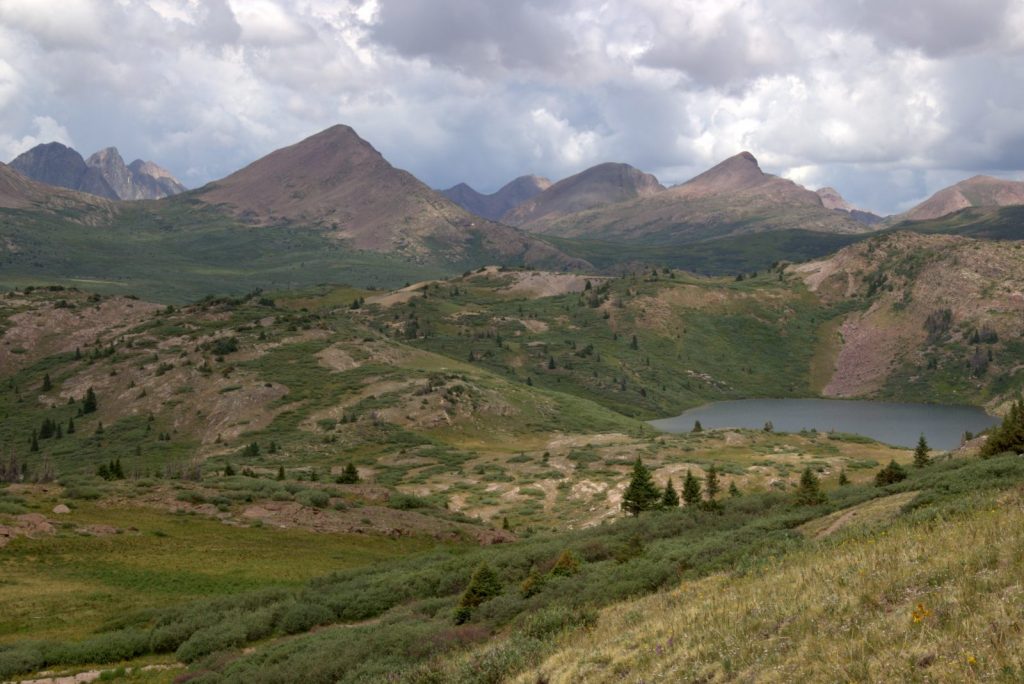 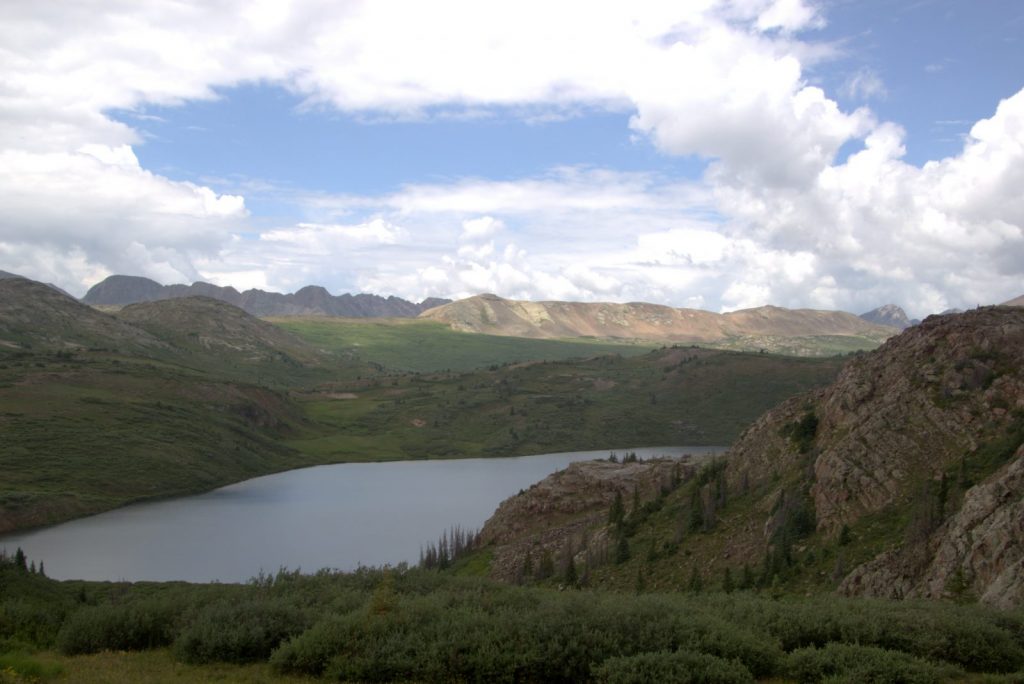 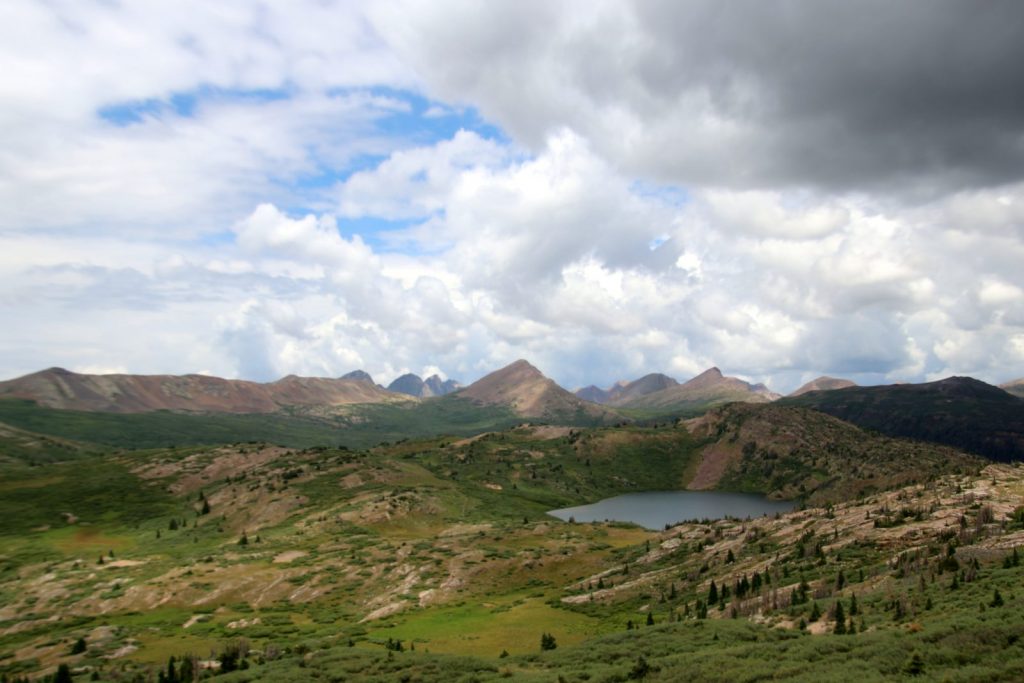 As we reached the point where we were to begin descending back into the Ute Creek Valley, it began to rain and hail heavily. We put on our rain shells and descended steeply down the increasingly soggy alpine meadows. The rain did not end until we were almost down in the valley.  It rained off and on as we followed the Ute Creek Trail to our camp. Back in camp, the sun came out and it became quite warm for a couple of hours. While we prepared dinner, we saw a female moose and her young one in the willows along the creek below our camp. We retired to our tents early and in a little while it began to rain steadily. 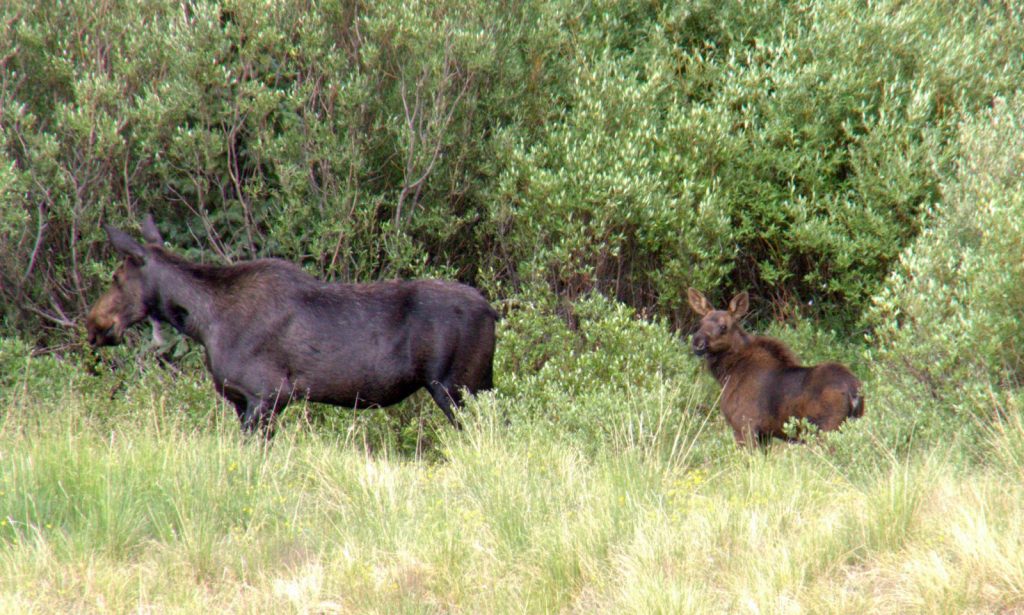 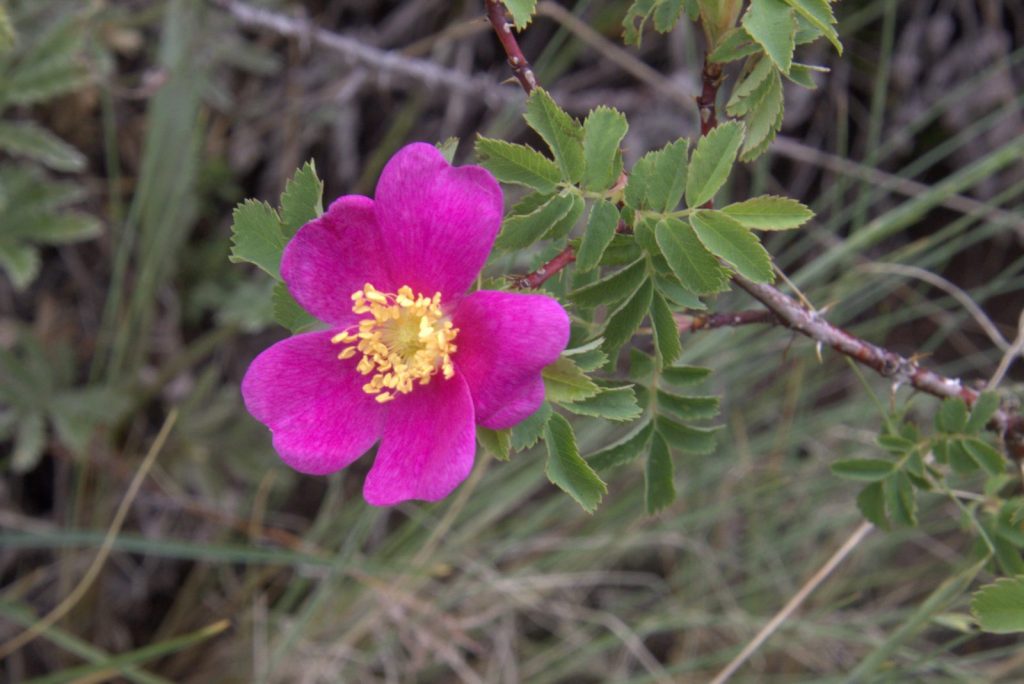 On our third morning, we packed up camp and began to hike back to the trailhead. In camp and on the trail, we talked about many subjects including hiking and other pursuits and the political situation.  We talked a great deal about music.  When we got back to the meadow in the canyon bottom, there was a female moose in one of the beaver ponds, sticking her head in the water to eat the aquatic vegetation. As we hiked lower, it became quite warm with swarming flies.  If you stopped for too long, they would bite you.  At the bottom, we forded the river and were back at the car. We were all thrilled with our experience in this very wild, very beautiful place. 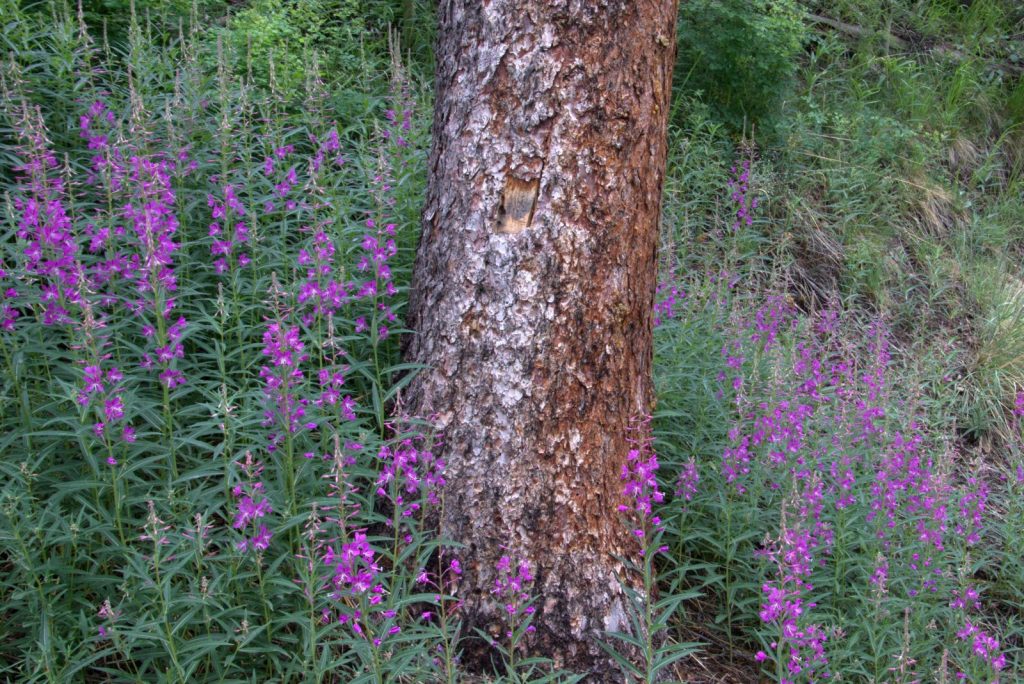 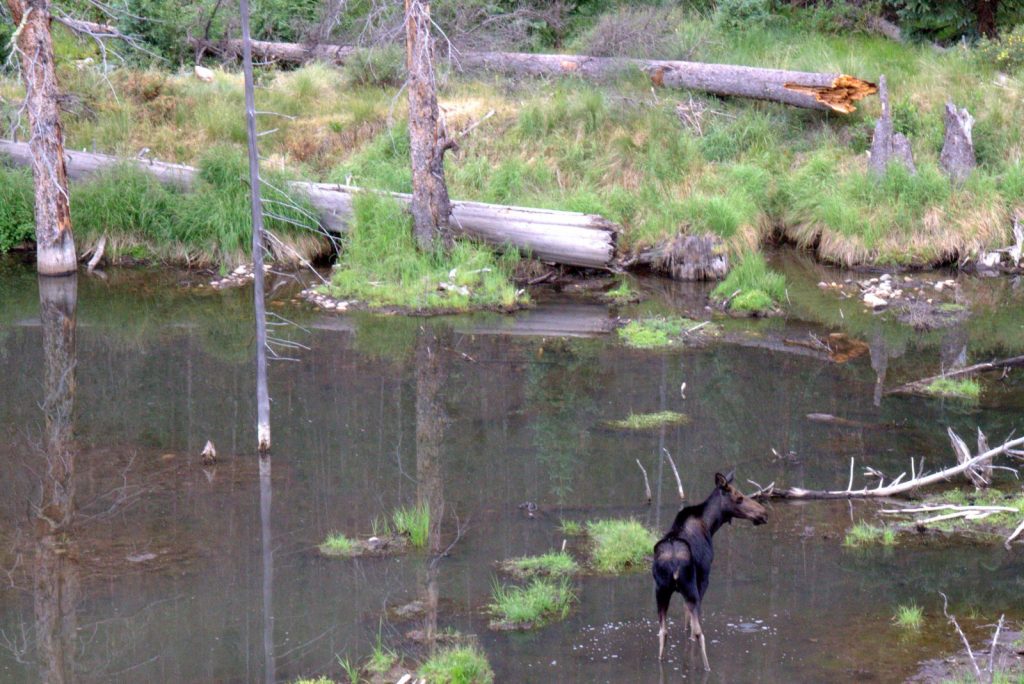 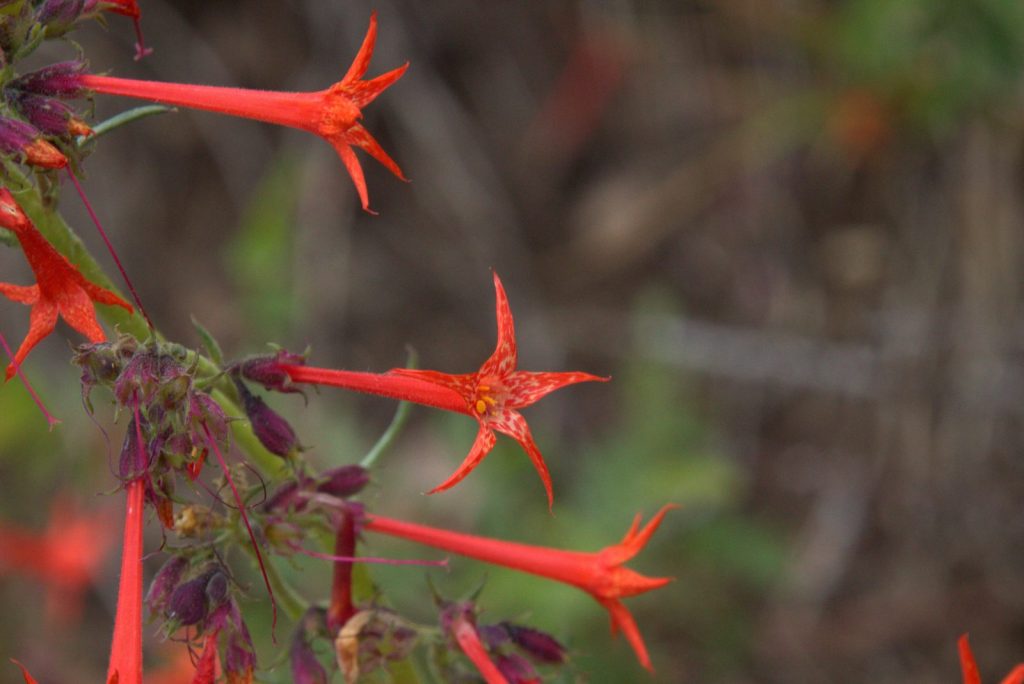 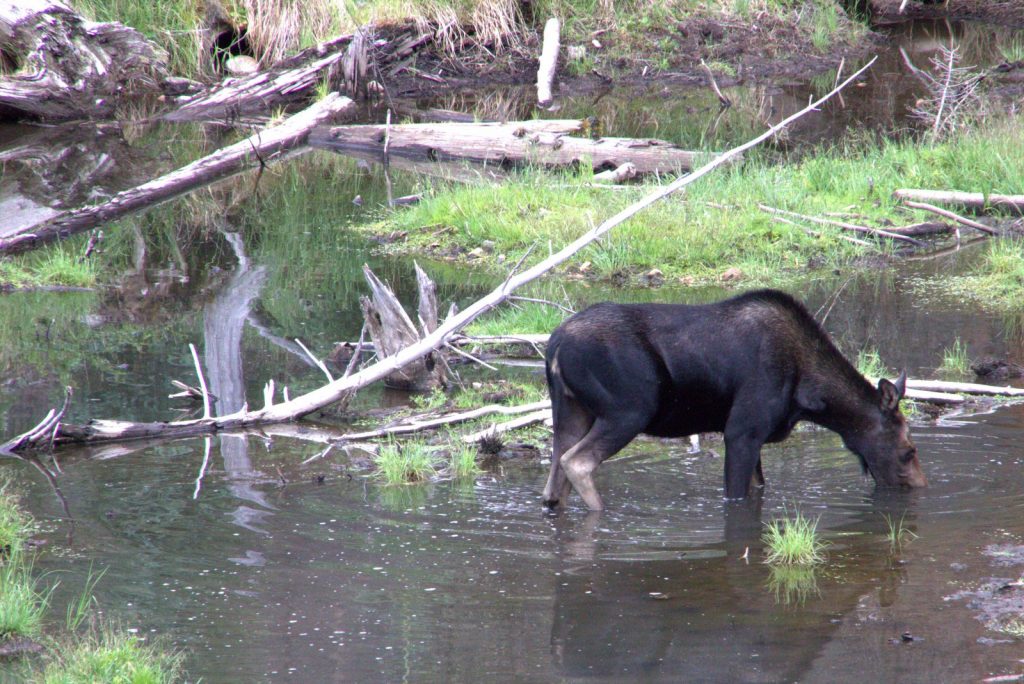 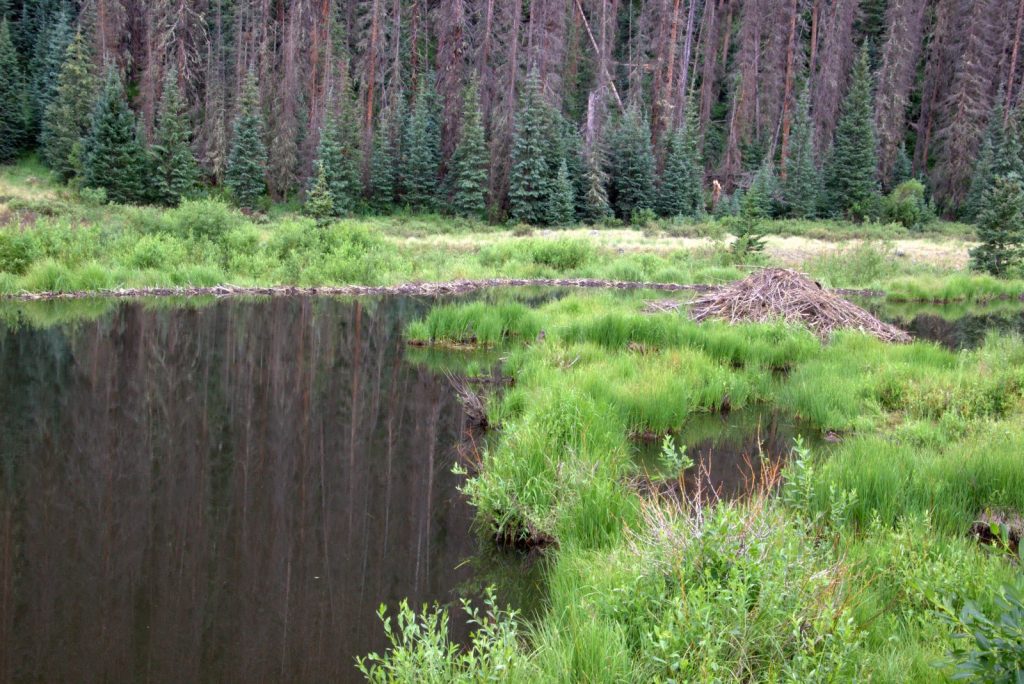 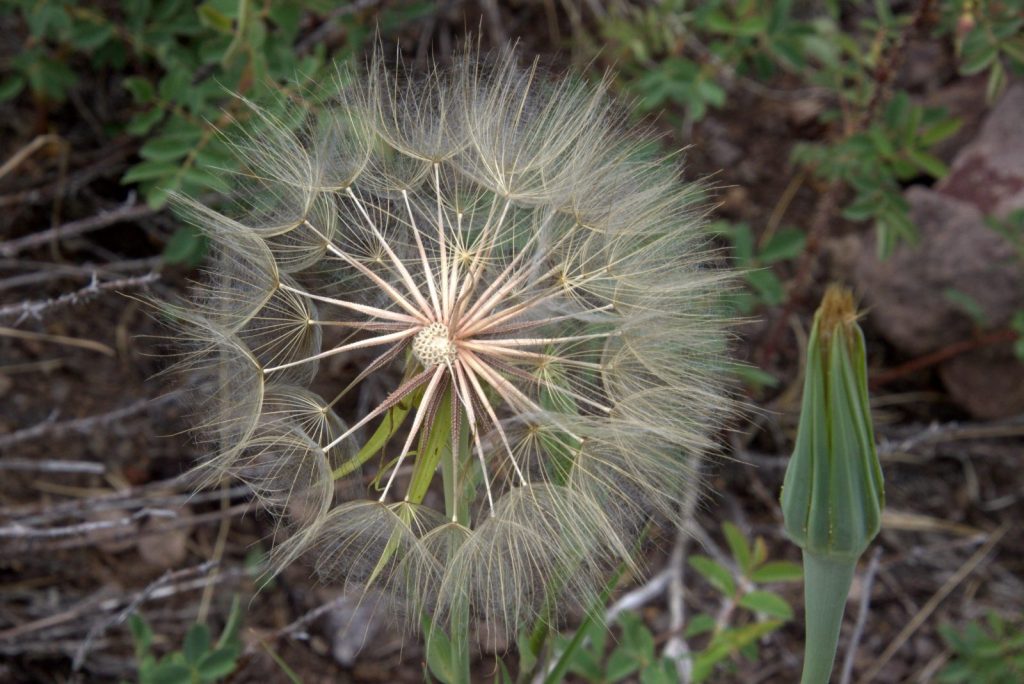 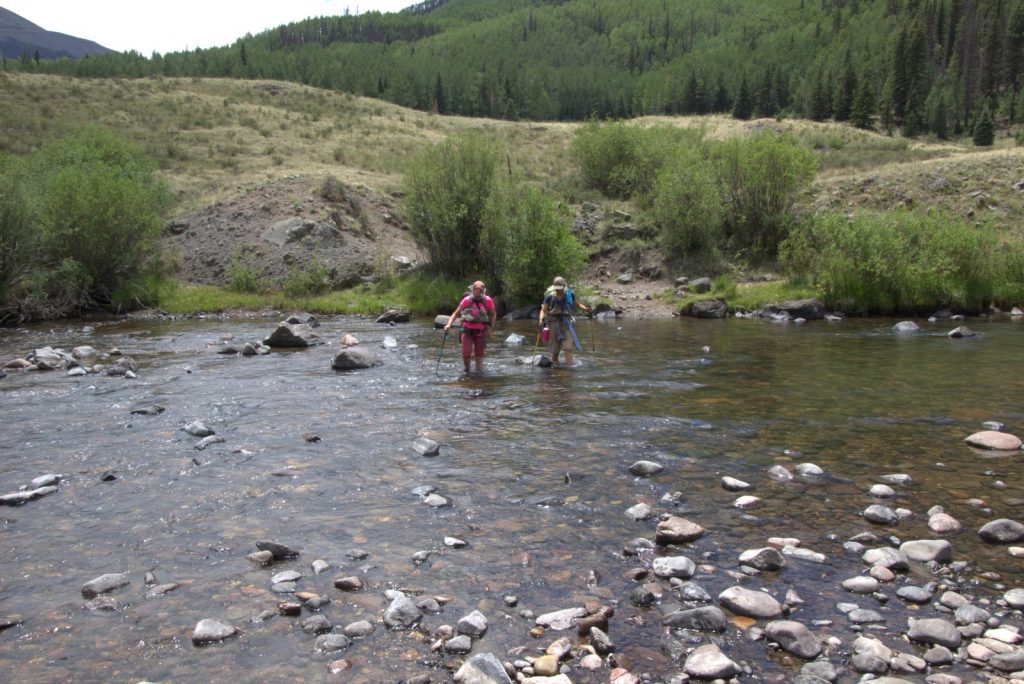