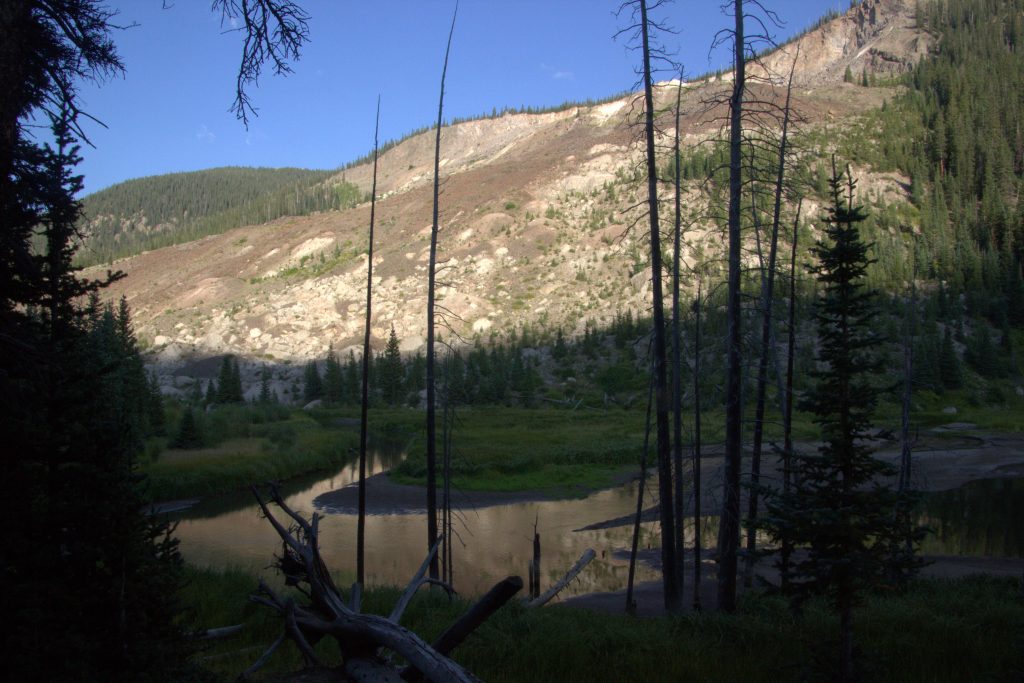 It is evening and I am half way up the canyon trail in a quiet and still camping spot in the forest, across the Big Blue Creek from the remnants of an old landslide, 1,000 feet tall. The creek is backed up by the landslide, creating wide, flat braids in the Creek that are silent and reflective of the evening light. The burbling sound is of a small stream, running by my camp into the Creek.

I started up the Big Blue Trail at 2:00 pm. I had had a slight tightness in my right calf for a couple of weeks and going around a muddy spot, churned by the horse outfitters, I stepped on a tiny evergreen sapling, which acted like a spring, sending sharp pain up my calf.  After that, I limped for a half an hour until I found the campsite. It was 5:00 pm and too late to turn back, and so, I decided to rest and decide what to do in the morning. 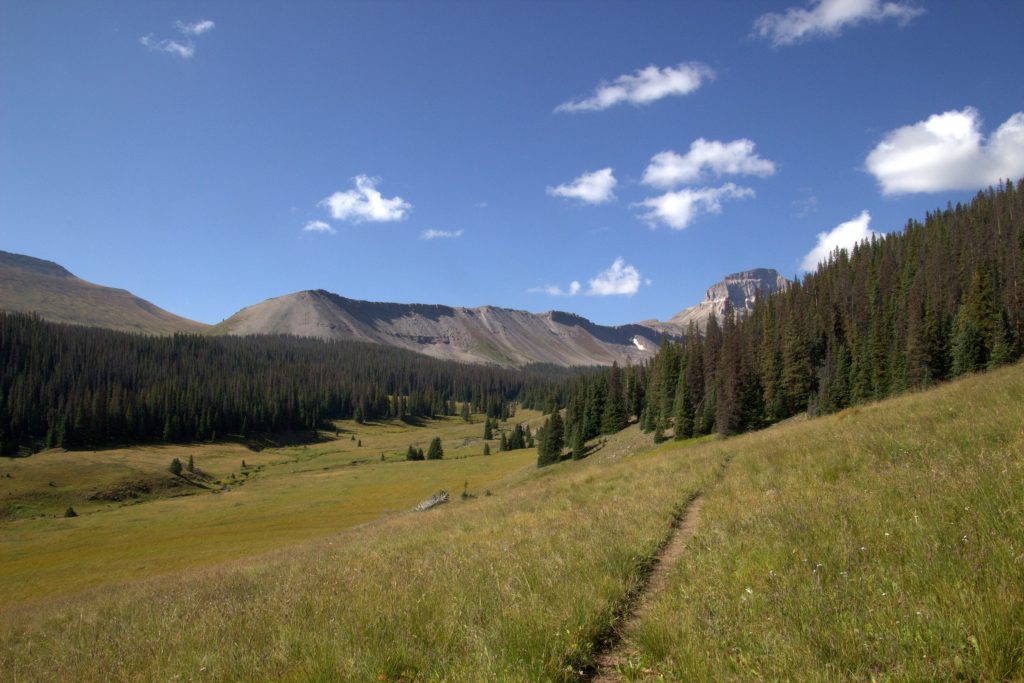 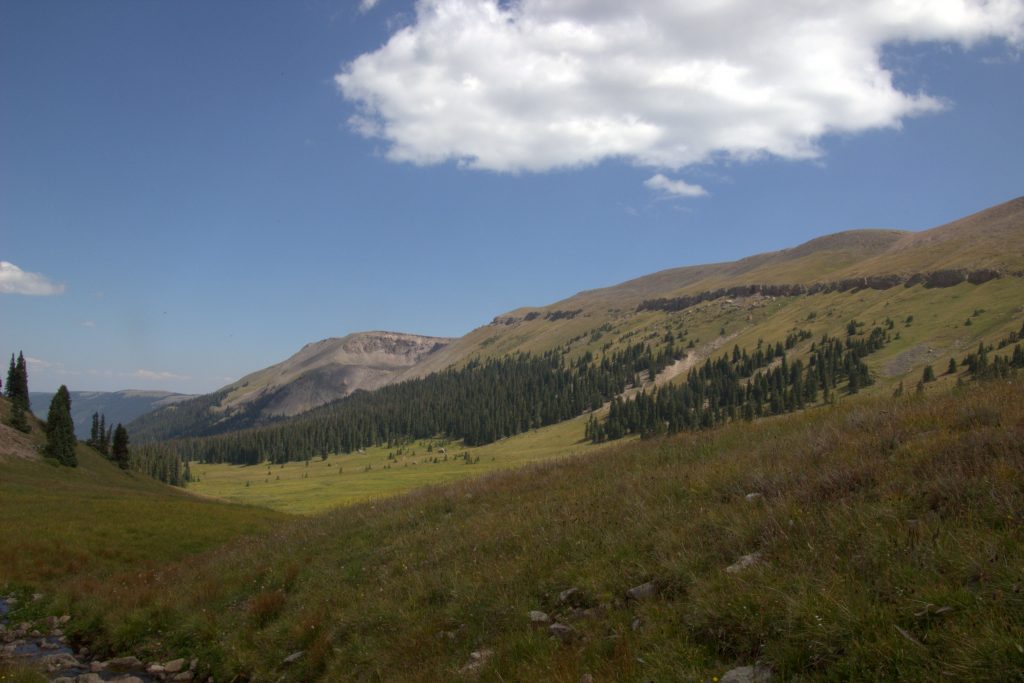 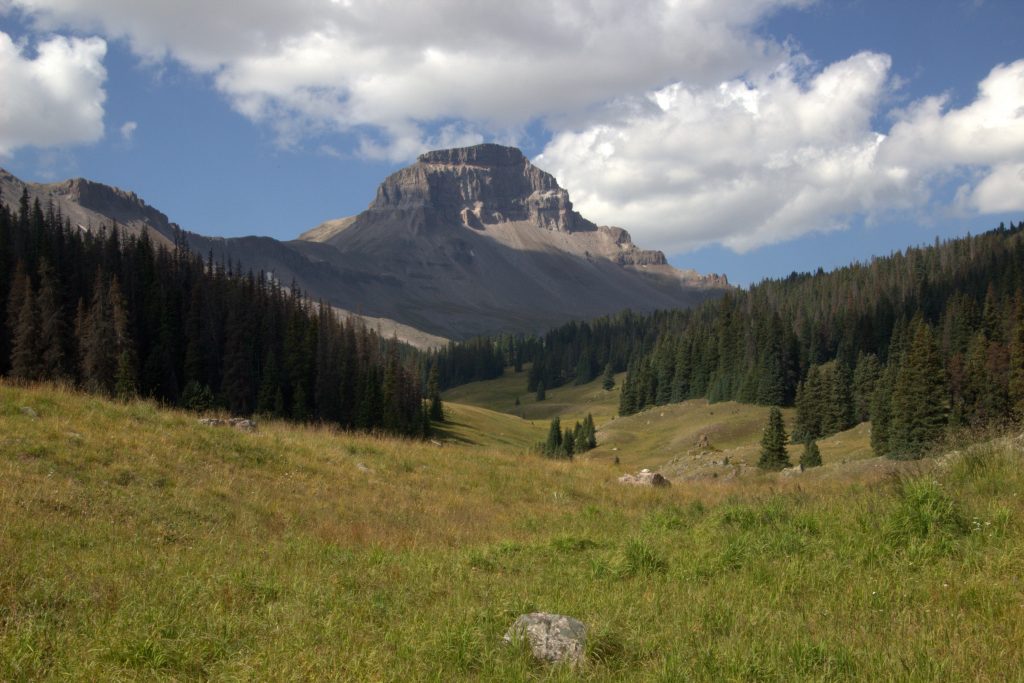 The next morning I felt better and my calf improved during my long, second day of hiking. At 7:30 am, I continued hiking up the valley, and a couple miles on, I discovered a wonderful, up-valley view of Uncompahgre Peak, its square, wedding-cake shape dominating the meadows and forests. After that, the ascent became steeper, hotter, and more difficult.  After another hour, I left the trees behind and climbed up the final section of canyon into alpine terrain. Ascending, I followed a stream towards the saddle above me, and where I saw that the stream was dry, I went down to where there was still water and filled all my containers.  There would be no water above me. 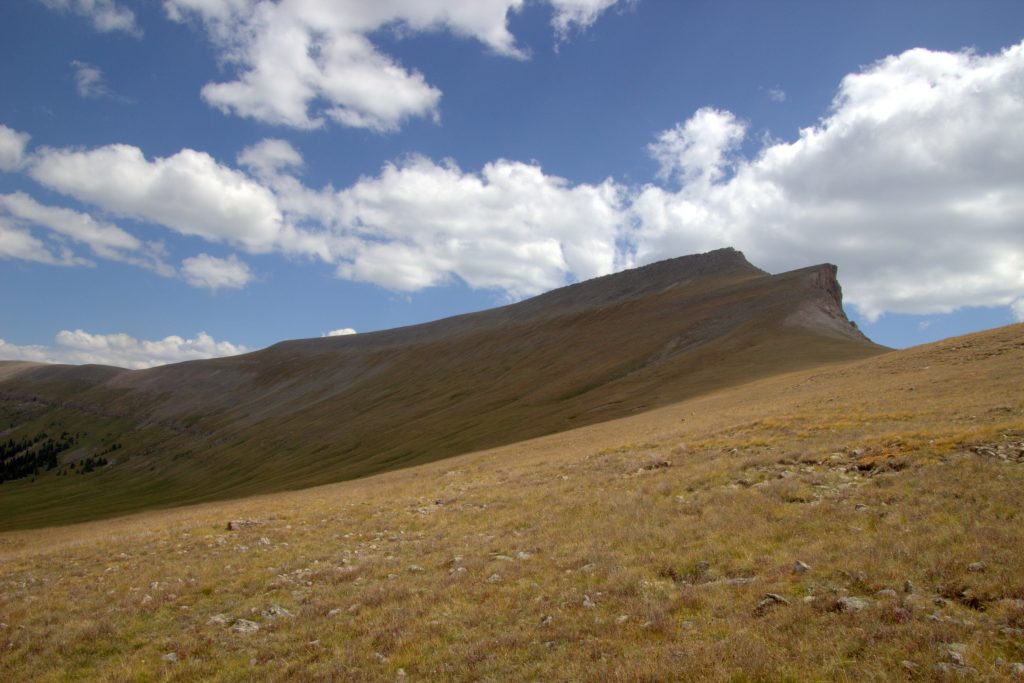 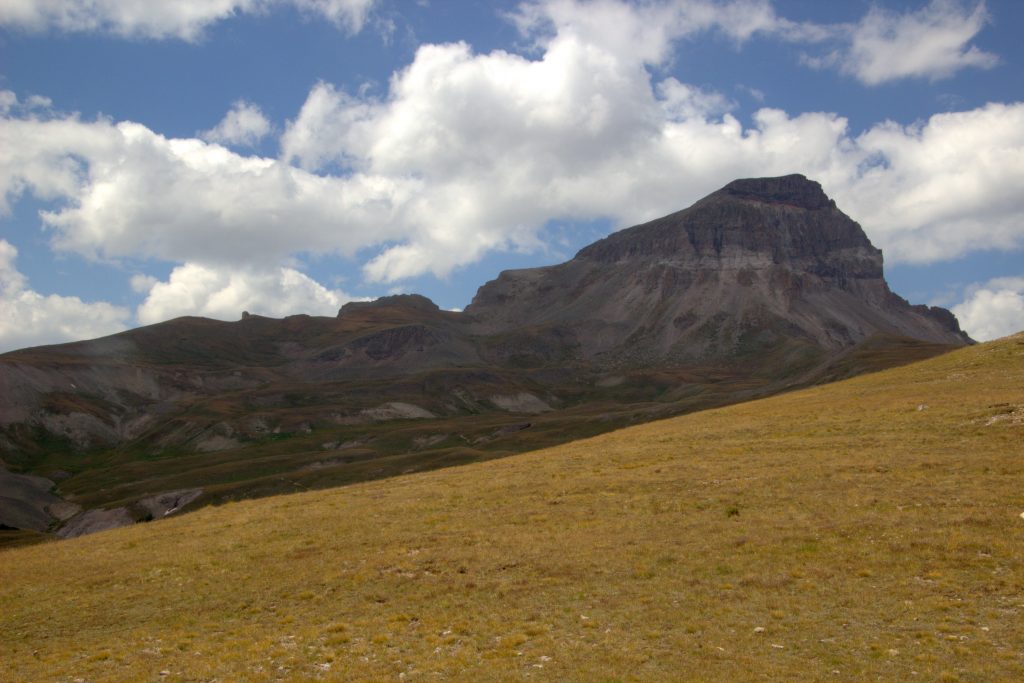 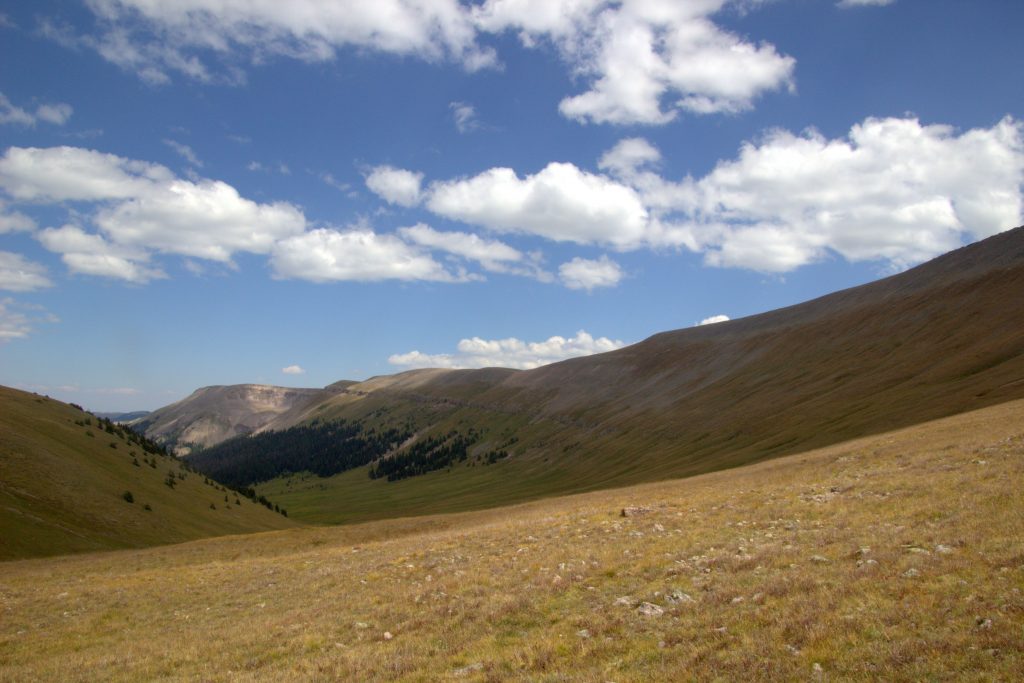 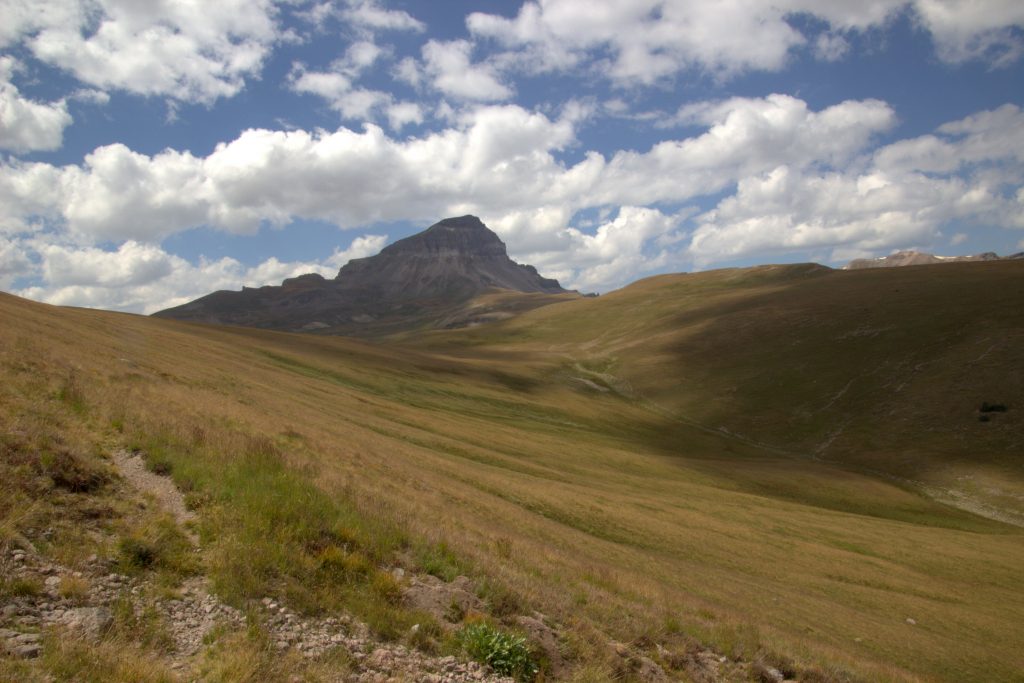 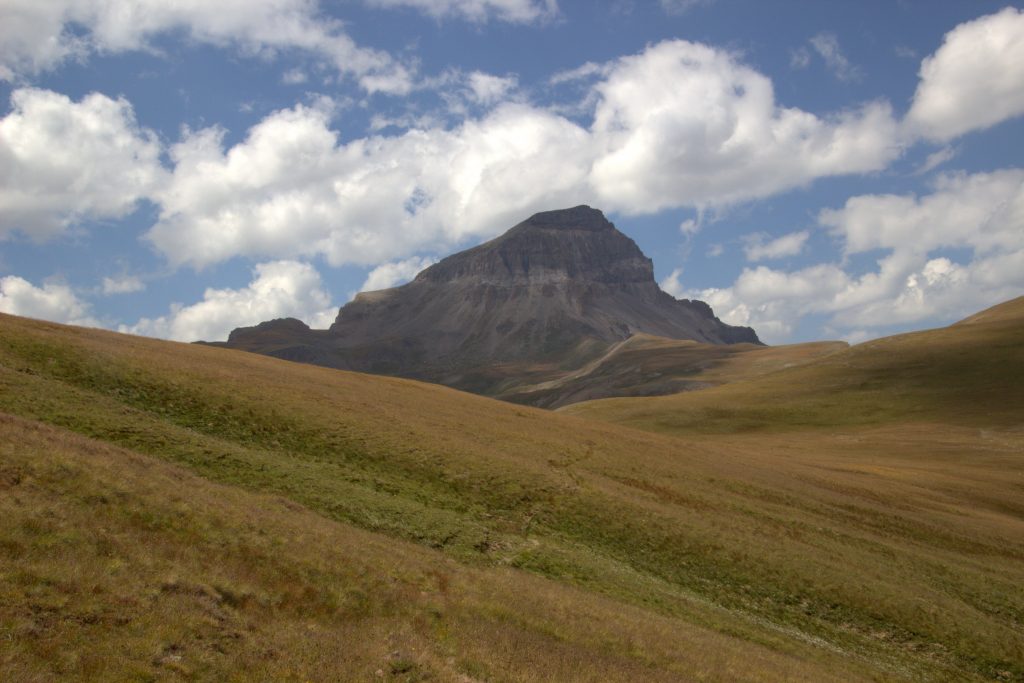 On the saddle, there were more grand views of Uncompahgre Peak to the west and of the surrounding ridges and mountains. On the saddle, I made a hairpin turn, back to the south, on the Ridge Stock Driveway traversing up the side of the eastern ridge above the valley at a straight, vertical angle.  The views from this ascent back to the peak and across to the western ridge were varied in shape and color and truly astounding. The top of the ridge was a very wide, treeless place of rolling terrain with a floor of rocks and short grass. At the top, there was a large cairn, carefully built from small stones, and there were never-ending views in all directions. I would find similar cairns on knolls all along this path, characteristic of these areas where men on horseback with dogs, drive their sheep. The trail was very faint and difficult in this open place, and I often resorted to my GPS to stay on what passed for a path. 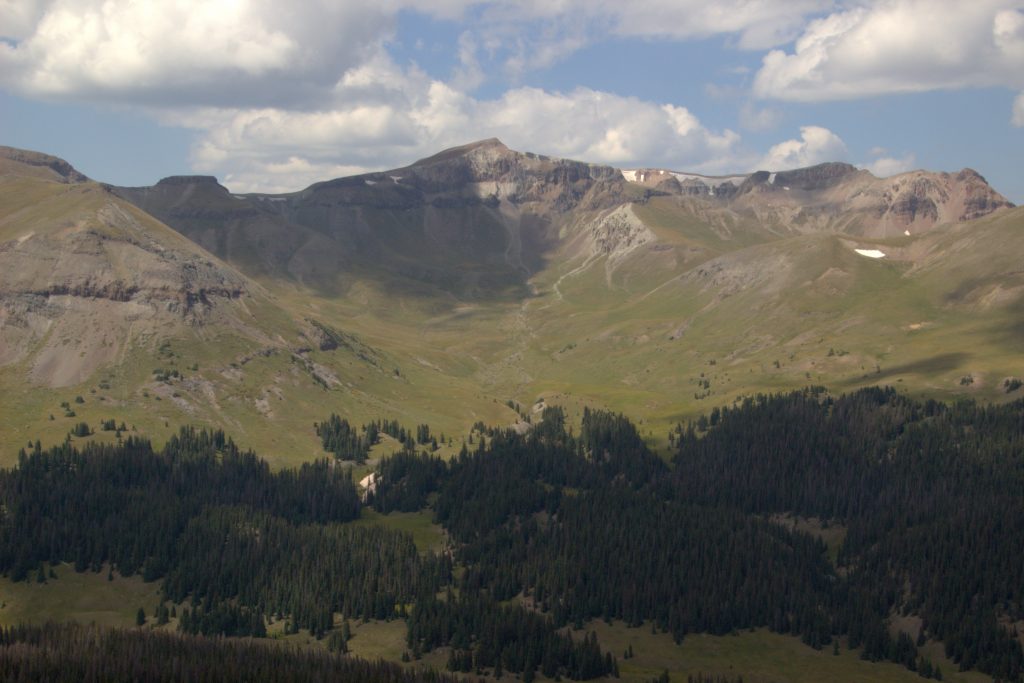 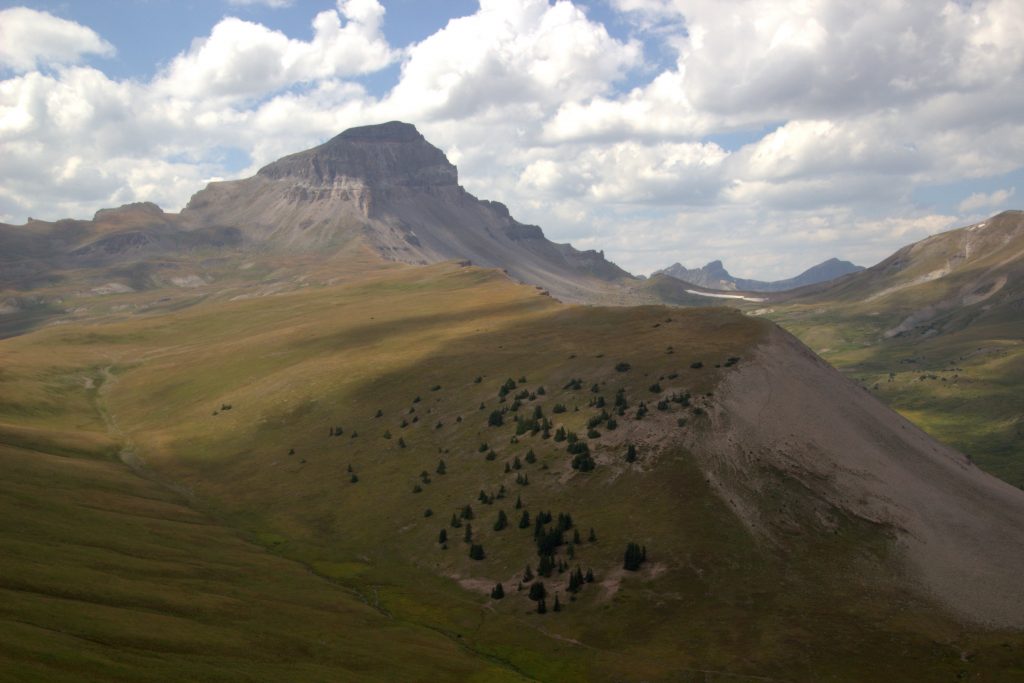 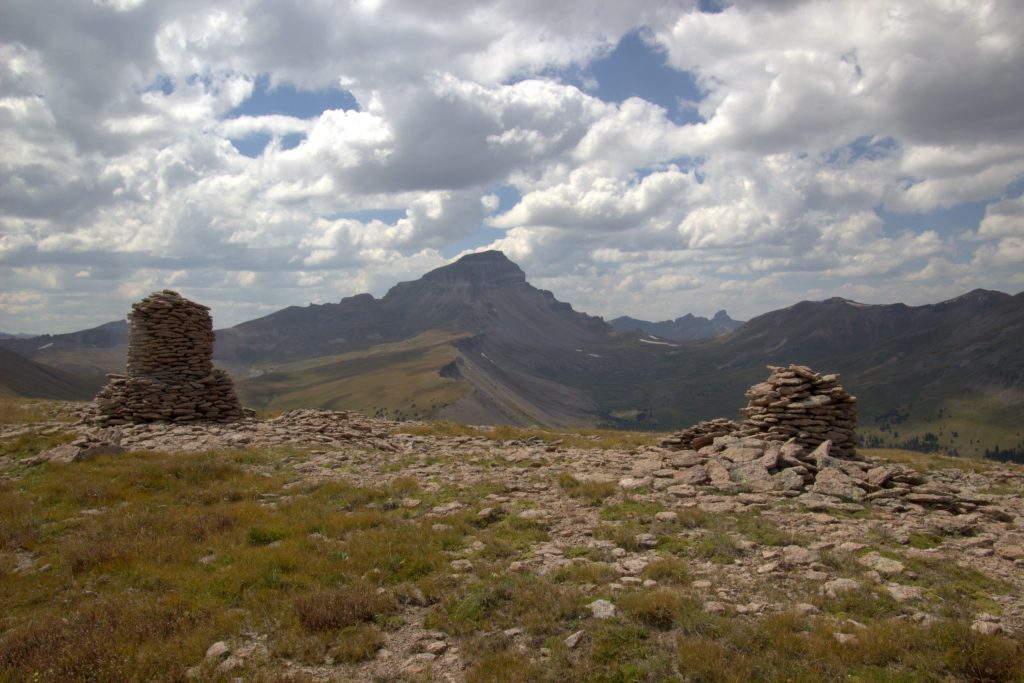 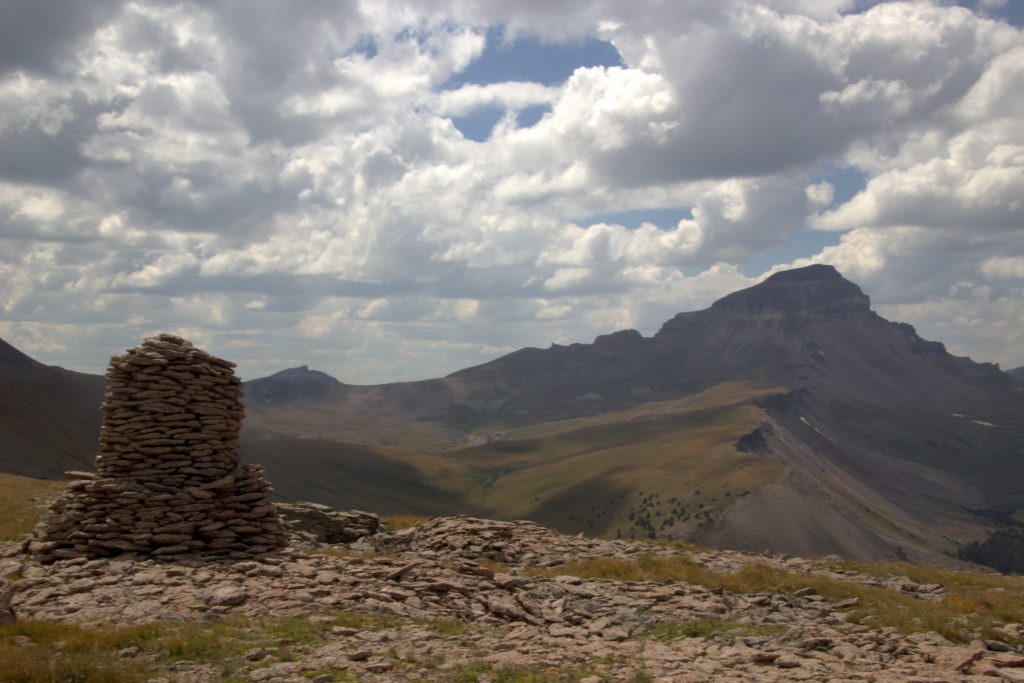 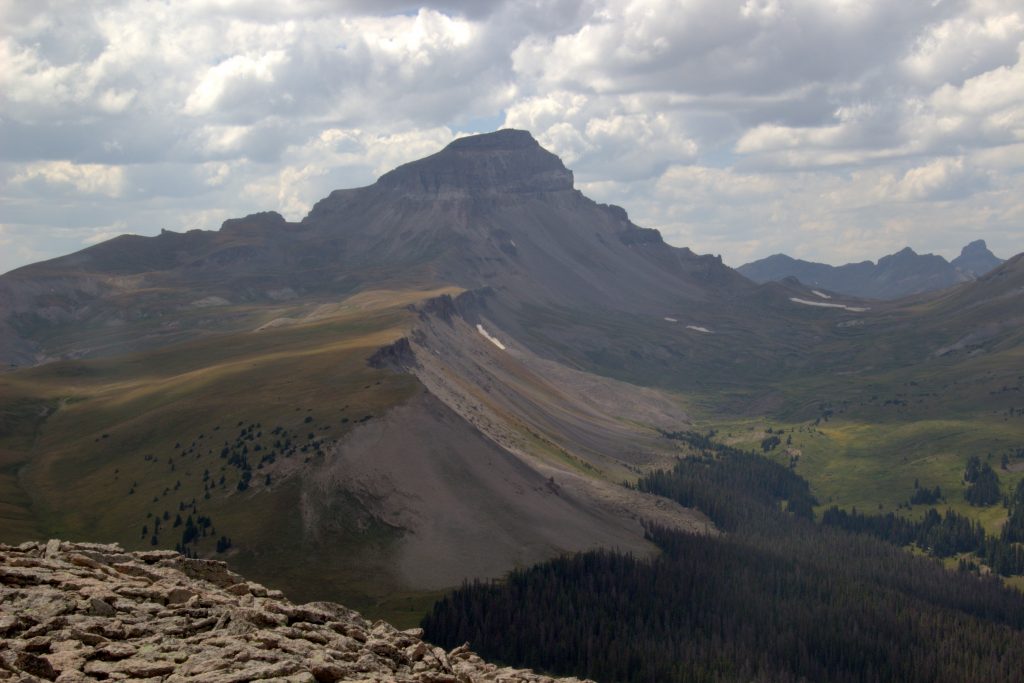 The views back to Uncompahgre Peak continued from this high place but changed dramatically as I continued away from the mountain, but now I also had views of the vast distances to the north and east. Later in the afternoon, I hiked over one hill after another, until around 4:00 pm, I started thinking about finding a campsite. I thought about camping on a high open saddle, but the clouds were gathering and turning dark to the south. So I climbed over the last three knolls and down to the first trees I had found in this high place. I camped on the edge of a large meadow with trees around me. There was thunder in the distance in a couple of directions, but the storm stayed above the peaks and never got to my camp. Sitting at camp, watching lightning over the distant peaks to the east, I heard a coyote yelping and then saw him cross the meadow in front of me. The evening was wonderful at this high camp with towering clouds, mountains and ridges, and a colorful sunset. 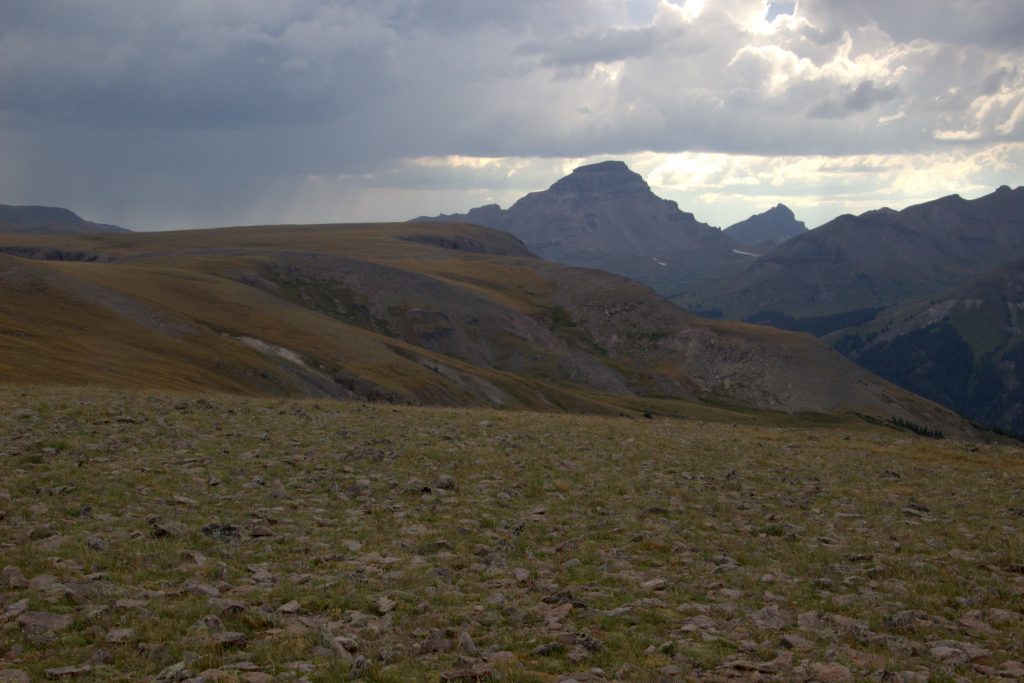 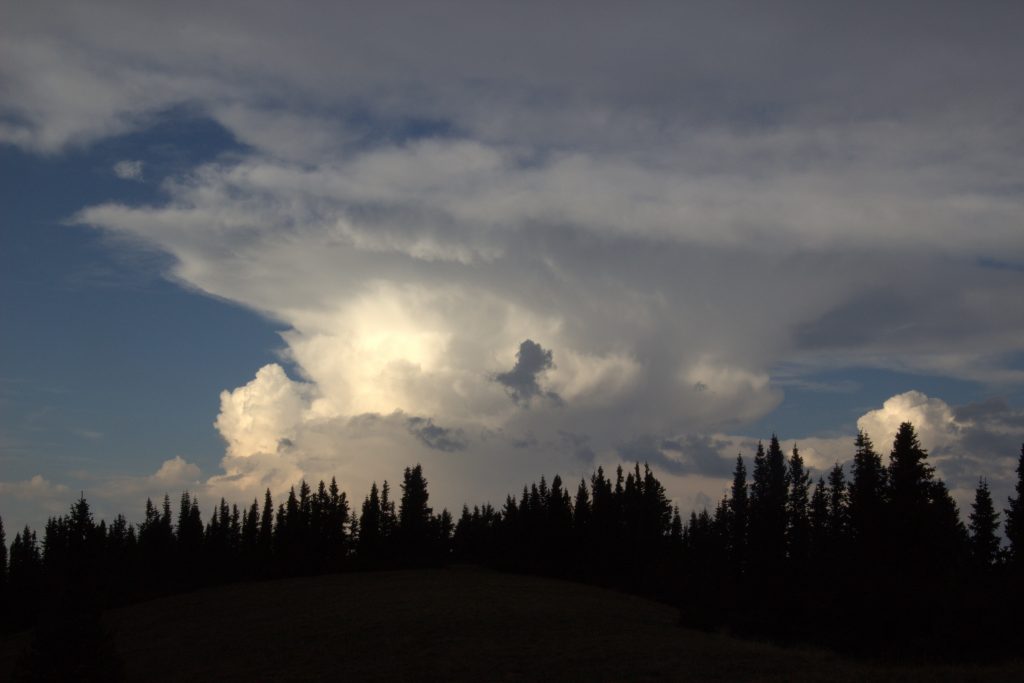 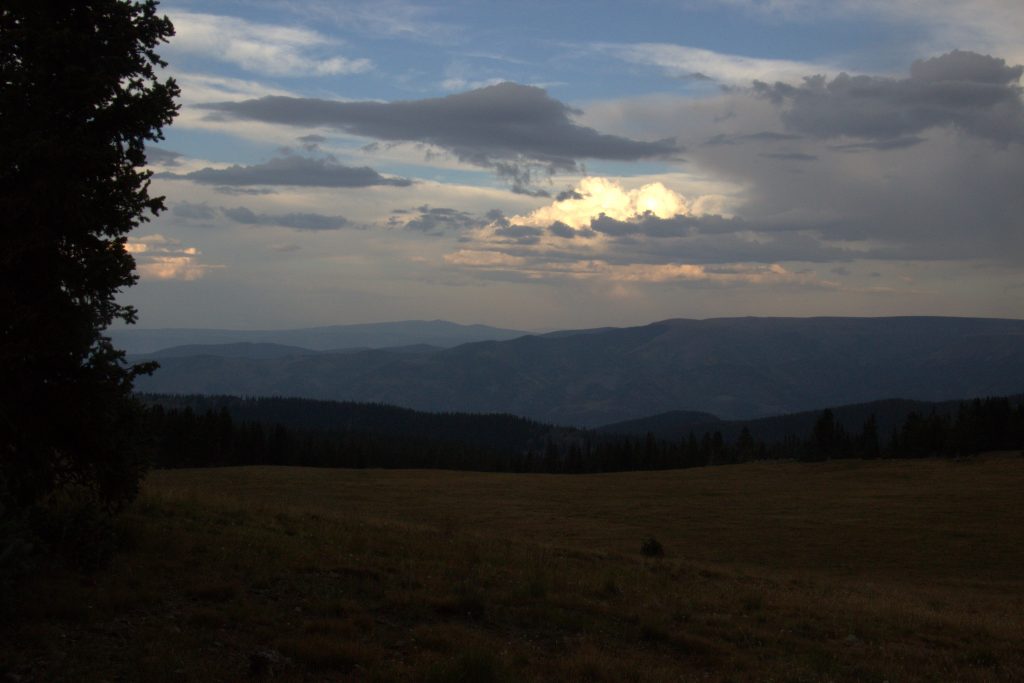 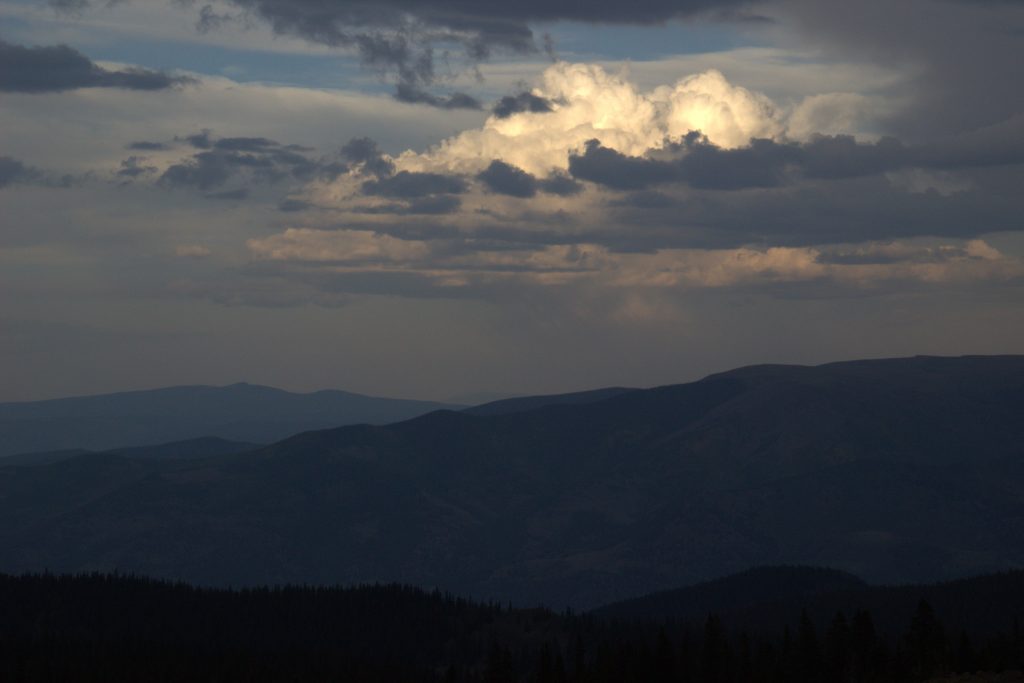 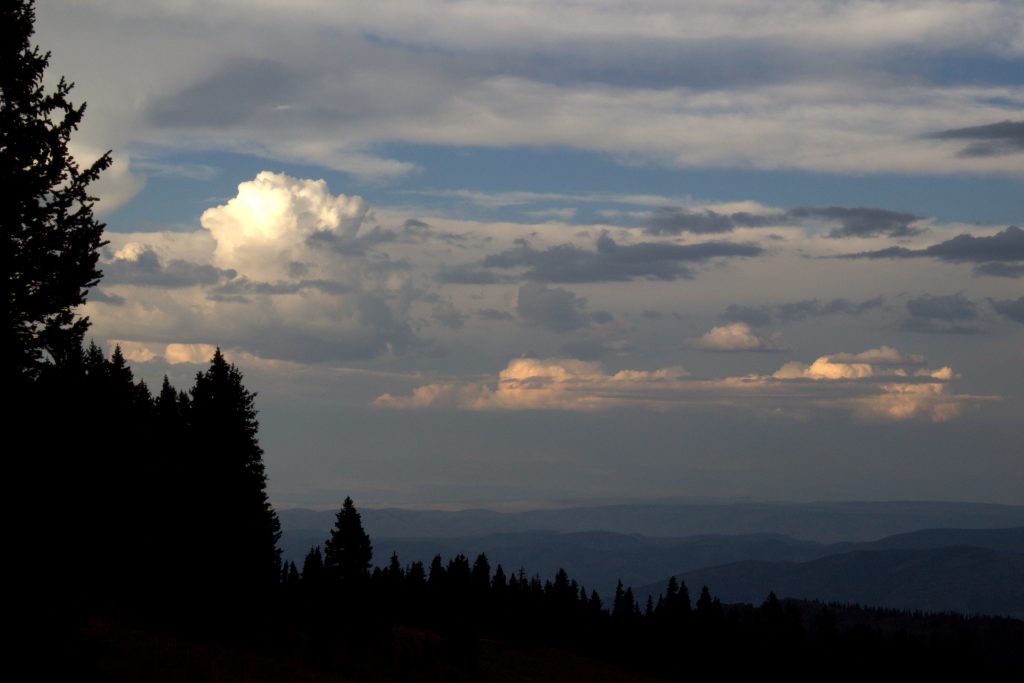 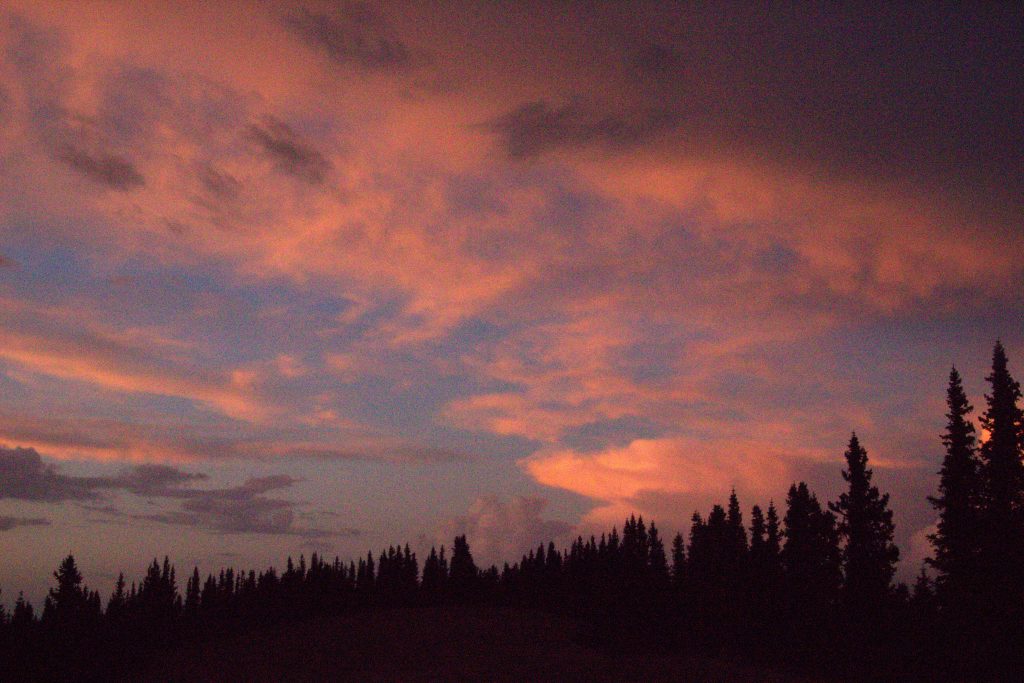 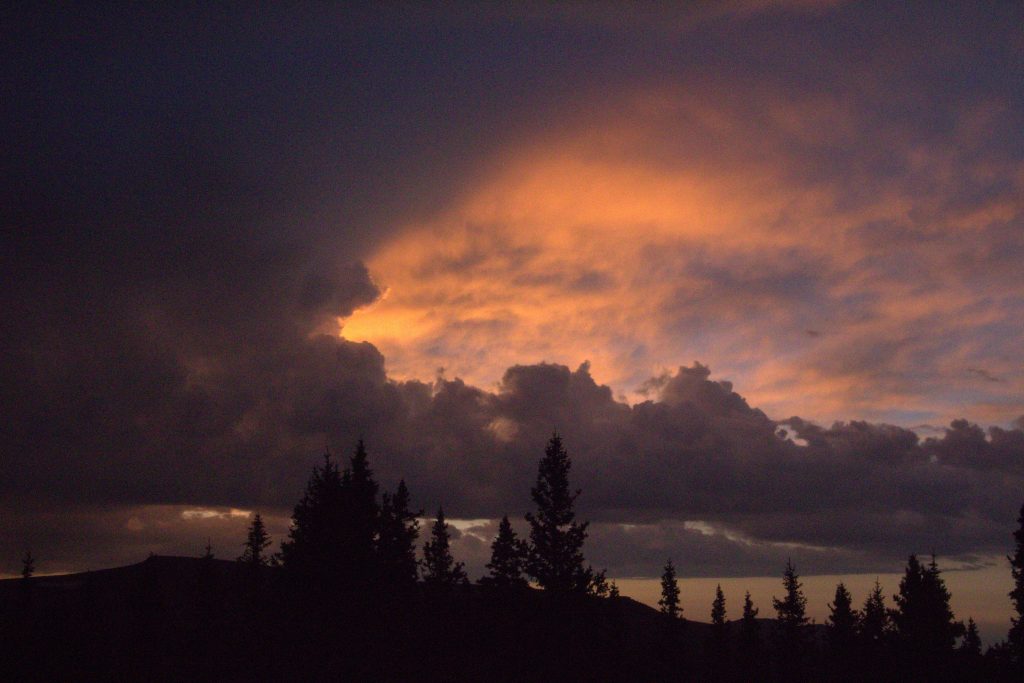 The next morning I continued hiking the ridgeline alternating between forest hiking and open meadows, where I could still look back to Uncompahgre Peak. Finally, there was a descent down densely forested switchbacks to the dirt road.  I had to walk several miles on the road back to my car.  No cars passed as I walked the road.  In fact, I had only seen two groups of horse outfitters on the Big Blue Trail and some people day hiking from the Uncompahgre Trailhead at the saddle.  On the wonderfully high Ridge Stock Driveway, I enjoyed complete solitude in the endless open distances. 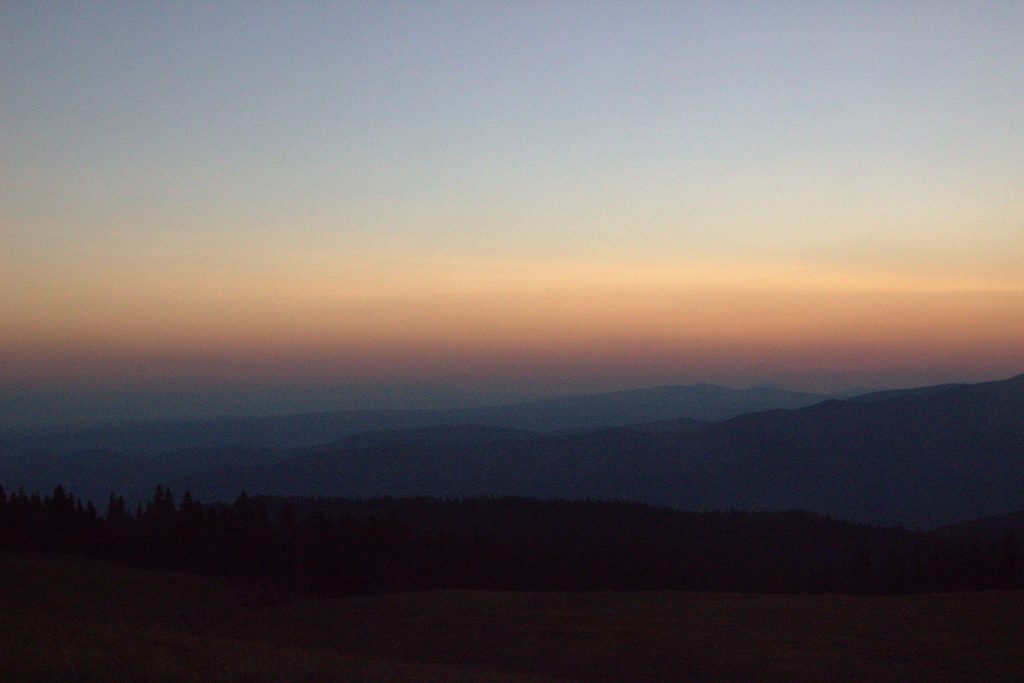 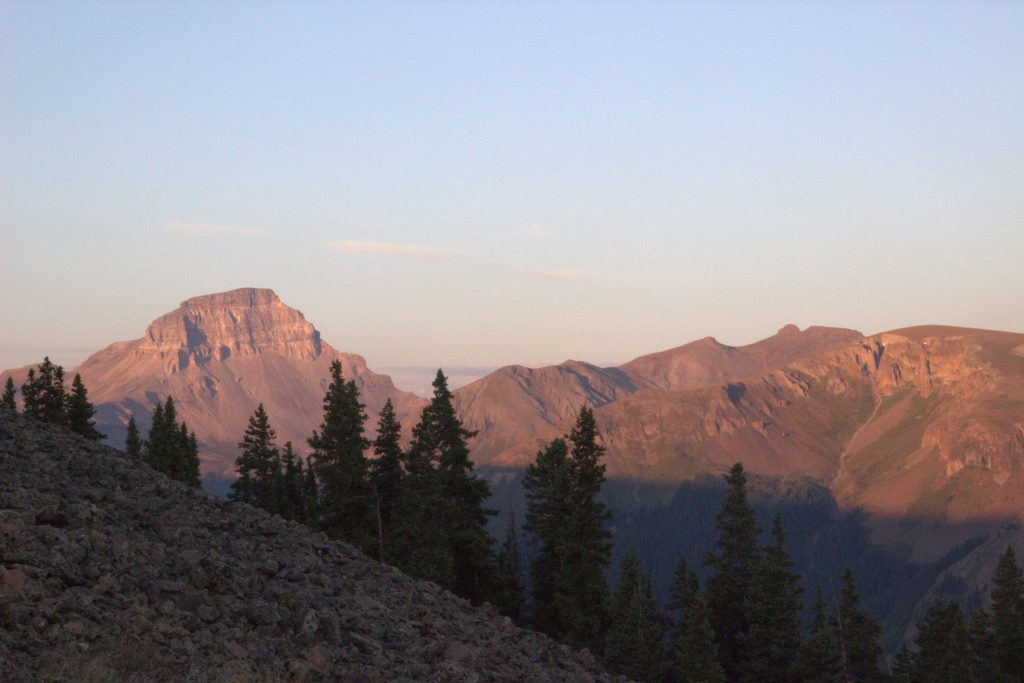 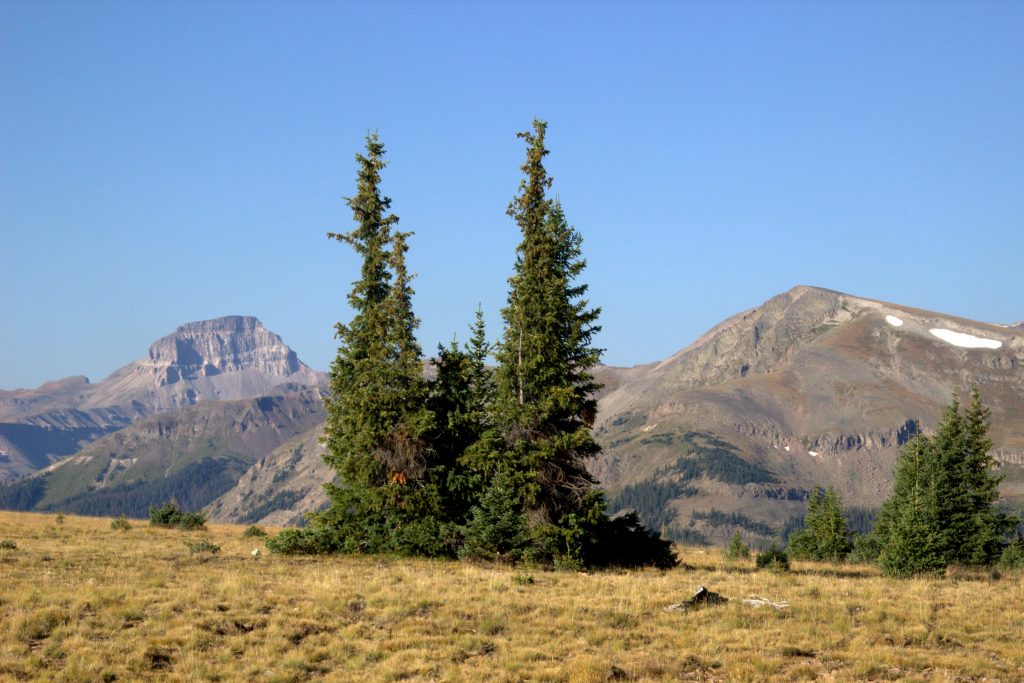 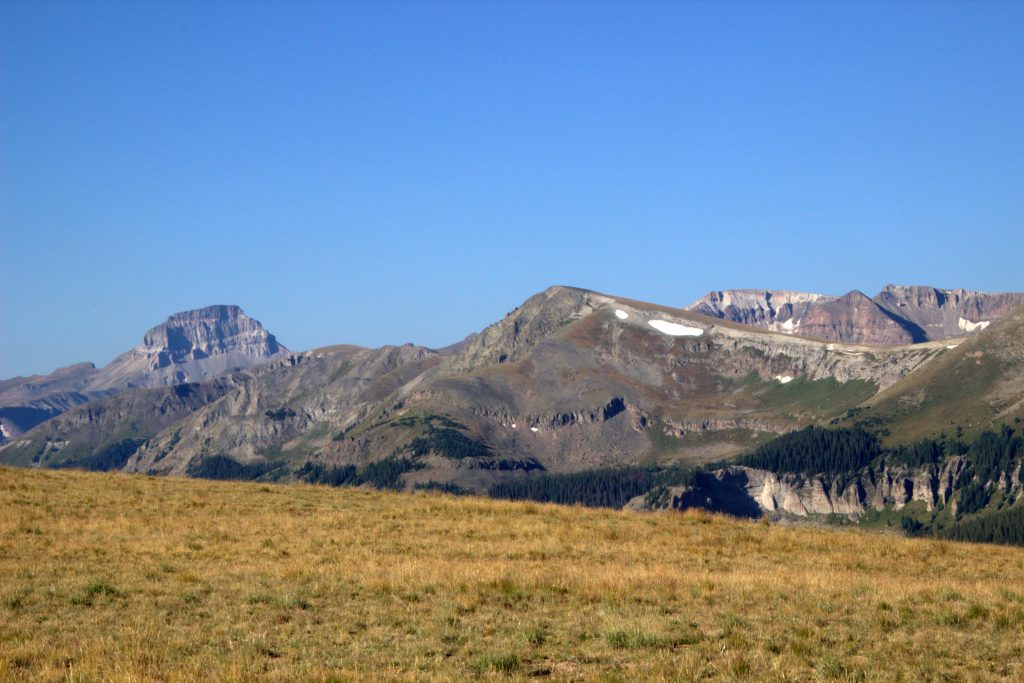