On August 25, I toured Tuscany.  I had asked the Alma Domus people to set me up with an all day tour that would take me around the countryside and to some hilltop towns. So my guide, whose name was Francesco, picked me up in the lobby of my hotel in Siena. I was the first customer and Francesco told me I would be the only person until we picked up a couple in San Gimignano.  So we headed towards that town.  Francesco told me about the area and we stopped for an initial view of the town with its walls and towers. San Gimignano is a UNESCO World Heritage site, and is another medieval town frozen in time by the plague of 1348.  San Gimignano prospered because it was located on pilgrim trail from Canterbury to Rome, but later the trail was moved away. Francesco let me tour the medieval town on my own for a couple of hours and then we picked up the young couple. It turned out they were on their honeymoon, he was from Toronto and she from the Netherlands.  Like most people I have met from the Netherlands, she spoke perfect English with an American accent. They lived in London.

I met more than one international couple on my trip.  Waiting to climb the Duomo in Florence, I spoke with a young couple, she from Turin Italy and he from the Netherlands.  They both spoke perfect English.  I asked if he spoke Italian or if she spoke Dutch.  Neither spoke the other's native language, so they conducted their relationship in English.  I saw this as an interesting sign of an increasingly global culture.

Driving around the countryside, we had pleasant conversations.  Francesco told us about the local culture, agriculture and history.  Like many other non-Americans on this trip, the couple had to ask me about the upcoming American presidential election, but they were very polite about it. We talked about popular music and Francesco told us that he listened to Nirvana when he was young. 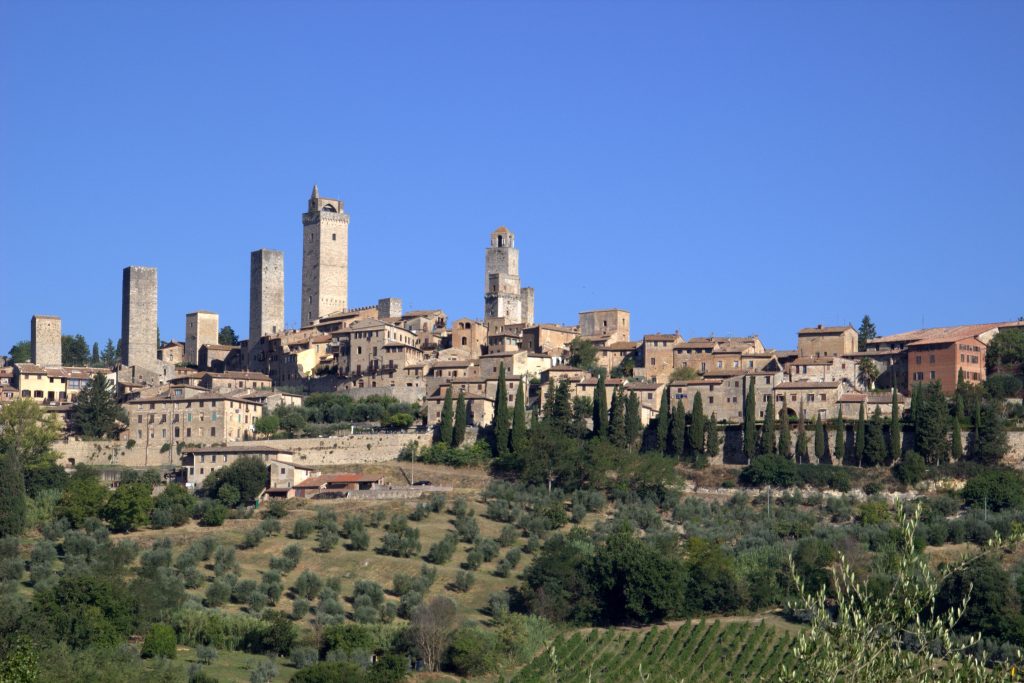 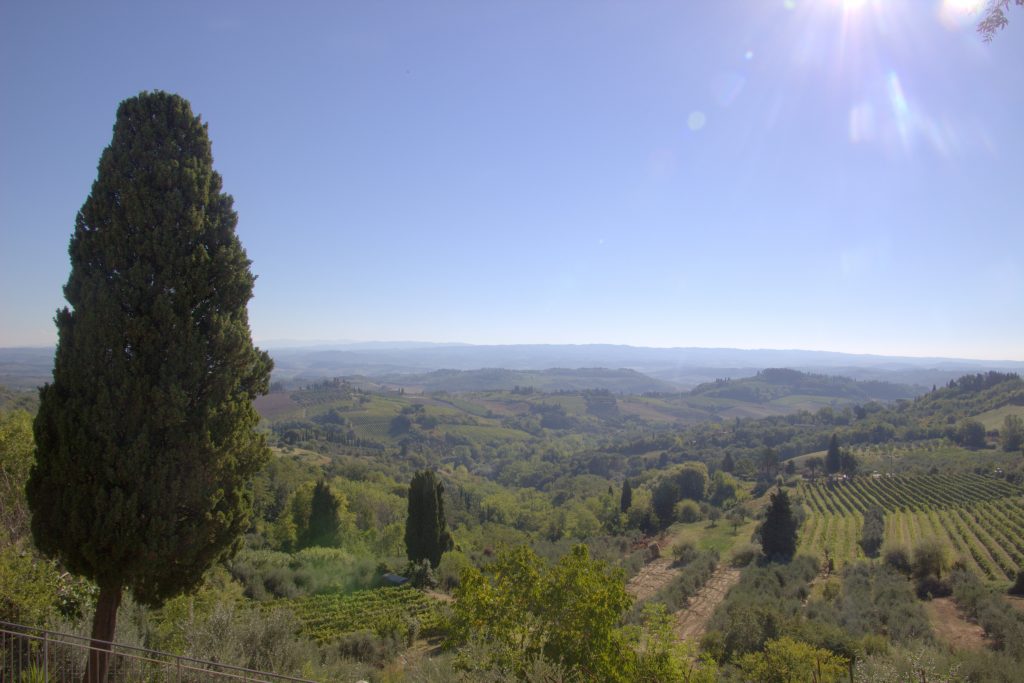 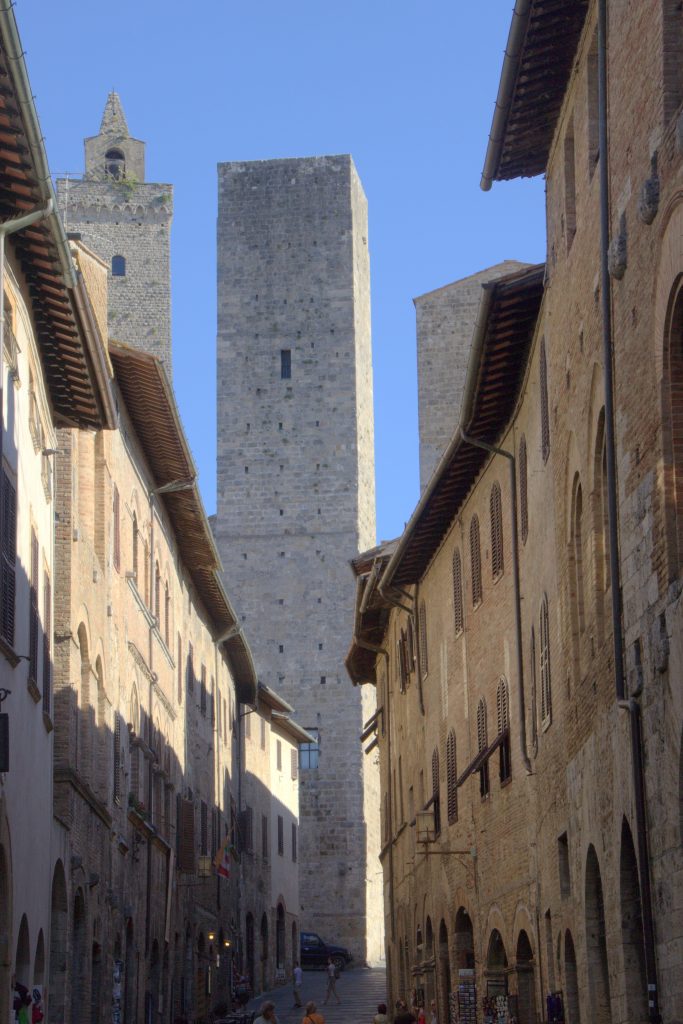 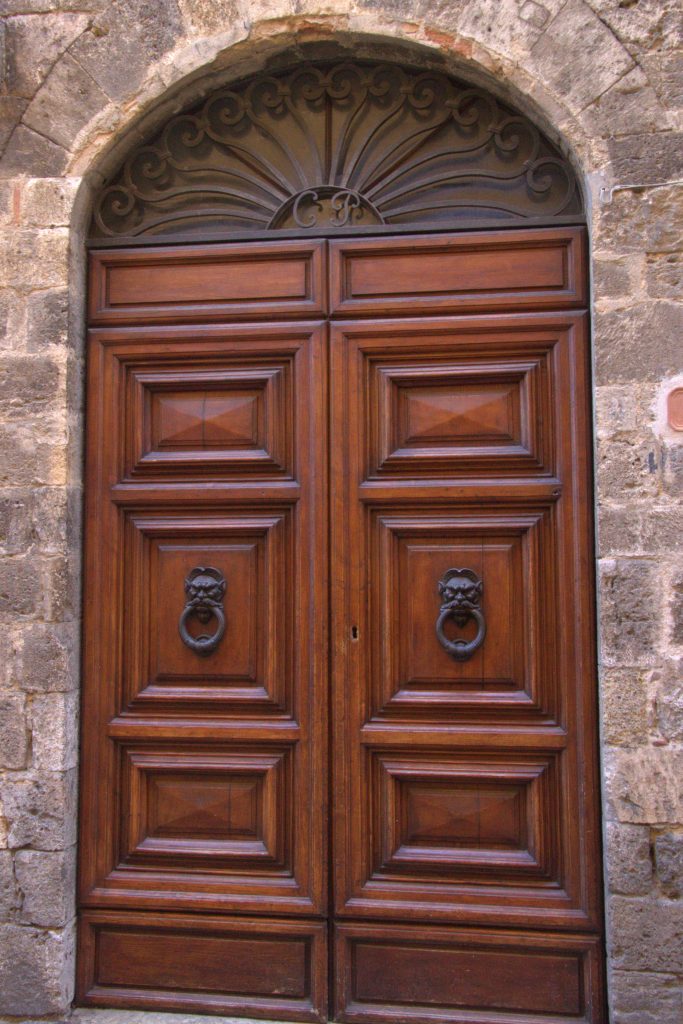 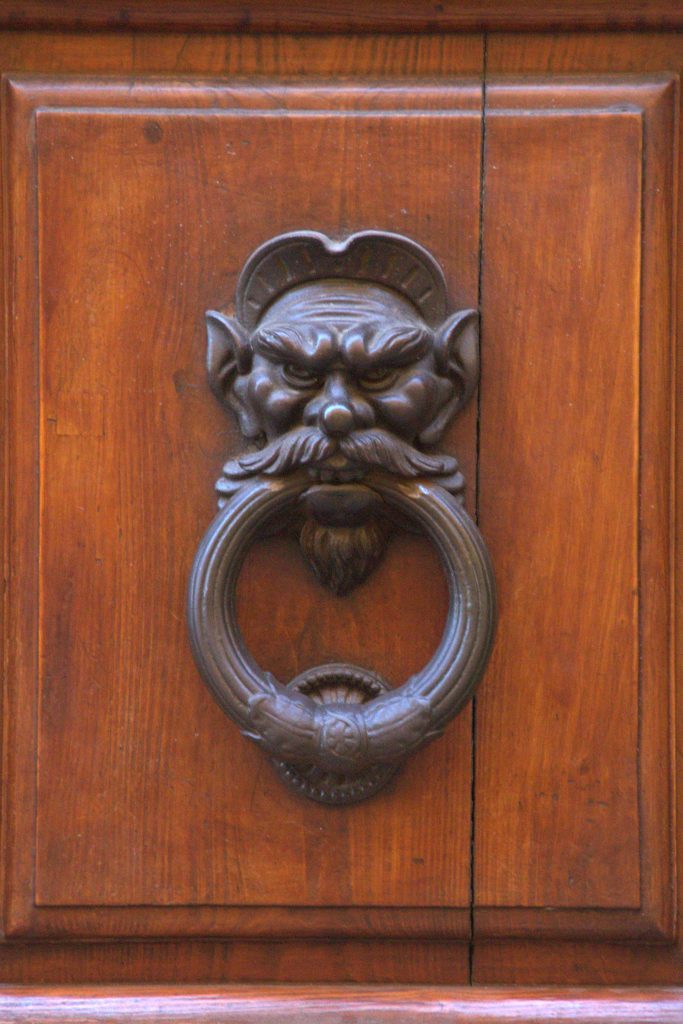 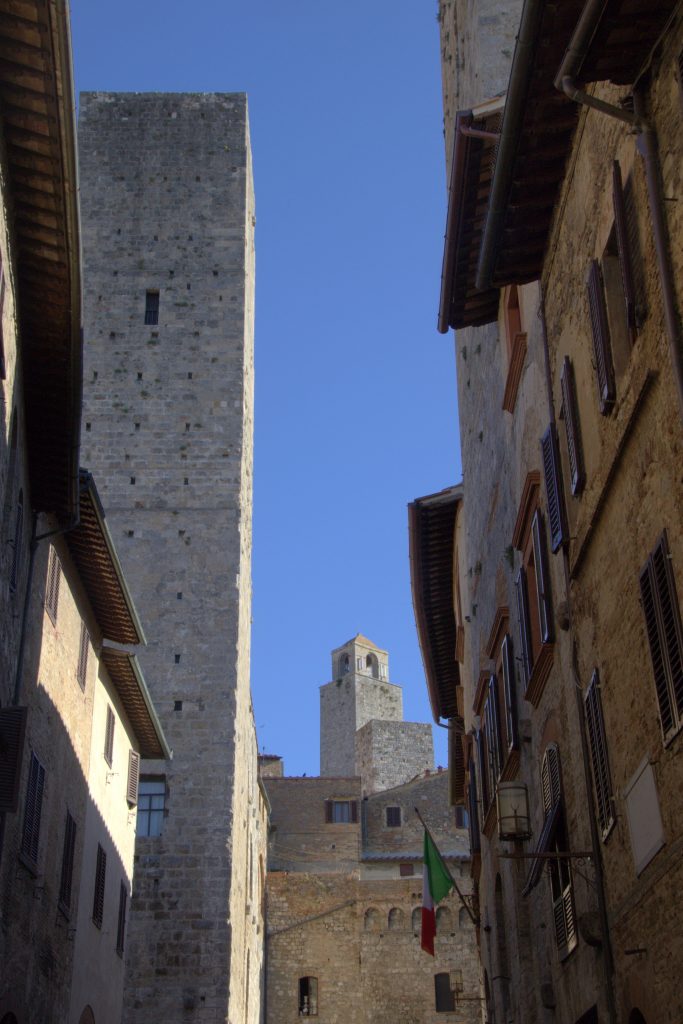 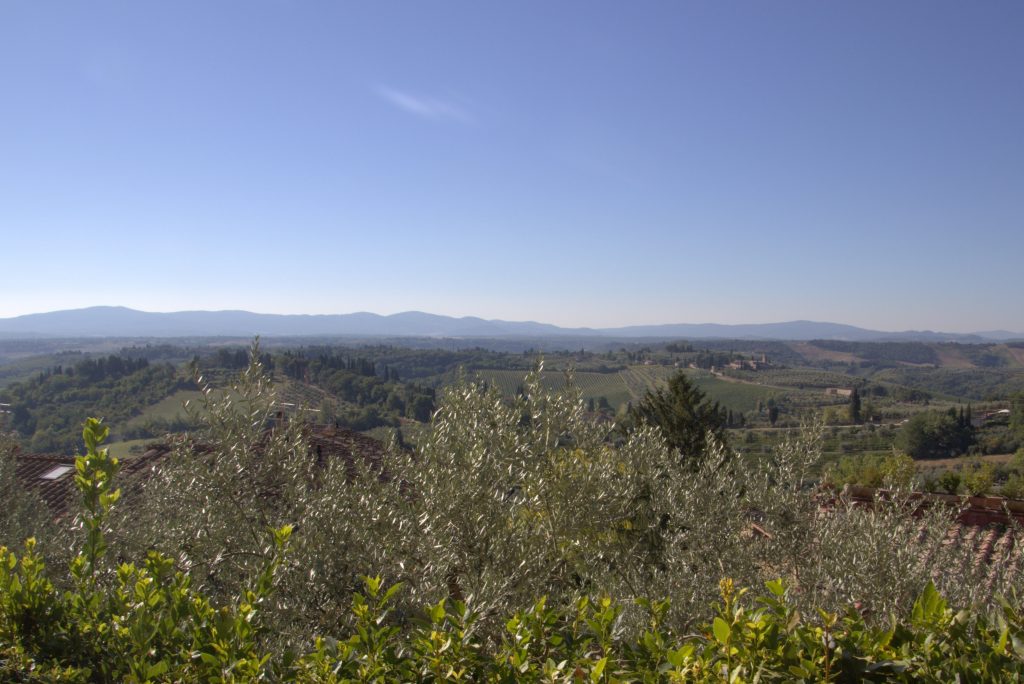 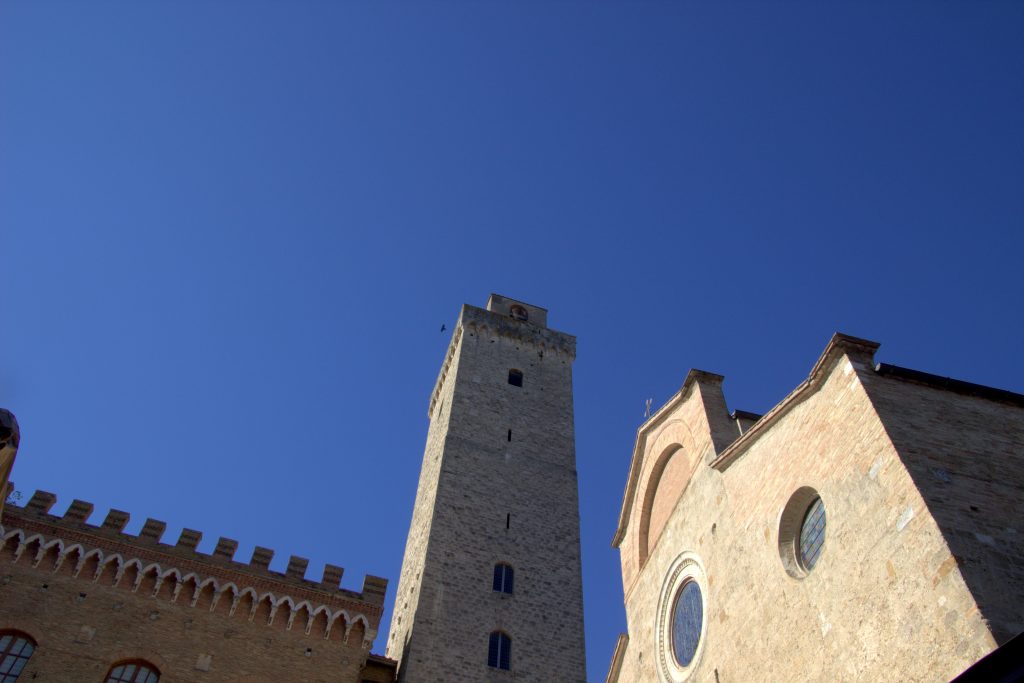 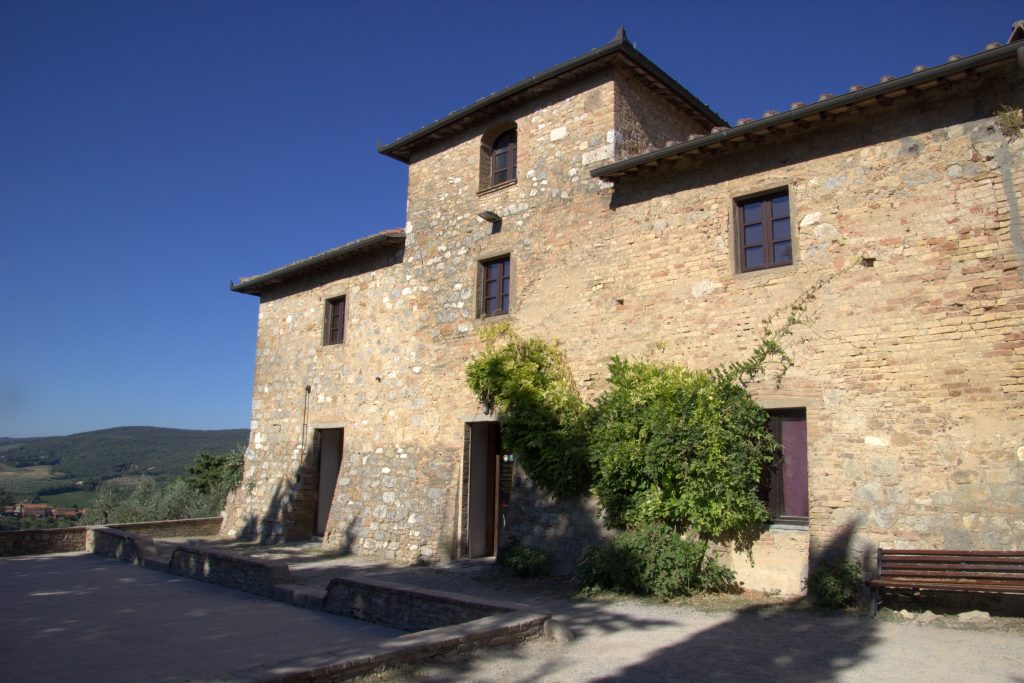 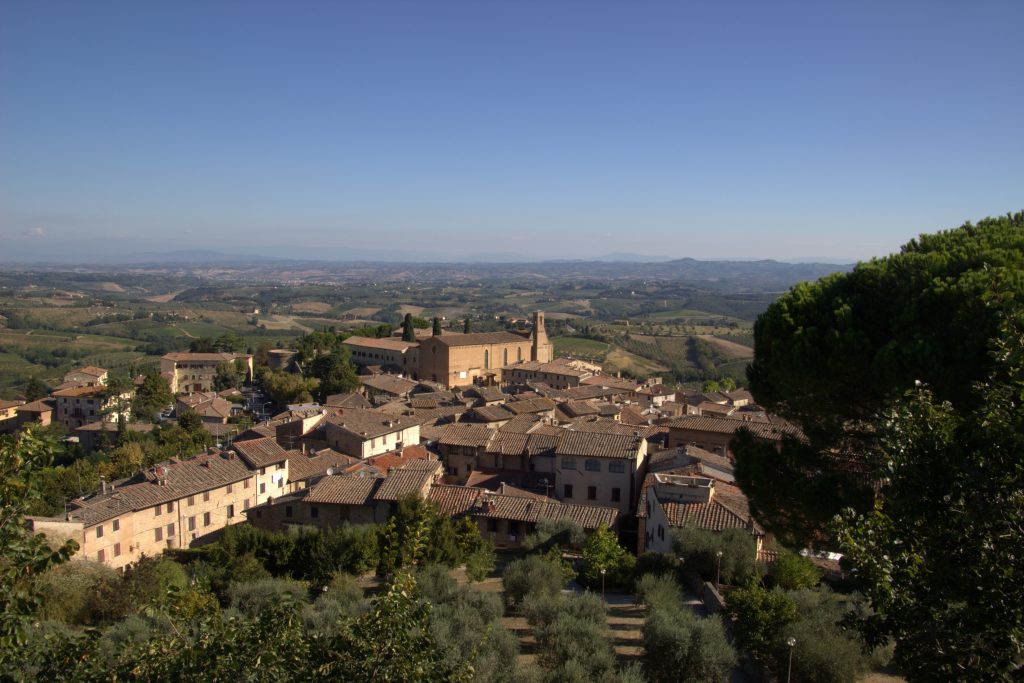 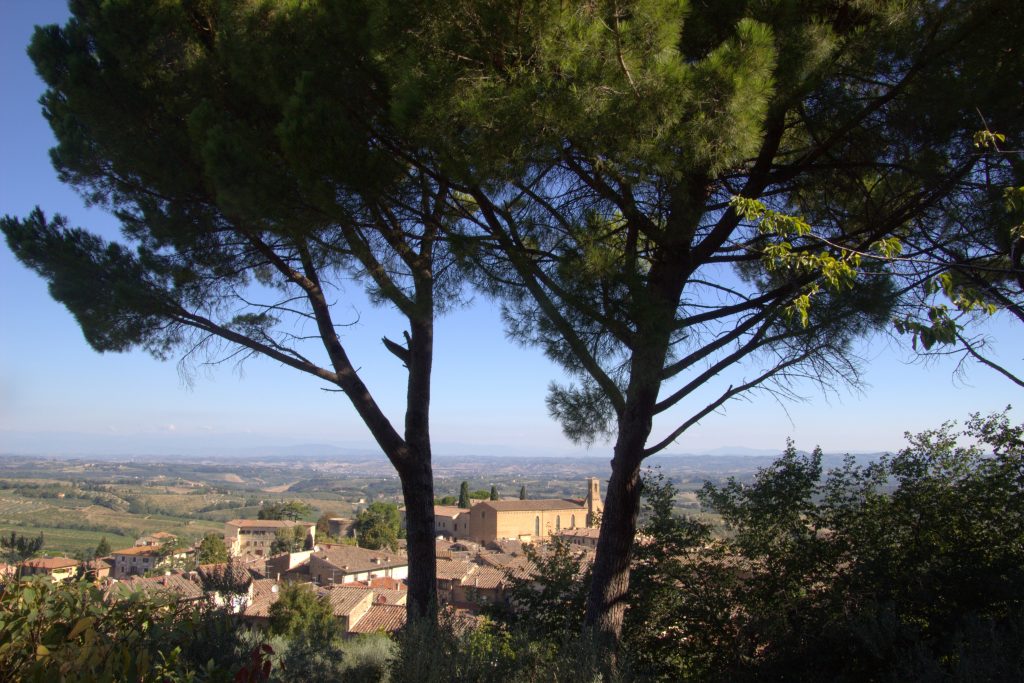 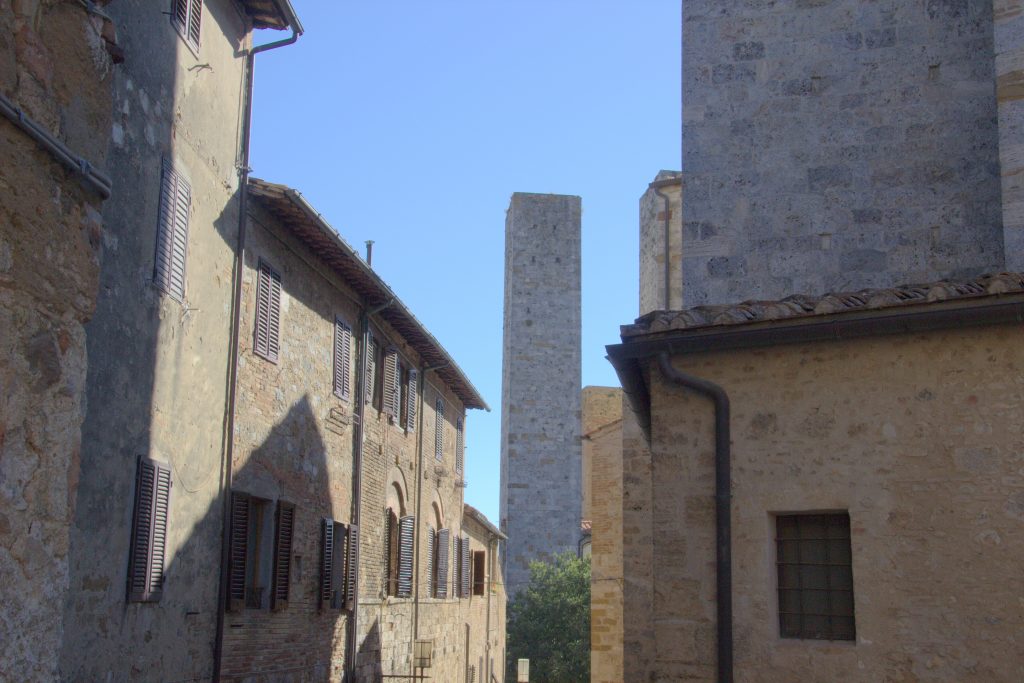 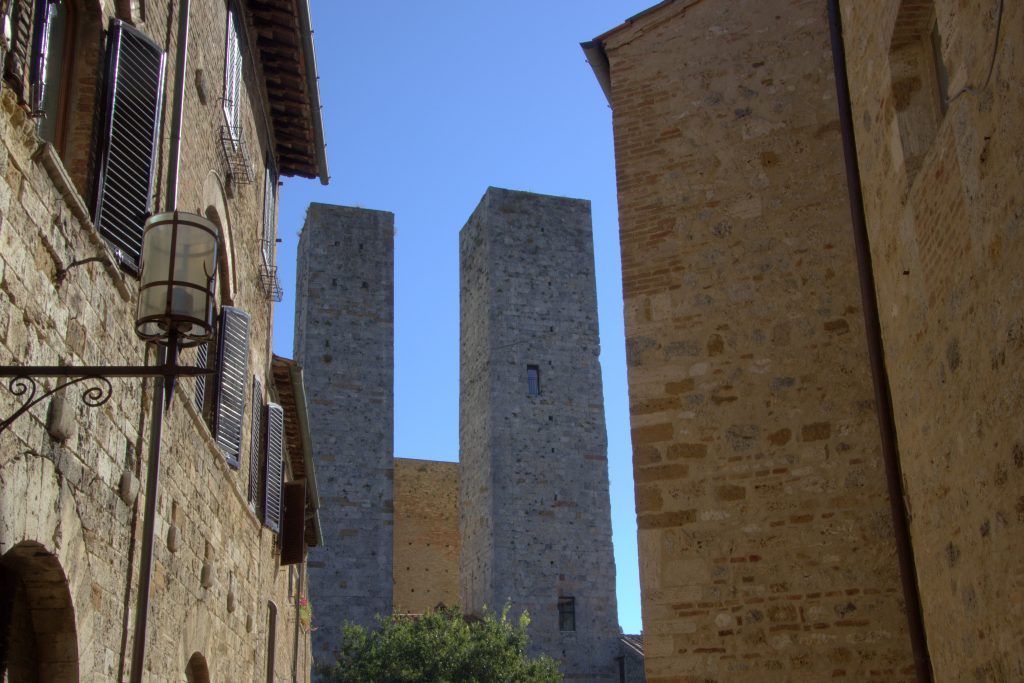 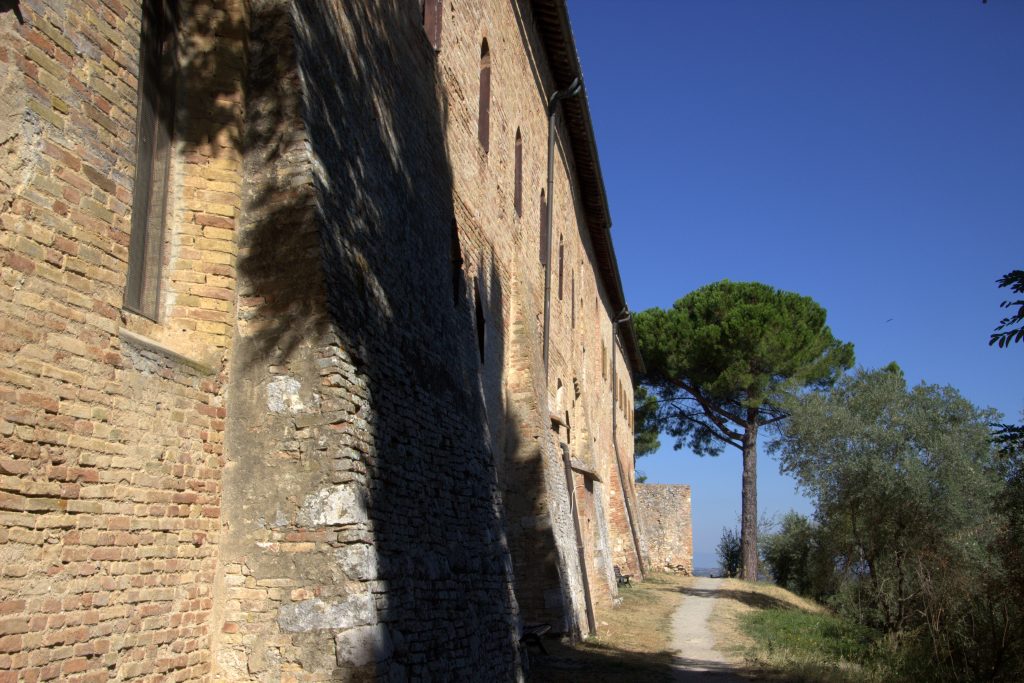 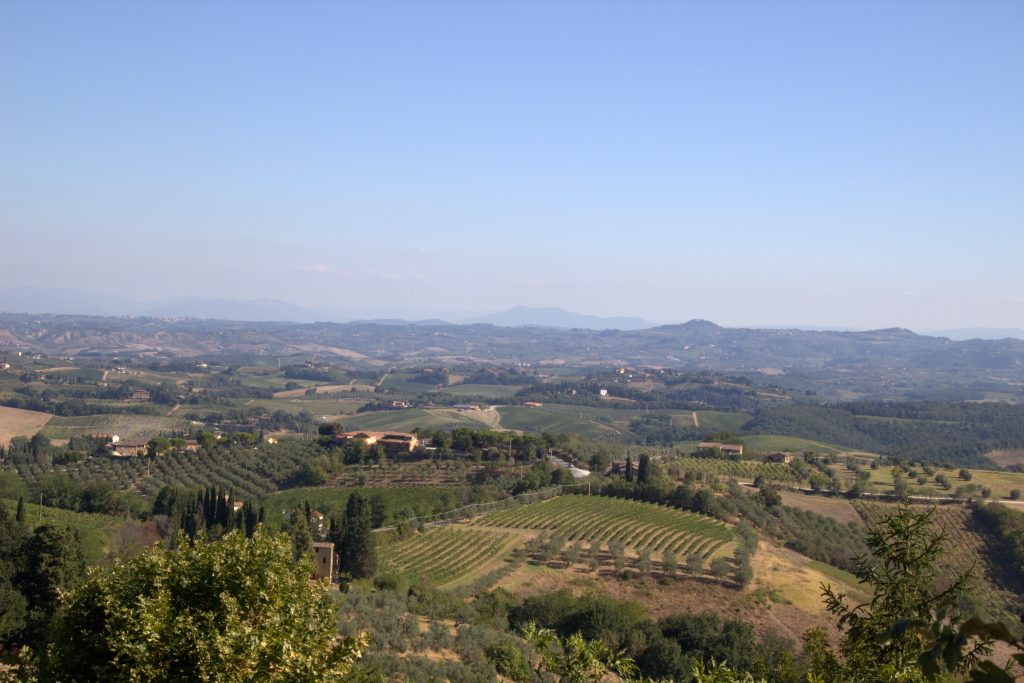 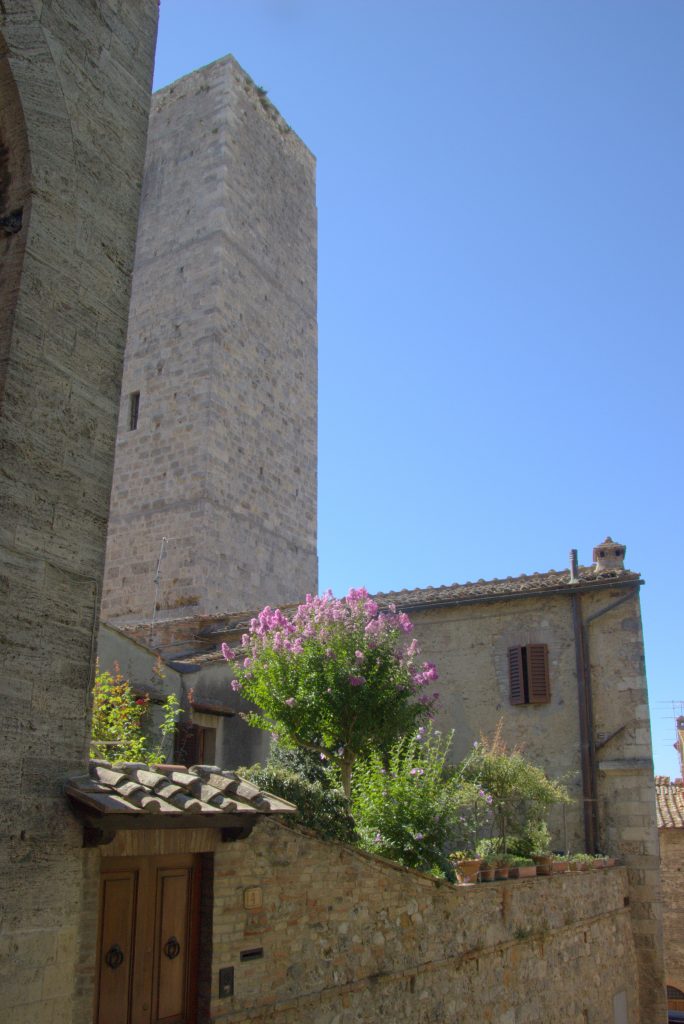 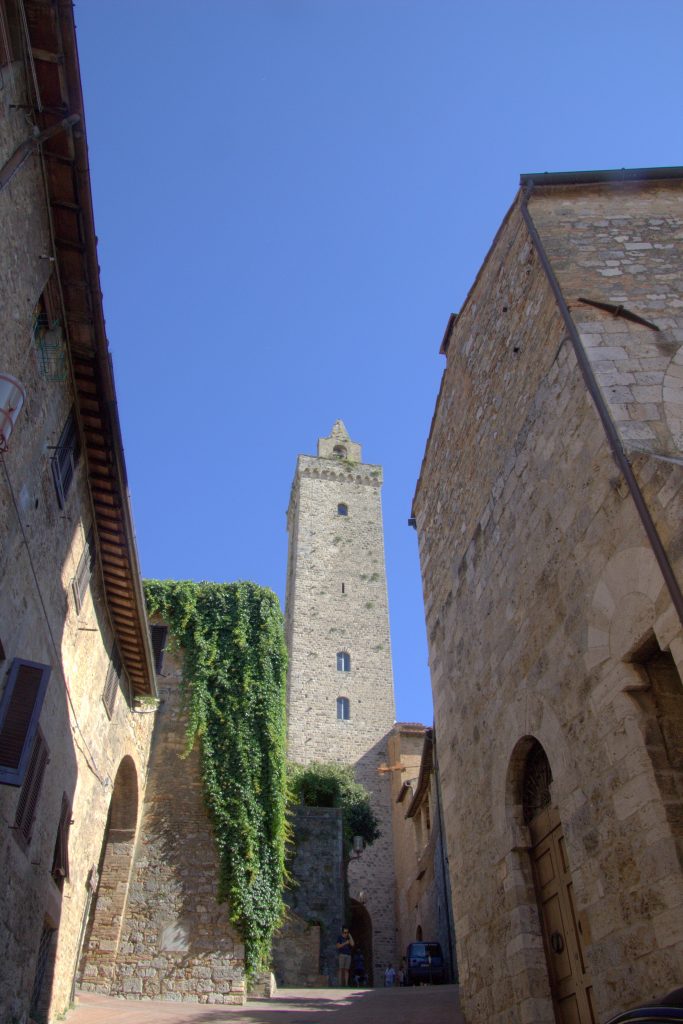 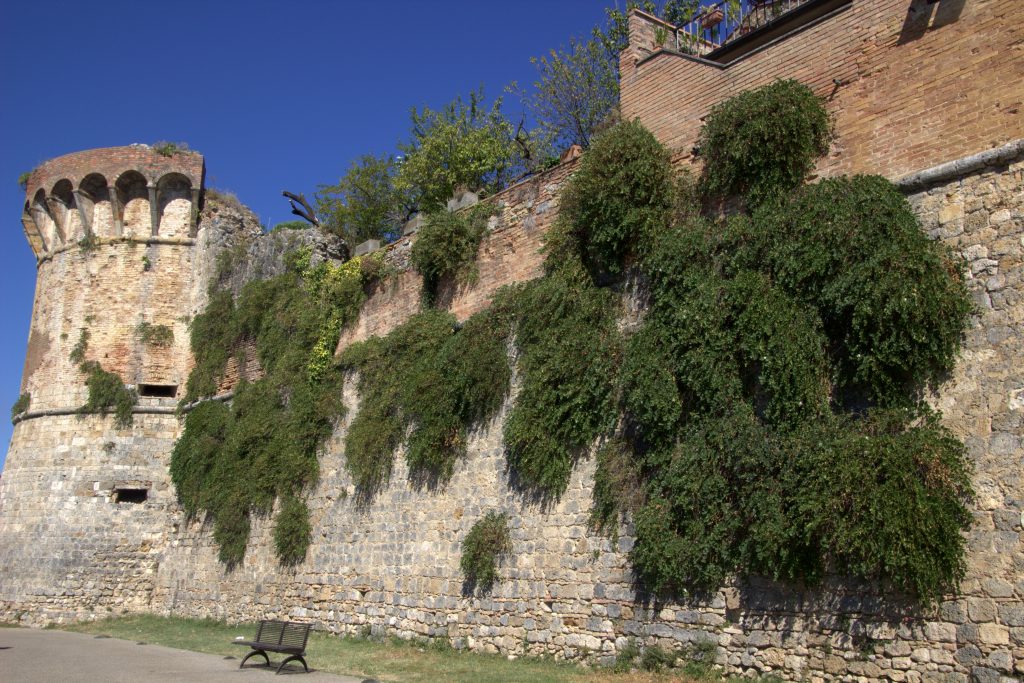 After San Gimignano, we stopped at the Torciano winery for a wine tasting in a lovely flowered arbor attached to the rural winery.  After a lesson from a woman of the family on how to taste wine, we tried five wines while we munched antipasto. They gave us some nice lasagna for our lunch. I liked the Vernaccia white and the Chianti.  The high-priced, full bodied Brunella excited the others who actually knew something about wine. Needless to say, we were feeling pretty good when we resumed our tour.

We next stopped at Monteriggioni, a medieval hilltop settlement which looked more like a garrison than a town with its high walls.  In fact, the city of Siena used this fortress for the protection of its outlying areas. Like the other hilltop villages we visited, it had great views of the surrounding countryside. 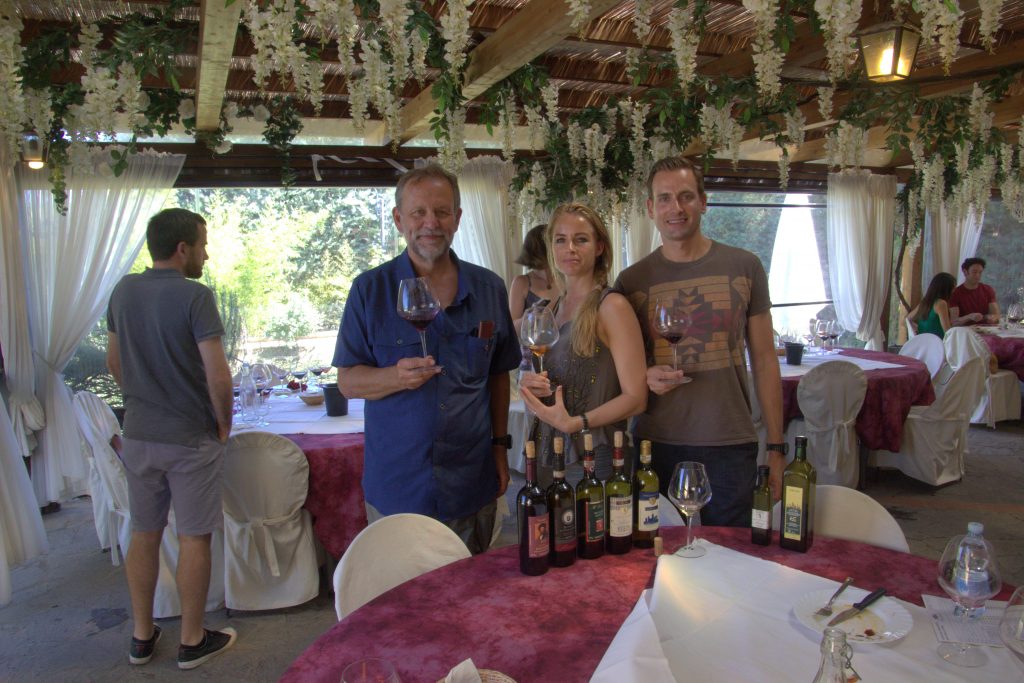 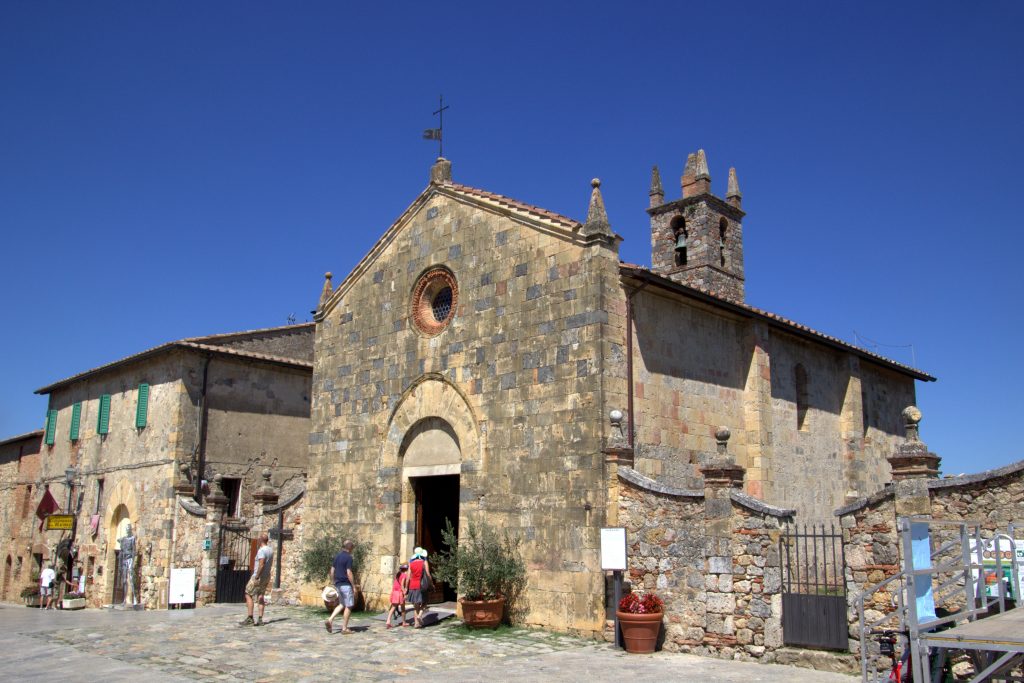 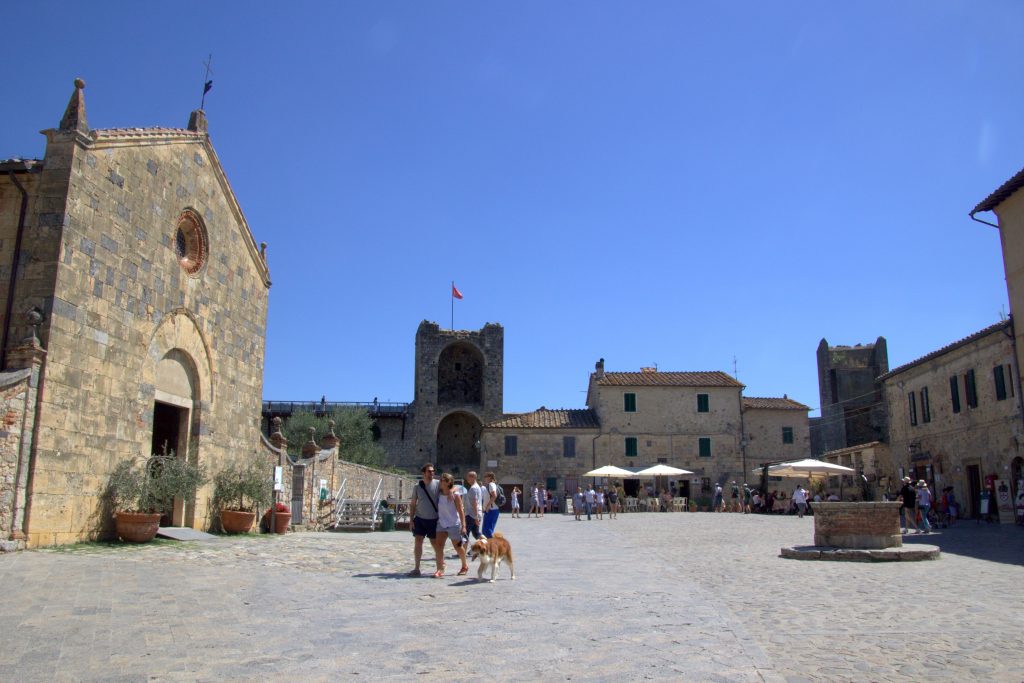 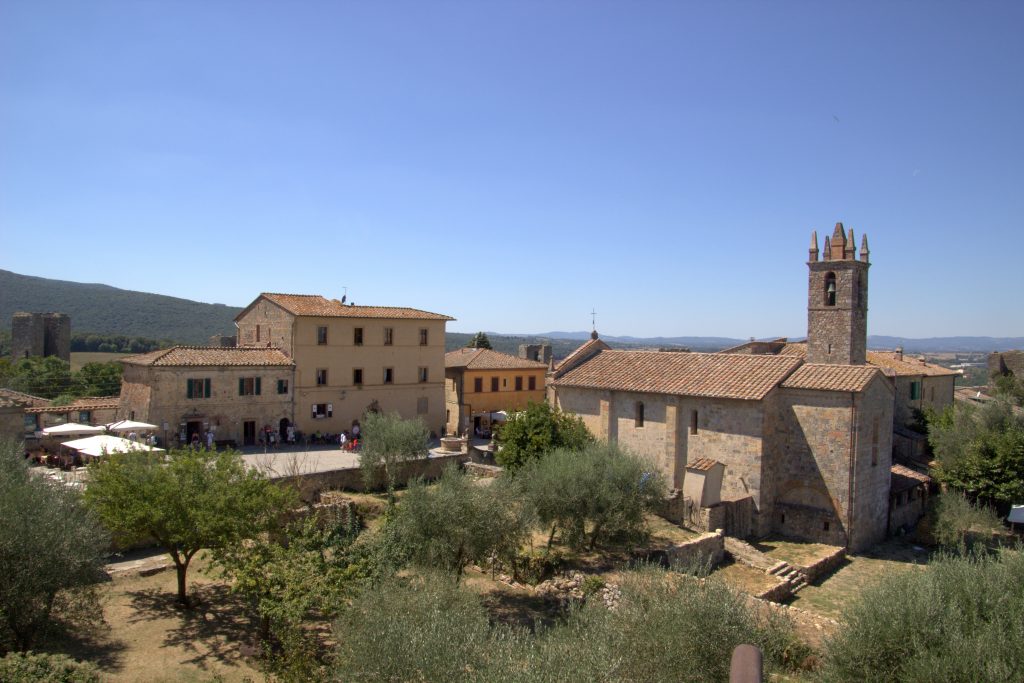 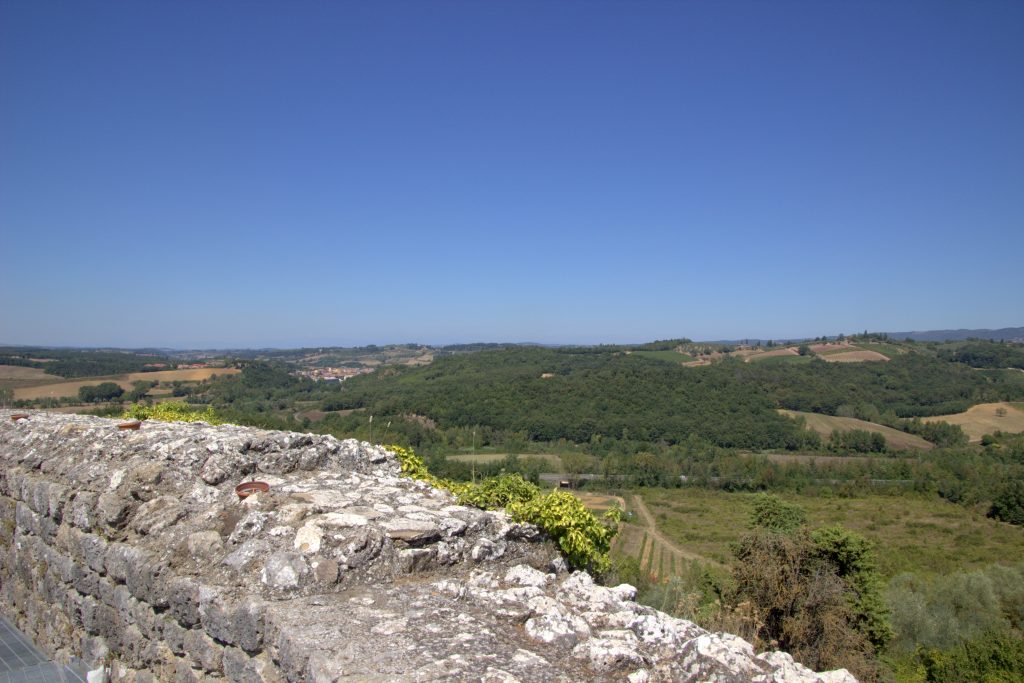 We next stopped at another winery known for its Brunello.  On the way, we stopped for the newlyweds to take pictures in a field of head-tall sunflowers. After we went into the winery and looked at some of the traditional equipment and talked about the rural culture, we sat at a long table to taste wine with another tour group of mostly British people.  By coincidence, the group included a couple from Wales who I had met and conversed with at the restaurant the evening before in Siena. I have found the British tend to let go and have fun on their holidays.  So our wine tasting turned into quite a party with a great deal of joking and laughter. When the newlyweds left the table for a moment, I told everyone they were on their honeymoon.

After the couple came back, the word was out. We were all surprised when the paterfamilias of the vineyards came to our table and began talking to the newlyweds.  He hugged the bride and gave a speech in Italian, with our guide translating, telling the couple the importance of being faithful and loving to each other.  He hugged and kissed the bride again and hugged the groom.  He then turned music on and danced with the bride. The whole group laughed and applauded and had a great time.    The bride was slightly embarrassed but hopefully, it was an experience they will never forget. At the end, the family brought us a shot glass of grappa, a liquor made from the remains of the wine making process. Following the lead of the family, we toasted the couple, counted down from five, and down the hatch.

Our last stop on the tour was to another ancient, hilltop town Montalcino.  Montalcino is in the Val d’Orcia, and area that has been designated as another UNESCO World Heritage site. This is an area of wide-open, classic Tuscan landscapes portrayed in much art from the paintings of the Renaissance to contemporary photography.  It had been a grand day in medieval towns, wineries, and sunlit rural landscapes. 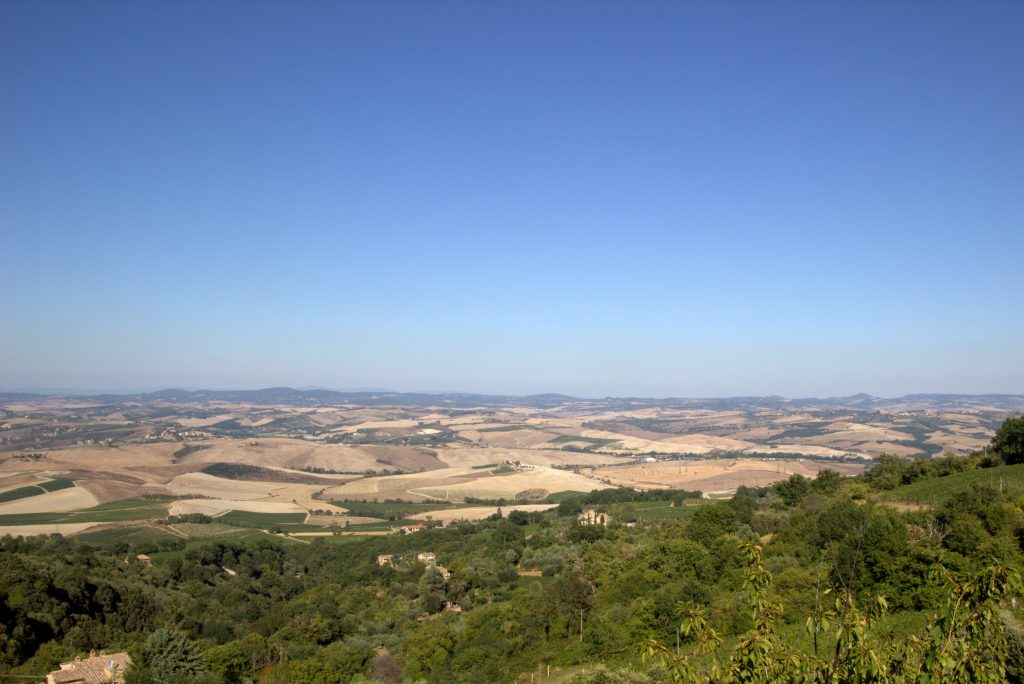 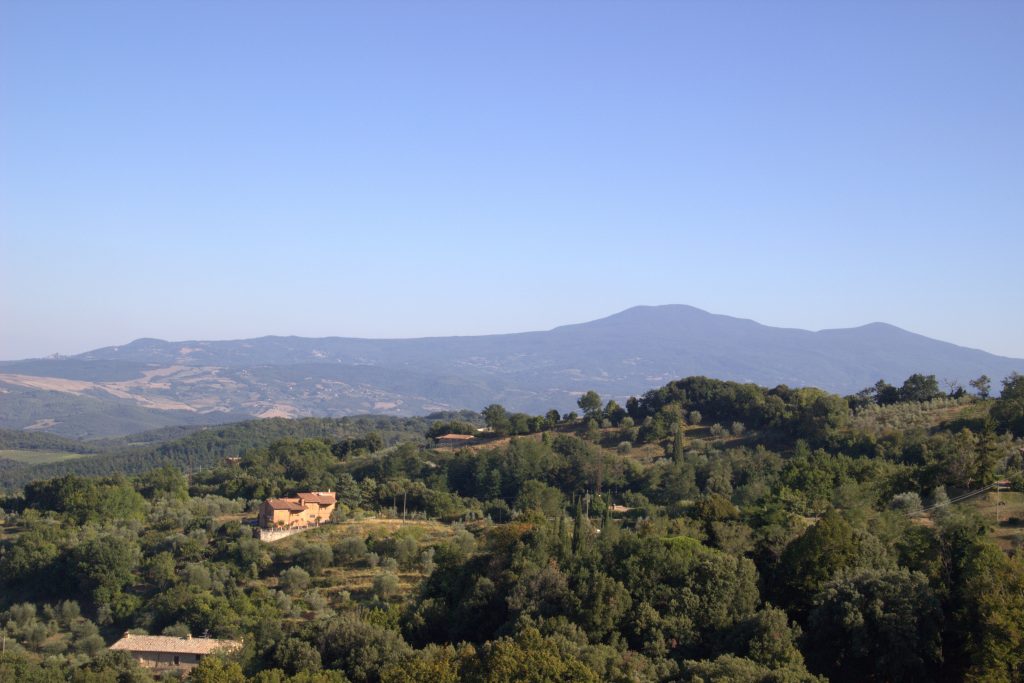 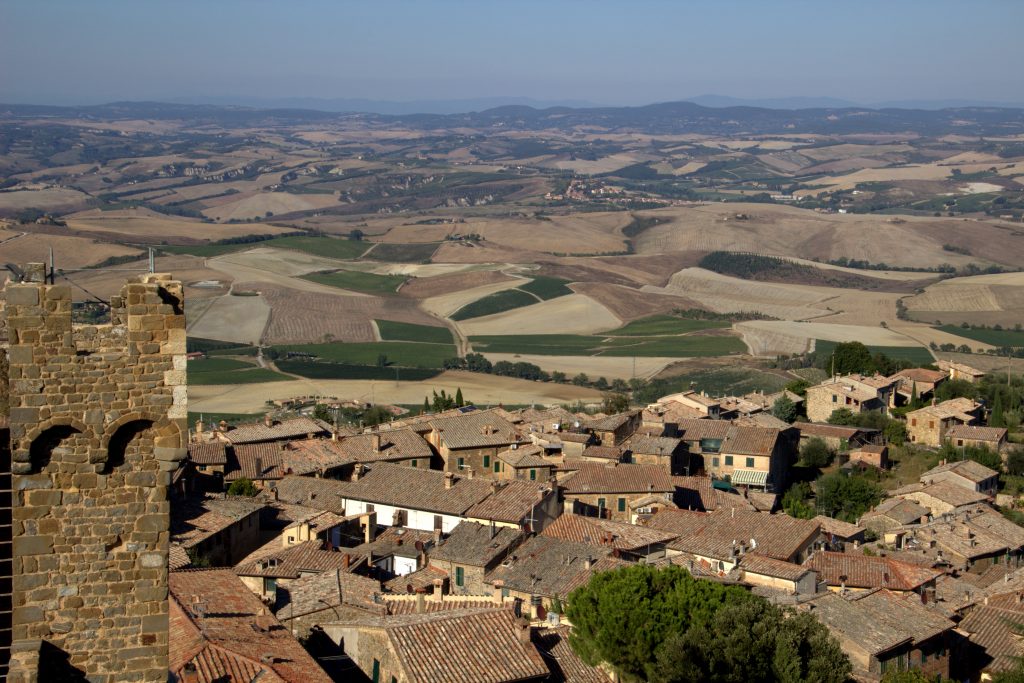 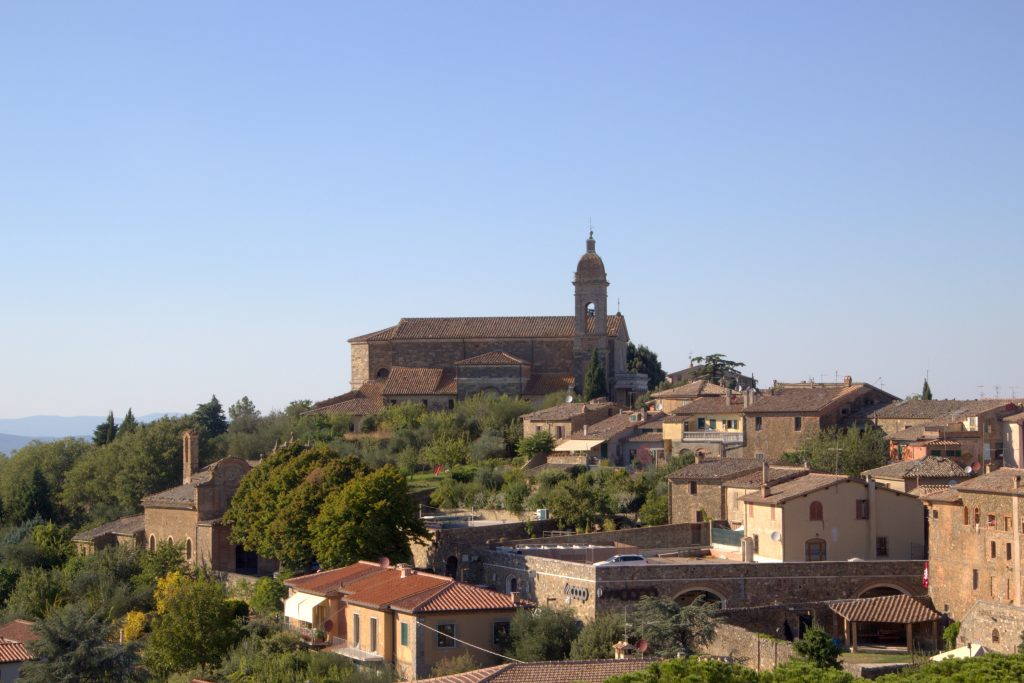 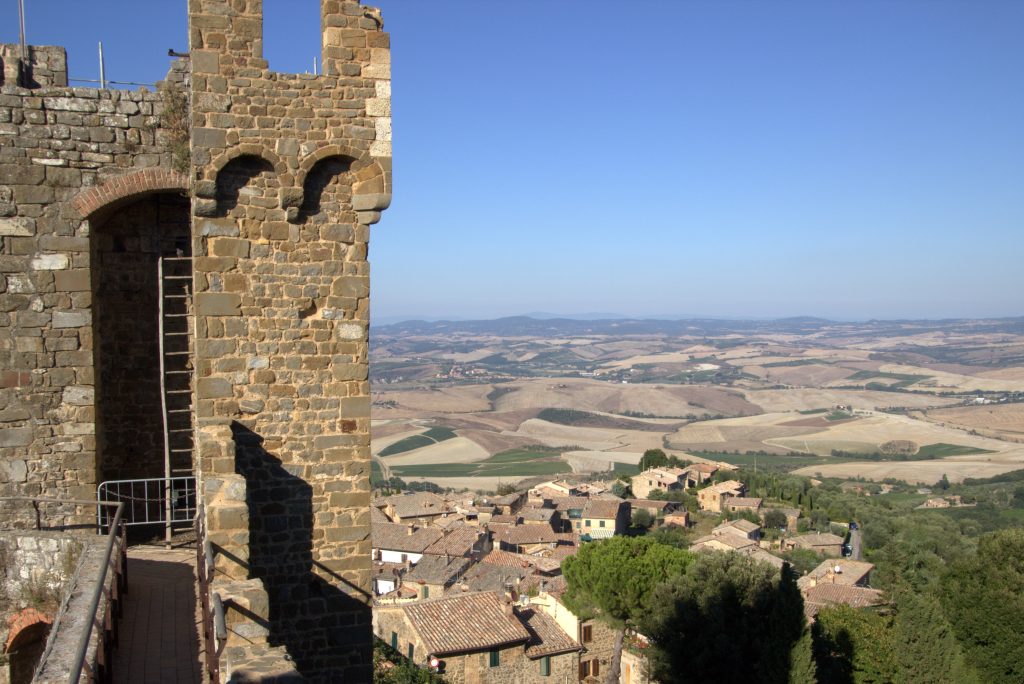