Over the Fourth of July weekend, I led a group backpack into the Powderhorn Wilderness area, said to be the largest expanse of alpine tundra in the lower forty-eight states, an area of beautiful lakes and high, flat mesas, without the typical Colorado peaks. We started hiking through softly foggy forests under overcast skies. We hiked over a ridge and into a large meadow, with the wind blowing the fog across the enormous space, clearing the view as we watched. After hiking through more forest and past two  small, mirror-surfaced ponds, we came to an open stream valley where the sun briefly shone and we rested.

Next, we hiked the short distance to the Lower Powderhorn Lake.  It too reflected with a mirror surface and was in a basin surrounded by wide, vertical walls. From the lower lake it was a short hike to our campsite next to the larger Upper Powderhorn Lake, where we set up our camp in a broad open area with trees all round and plentiful flat spots for our tents. This basin was surrounded by the continuous high walls of the Calf Creek Plateau above us.

In the afternoon, it rained off and on and I napped in my tent. Later, the skies cleared a bit and the grouped wanted to explore. We climbed up a grassy slope, several hundred feet, out of the lake basin and onto the high mesa above, where we had a complete view of the basin and both lakes. We spotted a large stone cairn a half a mile away on the mesa, a bit above us.  We climbed to the cairn and found it to be approximately ten feet tall with walls extending from either side.  It was not located on a trail and we speculated about who built it.  Perhaps, it was built by shepherds.

On the top of the mesa, it had become foggy, and on the way down the grassy slope an intense downpour struck us. By the time we reached camp, we were soaked. 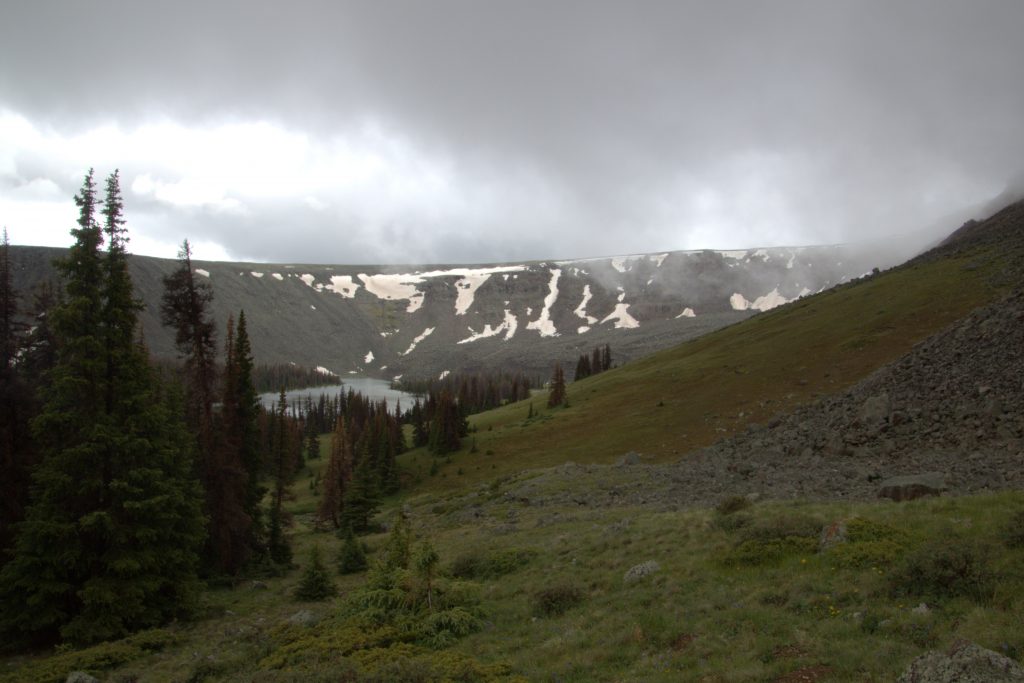 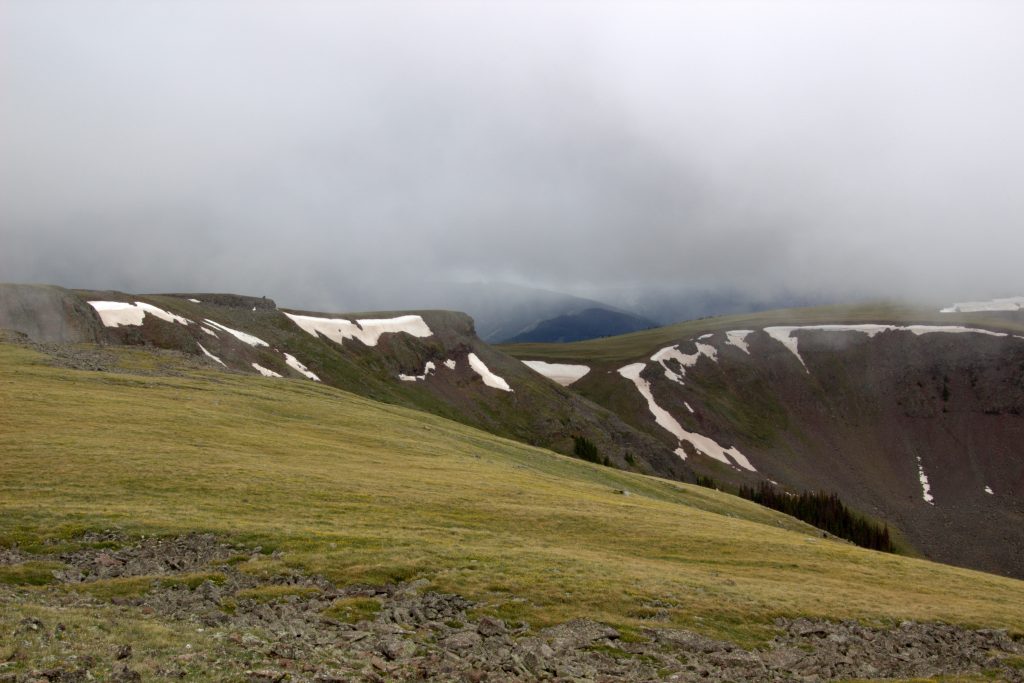 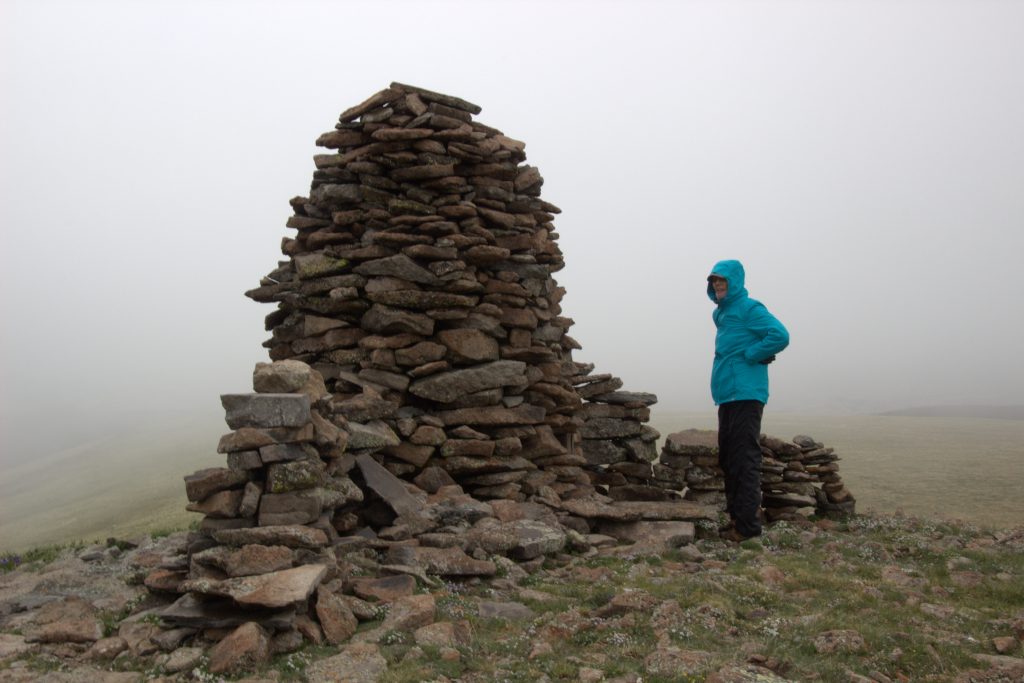 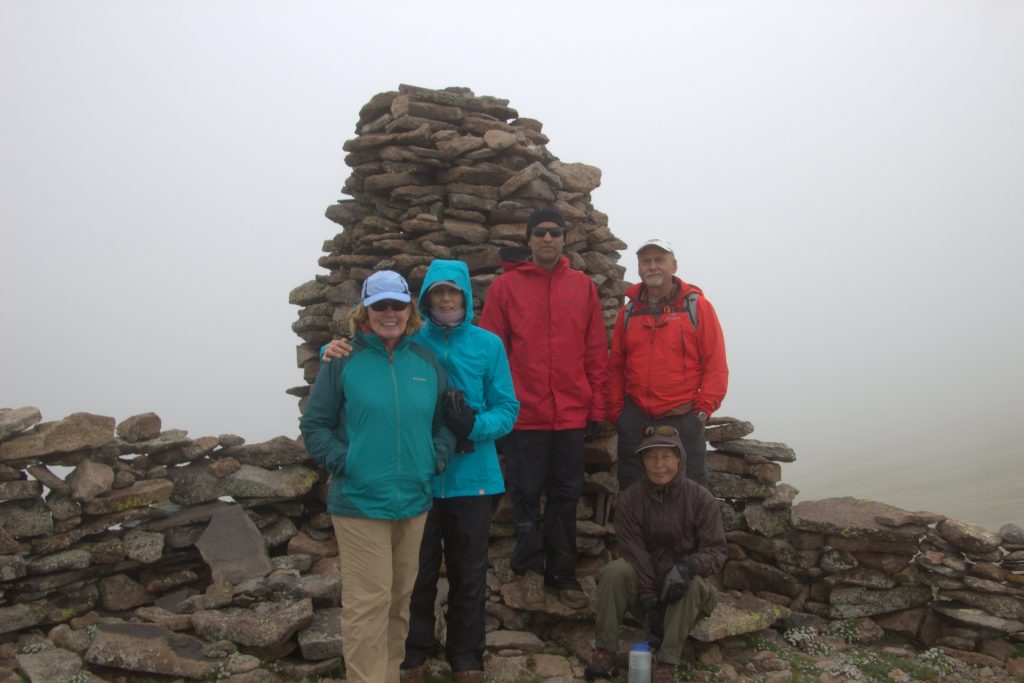 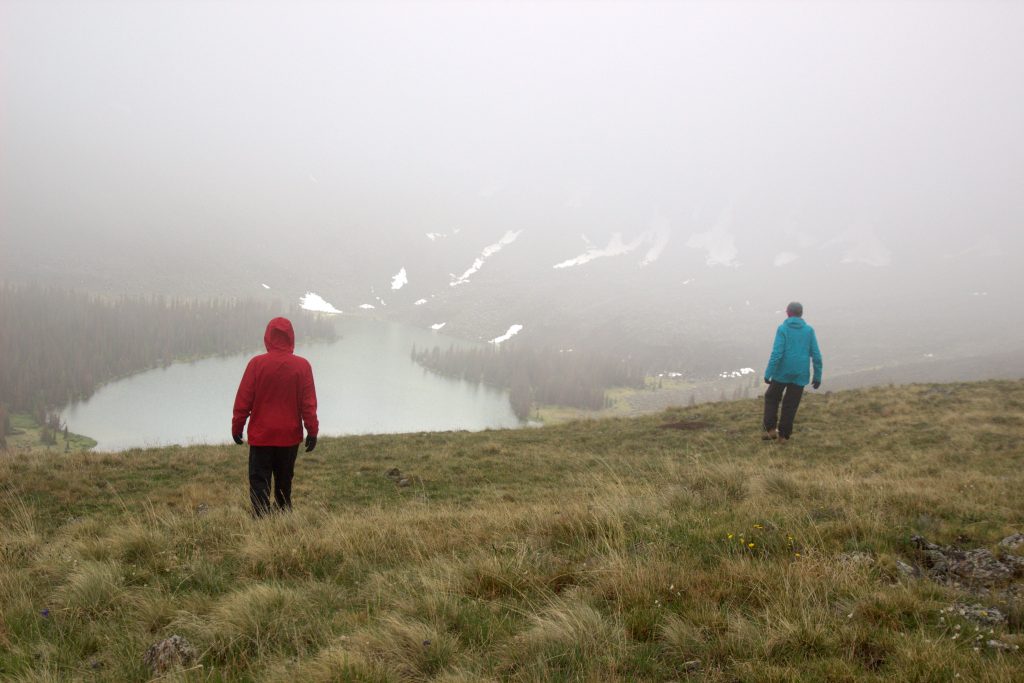 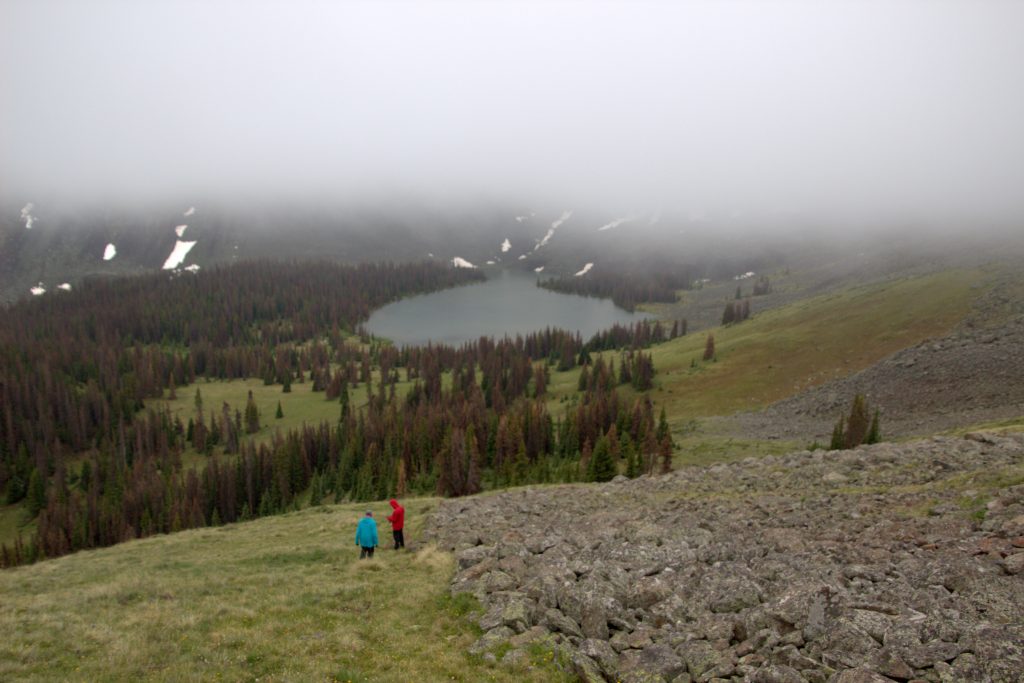 The next morning it was still overcast. We climbed again up the grassy slope to the top of the plateau. From the top, we could see the black shape of a moose grazing below next to the lower lake. We hiked on the mesa top above the cliffs on the edge of the basin and south onto the Calf Creek Plateau, which was an enormous expanse of flat, rocky tundra. We spotted an elk watching us in the distance from where we had come. High on the plateau, we found outstanding views of the Uncompahgre Massif with the distinctive Uncompahgre Peak dominating the scenery. After hiking for a mile and a half, we came to the edge of a ridge where we could see Devil's Lake in the distance several hundred feet below us, situated in the sweeping, treeless landscape of the open tundra.  We climbed down to the lake, although the trail was soon lost in the grass and marshland below.  At the lake, I told the group we could not linger because of the gathering dark clouds above us.

On a previous trip, a morning storm had caught a group I was leading high on the open Mesa.  We hurried to a ravine and crouched, spread out in the gully, as the thunder and lightning and heavy rain passed over head.  I did not want this group to have that experience.

We struggled to find the trail again up through the boulders to the top of the plateau.  We scrambled straight up until we finally found the trail near the top.  When we got back to the plateau, the clouds broke some and we took our time across the Mesa. I got behind the group and when I caught up with them above the grassy slope we were to descend to the lake, they pointed out the iron black clouds behind me.  Thunder boomed and on the way down a deluge of hail and rain caught us, and back at camp, the ground was white, covered with hail stones. In the evening, the clouds broke for a beautiful evening. 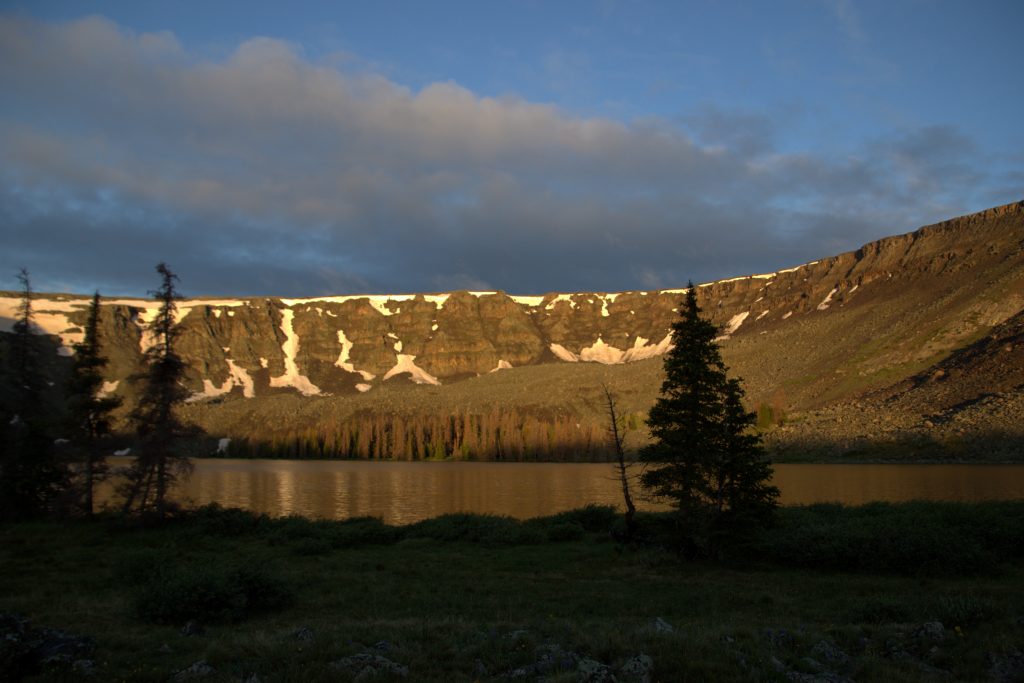 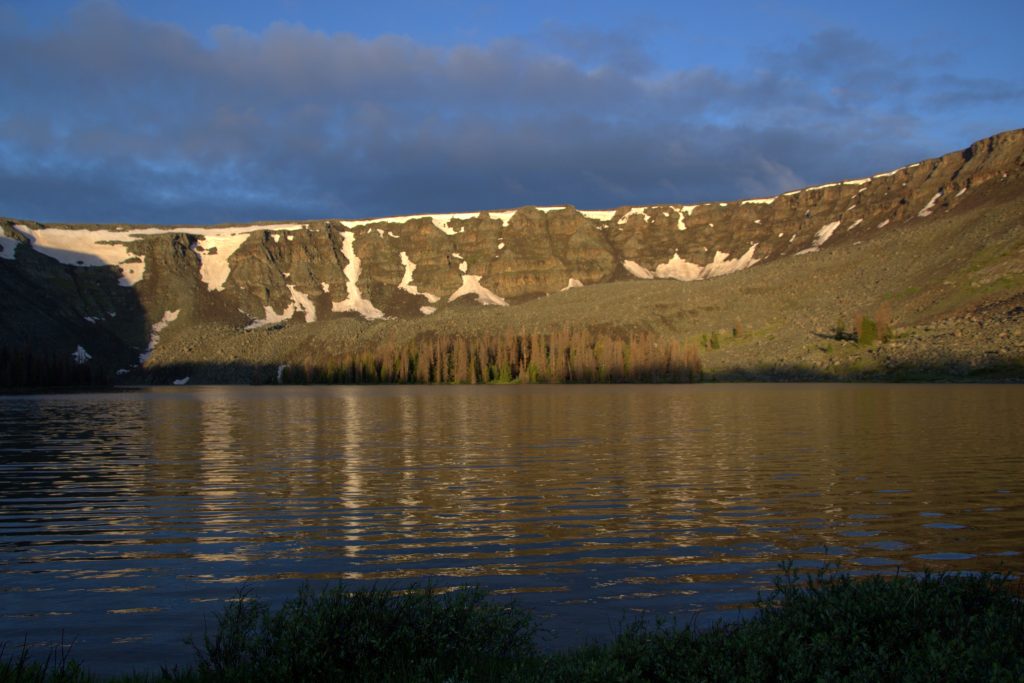 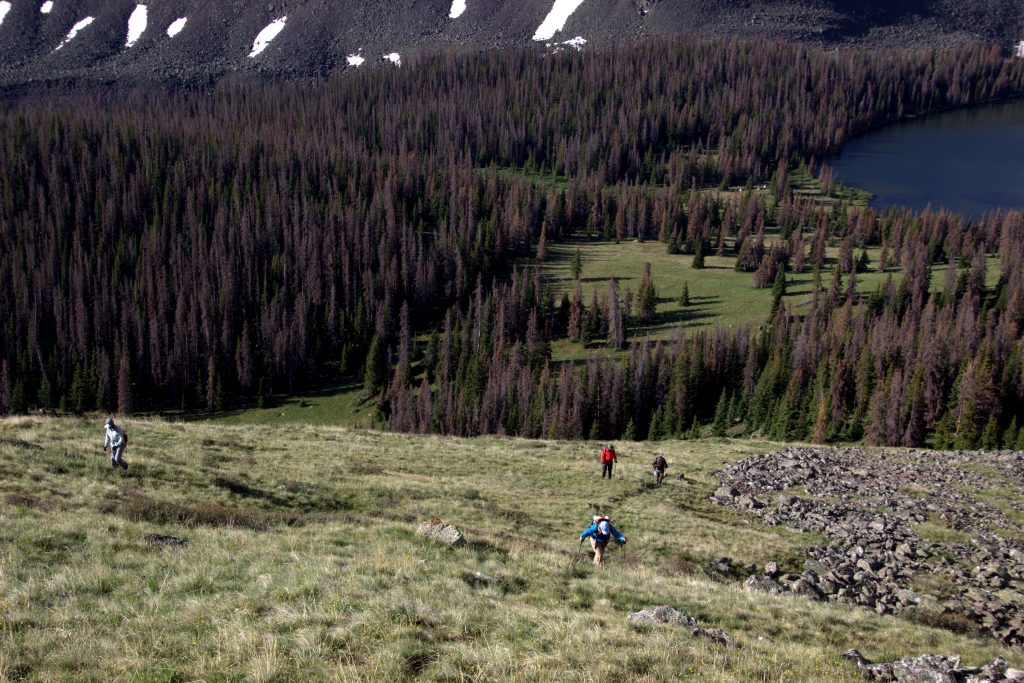 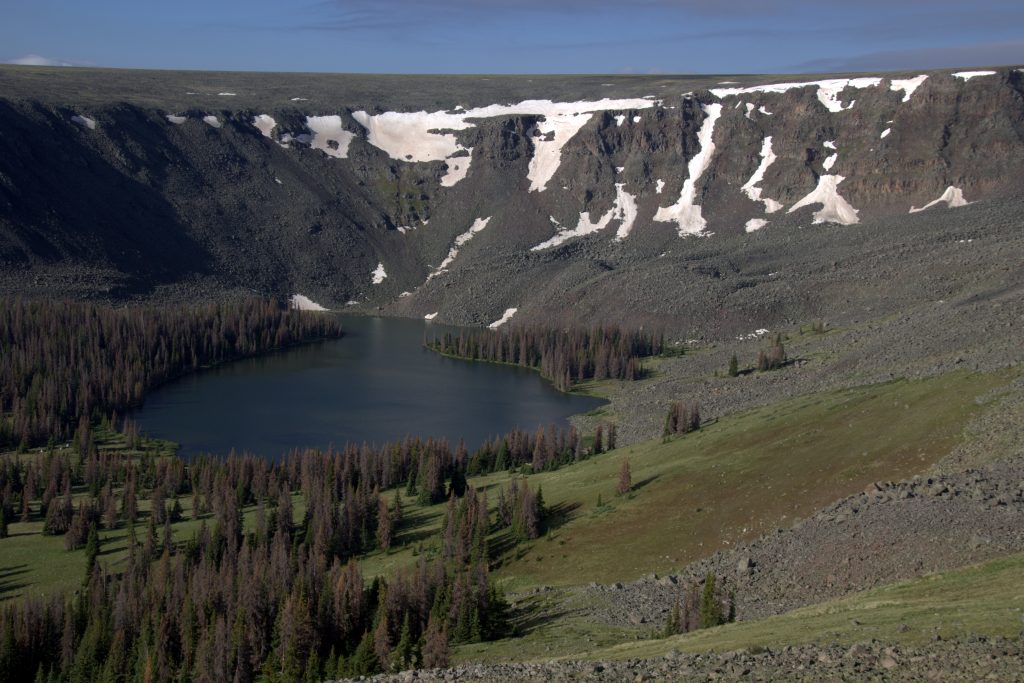 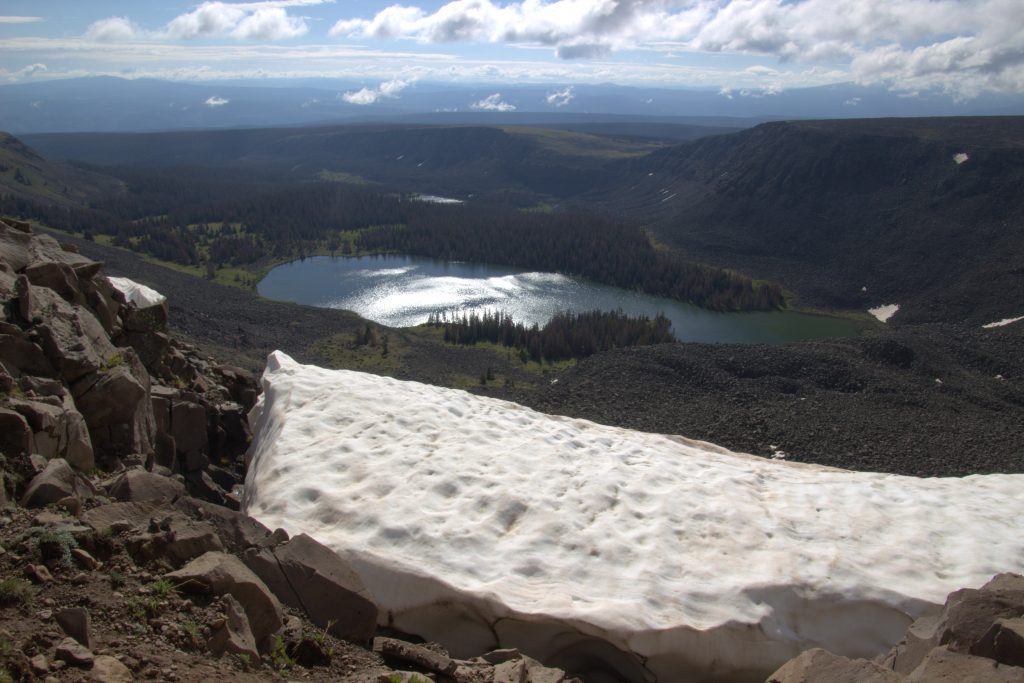 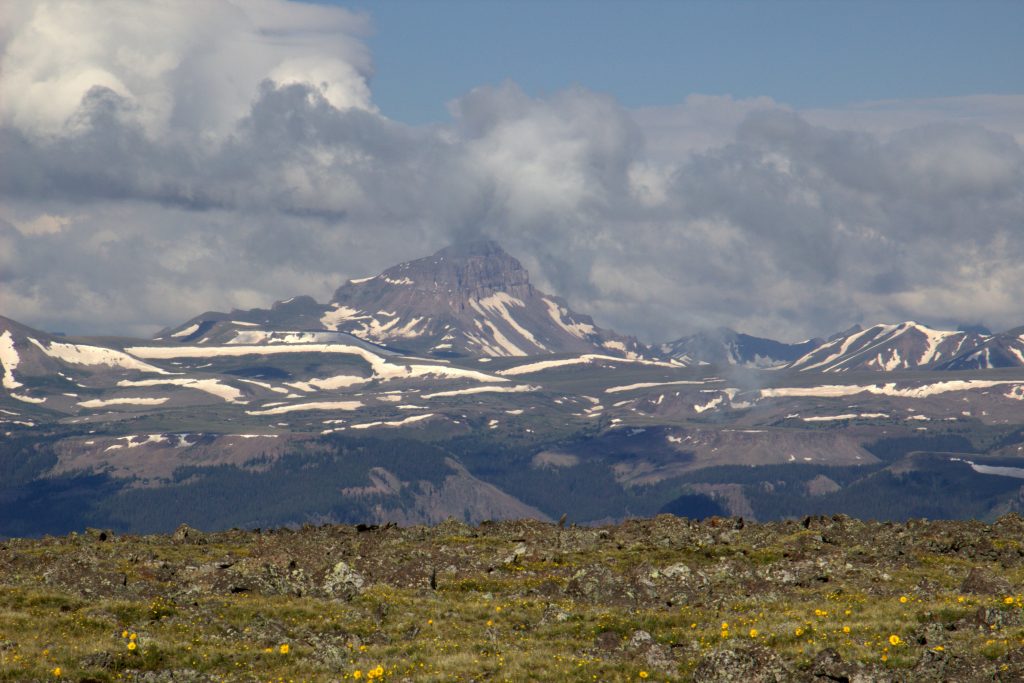 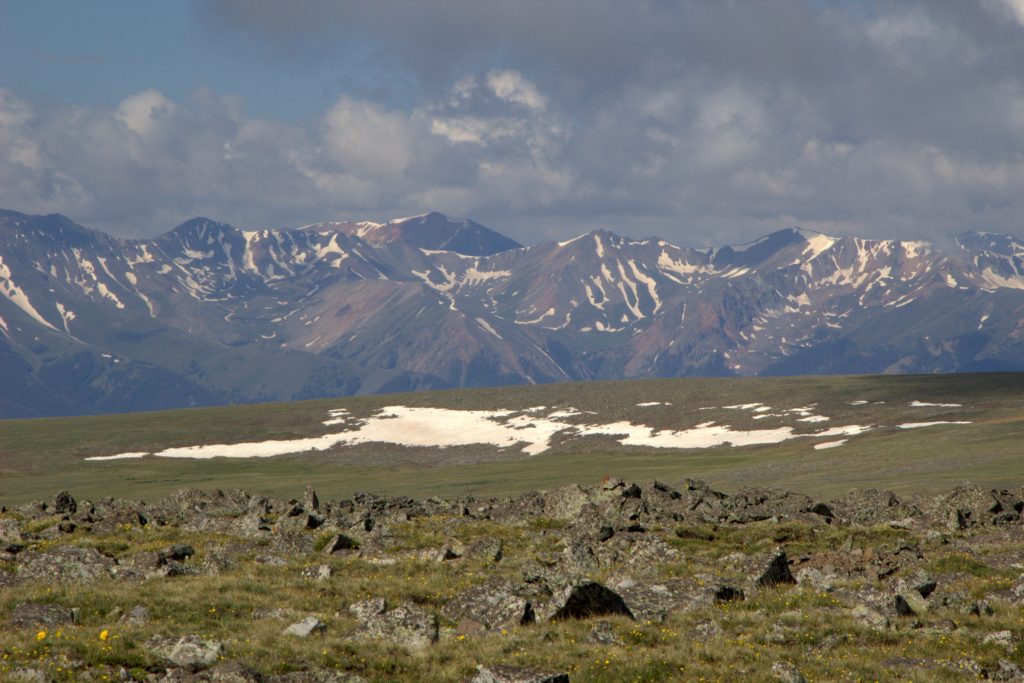 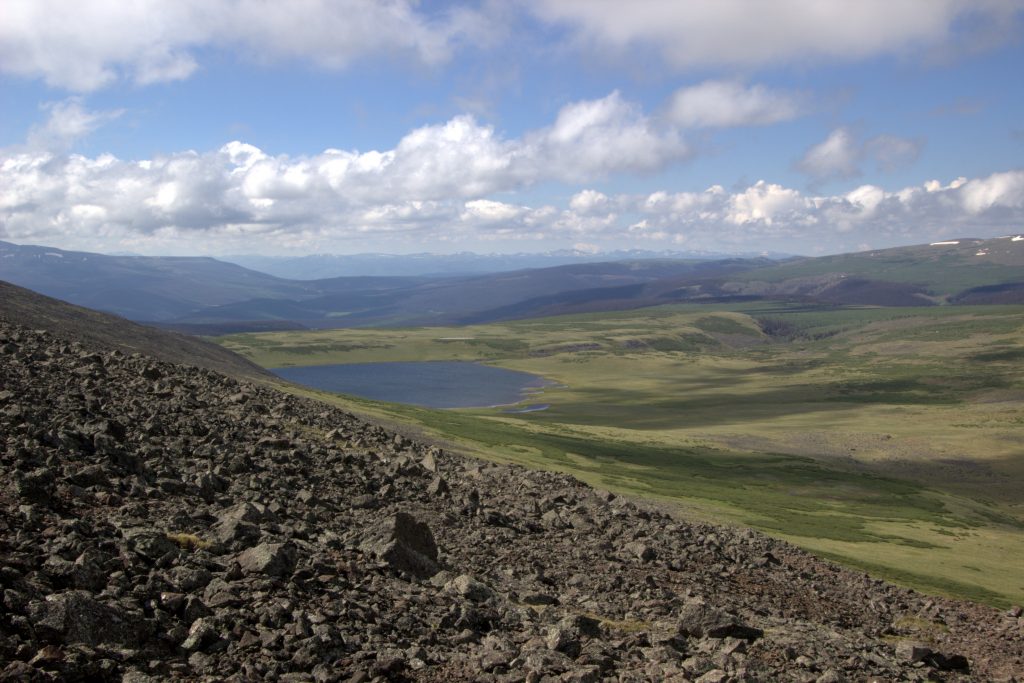 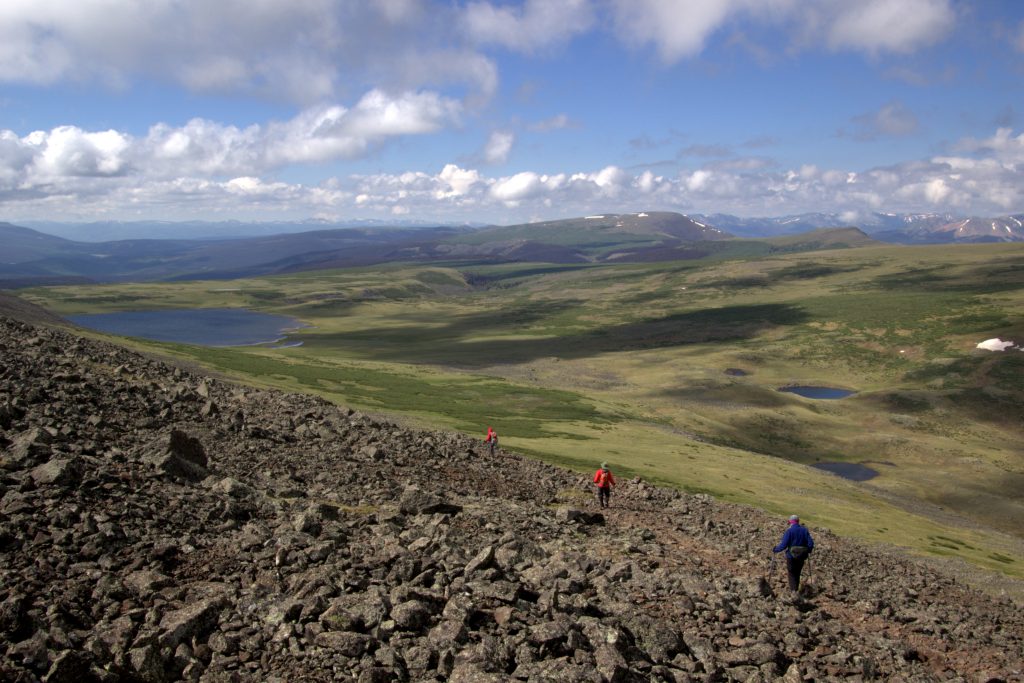 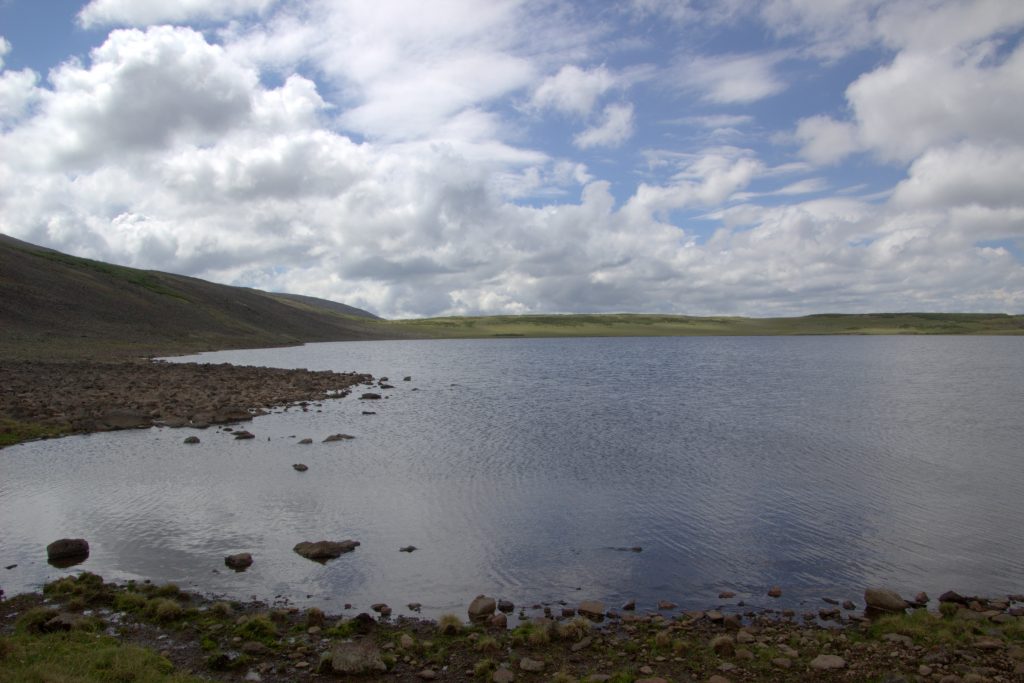 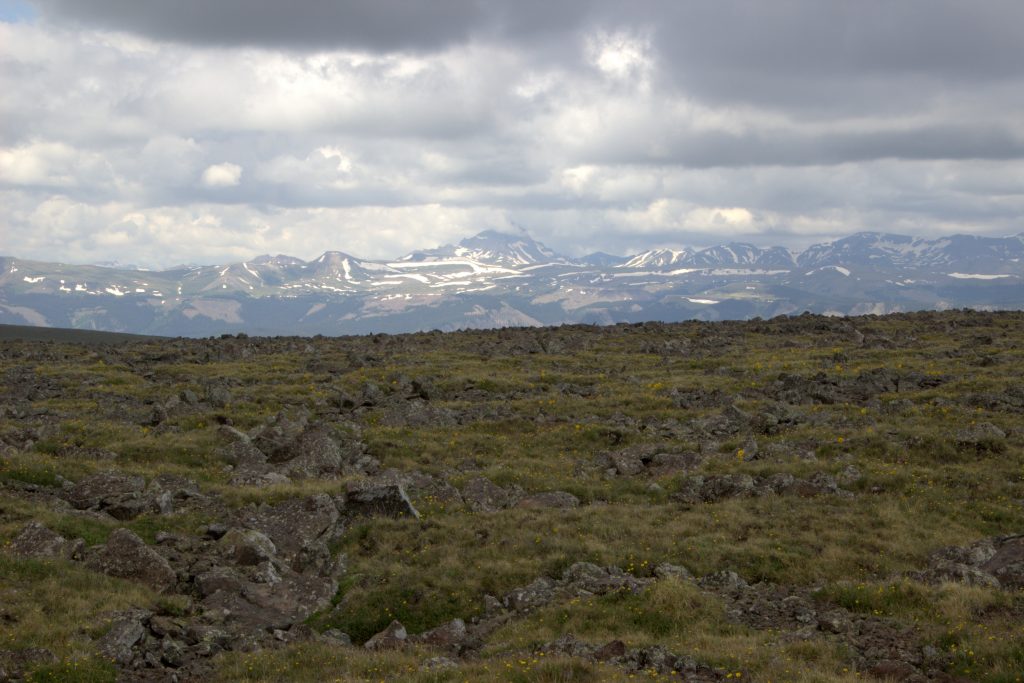 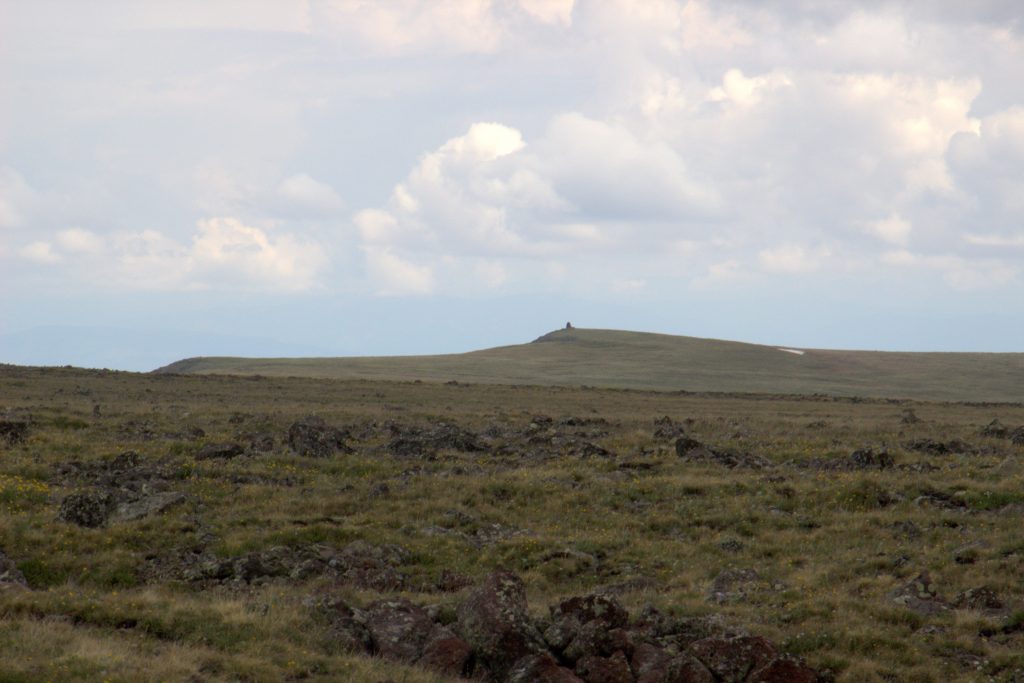 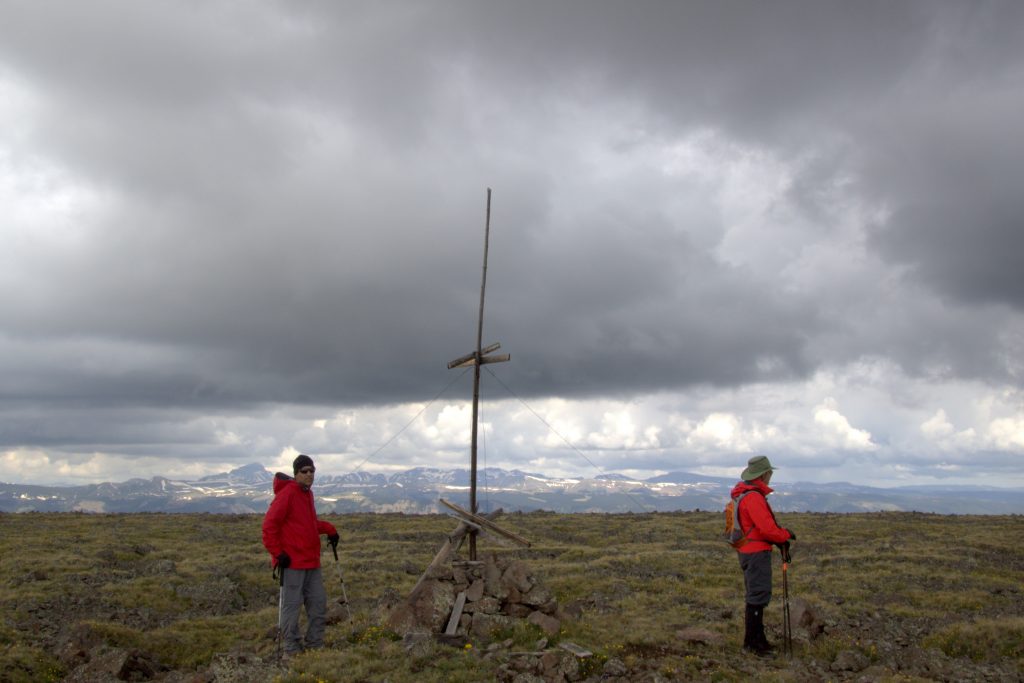 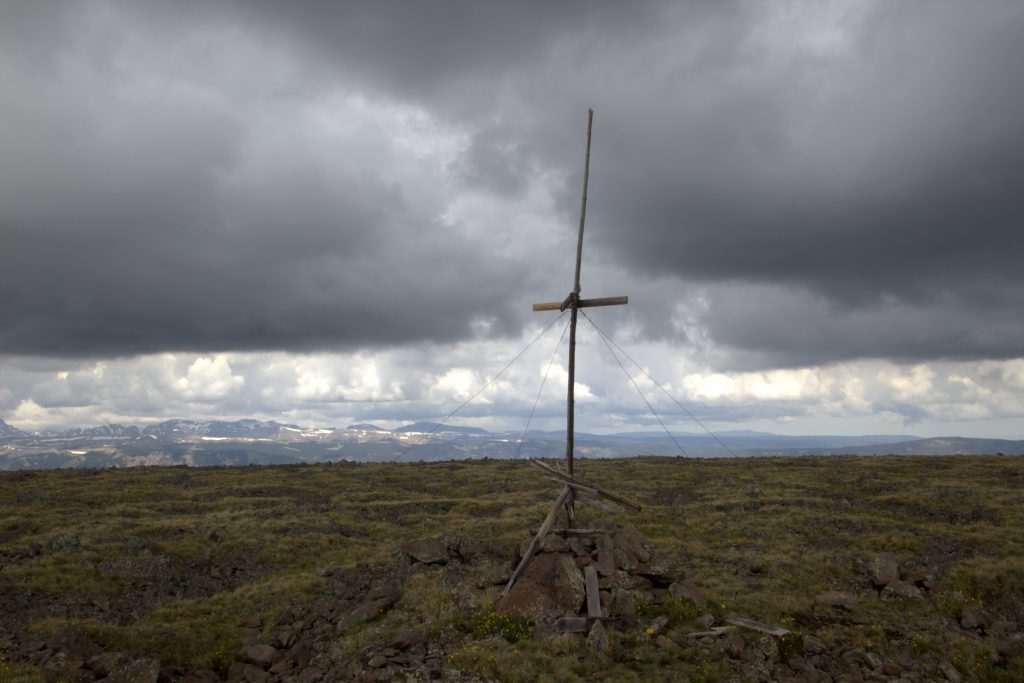 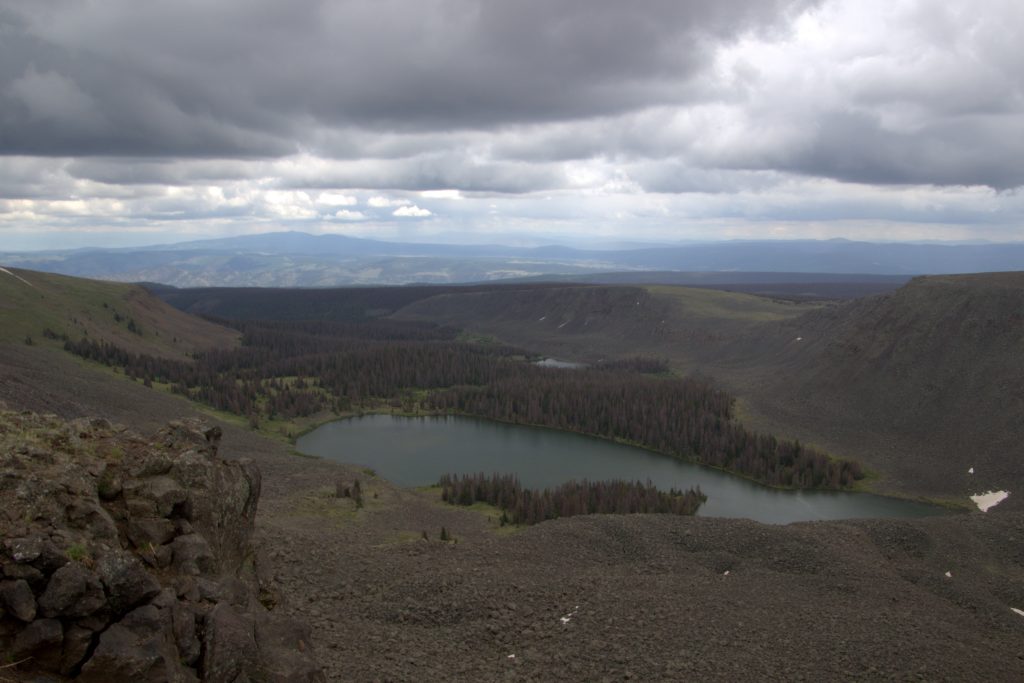 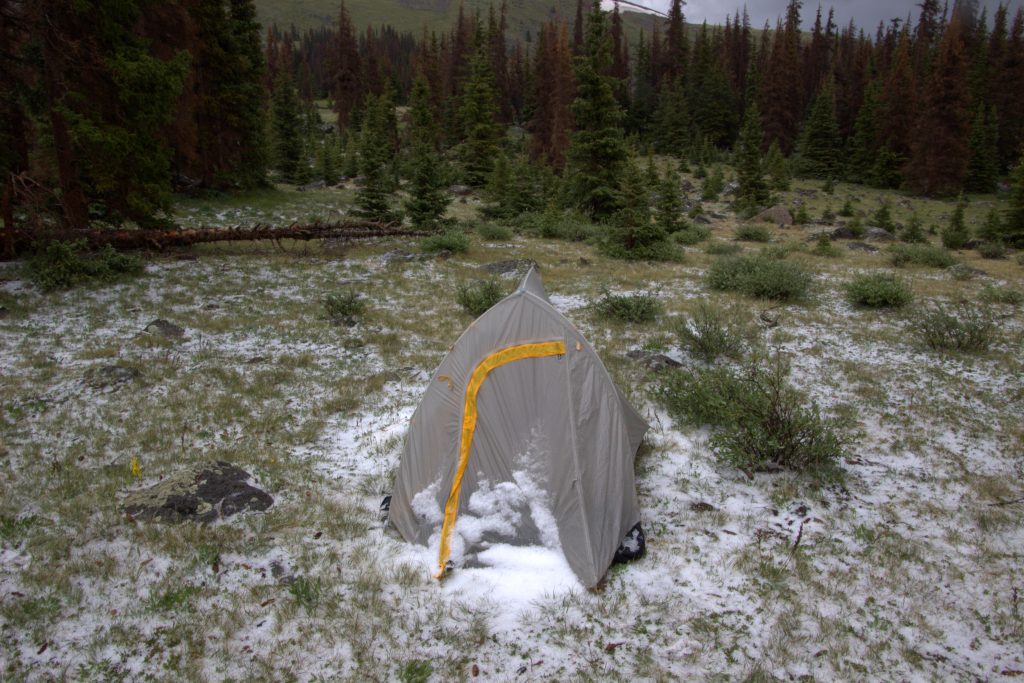 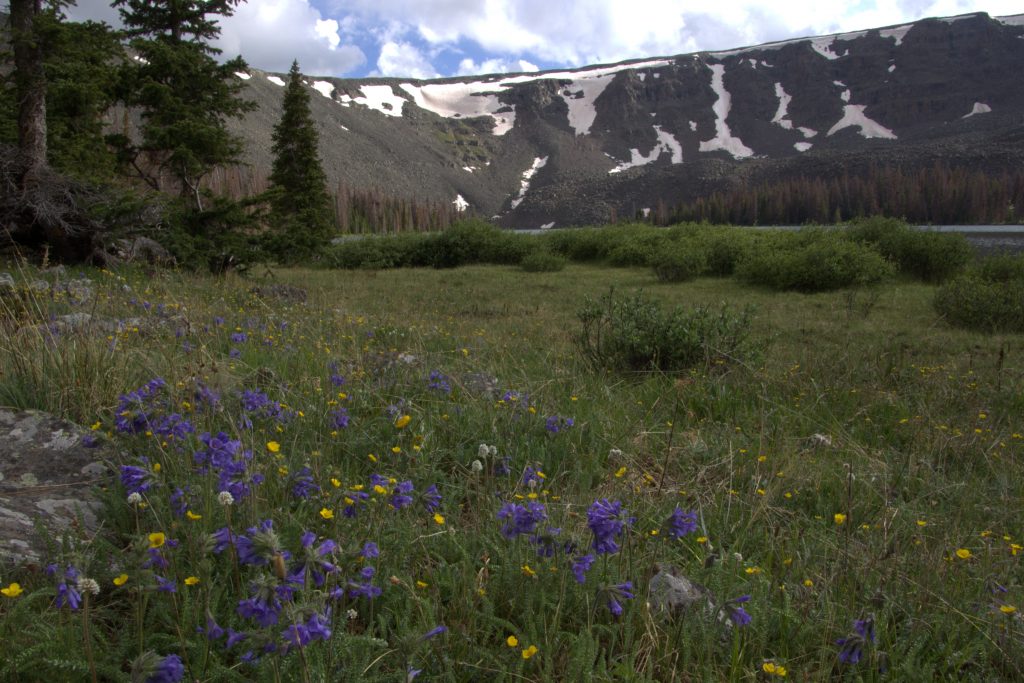 The second morning, we awoke to clear, deep blue skies, so typical of high country mornings. Hiking back to the trailhead, we rounded a bend on the lower lake and saw the female moose in front of us. We quietly observed and took pictures, but the moose spotted us and began to look at us with apparent concern. I was not sure what to do but felt on instinct that the best thing would be to continue walking quietly by the animal on the trail, in order to quickly get out of its area.  So we walked on, perhaps getting too close, but quickly leaving her behind.  As we continued, she moved to a more distant, safer location.

The rest of the hike was sunny and lovely. The six people I was with were experienced and highly competent backpackers, and with no problems whatsoever, it was a pleasure hiking with this group. Back in the first meadow, I spotted some rocks on a high point above, so we dropped our packs and walked the short distance across the meadow to that place. On the rocks, a vast expanse of landscape opened in front of us to the west, north and east with the Uncompahgre Massif to the west, the West Elks Mountains to the north, and the La Garita Mountains back across the meadow to the south.  In this enormous, sweeping view, we could see no signs of human existence. 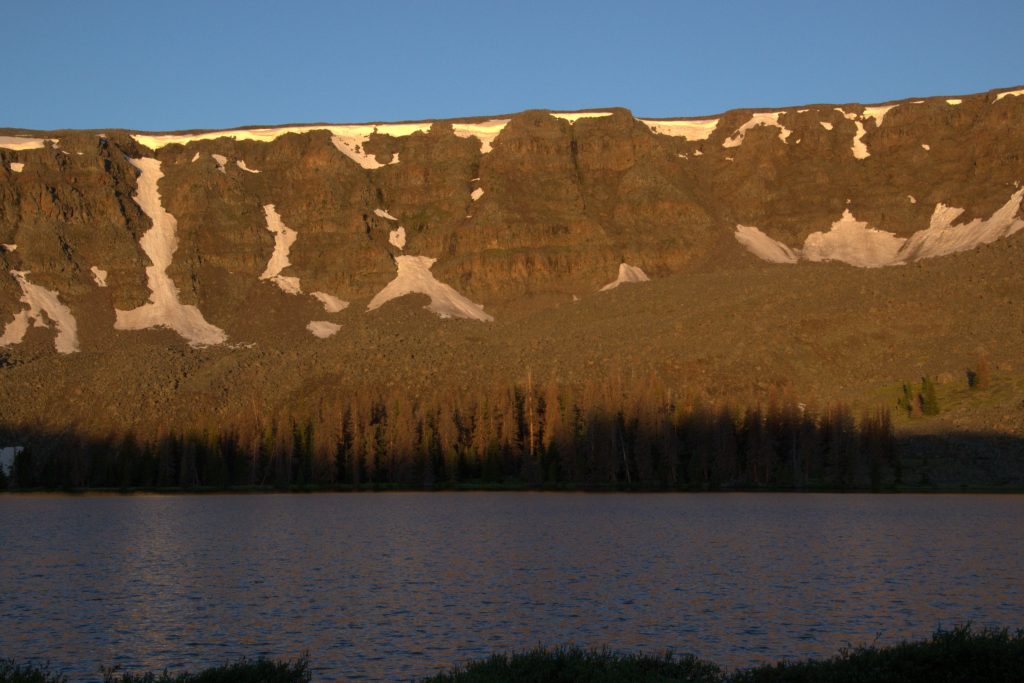 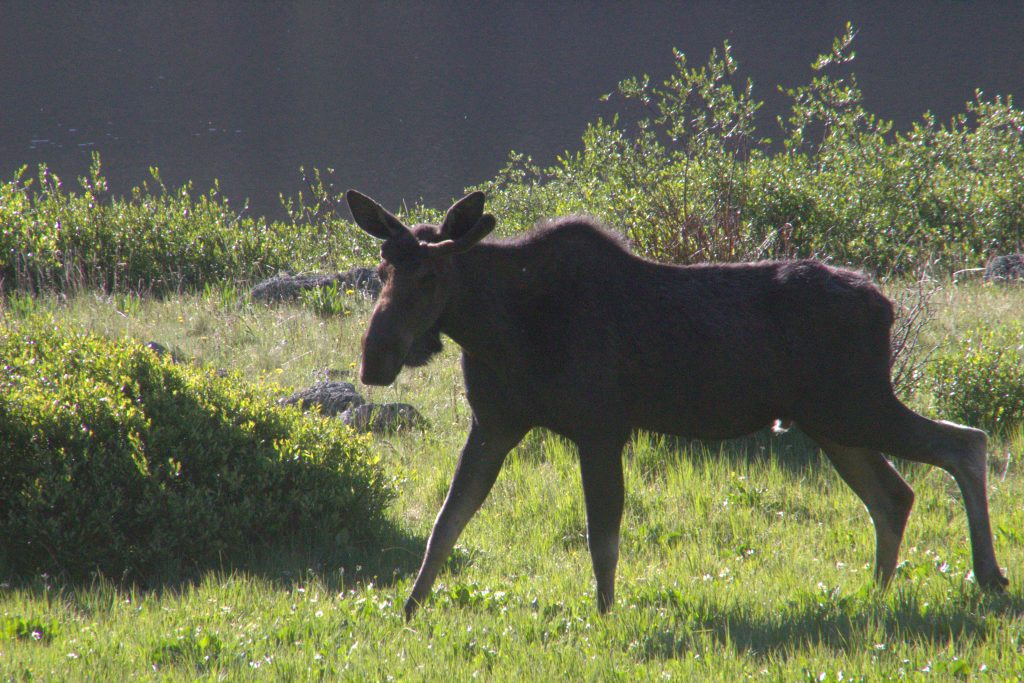 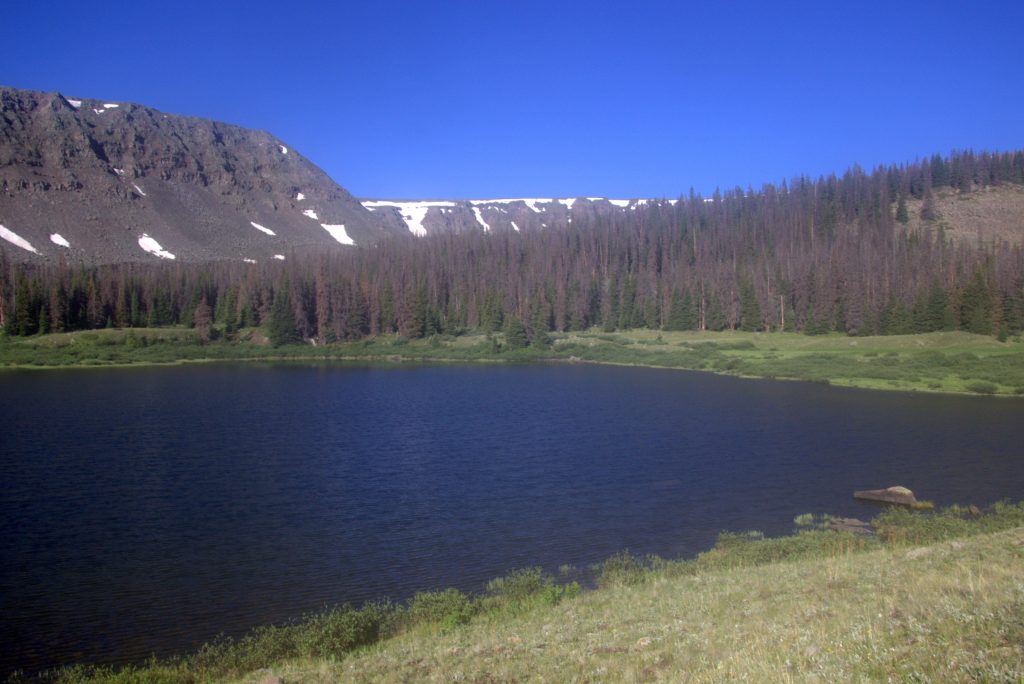 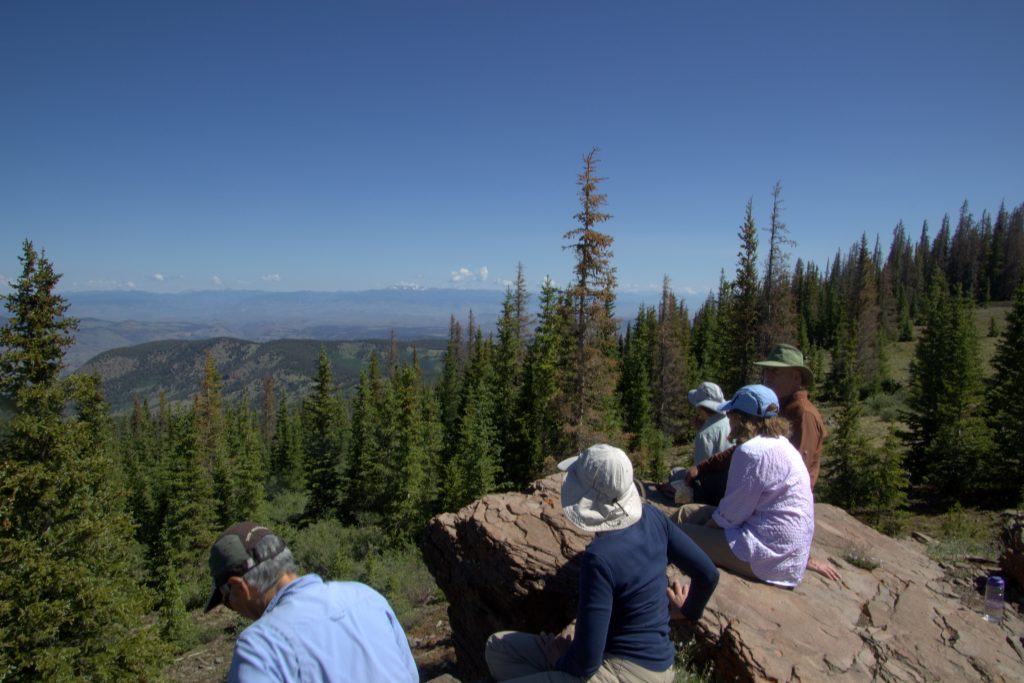