Over the 4th of July weekend, I led a backpacking trip I call "Best of Lost Creek." The six of us left Denver on July 2 under heavy grey clouds and there was fog in the foothills, but by the time we got over Kenosha pass there was some sun. We began hiking up the Wigwam Trail, which was relatively flat for most of the hike. While crossing a large, open area we saw that the clouds were darkening and we began to hear thunder. We got back to the trees and stopped in the edge of the forest to eat lunch. While we were eating, the storm hit with loud thunder, lightning and heavy rain. The storm stopped, and we continued with a gradual climb up to Wigwam Park, where we crossed the stream by walking on a beaver dam and camped on a small ridge top.

Friday, we had our big hike. As we started to leave our campsite in Wigwam Park, we saw a male moose with antlers just below us and one of our group spotted a second moose further away. We first climbed gradually on the Goose Creek Trail through forest, wet meadows and then to the high ridge top covered with smaller aspen and evergreen trees. We stopped on some large boulders at the highpoint where there was a long view down the Lost Creek valley which contained various shapes of rock formations rising above the forest below. We descended a long way down into Refrigerator Gulch, where we had an extended break in a lush green meadow with views up to the finely carved rock formations on the ridge above the valley. Before our final descent to Lost Creek, I took the group off trail for fifty yards to a large rock platform which I had found a number of years ago and which I called "Bob's Spot." From the platform, there is a wide-angle view of the seeming infinity of tortured granite shapes of the upper Lost Creek Canyon. 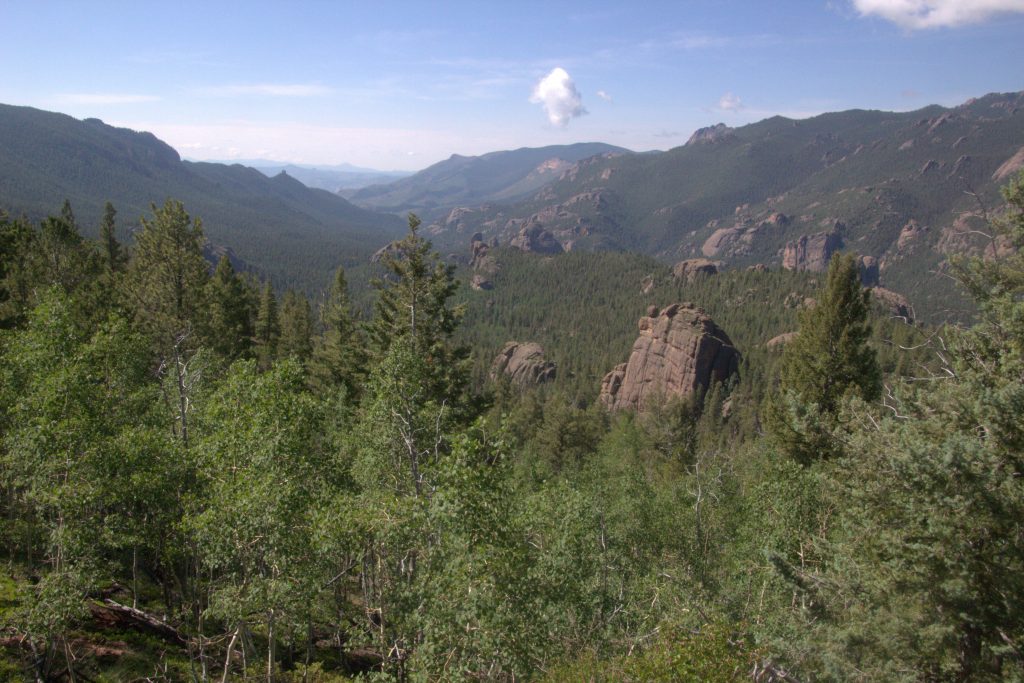 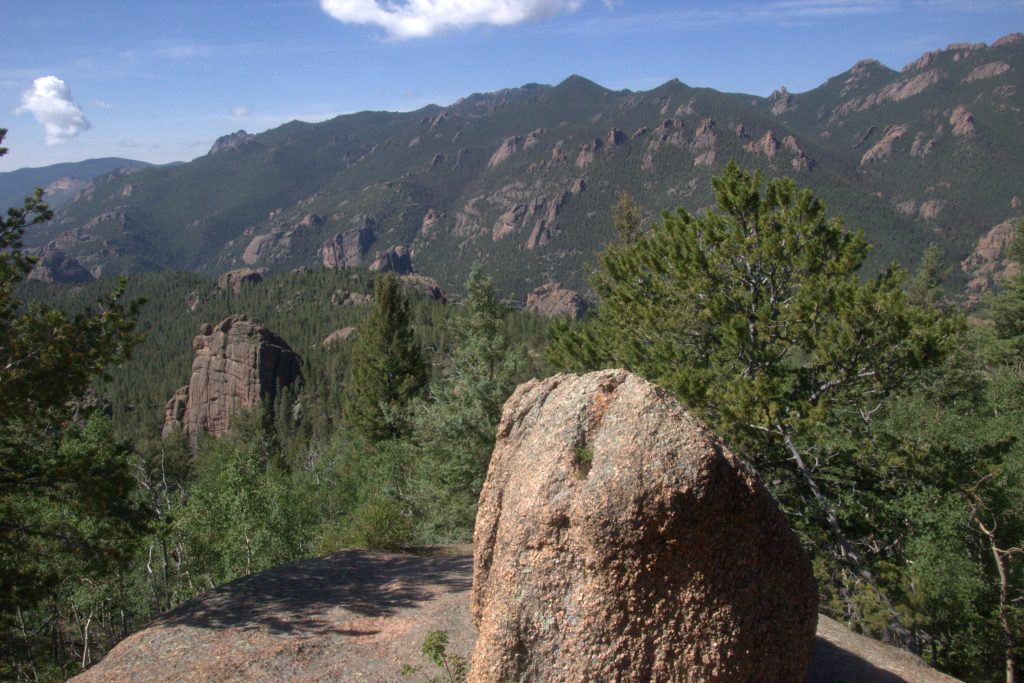 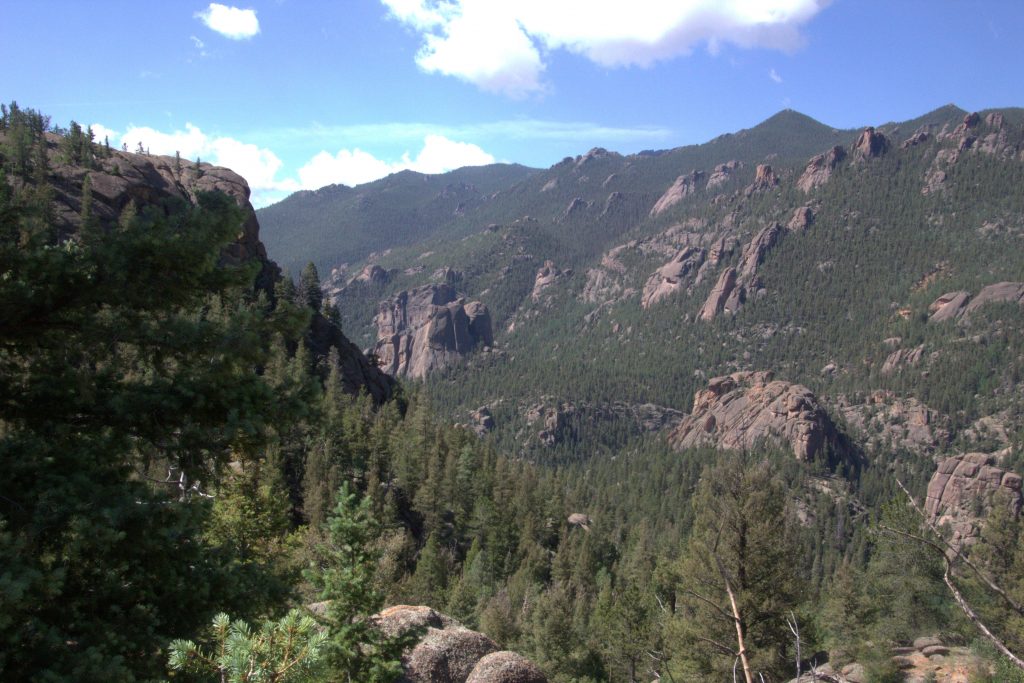 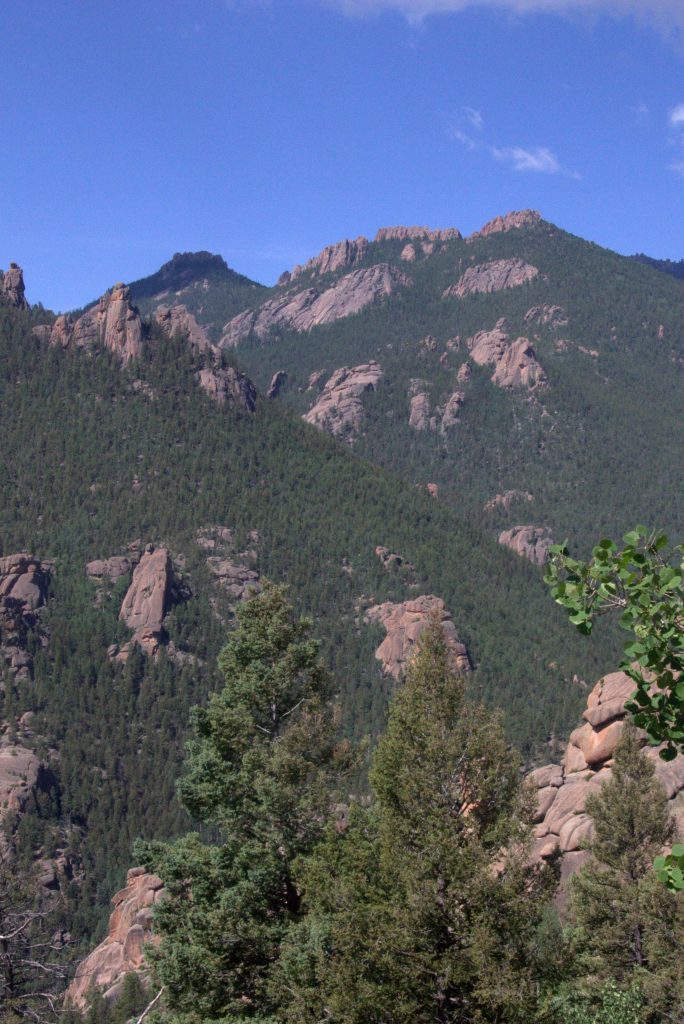 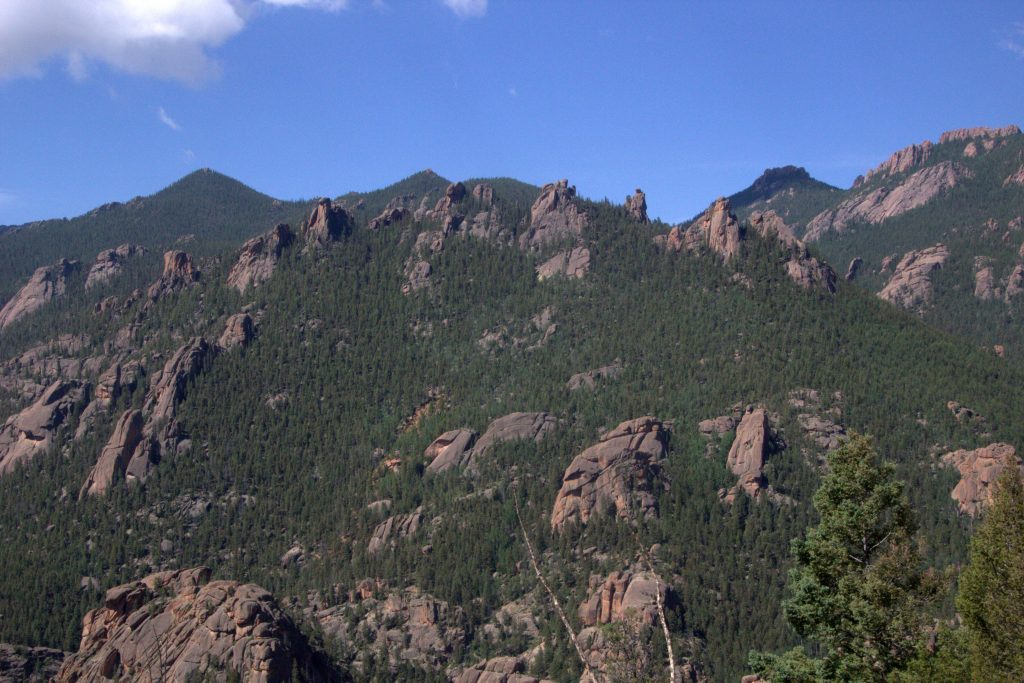 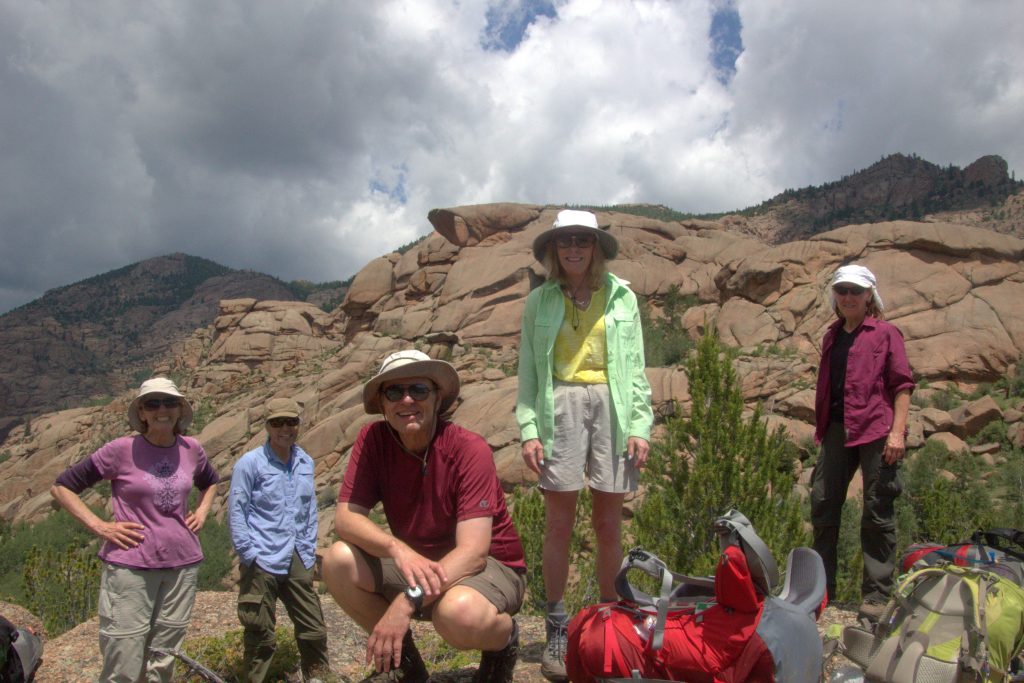 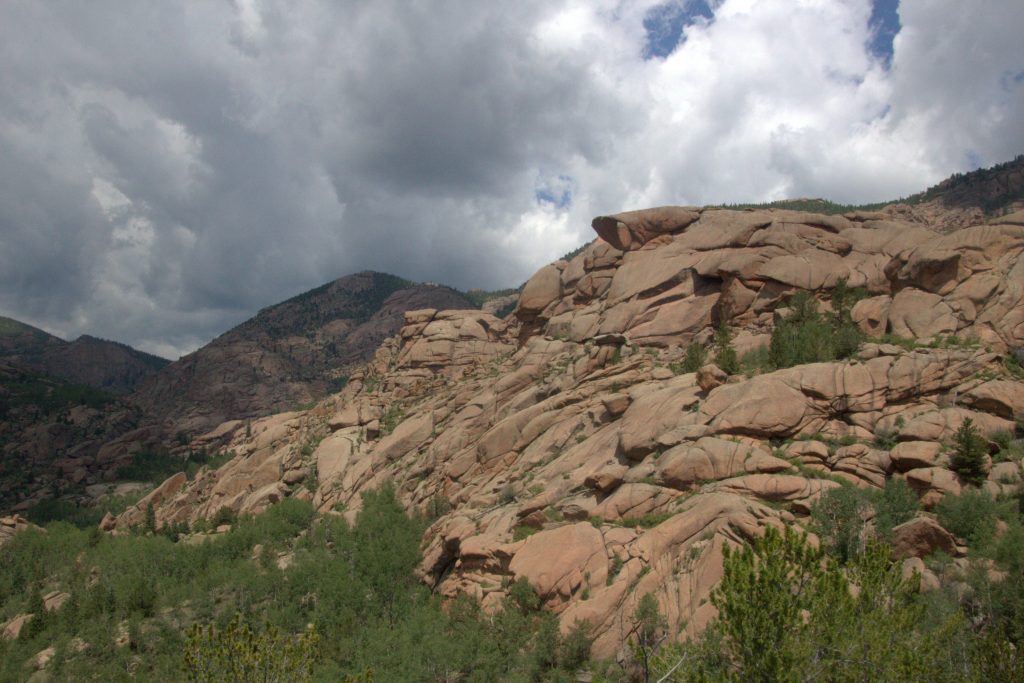 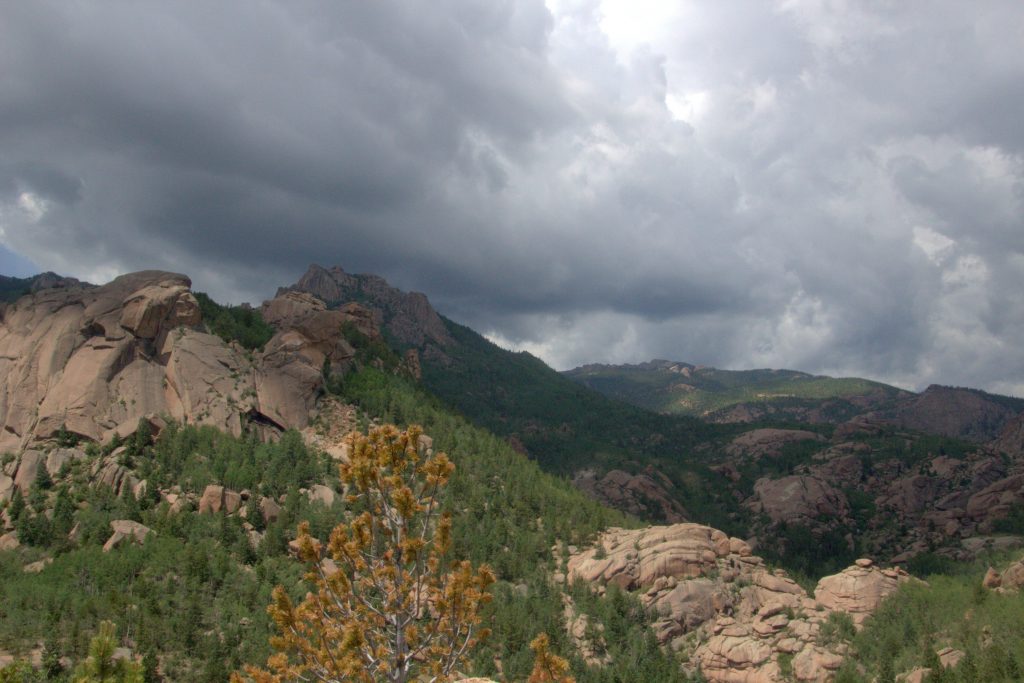 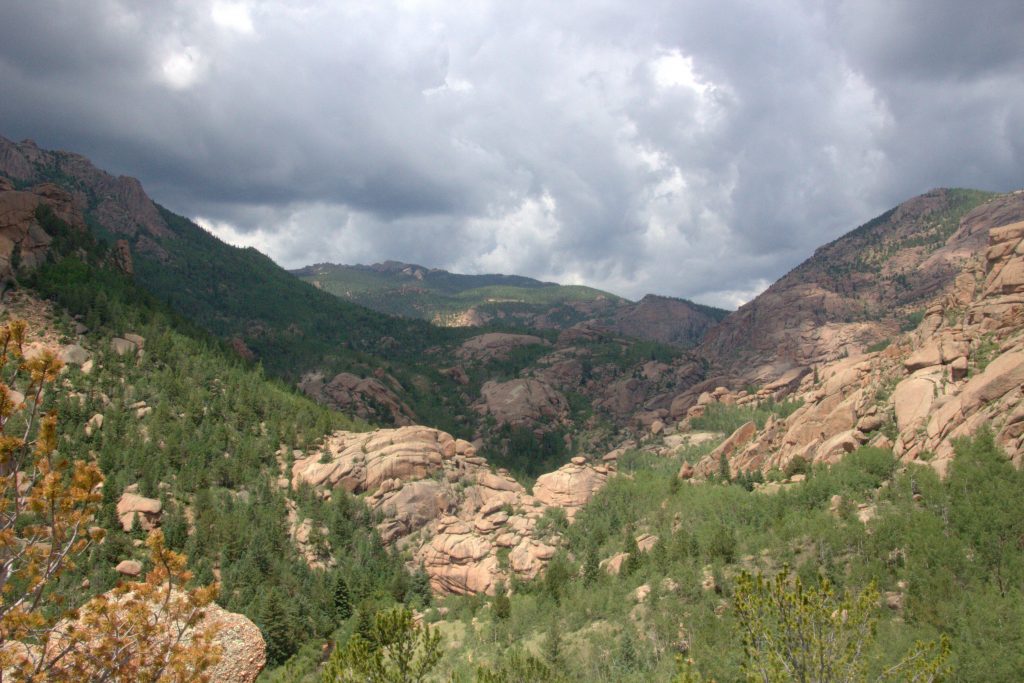 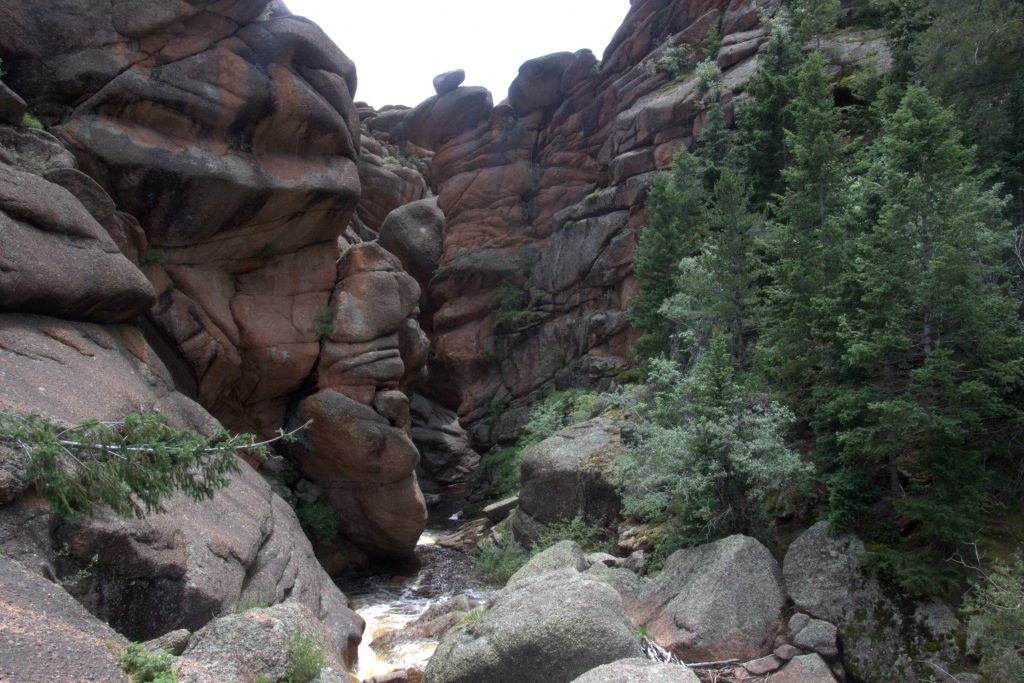 After getting down to Lost Creek, we stopped to admire the slot canyon, with its dough-shaped walls, where Lost Creek disappears, or is "lost", beneath the rock formations. Shortly after that, we arrived at the spot on the trail where we had to cross the creek. The last time I had crossed there was a good bridge consisting of three sturdy logs which one could easily walk across. However, the heavy spring rains and heavy snow melt had washed the bridge away. There remained one smaller log partly collapsed at an angle into the water. We had been told by others that there was a place to ford the stream a short distance downstream, so we began the involved process of wading Lost Creek. The crossing was approximately thirty feet across with rapidly moving water. We began an elaborate process to get everyone through the three feet deep water. The process involved a rope and my helping people across. After eight crossings, I was actually getting used to the frigid water. After the crossing, we hiked a long and exhausting climb up to a campsite below McCurdy Park.

We awoke on July 4th to cloudless blue skies. We hiked gradually up to the junction with the Brookside McCurdy trail and started climbing west on that trail. We climbed through forests and extended stands of aspen with views back to the sharply broken ridges above Lost Creek. When we reached the crest, the South Park Valley and the Mosquito Range of snow-capped mountains were laid out in the distance in front of us, with a twisted and broken granite pyramid in the foreground and forested mountains just behind. We all stopped for some time to admire the view. We were near McCurdy Peak and began a traverse around the shoulder of McCurdy and on to Bison Peak, the highest mountain in the Lost Creek Wilderness. As we hiked, we passed many monumental rock formations, fractured into unimagined shapes. From the low point on the traverse, we began the climb up to the ridge on the shoulder of Bison Peak. As we started, we saw a group of several mountain sheep running towards us in the direction we were walking. When they saw us, they swerved downhill to the west and ran into the forest. We climbed up through bristlecone pines to the ridge just below the summit of Bison Peak. We climbed out of the forest and onto the open ridge where there was a 180 degree panoramic view of Colorado. From there we descended to Bison Peak and on down into the Indian Creek Valley and decided to hike the remaining three miles out to the trailhead. In all, we backpacked 30 miles with 4,300 feet of total elevation gain. 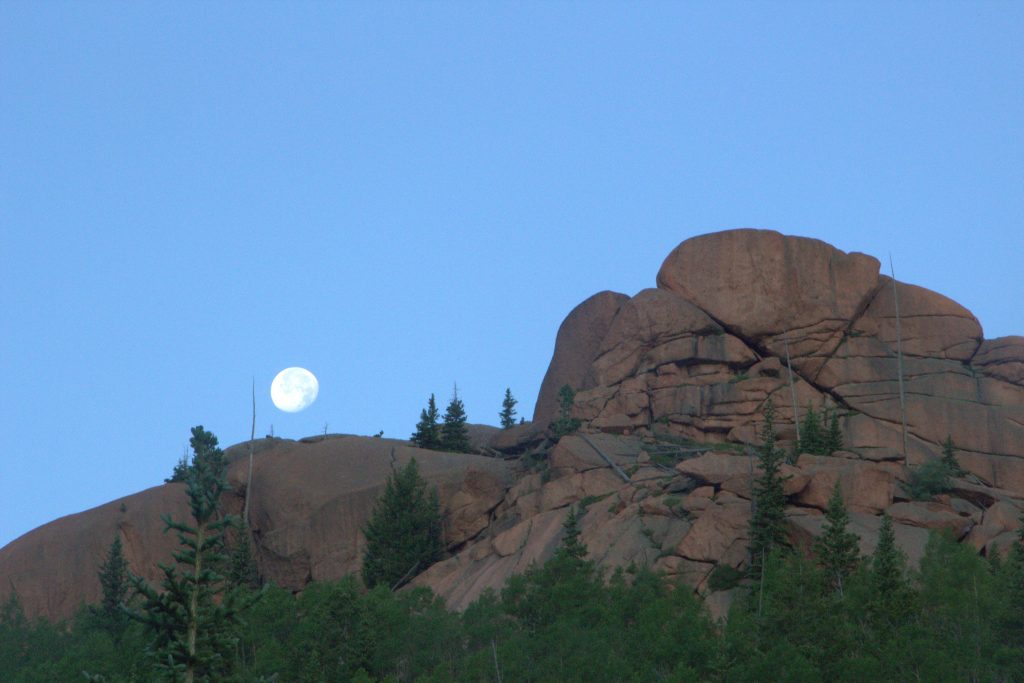 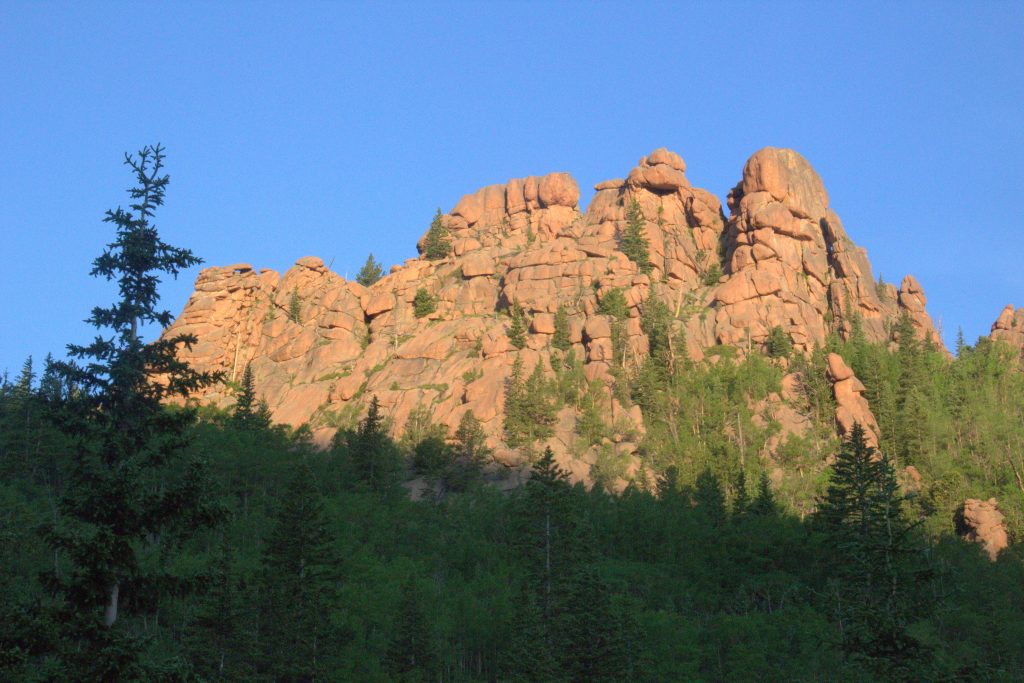 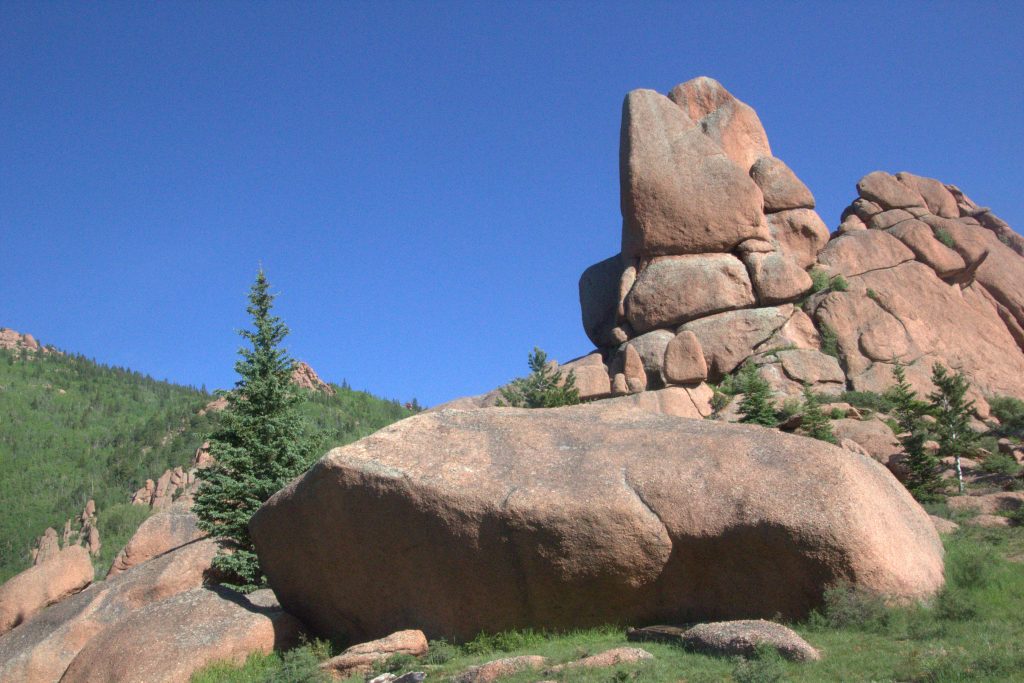 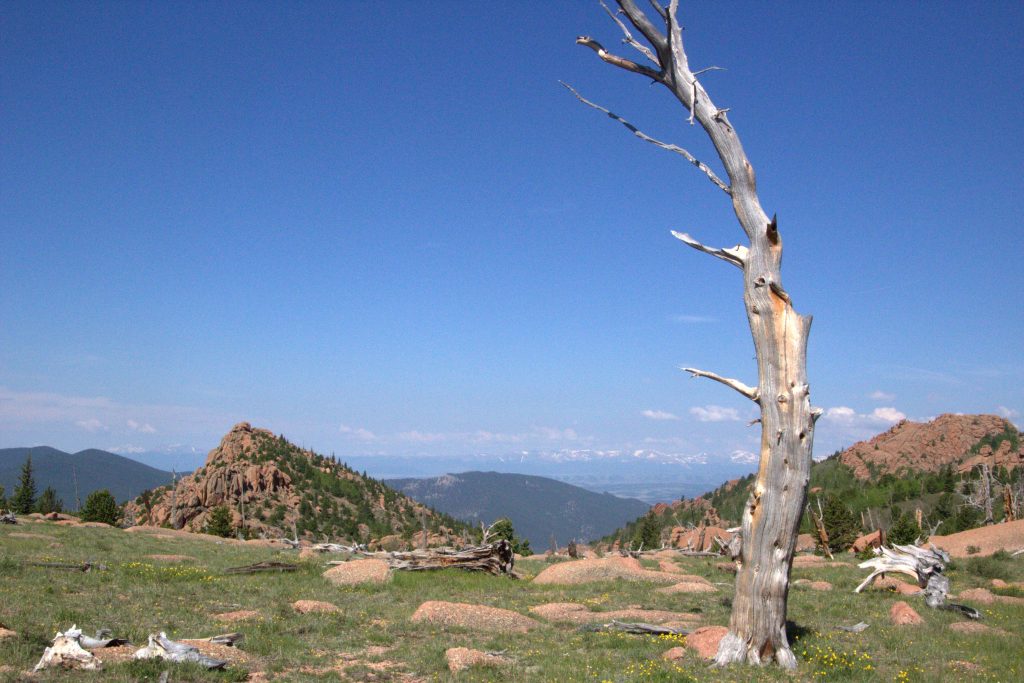 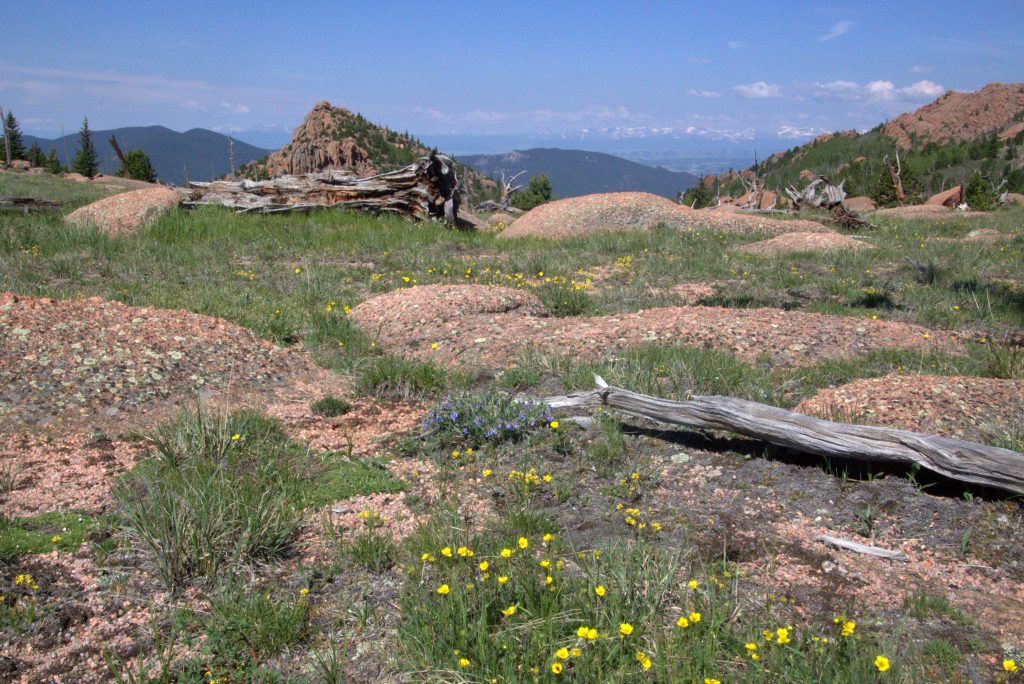 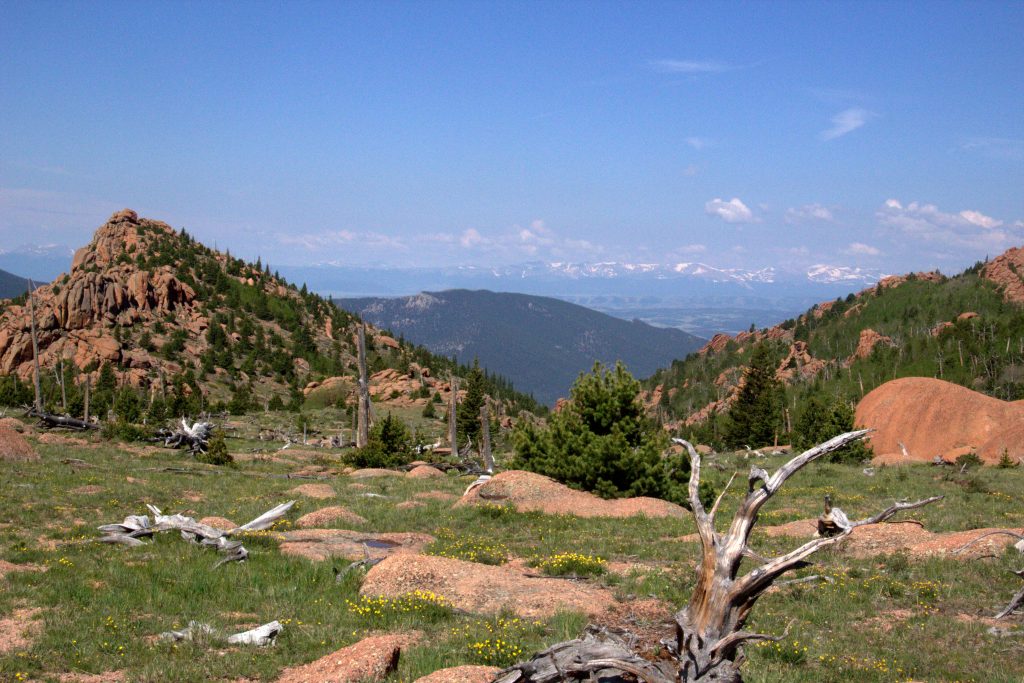 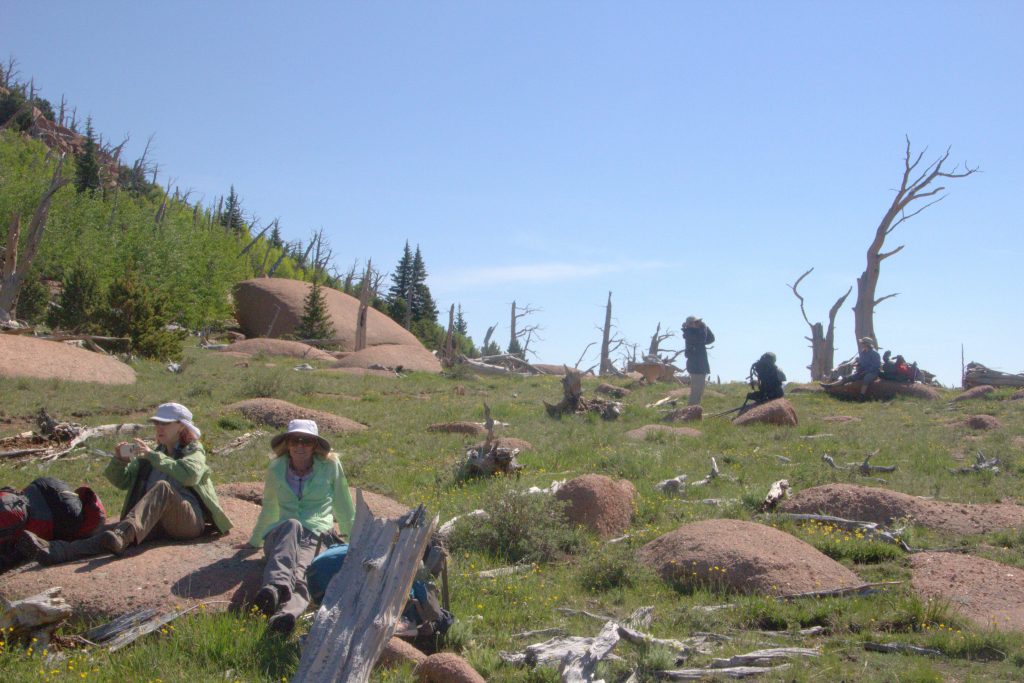 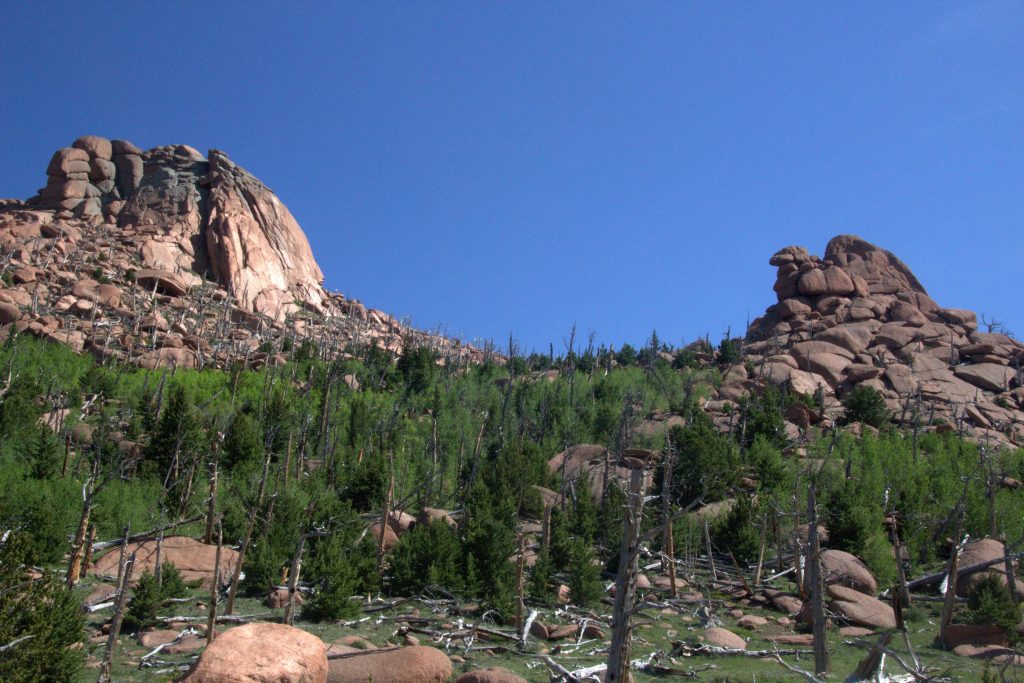 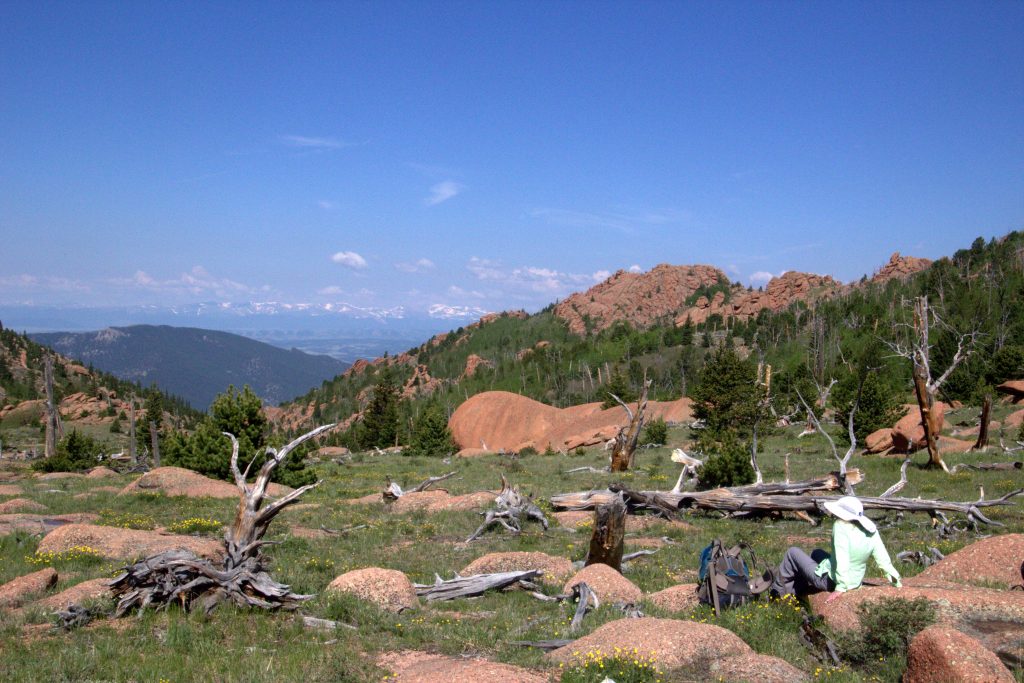 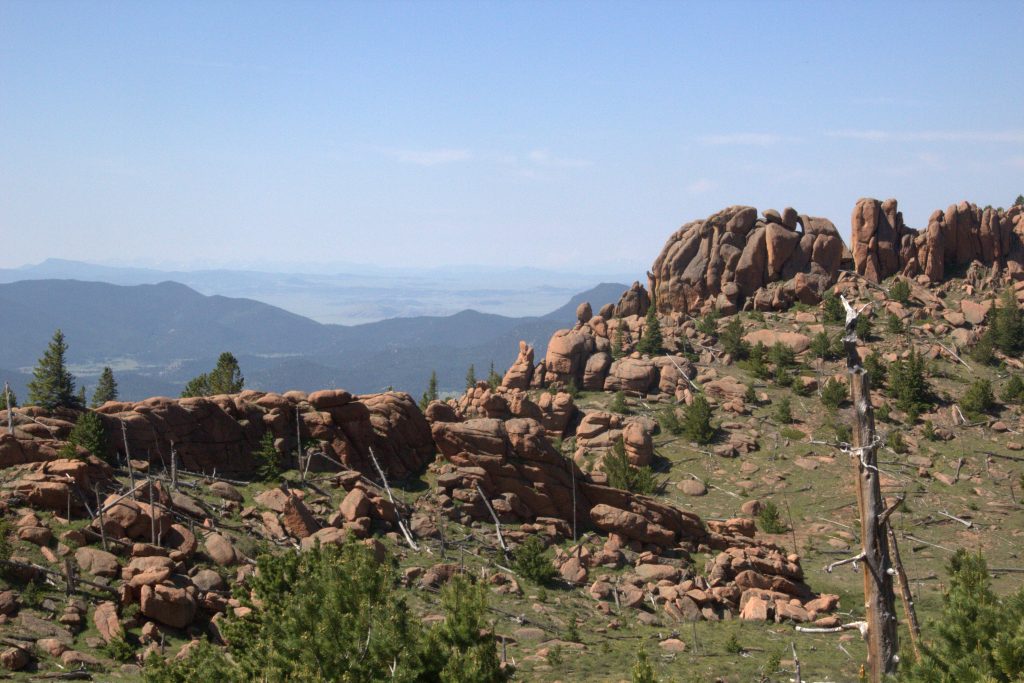 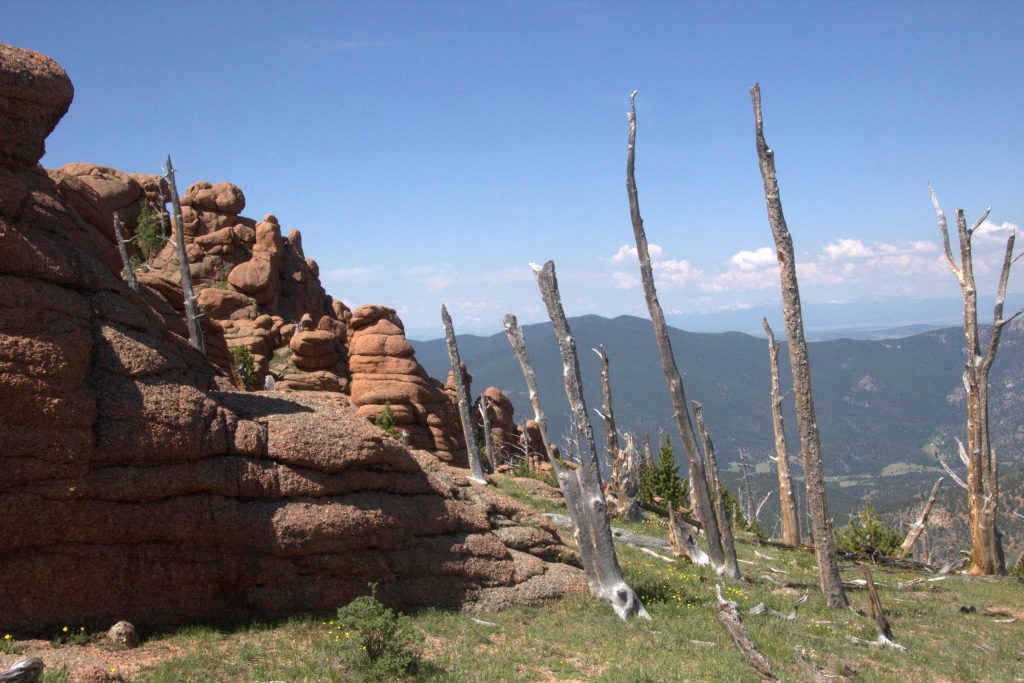 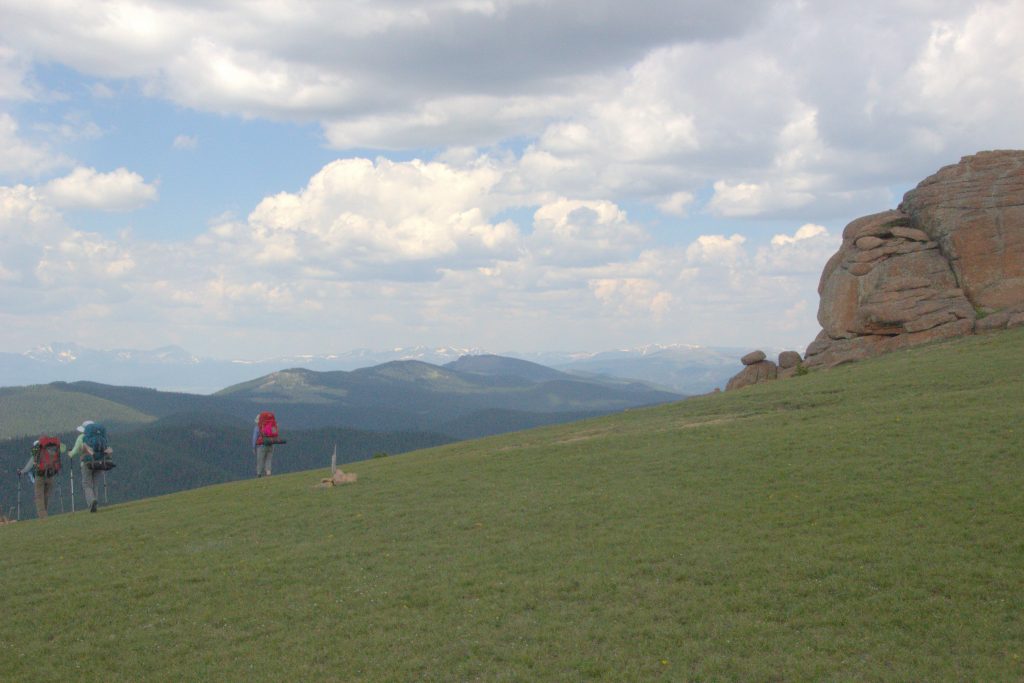 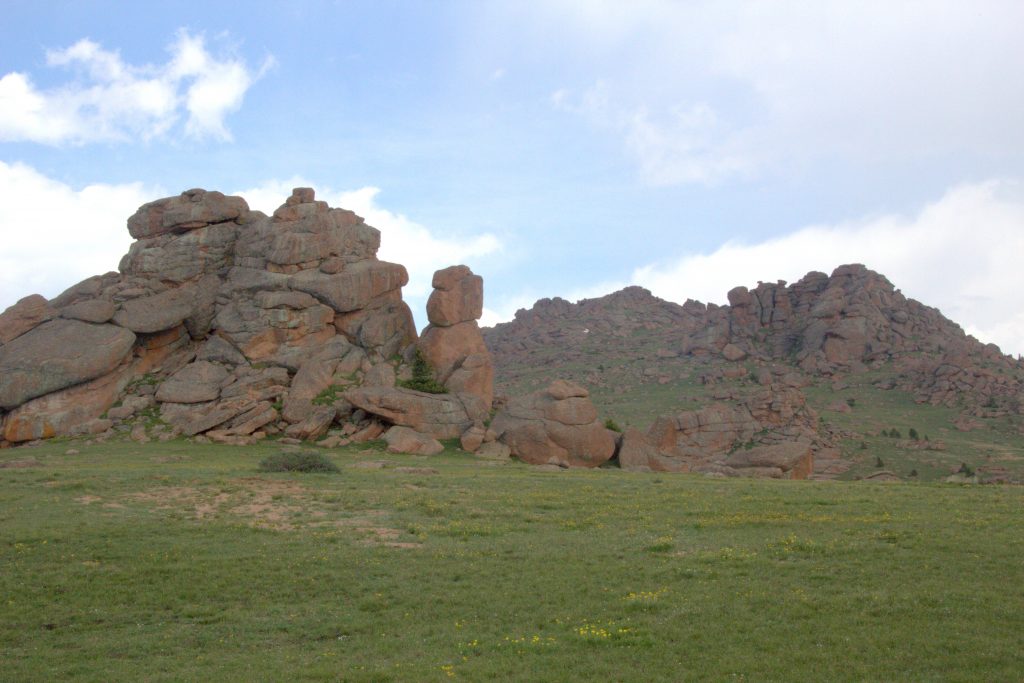 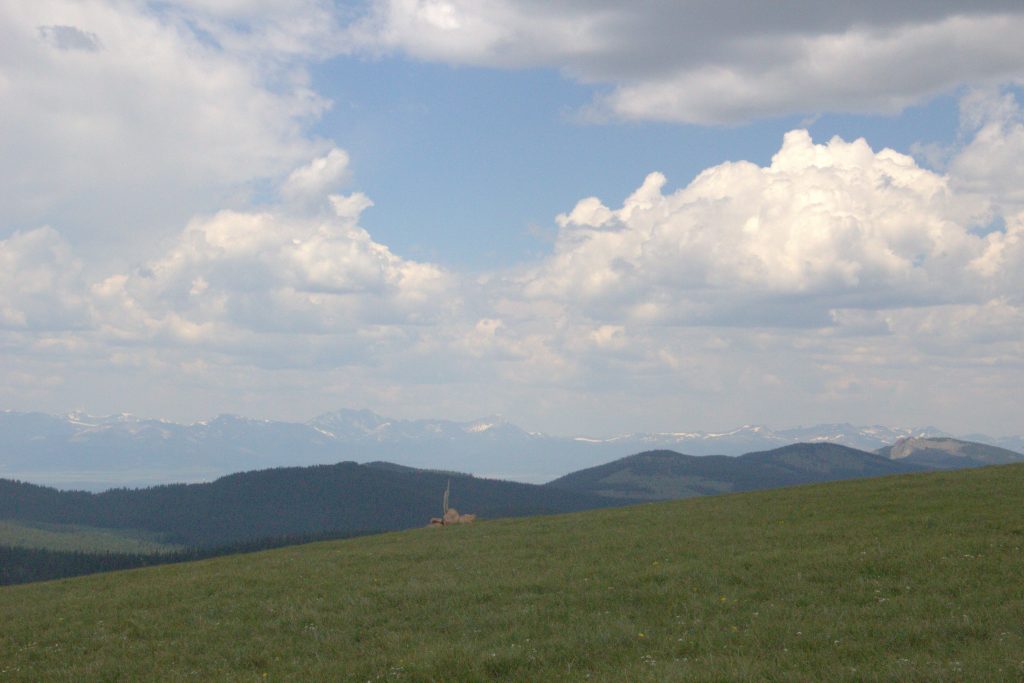 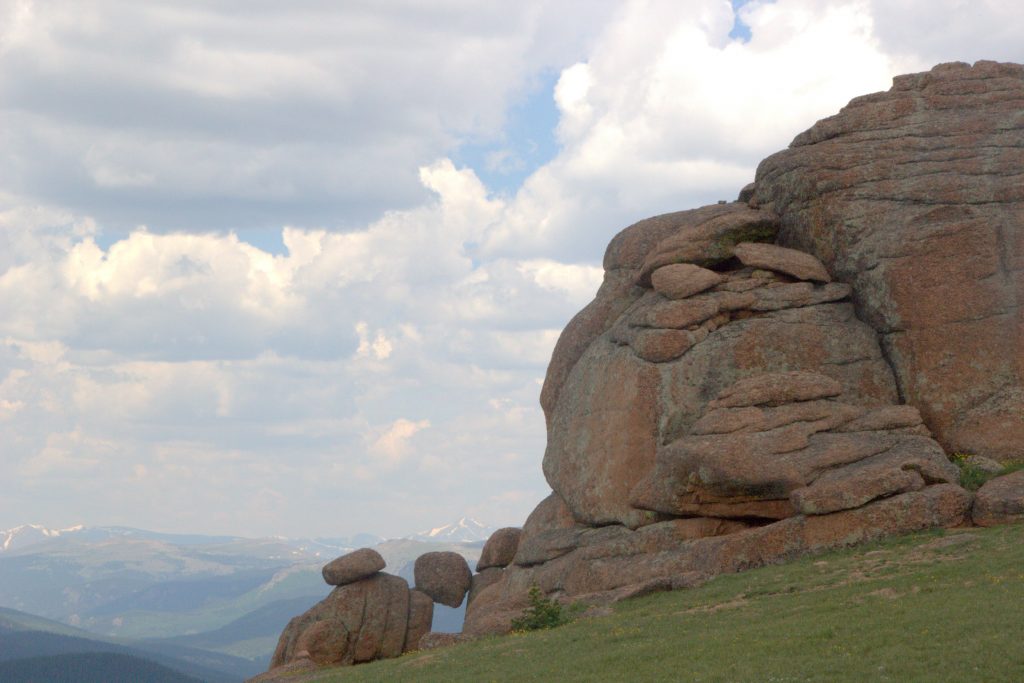 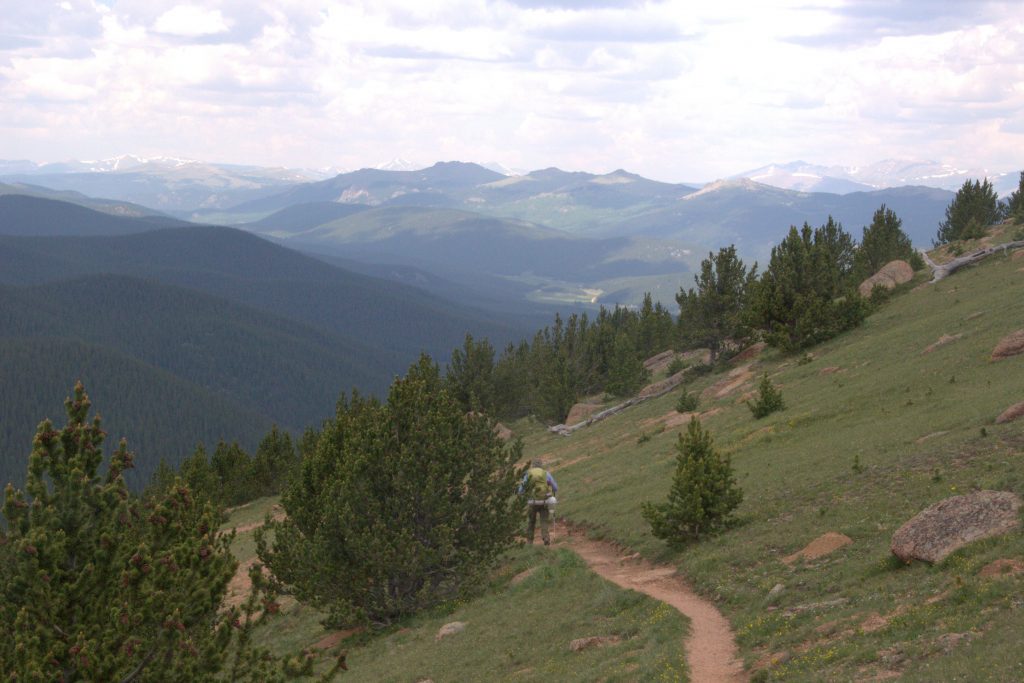