The day after I hiked the Tongariro Crossing, I took a driving tour to the coast west of Tongariro National Park. It was cloudy and misty when I left National Park Village, driving north to Taumarunui and then west on the Forgotten World Highway.  This scenic route was a little driven, narrow road which wound up and down and over sharp hills with many curves and varying types of pavement. It rained throughout this part of the drive and the going was slow, and it took me three hours to drive just over ninety miles. I drove through the town of Stratford and stopped for a while in New Plymouth, a small but active beach city.  Driving between Stratford and New Plymouth, I could see the bottom of the volcano, Mount Taranaki, but most of the mountain was hidden by clouds.  From there, I drove north up the coast and stopped at a beach area called Tongaporutu to see an attraction called the Three Sisters.  It was just past high tide.  So I knew I could not walk on the beach, and I instead walked up a dirt road called the White Cliff Walkway to take pictures of the ocean and the rock formations along the beach.  There were sheep all along the trail, and at one point, I had to get off the dirt road as a farmer in a beat-up SUV drove cattle up the trail.  Following a description in a guide book, I went through a gate and crossed a pasture, used a walkover to climb a fence and stood on top of a seaside cliff where there was a monument to a number of people.  From there, I took pictures of waves breaking on the Three Sisters and other rock formations along the shore.  By that time, the tide was receding so I went back to the beach trailhead and walked over rocks and through knee deep water to the beach.  The beach was spectacular with several stone towers and large island-like formations with caves eroded through their bases.  When I got to the beach, the wind was blowing strongly and it started to rain a little.  I walked past a large seal who was working his way across the beach to the water. 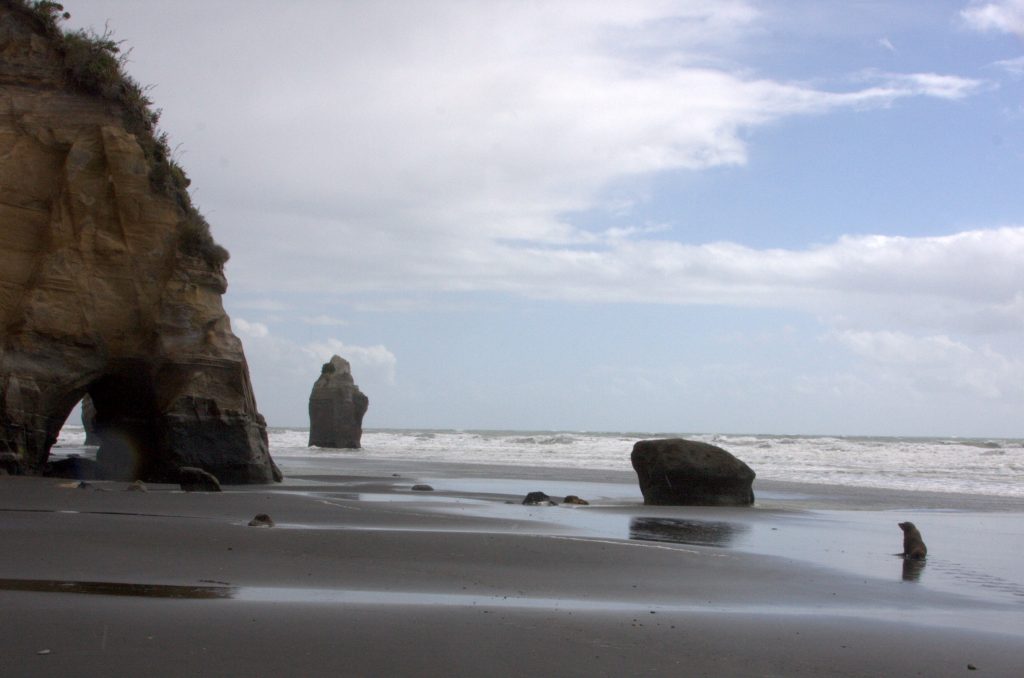 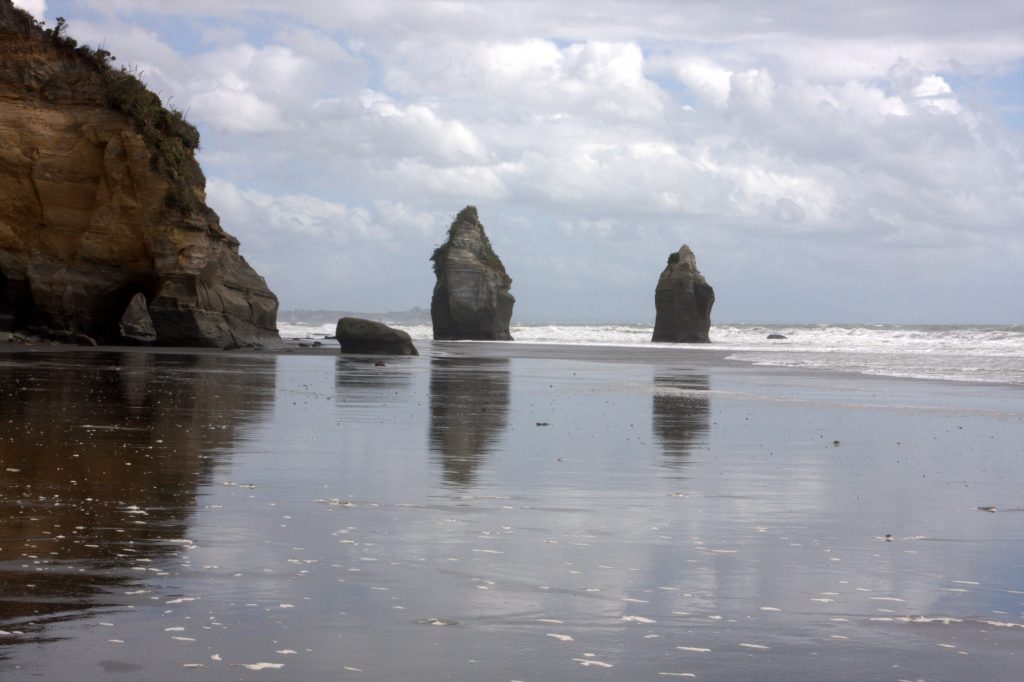 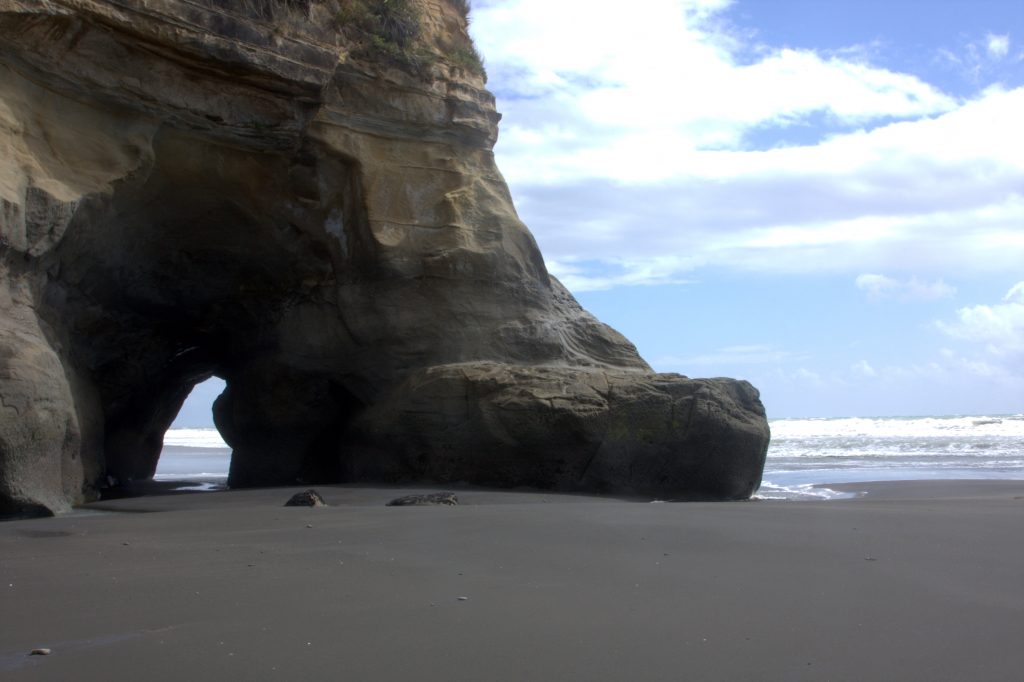 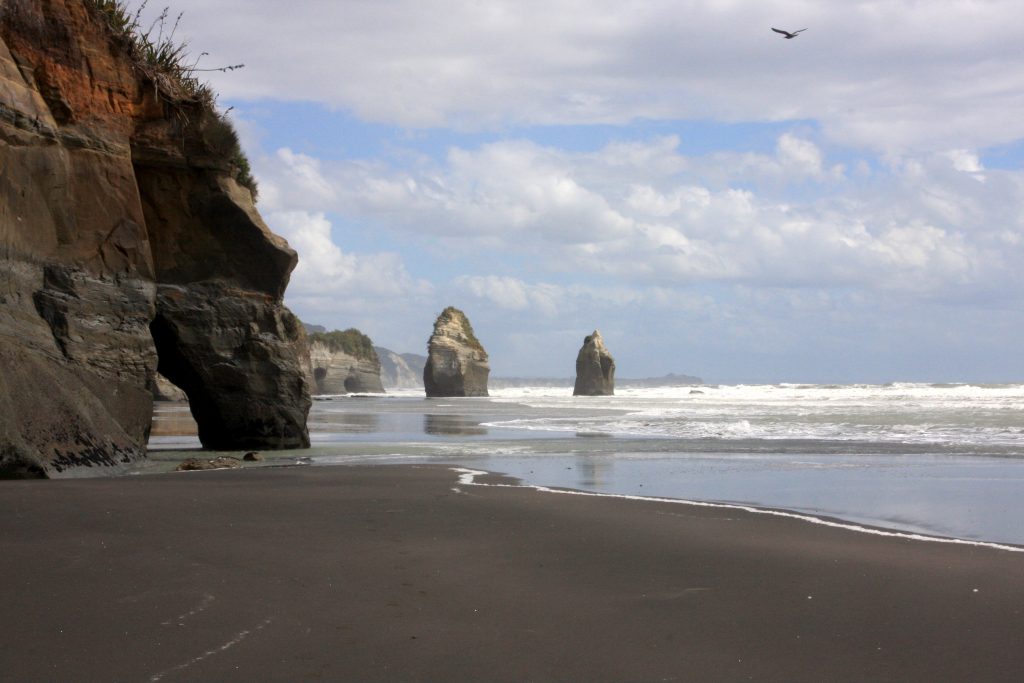