From Rotorua, I drove north into the Auckland suburbs.  Piha is in the Waitakere Range, the coastal mountain range on the west side of the metropolitan area. I struggled to find my way through the suburbs, so I stopped at a florist show where the owner gave me helpful directions.  I was soon driving through the forest on narrow, winding road, where the traffic was constant and fast on these perilous roads. I finally found the turn to Piha and drove over the top of the range and steeply down towards the coast and into the village.  I saw a sign for Lyons Bed and Breakfast where I was staying, which hangs down the vertical edge of the range. From the road, you could not see the structure far below and to descend the driveway you had to turn on faith, apparently into the open abyss. The compound consisted of a series of five levels with a garage, cottage and main house.  The nice owners showed me to my room which had enormous windows and a door to the deck with the most amazing view of the rugged beach far below and of Lyons Rock at the middle of the beach.  Because the other guests were leaving, I had my own luxury bathrooms, which was quite a change from the hostels where I had been staying.  The owners told me there was basically one restaurant open in the village, the More Pork Kitchen, which also served at the local headquarters of the RSA, the New Zealand Veterans association.  I had fish and chips, a common New Zealand fare, and at sunset, all stood while the bartender recited the RSA pledge.  After dinner, I watched the final minutes of sunset from Piha beach.  The following are views from the door to the deck in my bedroom in the evening and the morning. 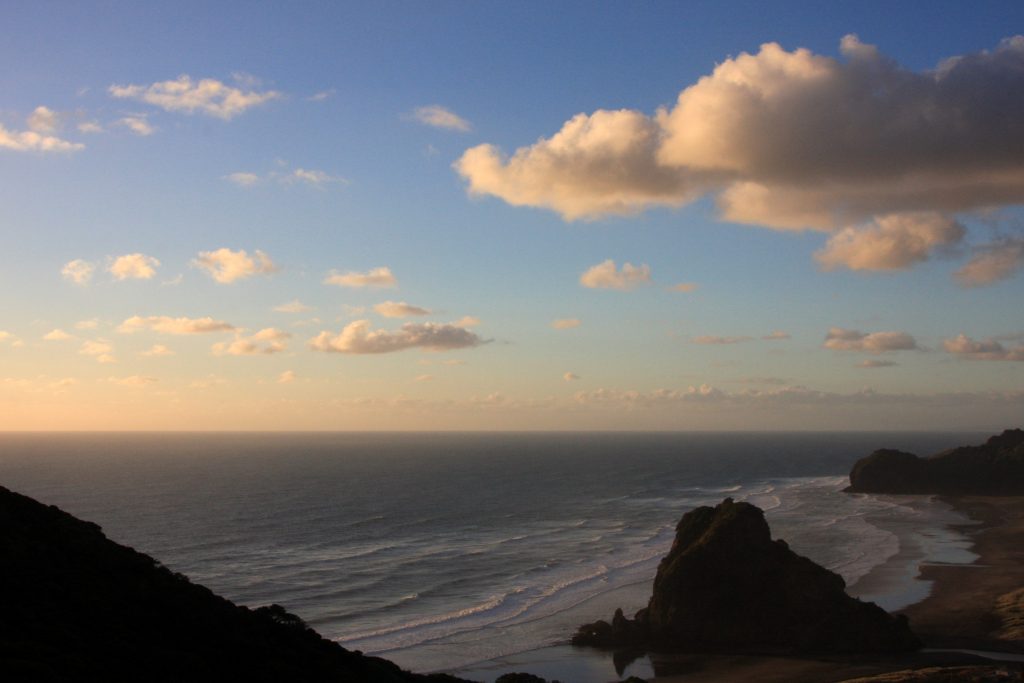 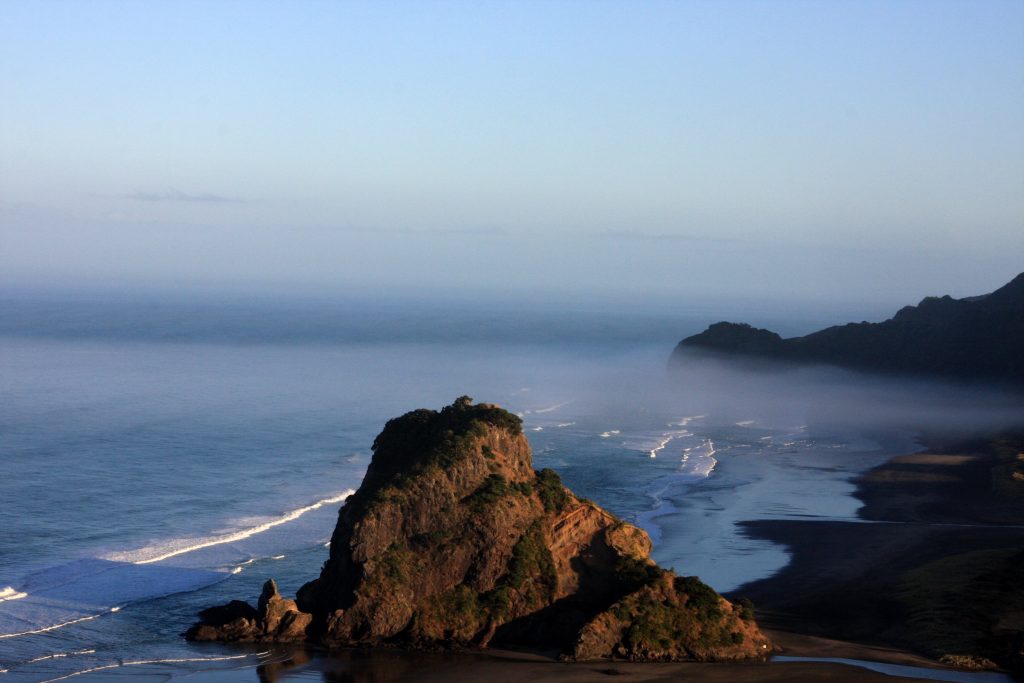 The next day, at the suggestion of the owner, I hiked down from the highpoint in Piha on several trails arranged in a figure 8 loop, heading for Karekare Beach.  I had read that Karekare beach was one of the most beautiful beaches in New Zealand.  Around 11:00 AM, as I descended deep into the forest, it began to rain and continued for an hour.  After passing through the Village of Karekare, and stopping to see Karekare Falls, I began following a trail through the black sand dunes.  As was often the case as I hiked in the Waitakere, I was on a section of the Hillary Track, a new forty mile trail following the length of the range.  After a bit of walking, I turned out onto the black sand Karekare and walked on the deserted beach in front of the wild surf for about an hour.  As I started to climb back to my starting point, the sky cleared to a brilliant blue sky, and it grew quite warm. Because of the figure 8 trail pattern, I was able to ascend on different trails than the ones I descended.  Climbing, the coastal views became more and more spectacular.  Near the top, there was a side trail out onto a rocky neck, high above the sea.  On the side trail, I was startled by a large, carved statue of a woman, and next to the carving was a sign telling the story of a young Maori woman whose lover drowned in the sea. The women died of heartbreak sitting on the point beyond the statue.  From that spectacular point, high above the ocean, there is one of the most spectacular views on the planet. 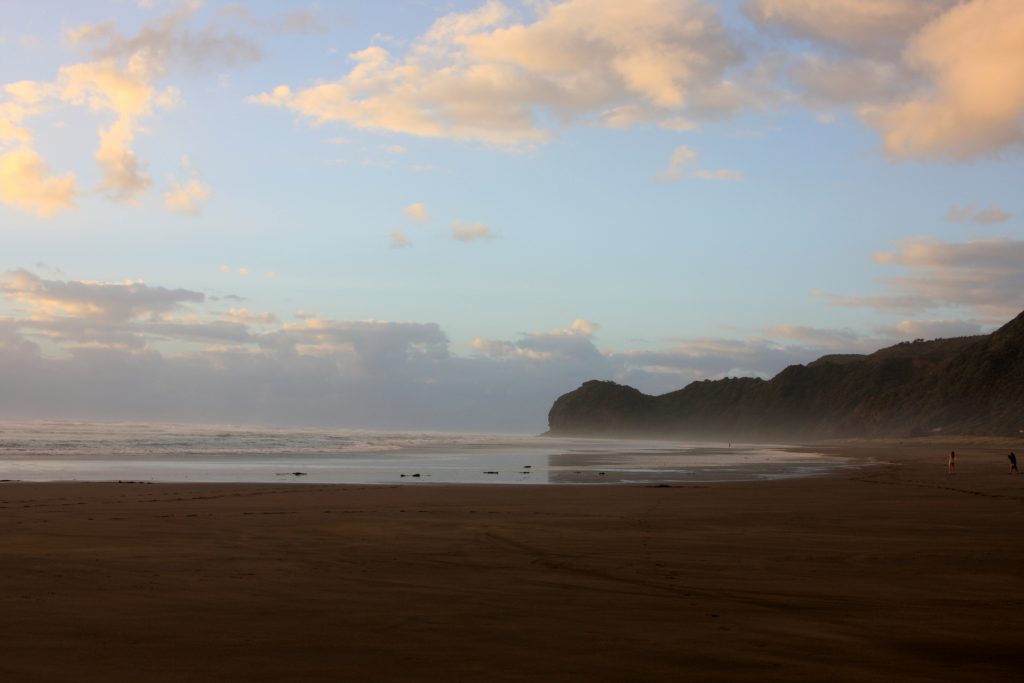 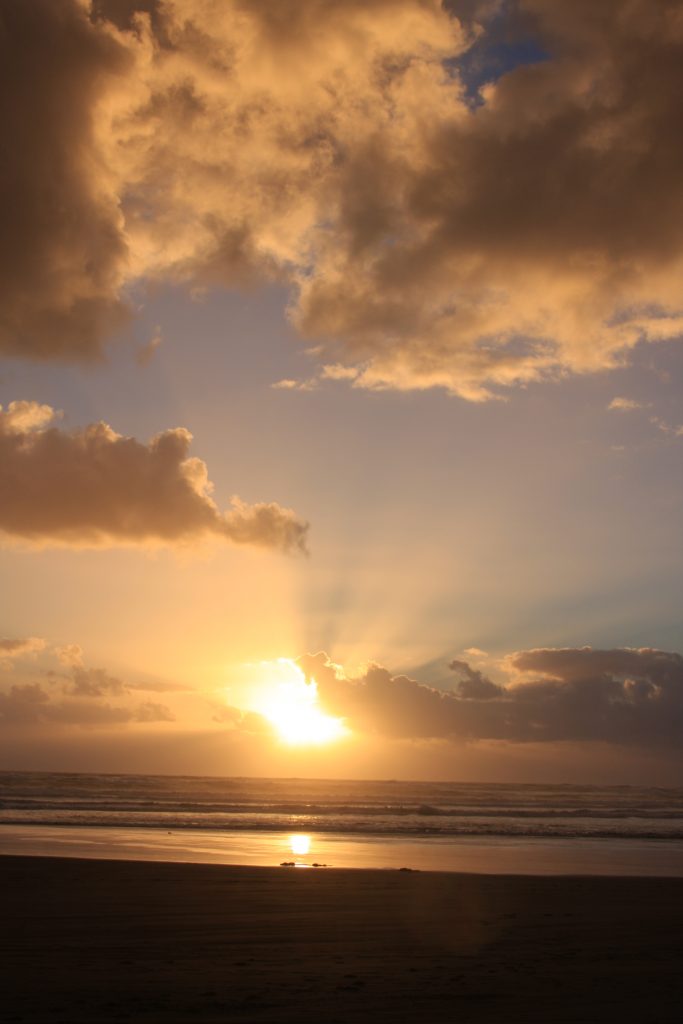 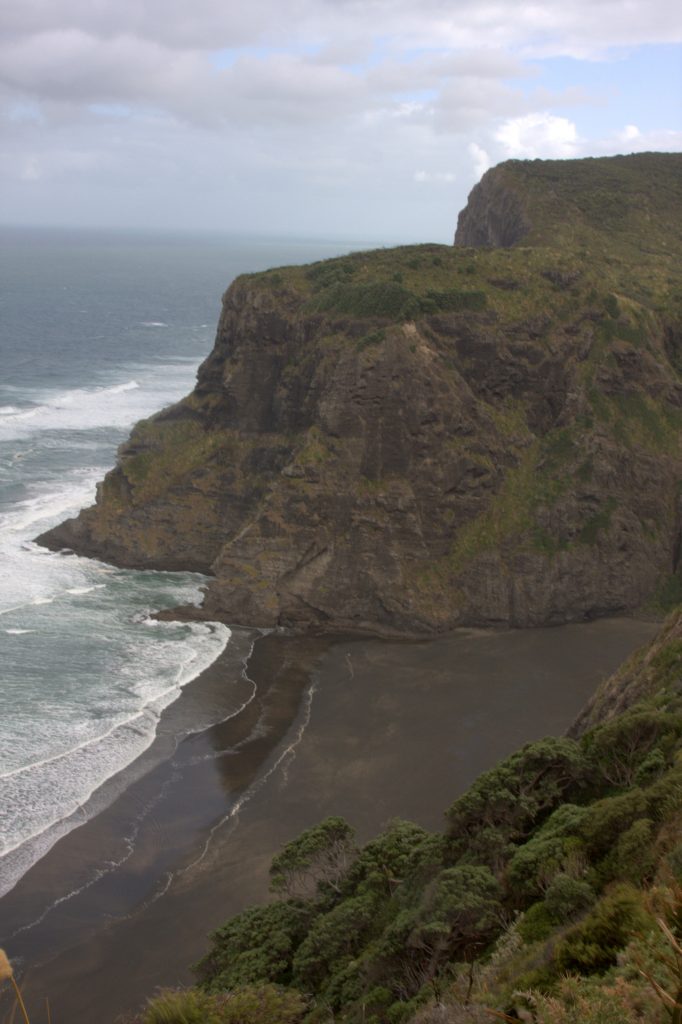 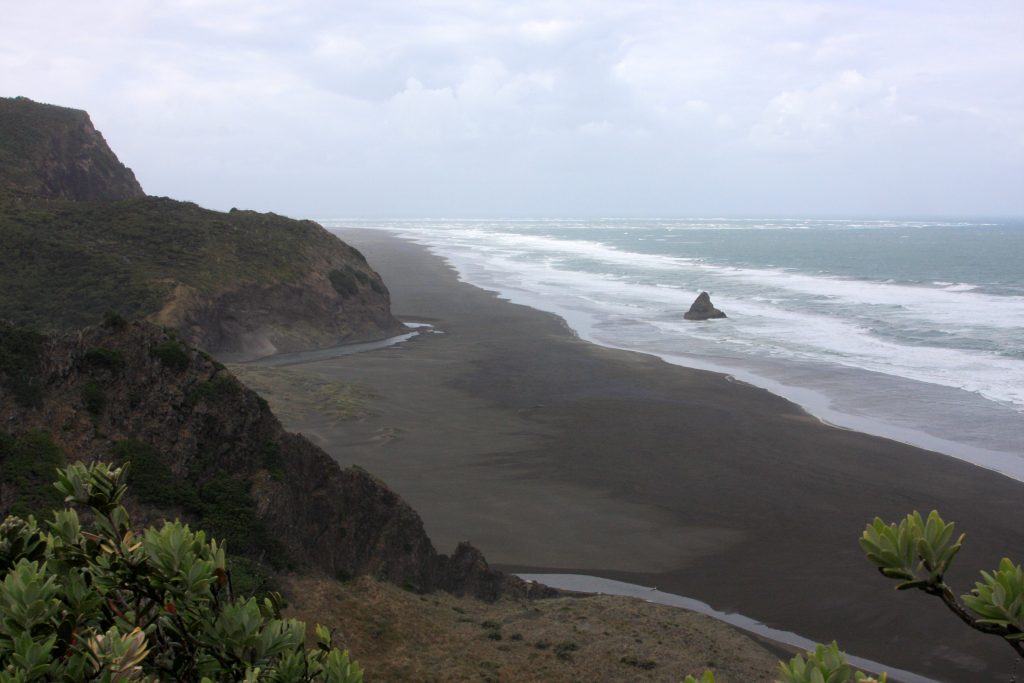 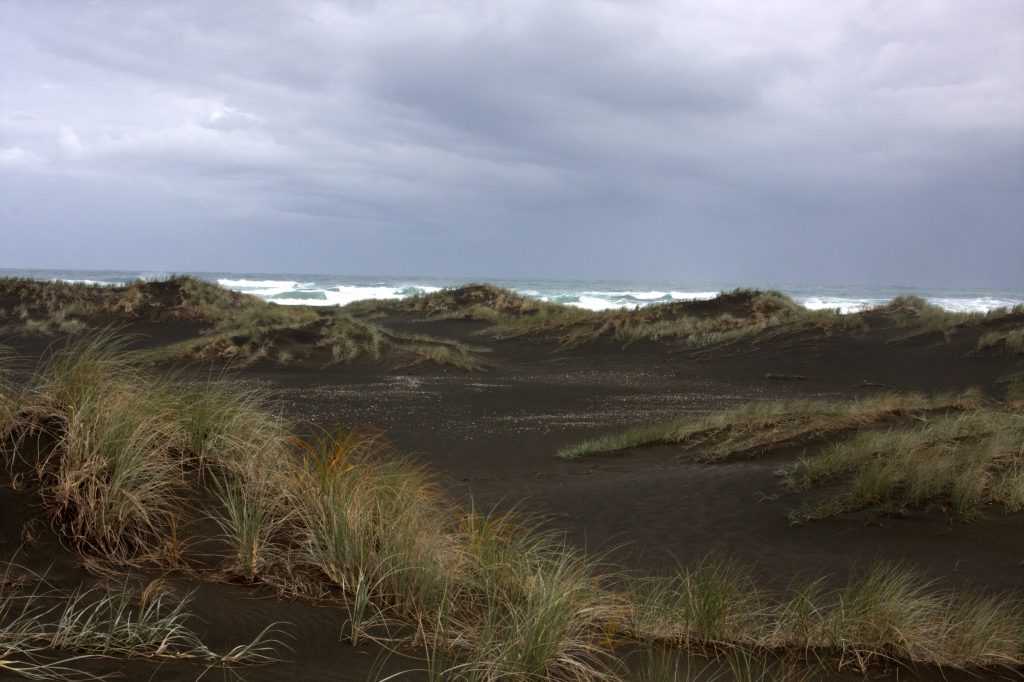 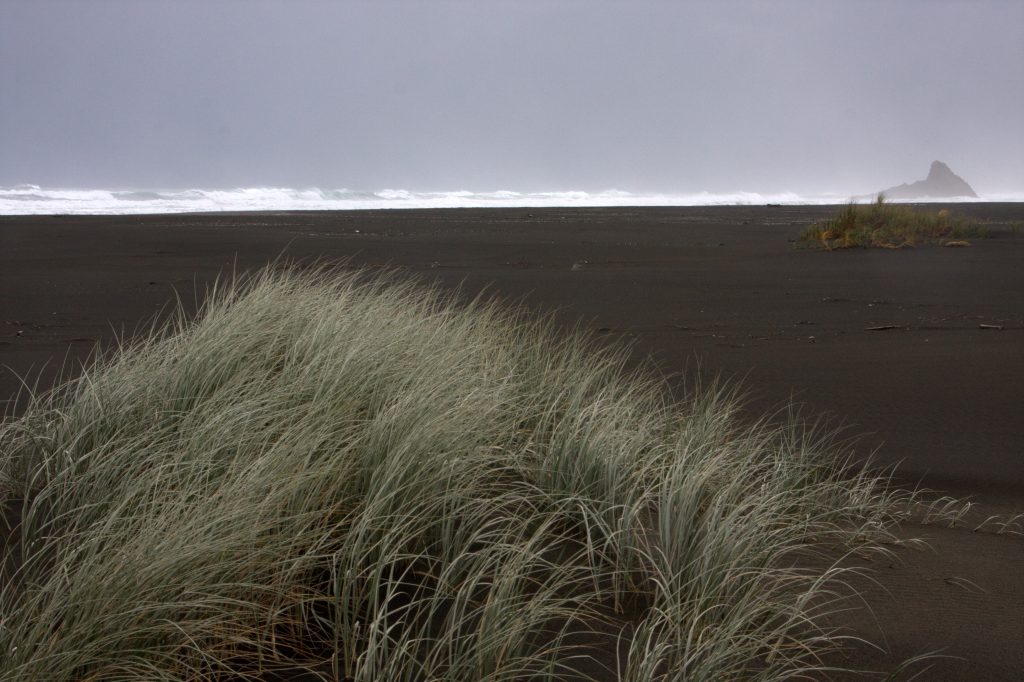 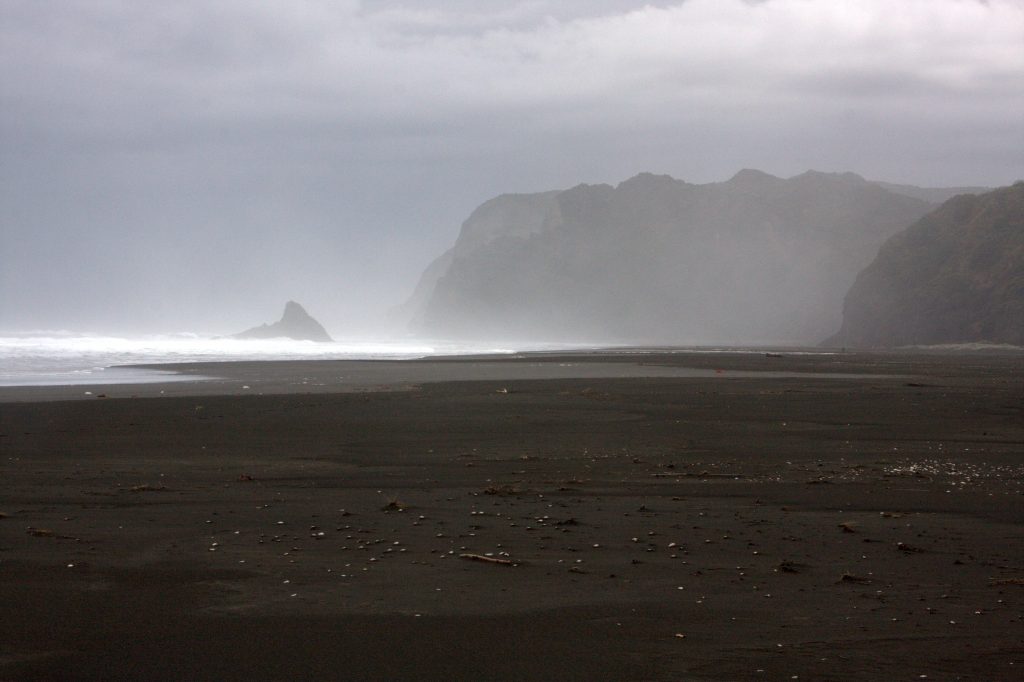 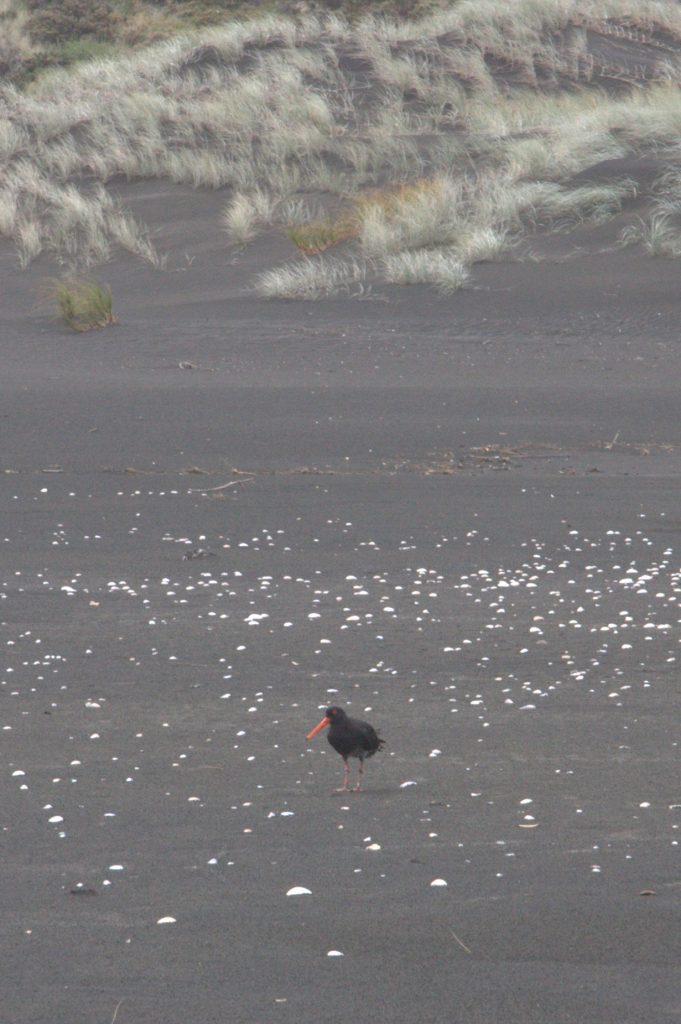 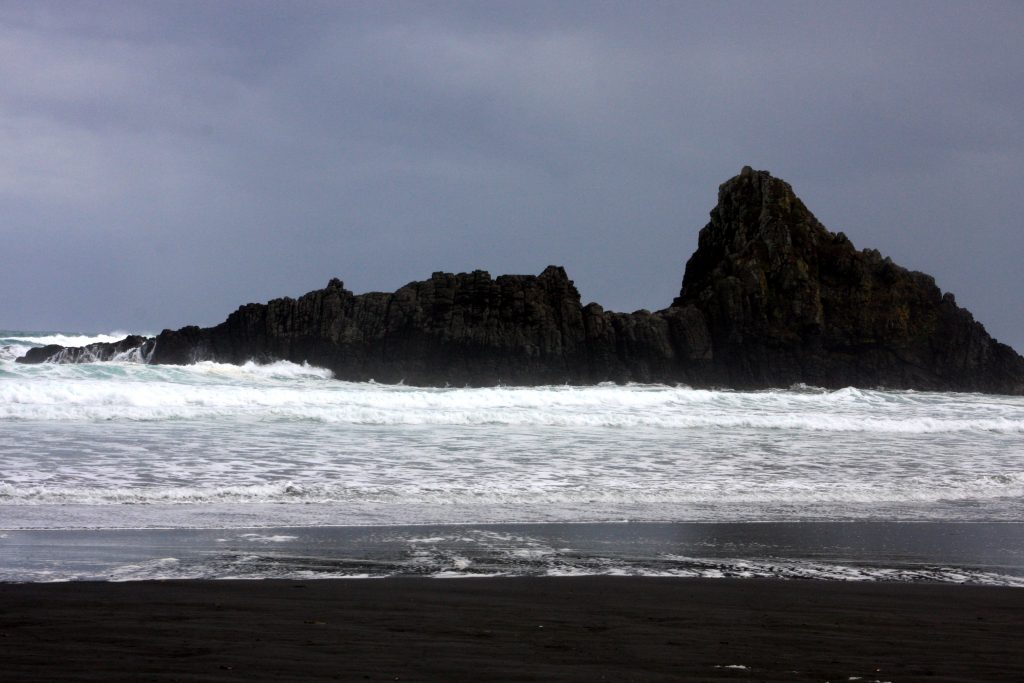 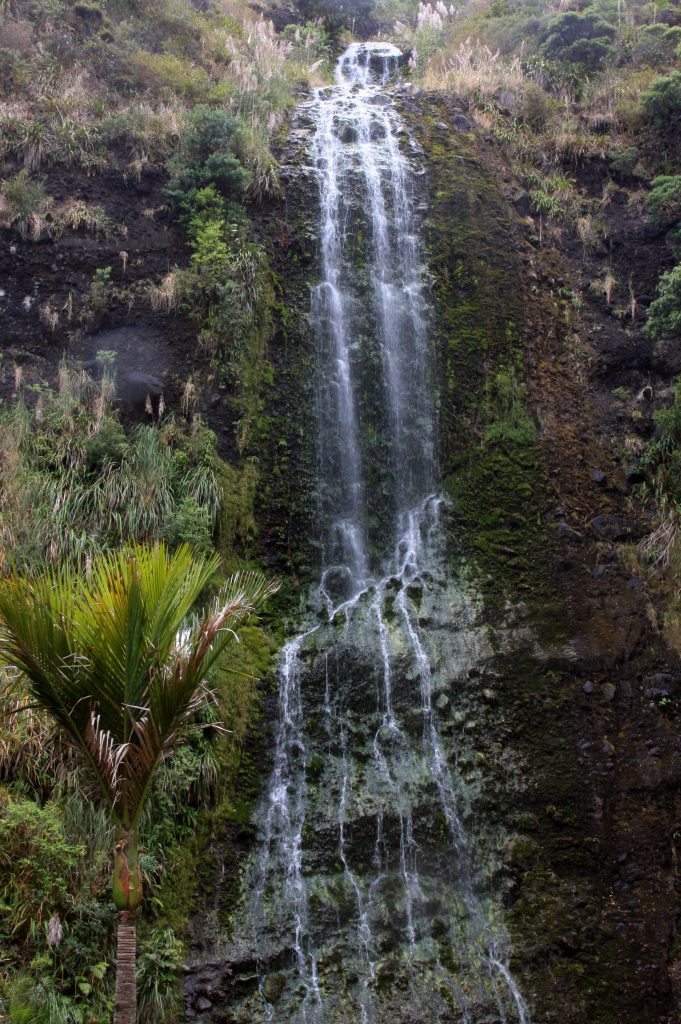 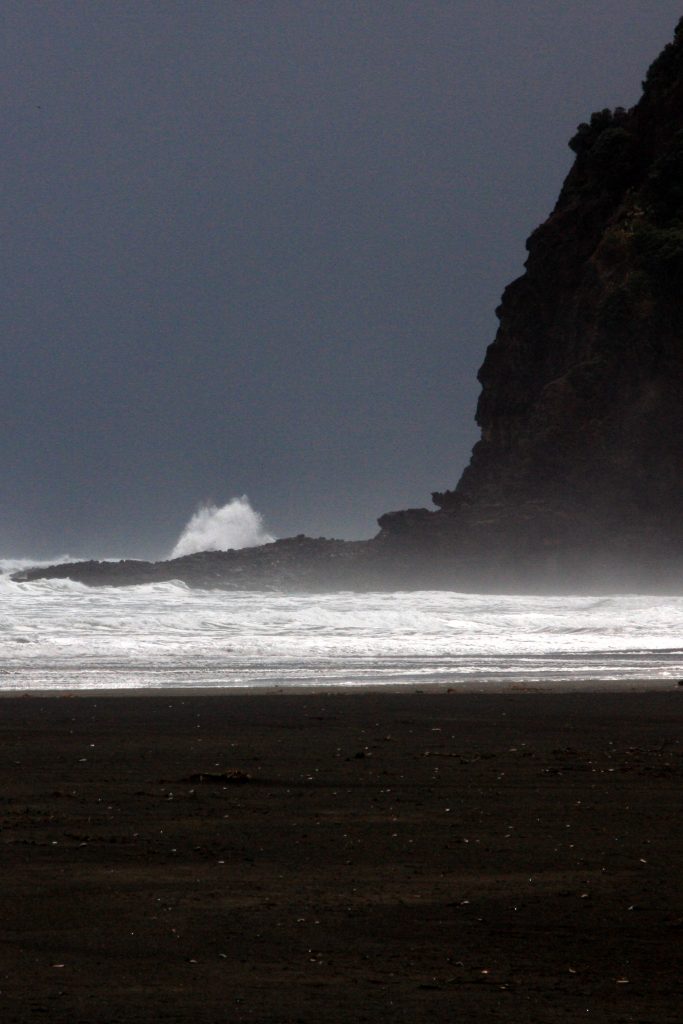 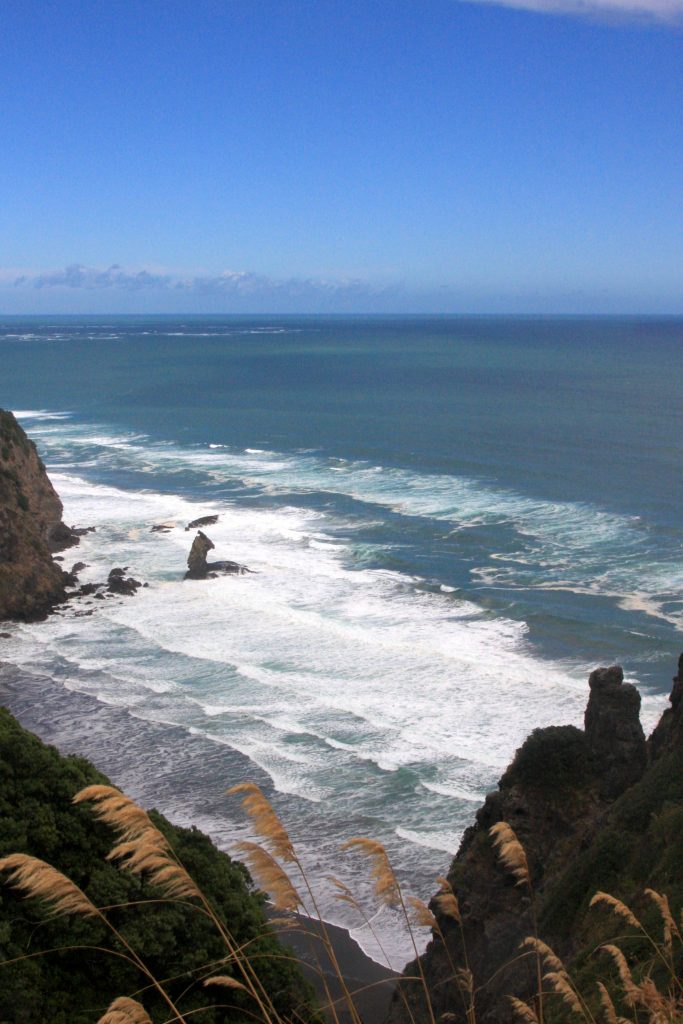 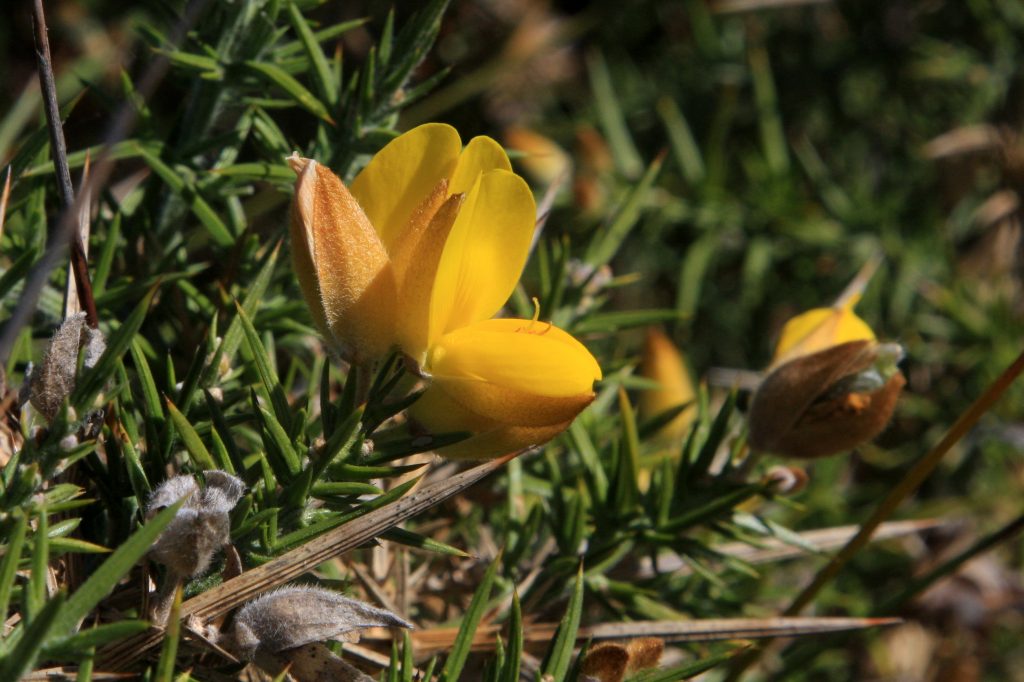 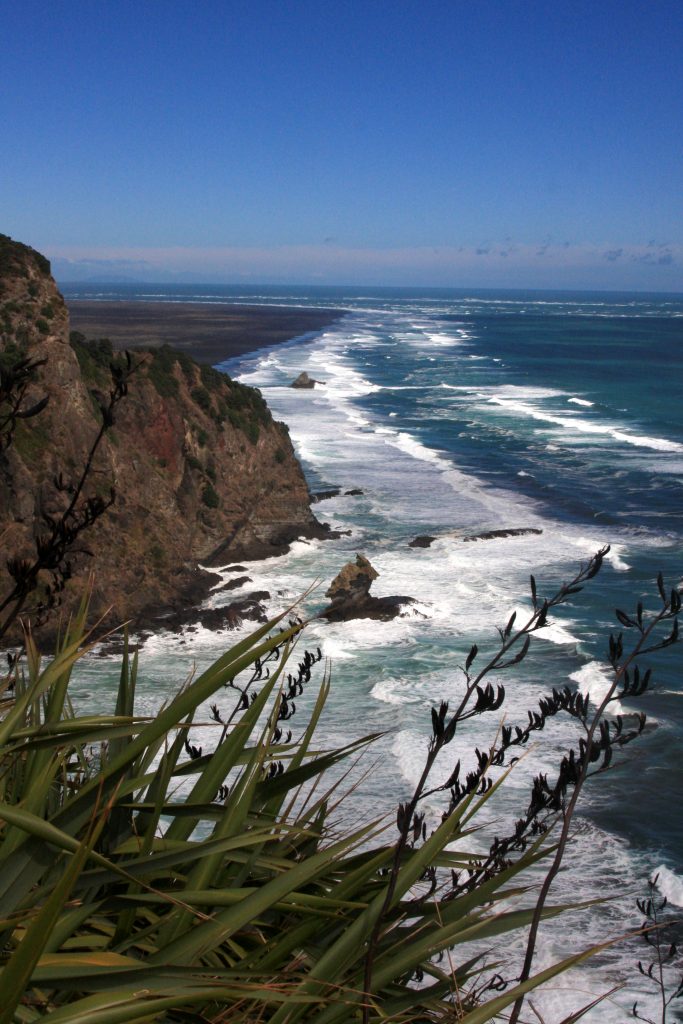 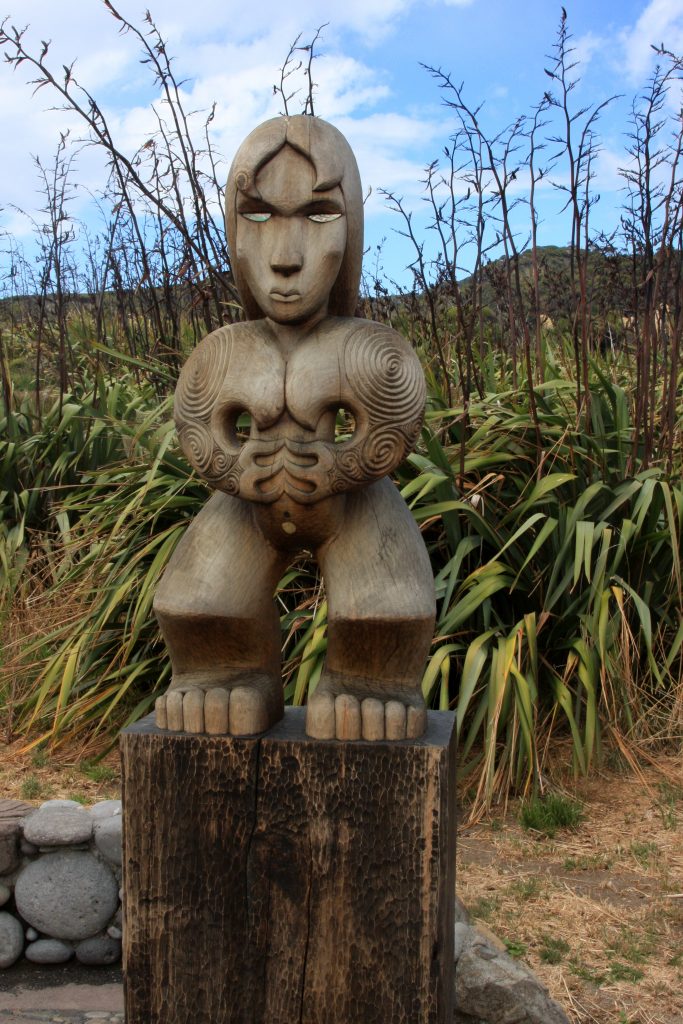 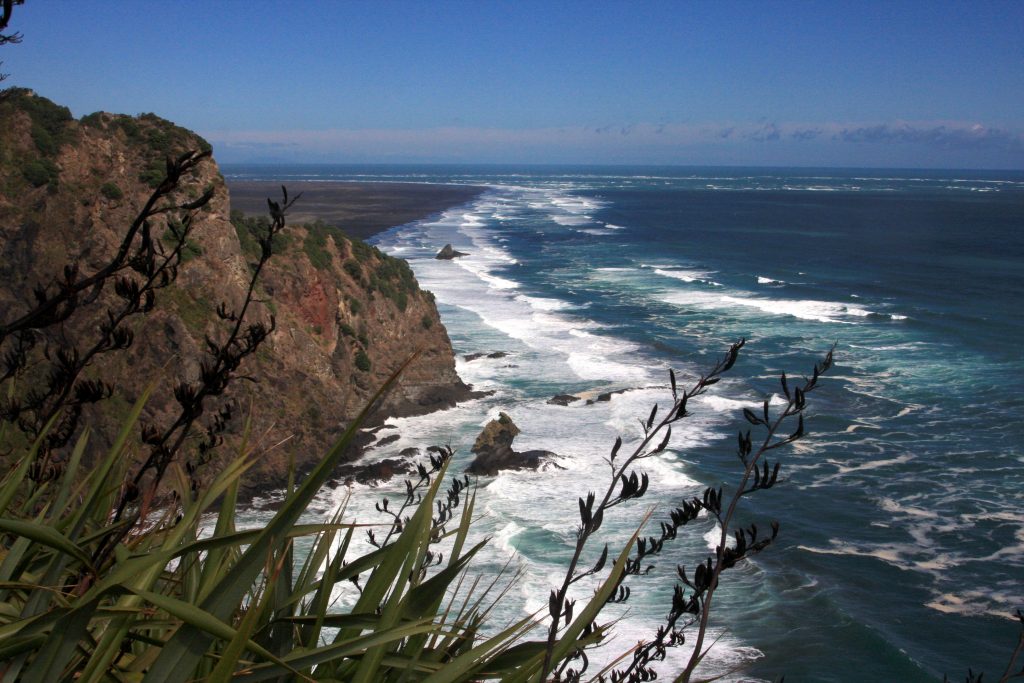 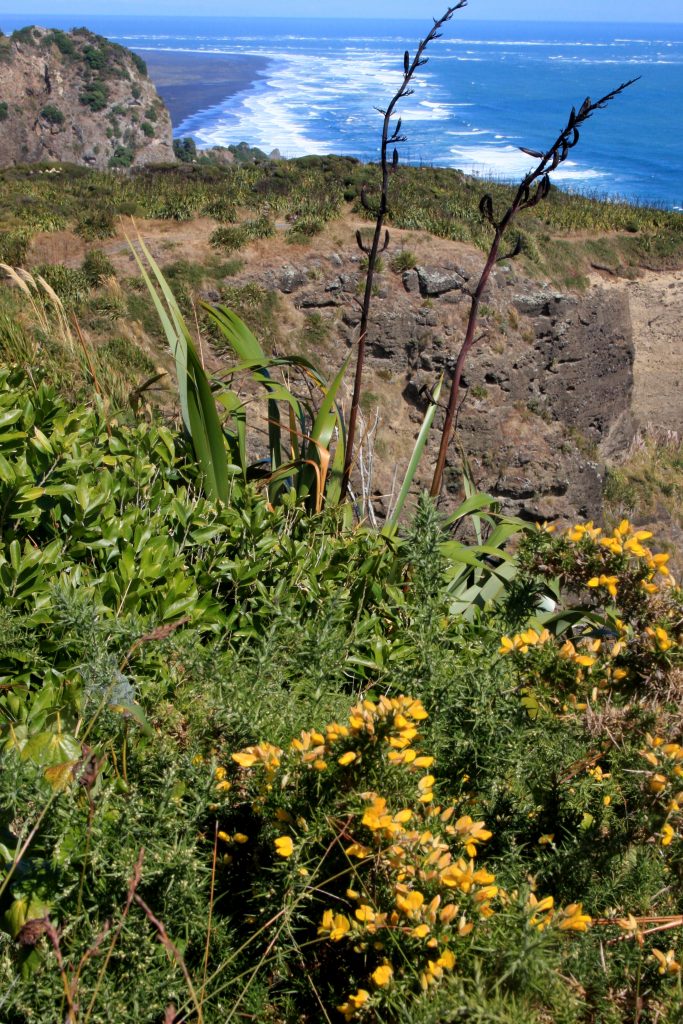 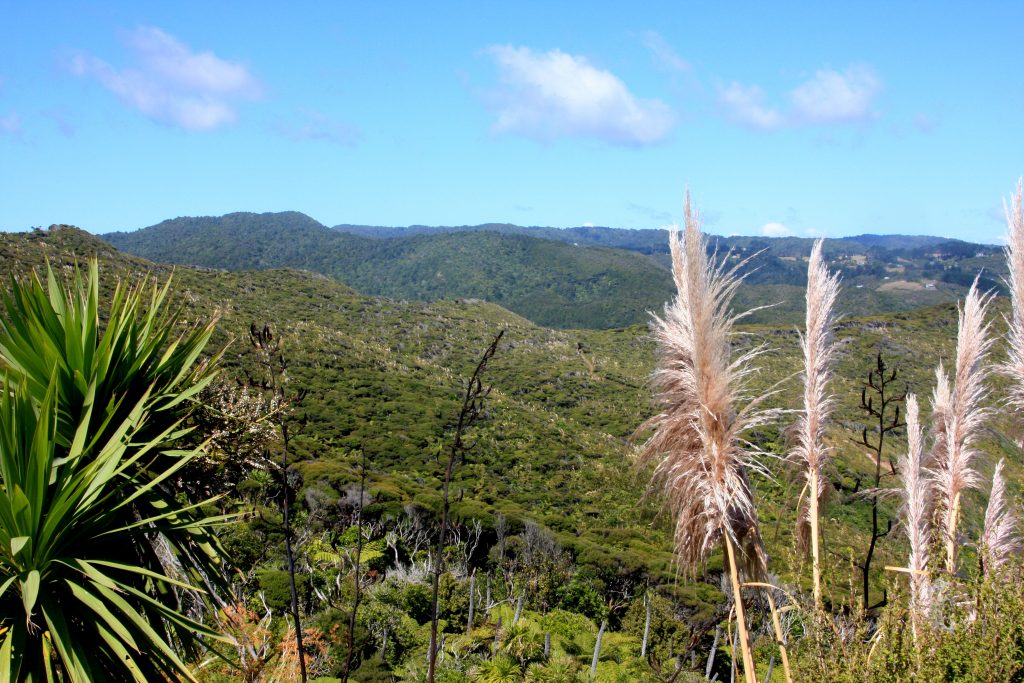 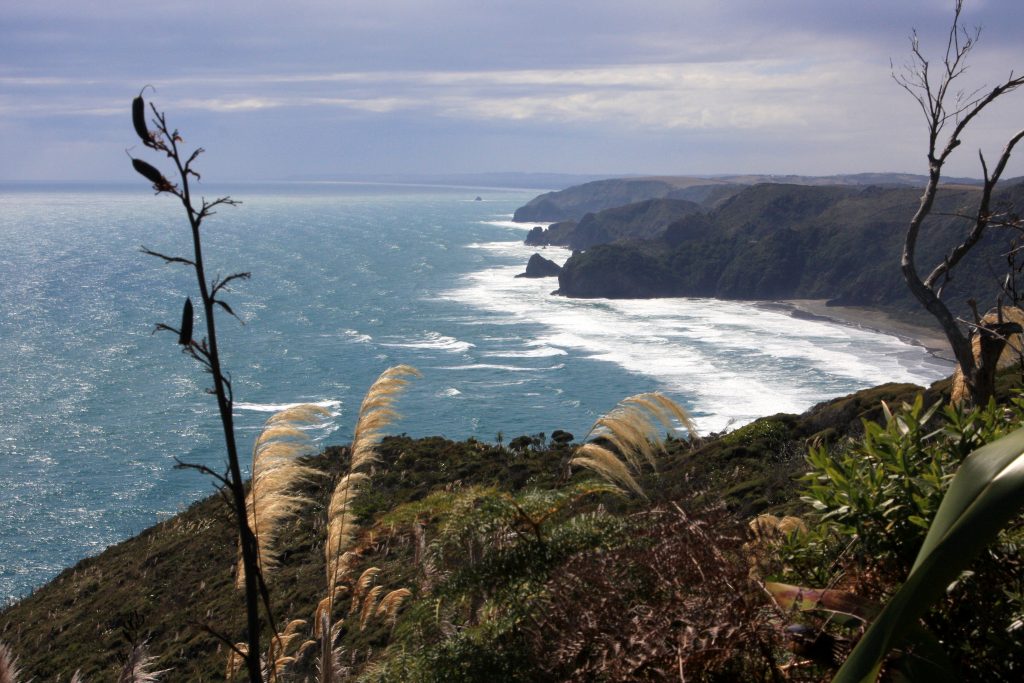