On the third day, from the Mintaro Hut we had to hike 8.7 miles to the Dumpling Hut.  First, we had to climb more than 1,600 feet to Mackinnon Pass, which was named after Quinton Mackinnon who discovered the Milford Track route.  As we climbed steeply, the vegetation changed from forest, to scrubby vegetation and finally to the alpine grasslands near the top.  At the top there was a monument to Mackinnon.  The broken clouds streamed over the pass and the surrounding peaks, creating an ever-changing landscape around us, and below us, the next valley was covered by a blanket of low clouds. When we climbed on to the high point on the pass, there were two Keas waiting for us.  We had been told that the Kea is the world’s only alpine parrot, with a reputation as a clown and for trouble making.  At the huts, we were told not to leave articles of clothing on the porches because the Keas would carry them away.  From the pass, after stopping at a shelter, we descended down through the grasslands and the interesting scrub vegetation, finding flowers in both areas.   When we got down to tree line, we found Mountain Ribbonwood trees in blossom.  As we descended steeply, it began to rain and was soon pouring. It rained all afternoon and into the night.  The trail followed the Roaring Burn - in New Zealand a stream is called burn. We descended the stream, down to the Arthur River.  It was so steep along the stream, that stairs with railings had been installed.  The trail became slippery and one of our group sprained her ankle on the steep descent.  She walked down to the Dumpling Hut but had to be transported from there by helicopter. After we arrived at the Quinton Lodge with its rest shelter, a few of us quickly hiked in the rain up a side trail to the tall and intensely-flowing Sutherland Falls.  As we continued down the Arthur River, we saw that the waterfalls were everywhere down the sides of the valleys, but it was hard to take pictures because it was raining so hard.  The New Zealanders called it a “proper rain.” When we got to the Dumpling Hut, we were soaked through. 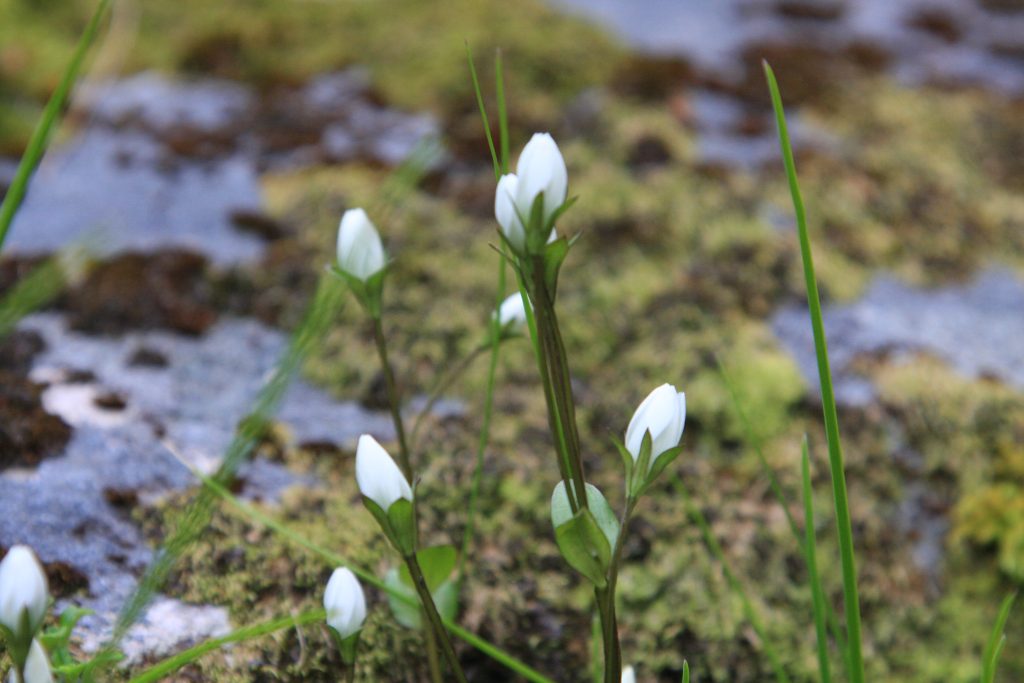 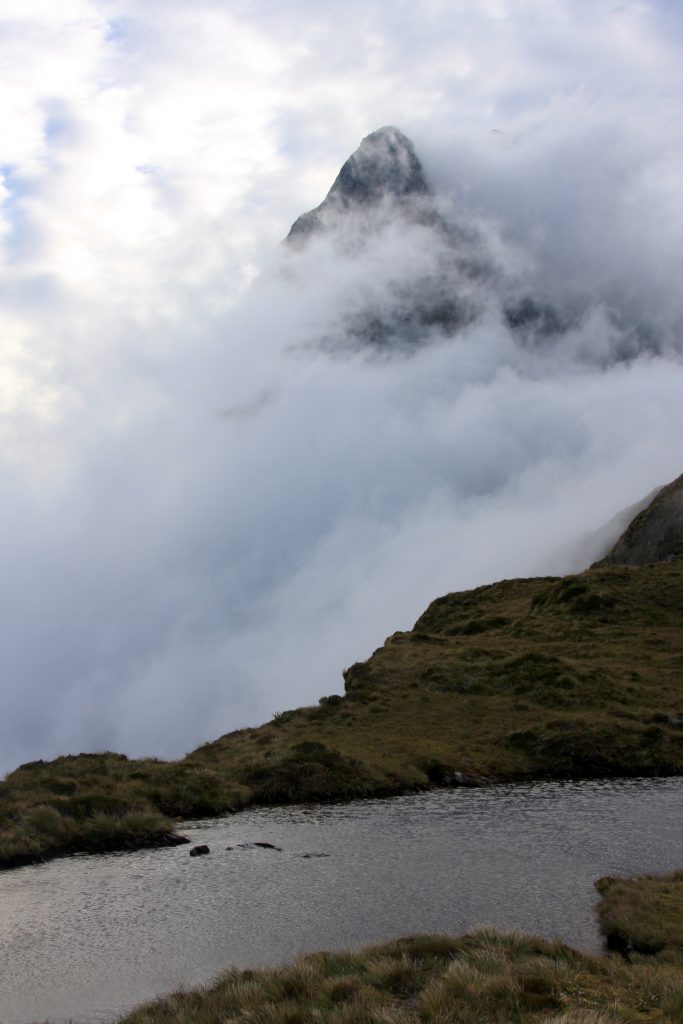 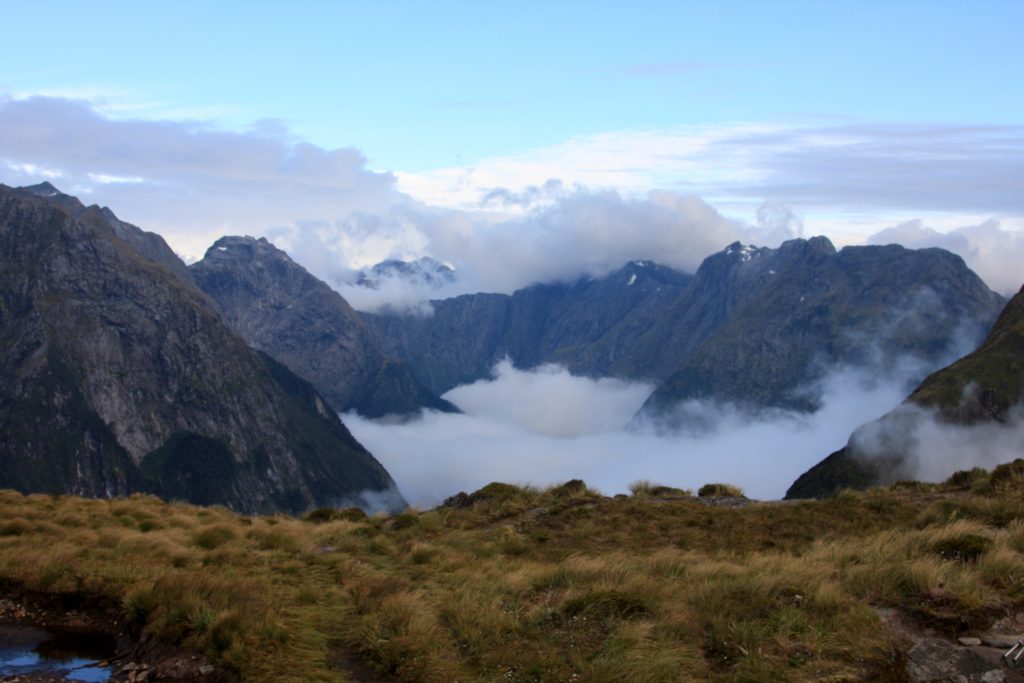 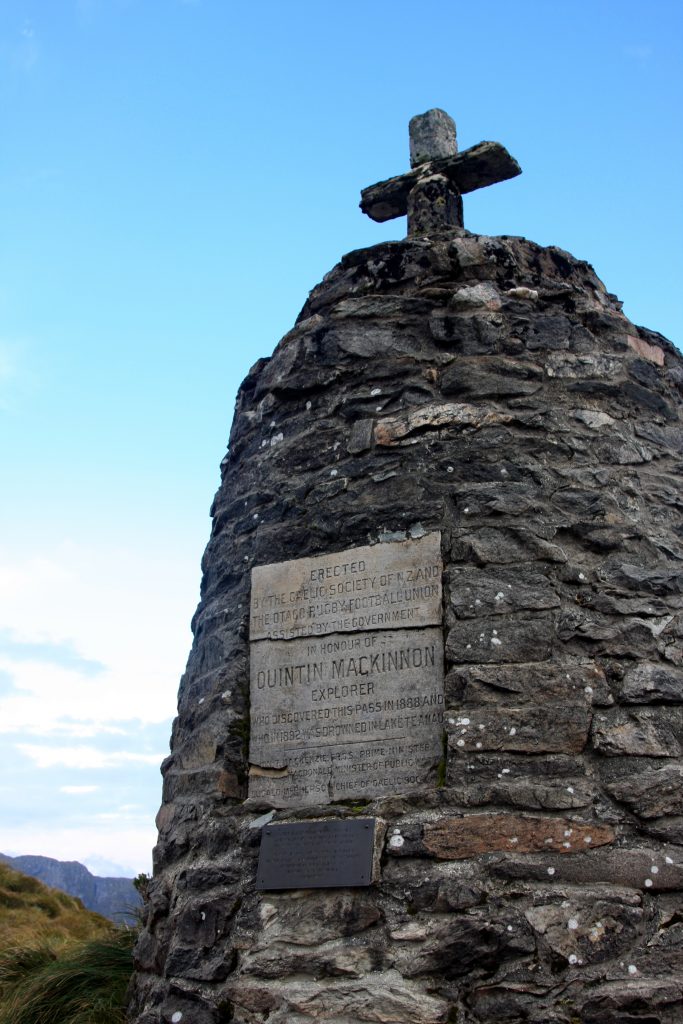 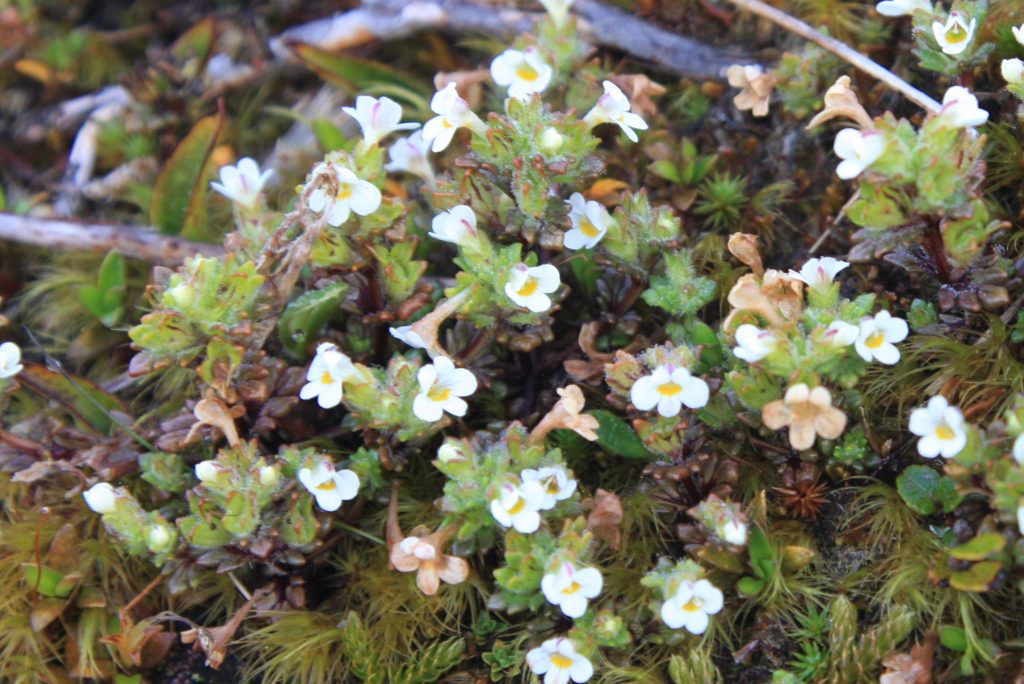 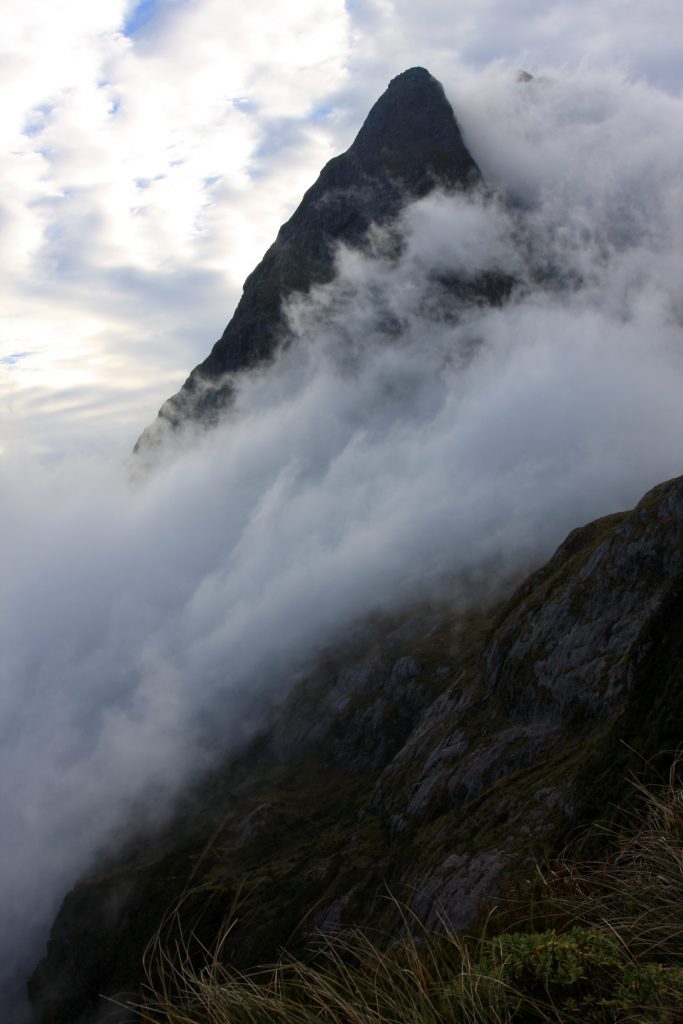 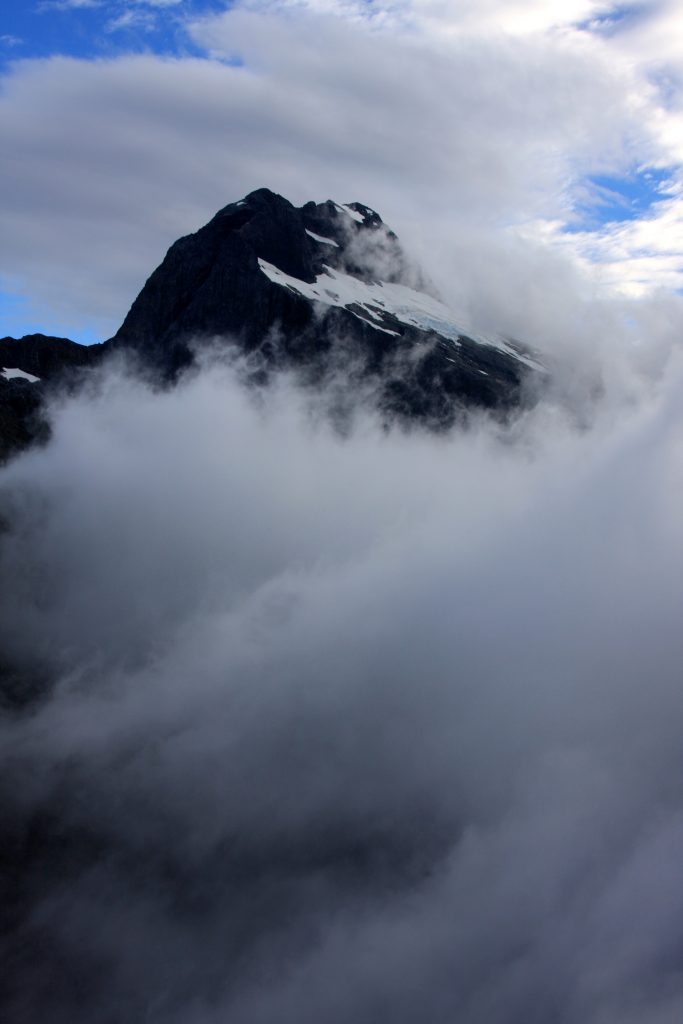 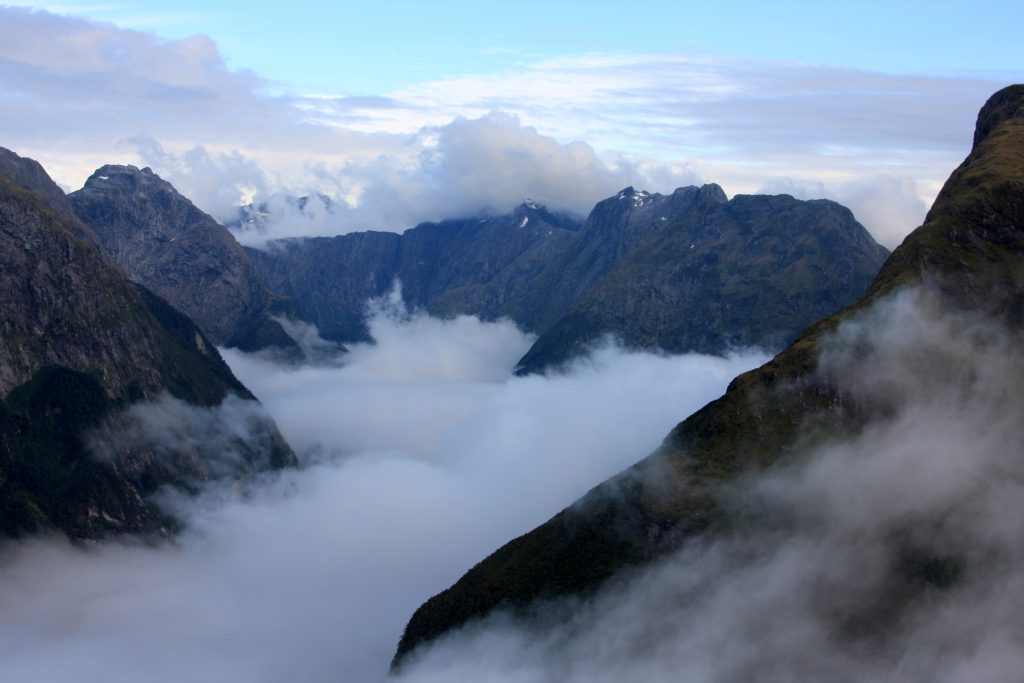 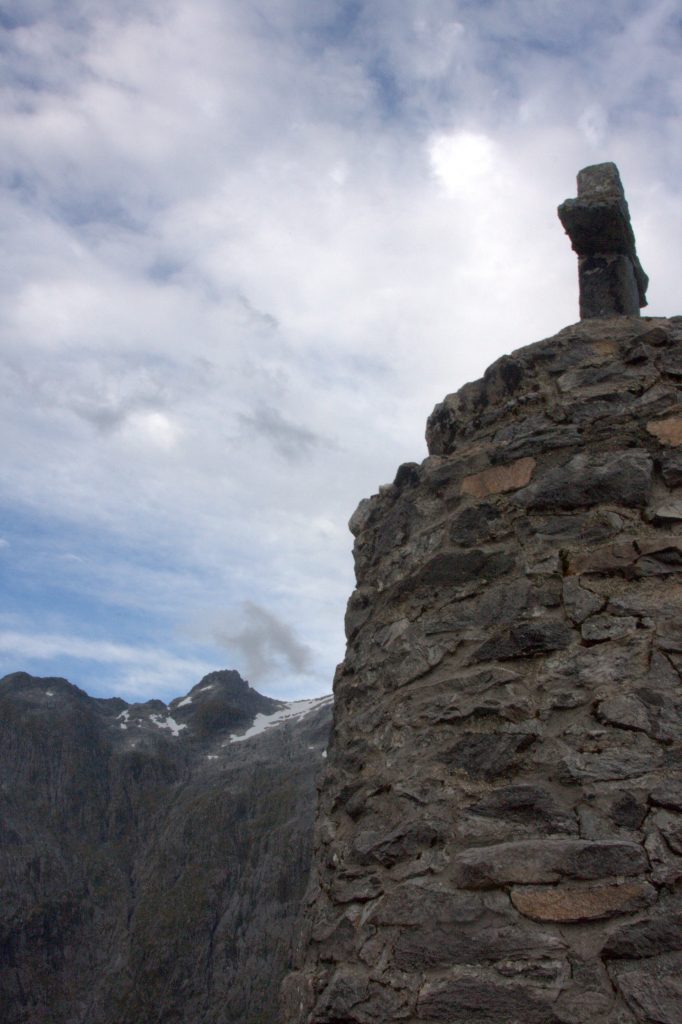 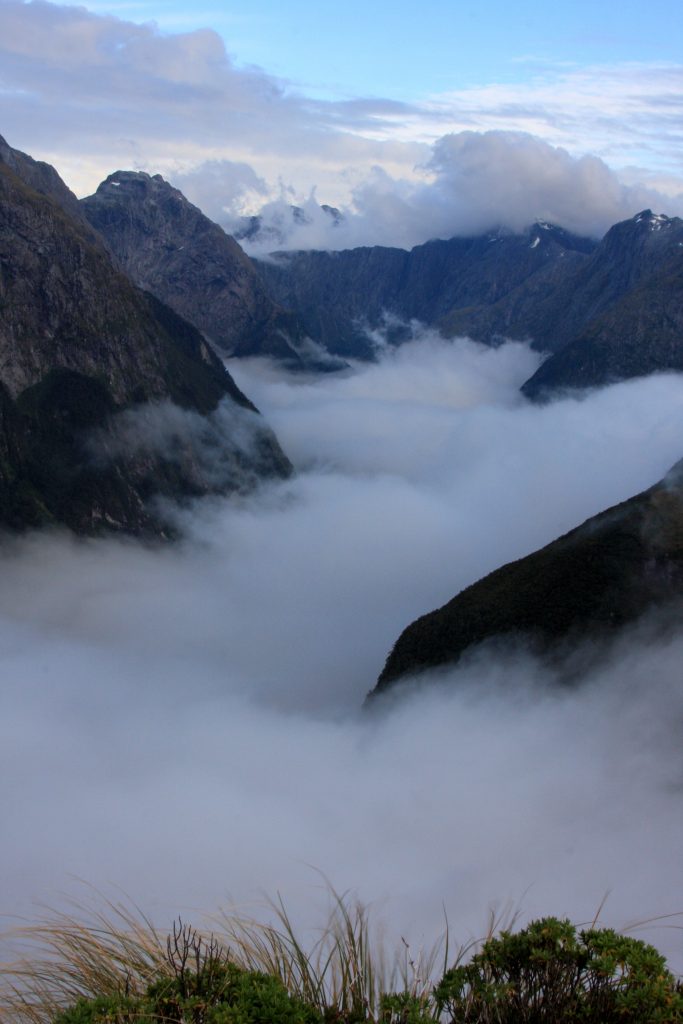 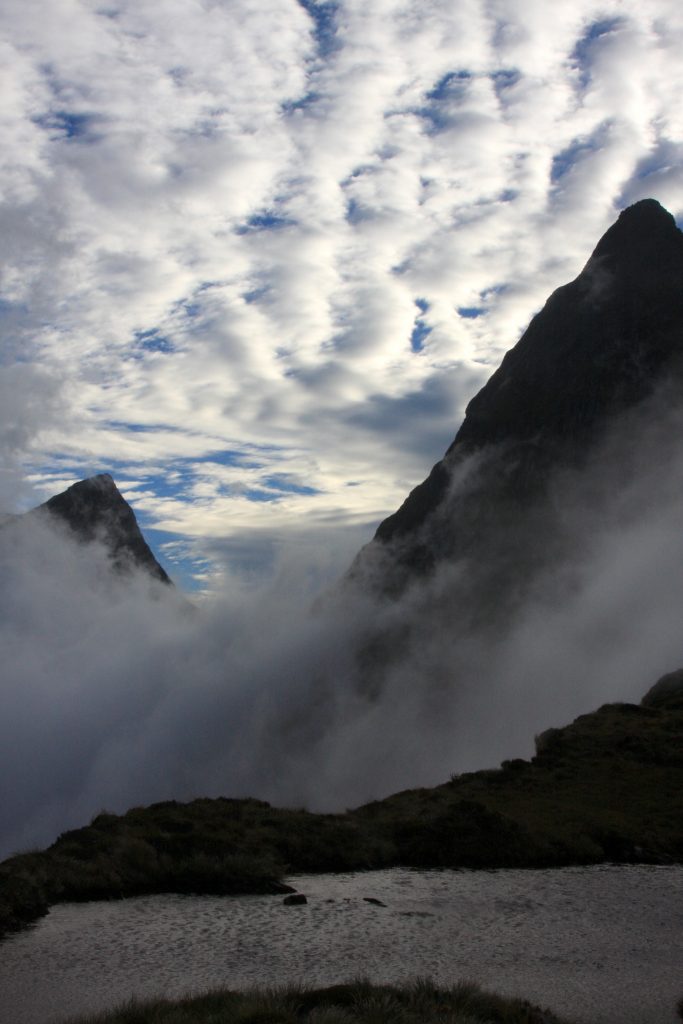 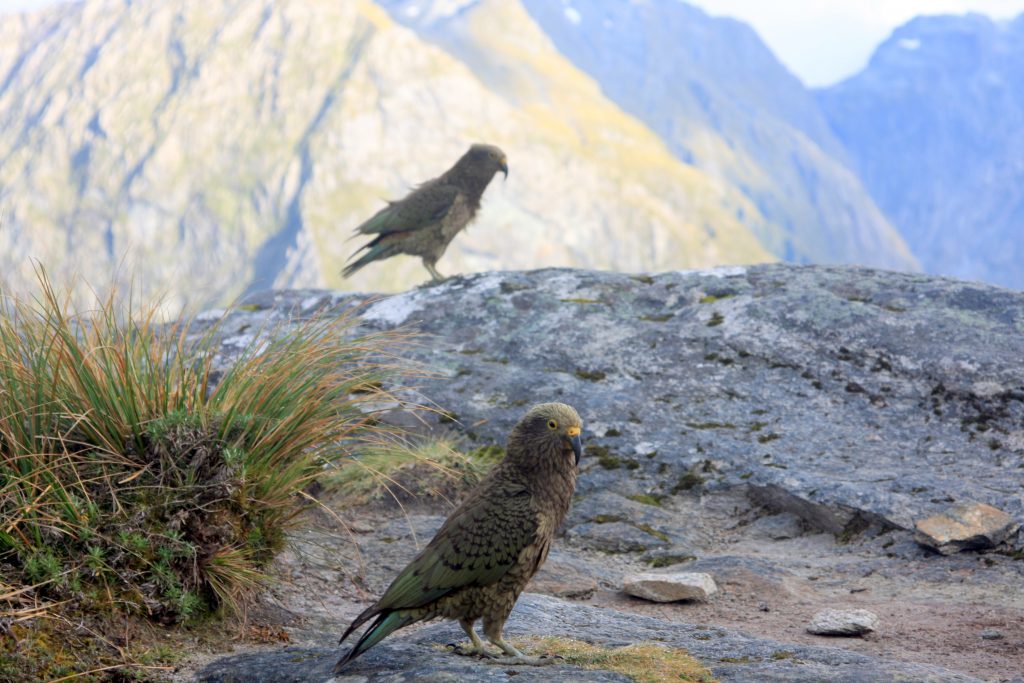 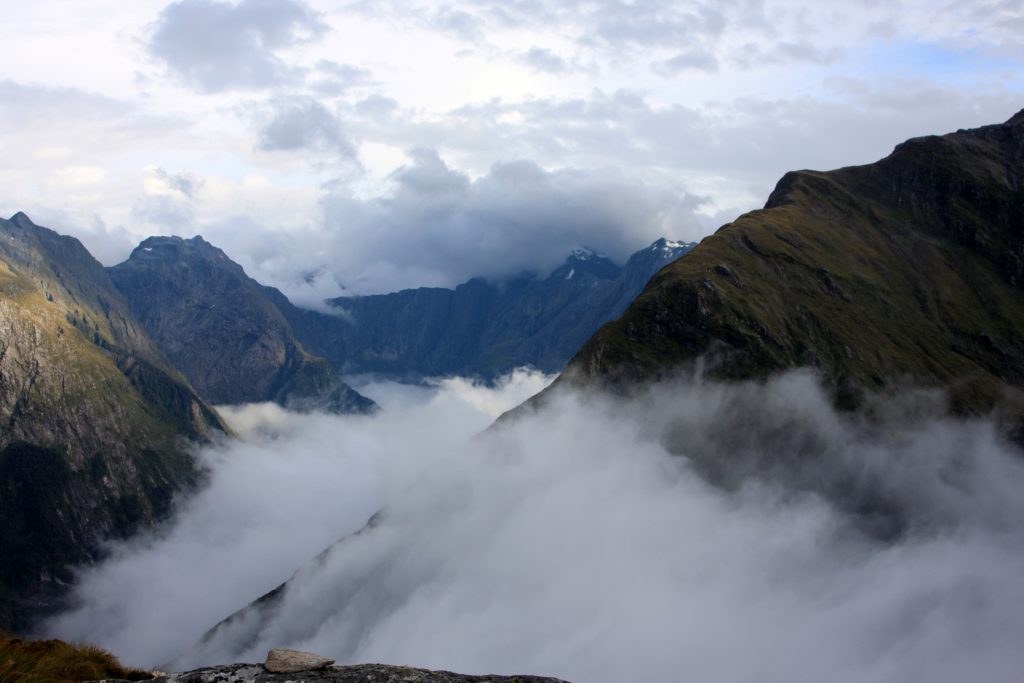 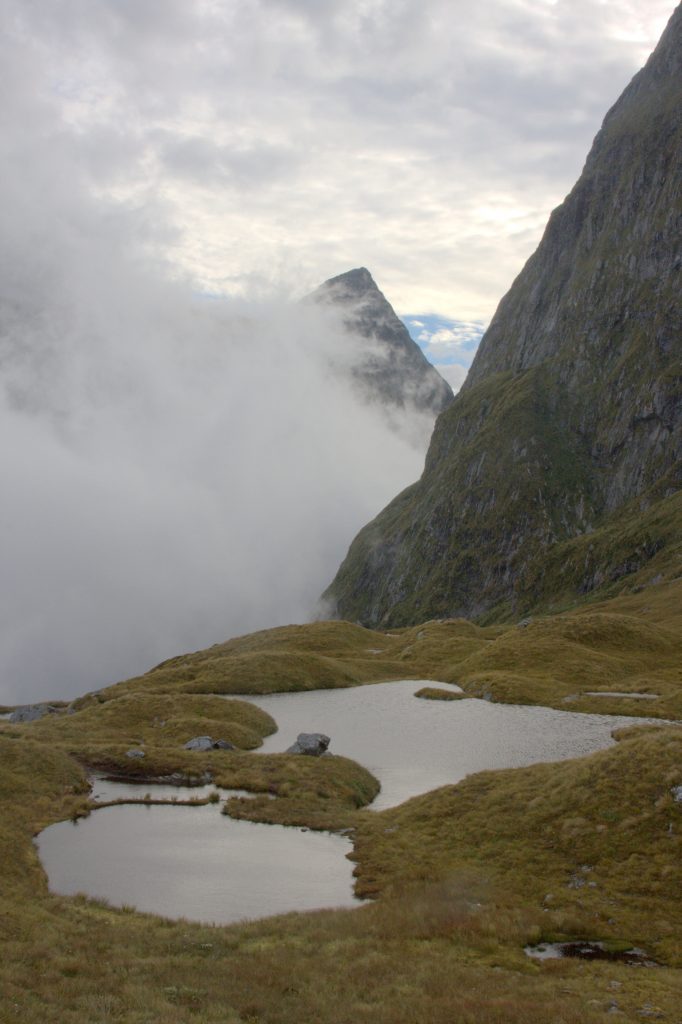 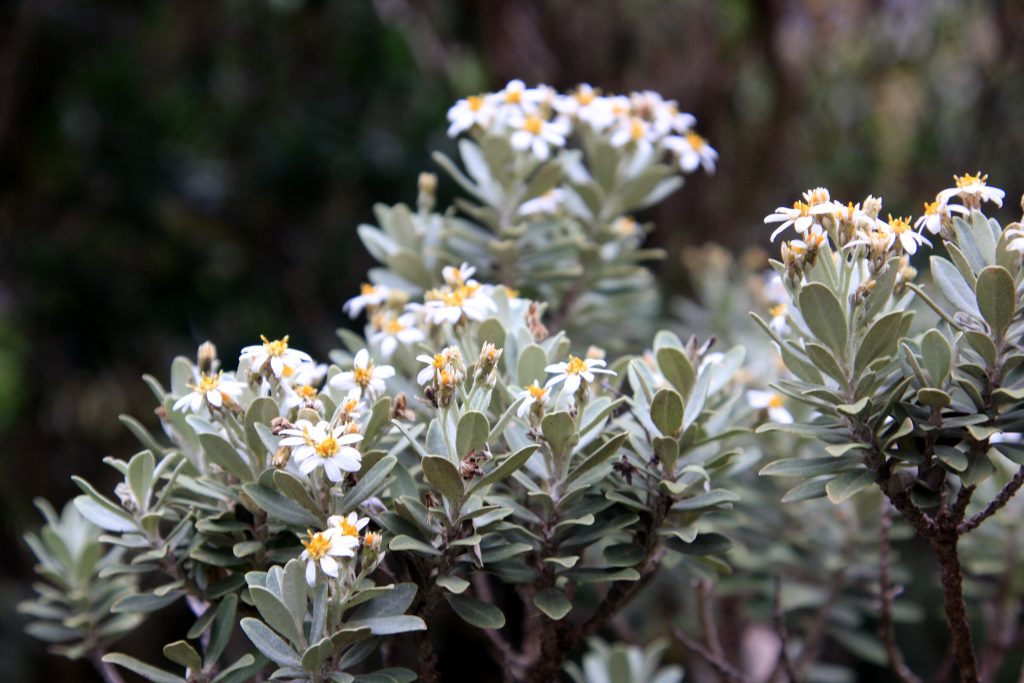 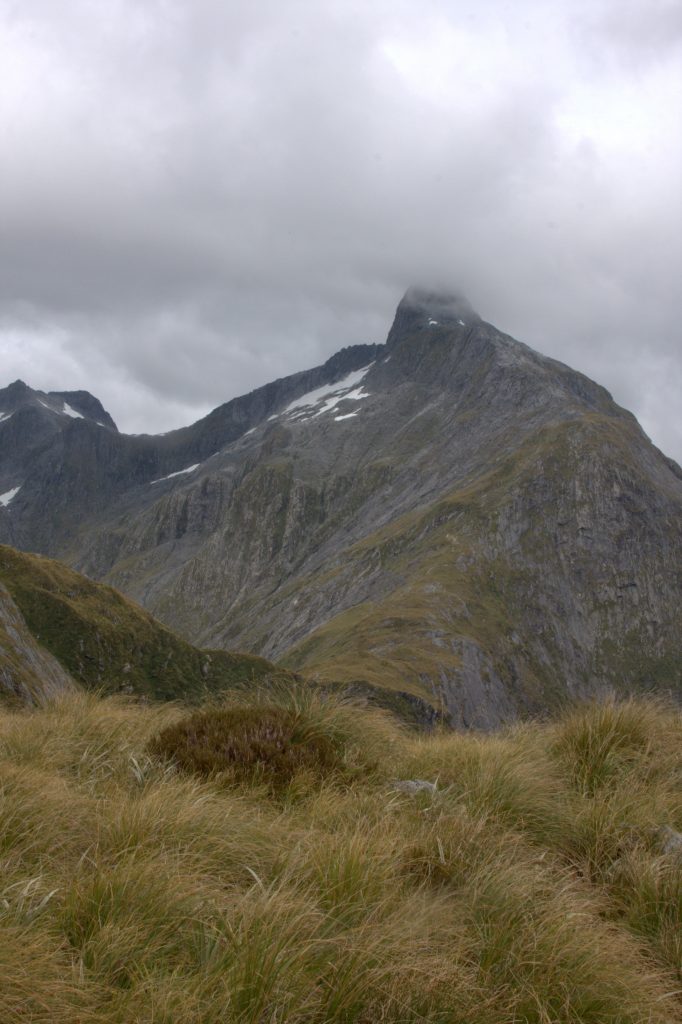 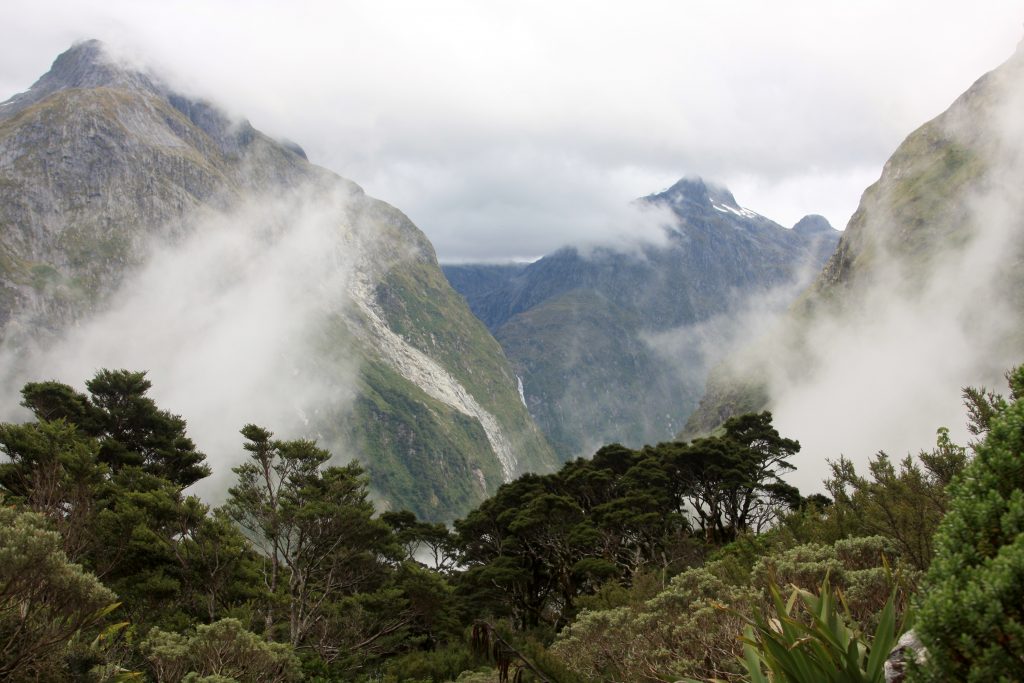 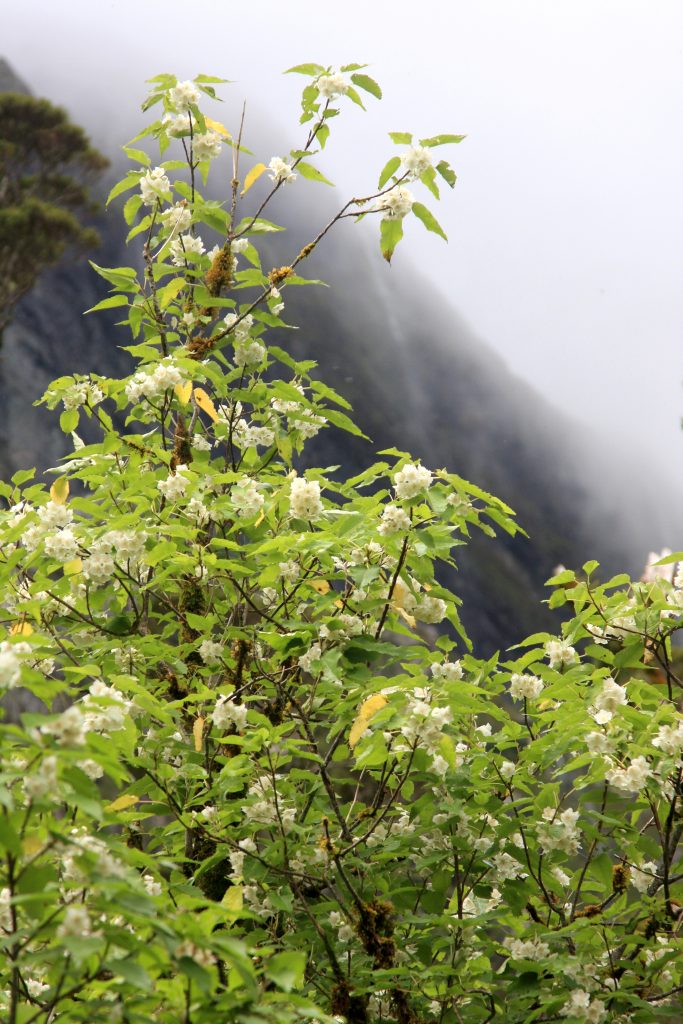 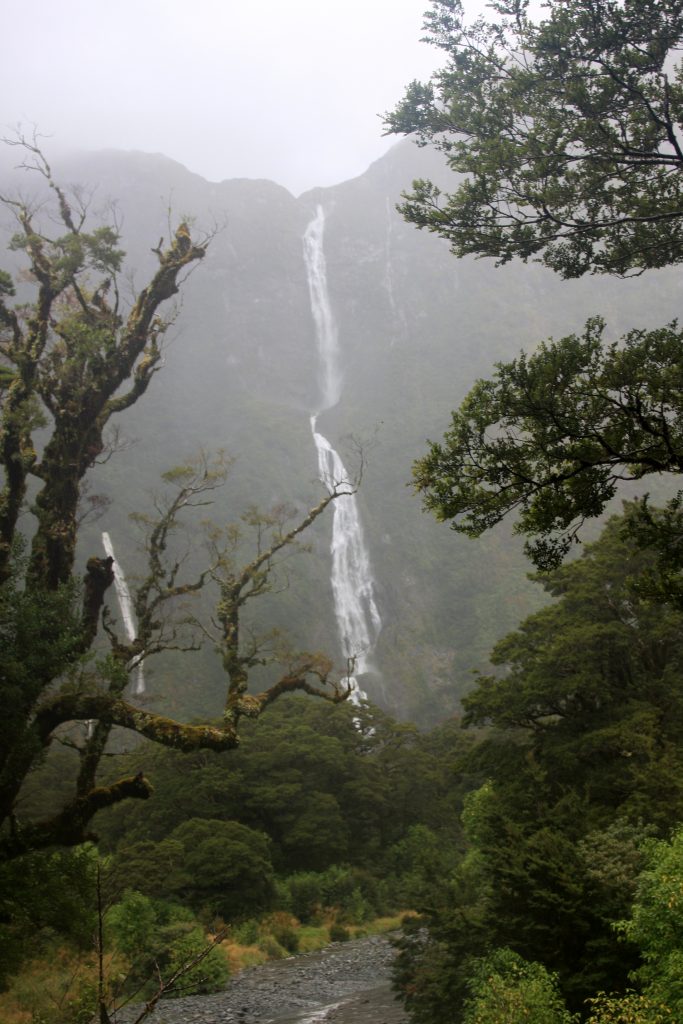