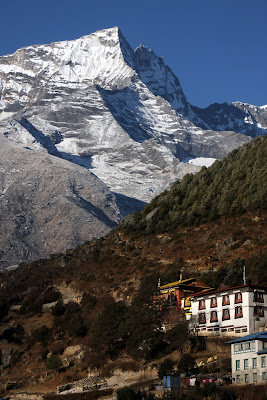 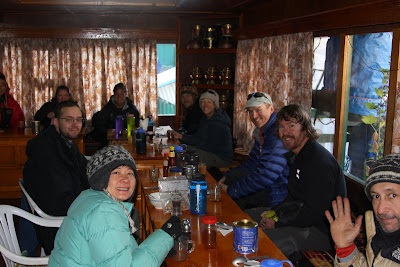 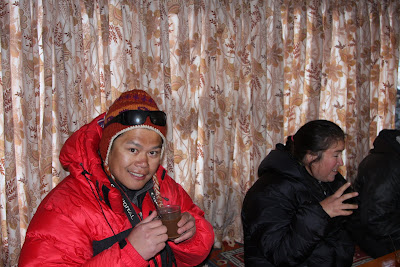 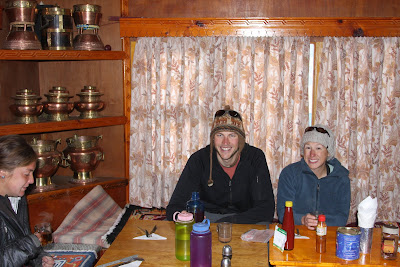 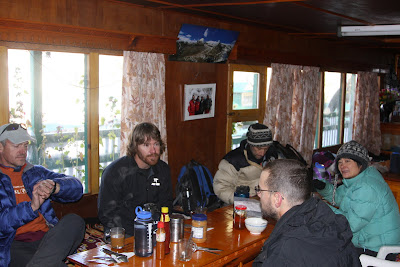 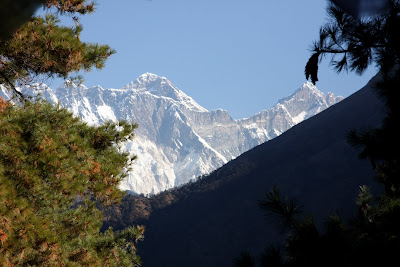 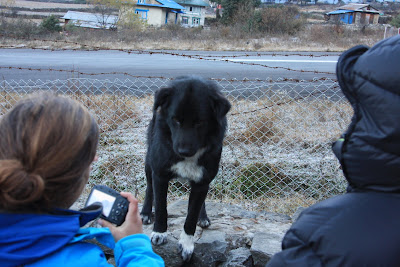 December turned out to be a good time to trek in the Khumba region. The trails and villages were not crowded with Trekkers and the weather was very clear. We had no precipitation whatsoever. We mostly spent our breakfasts, lunches, tea times and dinners in tea rooms, which became our place to refresh ourselves, play cards, write in our journals, read, and socialize. Gio, a physical therapist from Sitka, Alaska was the star of our group who lead various activities in the tea rooms and danced for everyone. We had a very good group of trekkers. Everyone maintained good, positive spirits, and all were eager to help each other. From Namche we hiked back down steeply to the Dudh Koshi River and to Phakding to spend another night. Sitting in the tea room in Phakding, we watched Thupten outside conducting an intense discussion with a group of monks over a piece of religious art rolled out on a picnic table. He told us that he was advising them on the symbolic accuracy of the painting. He was obviously known to be an expert on that subject.
On our second night in Namche on the initial ascent, a stray dog, of the kind that tends to follow Trekkers, slept outside our tent. On our final night in Phakding, a stray snuck under the tent flap and slept in the tent vestibule. From Phakding, we had to climb almost 2,000 feet back to Lukla. It was a beautiful day, and I enjoyed pushing myself to make the climb as fast as I could. I was not nearly the fastest in the group, but I enjoyed the climb. After lunch in Lukla, the group went into the village and enjoyed espresso drinks or Everest beer. During the trek, we were warned about dairy products and alcohol was discouraged at altitude, but now, finished with hiking, we felt free to indulge ourselves. There was a big celebration in the evening with a special dinner. The Nepali crew played a drum and sang Sherpa songs and had us all dancing Sherpa style. Gio led the crew in dancing to more contemporary Bollywood and western music. We all appreciated the special care that the Nepali crew had provided. We spent the night in the nice lodge and in the morning got on the plane to fly back to Kathmandu. The plane took off downhill on the slanted runway, and we watched the snowy peaks recede as we flew over the foothills to the city.