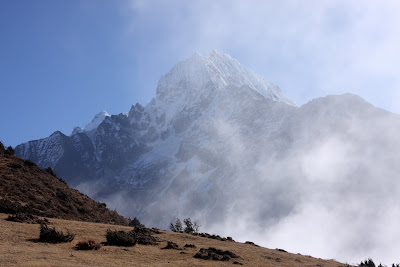 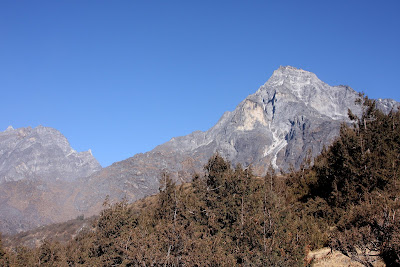 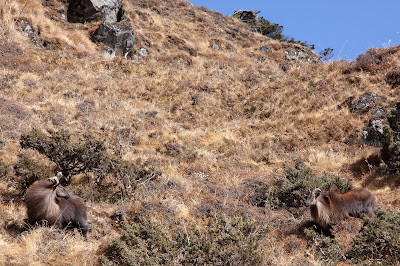 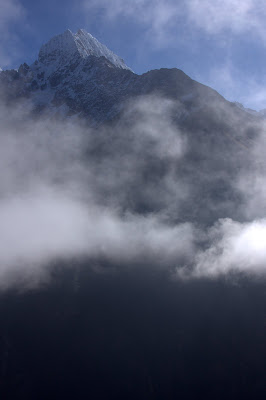 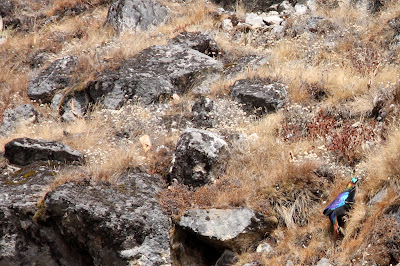 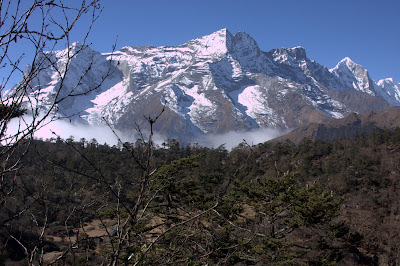 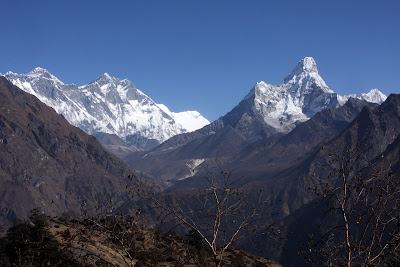 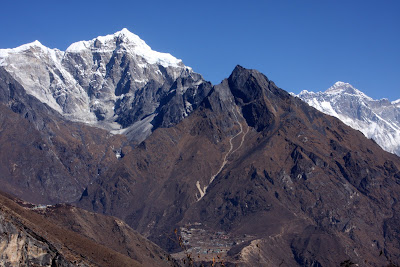 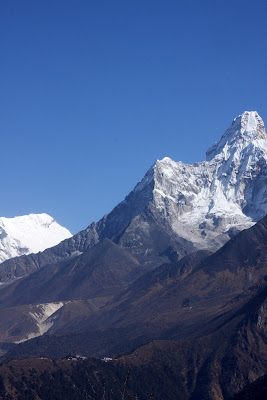 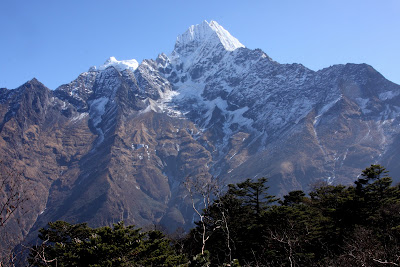 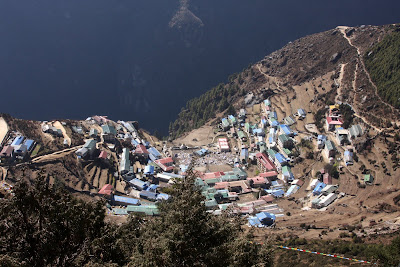 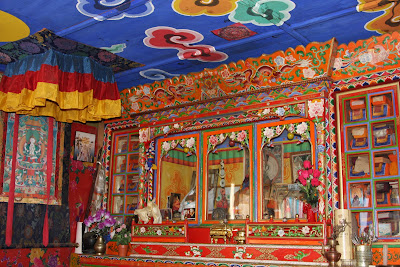 We stayed at Namche two nights at an elevation over 11,000 feet to acclimatize. The first full day we were there we did a wonderful hike from Namche to the Evervest View Hotel and back, which started with a highly aerobic climb up many steps. As we climbed out of the Namche basin, it was overcast with a low ceiling of clouds that hid the mountains. As we continued, we saw blue sky above and the mountains began to appear around us. First was Kumbila, the Sherpa sacred mountain, that is not to be climbed. In ancient times, it was said to be home to the fierce mountain god of the region who was subdued by the Buddhist saint Rimpoche. Next, we saw Kongde and then the beautiful high tower of Ama Dablam. Back to the east were Thamserku and Kangtegu. As we hiked, we saw eagles soaring below us, and at one point, I saw ravens chasing an eagle in front of other-worldly backdrop of mountains and low clouds. Our Sherpa guide pointed out bushy brown Tahr mountain goats grazing above us. There were several large males and a number of females and at times they poised, silhouetted against the sky. We saw a Nepalese pheasant, the national bird, with its iridescent colors. It was completely clear when we got to the balcony of the Everest View Hotel, with its clear view of Ama Dablam and beyond of Everest and her sisters Nuptse and Lhotse. The Hotel was a beautiful, low building constructed by the Japanese with multiple layers to fit the landscape and placed within a lovely stand of evergreens. From the hotel, we could see the village of Pangboche where we would go after Namche. We could also see the monastery of Tengboche which would be on our return route. On the balcony we had tea and took pictures with an entertaining group of Australian trekkers.
Thupten had been a monk at Tengboche starting at age nine before he left the monastery to lead treks. Back in Namche, before lunch he spoke about Tibetan Buddhism and with great concern about the situation in Tibet. After lunch, he took us to his house and showed us his prayer room filled with art and religious artifacts. He is obviously still a devout Buddhist and he showed us religious books, telling us he had to chant 60 of them this year. Thupten learned to paint religious painting in the monastery and he showed us his beautiful paintings. Thupten told us, “A Lama can teach you, but you have to create your own religion yourself.”

sara_v
Enjoying the posts and pics so very much!
Jason
Enjoying all the pics dad. Showing them all to the kids. Maya wants us to take our next vacation in Nepal.