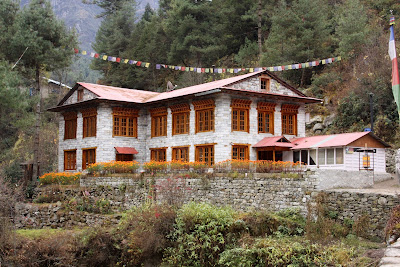 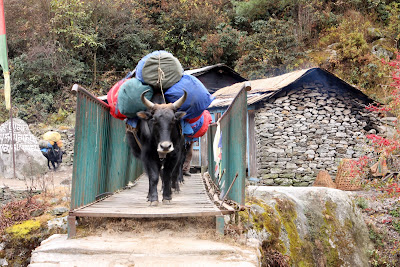 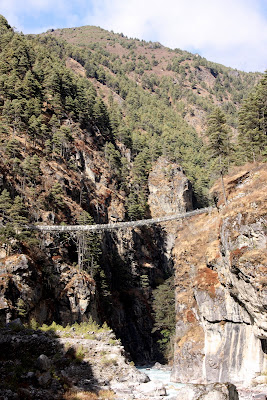 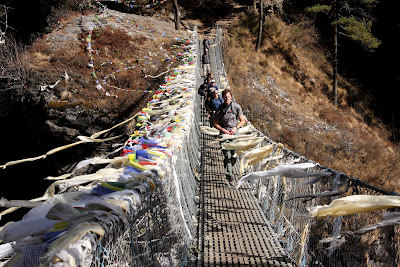 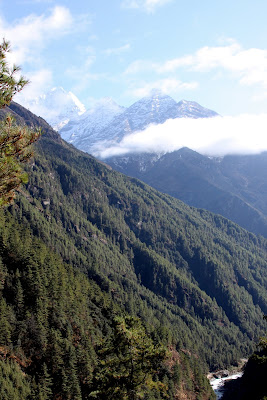 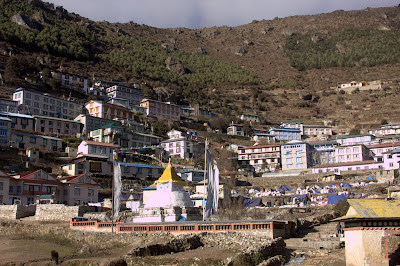 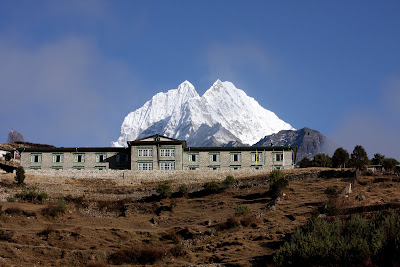 After turning the prayer wheel three times for good luck, we left Pakding heading for Namche. We traveled up the river through lush, mixed deciduous and evergreen forests. The lodge buildings along the way were constructed of stone or brick with finely finished wooden windows and trim. Early in the morning our luggage would pass us on the backs of dzo or what our sherpas called dokyos. These are hybrid animals resulting from the mating of cattle with yaks. Apparently, they are used at the lower altitudes because yaks do not do well below certain altitudes, and suffer heat exhaustion if it gets too warm. As we climbed, we passed caravans of dokyos carrying various goods. We had to stay on the inner side of the trail as they passed so they would not push us over the edge. Several times we crossed the river on the metal suspension bridges that are attached by cables across the river. Crossing on the bridges can be exciting because they shake and sway as you cross them and you can see through the metal floor-slats to the river below. As we hiked, we saw a number of snow-capped peaks high above us including Taboche, Kusum Kangaru, Shishapangma, Takargo, and others. After lunch, as we started to climb out of the river canyon, we crossed a suspension bridge that was particularly high above the river. We climbed steeply through the forest, which had become predominantly evergreen. At a stopping point, we caught our first glimpse of Everest through the trees flanked by her sister mountains Nuptse and Lhotse.
Namche Bazaar is a village that is now the primary center serving trekkers in the Khumbu area. Our leader, Thupten, comes from Namche and has a house there and seems to know everyone. It was clear and warm when we got to Namche and Thamserku towered above, but after tea, the fog rolled down the valley, we could no longer see the mountain and the night was exquisitely cold.