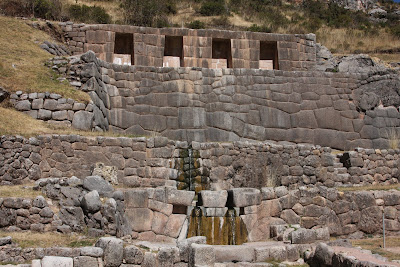 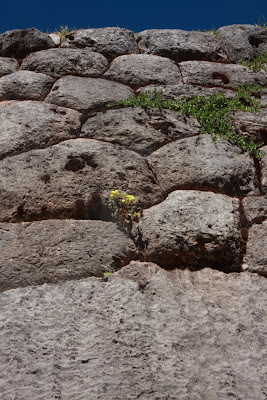 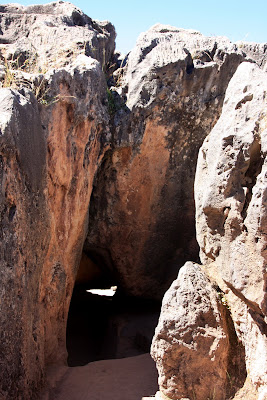 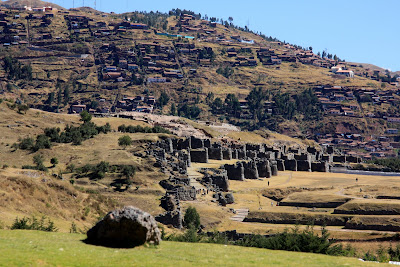 On our first day in Cusco, we visited various Inca ruins on the outskirts of the City. All were old religious sites where various rituals had been practiced. The Inca worshipped the sun, the moon, the mountains and other natural deities, and for them, their whole landscape was filled with divinity. We visited Tambomachay, where a spring had been channeled and water was worshipped as a divinity and likely used for spiritual purification. Puca Pucara, a series of walls located on a scenic point, was likely a lodge for pilgrims. At Qengo, a large limestone boulder was used for ritual purposes, and our guide Alfredo said the stone has a shadow like a puma on the day of the solistice. Alfredo was a slim young man of Quechua origin who was educated and passionate about his culture and who was our chief guide for most of the trip. Qengo also had an interesting cave with a carved stone altar that may have been used for mummification or for animal or human offerings. Caves were generally associated with the worship of Pacha Mama (mother earth). We saw the large religious complex of Sacsayhuaman but did not stop since we would be returning there on another day. It had been the site of a major battle between the Inca and the Spanish, where the Spanish prevailed, despite the fact that Francisco Pizarro’s younger brother Juan was killed in the battle.