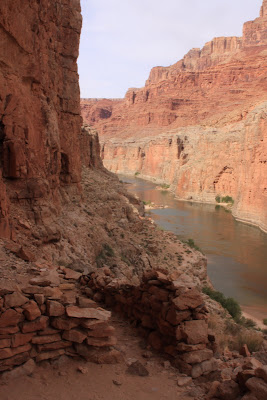 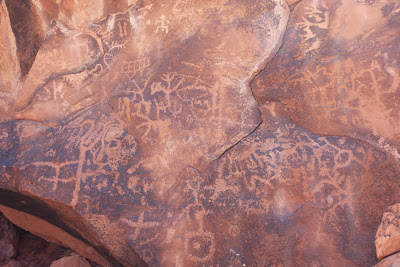 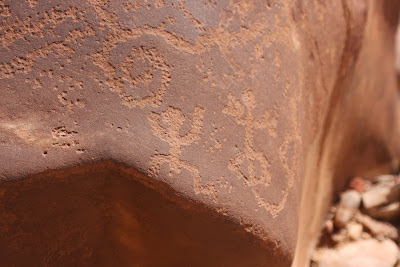 All along the Canyon there were signs of the ancient Pueblo (Anasazi) people. There were the stone foundations of small round dwellings on the benches above the river. There were granaries on cliff ledges and we saw petroglyphs on several boulders. These ancient people had farmed in the riparian sand bars and lived seasonally in the Canyon in small groups. They were obviously a people who were at home in difficult environments. The only modern people who were so at home in the Canyon were our boat crews. They worked from sunrise to sunset, knew the Canyon and the Colorado River in minute detail, and were capable of amazing climbs and hikes up the vertical world of the Canyon walls. But they were modern people. The lead Boatman gave us an eleven day course in Canyon Geology between his bouts of dry wit and obscene jokes. The second boatman moved the first boat downstream while we did loop hikes and hiked the trail in reverse to get the second boat during the time we completed the loop. He was an Ivy League graduate from Aspen who runs rivers all over the world.