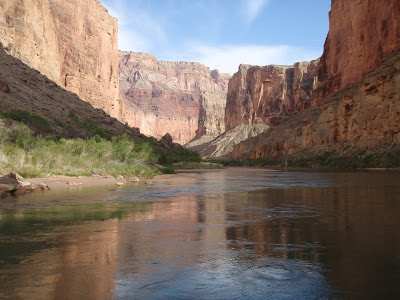 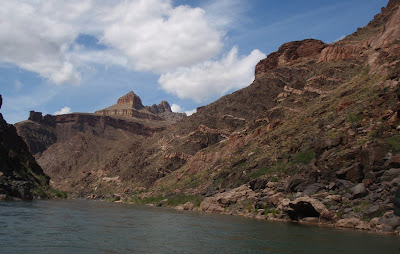 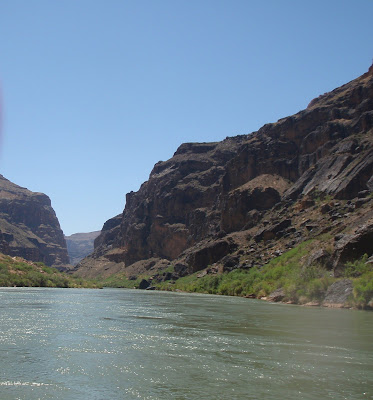 As we traveled the river, the walls seemed to gradually grow in height, although in fact the river cut deeper and deeper going downstream. This was actually due to the uplift of this part of the Colorado Plateau into a curved monocline formation. As the walls seemed to grow, new geologic layers were added from the bottom, each with its own hardness, texture and color. For miles, the Kaibab formation, the rock on the high canyon rim, rose higher into the air. First, the light colored Coconino Sandstone appeared below it. Next the Hermit Formation appeared which was red with horizontal stripes. Cross bedding and erosion created highly sculptured textures on the canyon walls. On the second day, as we traveled on the river from North Canyon, we began to see the heavily carved Redwell Limestone that is such a dominant formation in much of the canyon. After more time on the river, we camped on a lovely beach at South Canyon with a view of the falls at Vaseys Paradise. By that time, we were below a hundred feet of the limestone. As we continued downstream, the Muav Limestone formation appeared with the Redwall Limestone towering 500 feet above it. On the sixth day, we started down the river and soon were in the basement of the Canyon. We were surrounded by the oldest rock, the metamorphic Vishnu Schist, which presented a completely different character. Dark, highly fractured and chaotically carved walls rose sheer above the river. There were fractured, crystalline rocks with bizarre shapes and highly broken pinnacles. They were grey, brown and black with white, volcanic stripes. The dark rocks and overcast skies gave us a slight sense of foreboding. During the expedition the geologic character of the Canyon changed from layered limestone and sandstone to chaotically crystalline, to mixed layers, and finally to dark volcanic basalt. Just above Lava Falls, the most difficult rapid of the trip, the character turned volcanic with dark basalt along the sides of the canyon. As we descended on the river and in elevation, it grew warmer to the point where temperatures were in the nineties, nicely matching the volcanic character of the lower canyon.