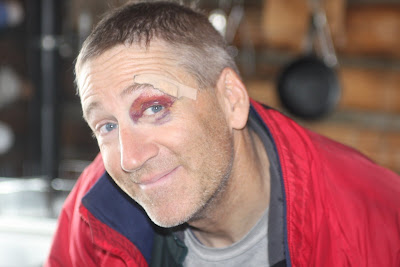 On Thanksgiving Day, I started on a four-day, snowshoe trip to three different 10th Mountain Division Huts, high in the mountains between Leadville and Vail, with a group of twelve people, led by Ryan Ross. We started the hike at Camp Hale, the abandoned training camp for the 10th Mountain Division during World War II. It had yet to snow much in the Colorado Mountains so there was only patchy, light snow at the trailhead. We would start at Camp Hale and finish on Sunday at Ski Cooper, a small ski area at Tennessee pass. We started up the trail but discovered that in places it was covered with a sheet of ice with a light covering of snow, a very treacherous condition. Although a number of us wore Yak Traks or other shoe devices that allow one to walk on ice, people began to slip and fall. I was the rear leader, the last person in the line, as I like to be, and came over a rise to find Ryan lying across the trail with Elizabeth squatting by him to help. Ryan was bleeding from a cut above his eye. Elizabeth performed very efficient first aid, taking complete charge of the situation immediately. After she stopped the bleeding and applied a good pressure bandage, Ryan mentioned continuing on, but Elizabeth said, “Ryan, you have a hole in your head and you have to go down.”
I volunteered with Gaye to take Ryan out. The others hiked on to the Fowler-Hilliard Hut. By the time we got to the emergency room in Vail, Ryan was pale and sleepy. When they took him in to see the Doctor, Gaye and I were able to get a free Thanksgiving dinner in the hospital café. When he got out of the examining room with seven stitches in his eyebrow, Ryan was again his fully energized self. He wanted action. He wanted to go for a hike. Instead, we went to Gaye’s condo in the Vail Lodge and rested. Ryan took on a new mission to work with the concierge to get a helicopter or snow mobile to take us to his “kids” at the hut. After several interesting maneuvers, he was unsuccessful, and we spent a nice evening in Vail.