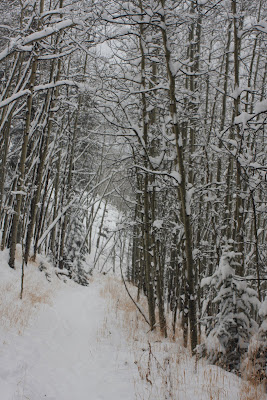 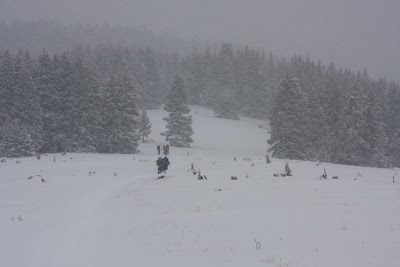 Friday morning, Gaye, Ryan and I drove back to Camp Hale and took another trail for about a mile and a half to a point that would intersect with the route the rest of the group would take to the Jackel Hut. It had snowed the night before so we were able to use snowshoes, and it was sunny at that point. Around lunch time the group found us after hiking down from above, and we began the steep climb to Jackel. It started snowing again just after we started and continued snowing, heavily at times, for the rest of our expedition. The deep powder covered the trail, which was marked by blue triangles nailed to occasional trees. However, the markers were widespread and when you found one, you could not see the next one. The French couple, Tom and Synthia, together with Andy and Rebecca and Justin were generally in the lead. They were excellent at map reading and finding the correct direction. Every so often they had to split up, searching for the next marker, while calling to each other until they found the way. Ken and I were mostly in the back but were able to assist with our GPS units. I was carrying a container of wine that Gaye had brought along with a full meal for twelve people. During the latter part of the day, I struggled to climb with such weight. We arrived at the Jackal Hut in a heavy snow storm.