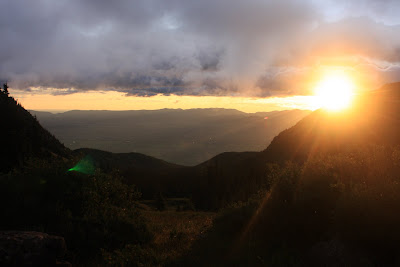 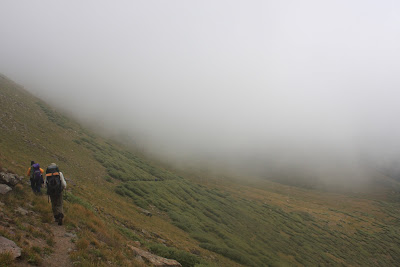 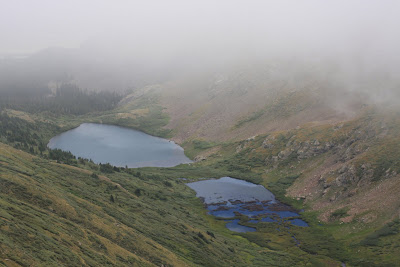 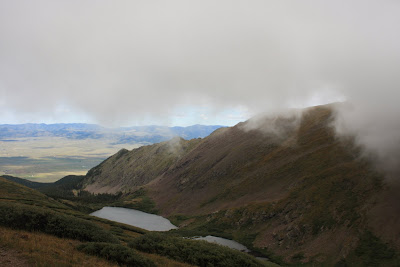 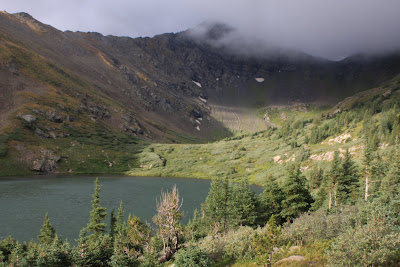 When I awoke in the morning, the campsite was in a cloud and wind was blowing strongly. Wisps of fog were moving rapidly across the lake and for a moment the rising sun illuminated the interior of the cloud with bright, yellow light. From Venable Lake, we had to climb up over two passes and down to Comanche Lake. Mark went down to the valley below to tell the others we were going ahead and returned so we could start. We climbed steeply into the strong wind and dense fog, and after a time, reached a portion where the trail was essentially a narrow ledge on the side of a vertical, rock wall. It was frightening moving along this route while the strong wind pushed against us. Eventually, we saw the top of the first pass above us, and when we stepped onto the top, even stronger gusts of wind struck us in the face. The next portion of the trail was more level, following a grassy contour across the face of the steep ridge. When we reached the second pass and turned to descend, the wind stopped and the fog cleared enough to allow us to see Comanche Lake below. We got to the lake and waited for the rest of the group. By the time they arrived, it had begun to rain, and it rained and the wind blew strongly all afternoon and for most of the night. Because of the rain, I went to bed early and slept for almost ten hours. About 6:30 Monday morning, a strong light pierced my tent and I got up to see the sun briefly shining through the clouds. It was no longer raining but most of the group packed up and headed down toward the trailhead without eating breakfast in hope of avoiding more rain. I ate breakfast, took pictures of the lake, and joined the last of the hikers going down. We could see increasing blue sky behind us as we descended to the trailhead. The Rock Mountains concentrate the powers of the universe and seem indifferent to the fates of human beings. Thus, it is enlightening that some of us find our ecstasy there. It is a profound beauty.