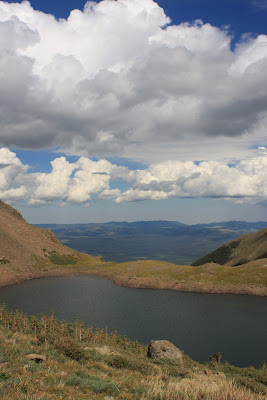 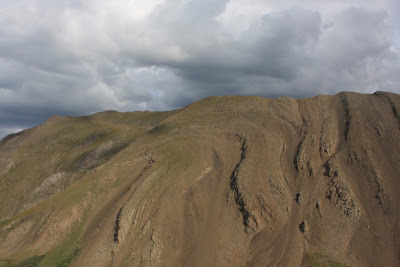 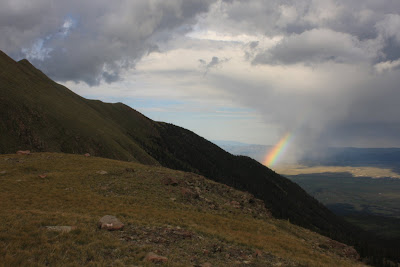 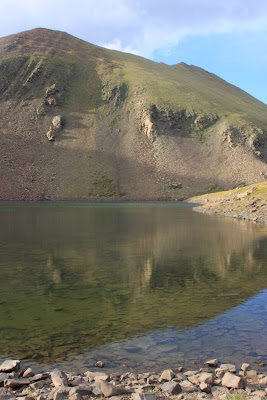 On Saturday, our group of fifteen CMC and CHAOS members began our three day backpack to Venable Lake and Comanche Lake in the Sangre De Cristo Wilderness Area. The Sangre de Cristo Mountains are thrust-fault mountains, which means that they rise steeply above the surrounding valleys. The climb to Venable Lake was a continuous, steady climb. The weather was sunny and midday we reached the top of the large valley just below tree line. From that point, reaching Venable Lake involved climbing a steep five-hundred foot valley wall on a series of switchbacks. It was clear that the lake would be above the protection of tall trees. The group had a serious discussion about changing plans to camp in the valley to avoid the threat of lightening and because it would be easier to find wood for a campfire in the valley. The two lead hikers, Erica and Mark, had already gone ahead to the Lake. It was decided that the group would camp below, but I climbed ahead to the Lake. I established my campsite with Erica and Mark in a nice sheltered, low area surrounded by stunted evergreens and willow bushes. The site had a campfire ring and a large, flat boulder standing upright for protection from the wind. There are actually twin Venable Lakes separated by a low but prominent ridge. From the top of the ridge there are outstanding views of the lakes, of the high peaks around the valley below, and of the expansive Westcliffe valley beyond. As I enjoyed the areas around the lake, members of the group from the valley below began to arrive at the Lake without their camping gear. Two, Rebecca and Colin, took quick swims in the frigid waters of the upper lake.
After dinner and after all those camping below had left, I climbed a knob above the lower lake to take photographs and enjoy the evening and tracked a small rainbow moving across the Westcliffe Valley in the distance. Later, I returned to the campsite and Erica and Mark had found wood for a fire, and while the fire burned, Erica read chapters from the Grapes of Wrath. The story of the Joads above twelve-thousand feet: what wonderful entertainment that was. Hearing Steinbeck out loud, makes one realize what a witty, talented and anthropological writer he was. The Grapes of Wrath demonstrates a clear grasp of Oklahoma linguistics and provides a thorough cultural inventory. The wind blew strongly during the night, but I was well-sheltered in my tent and slept well.